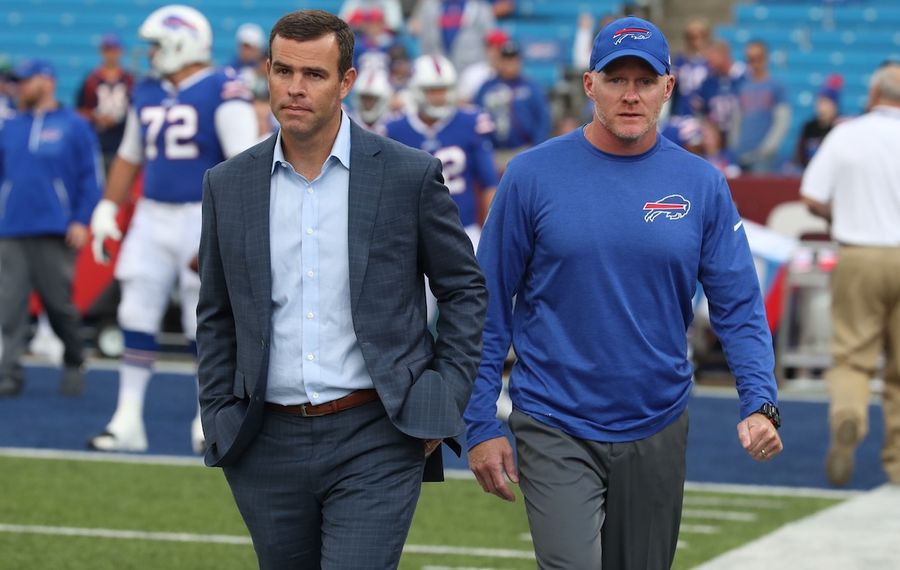 Last year, the Bills were primarily focused on finding their long-term quarterback answer and traded up twice to make Josh Allen the seventh overall pick.

On Thursday night, they watched as two QB-needy clubs with the Nos. 1 and 6 choices, the Arizona Cardinals and New York Giants, selected their long-term answers in Oklahoma’s Kyler Murray and Duke’s Daniel Jones. Then, the Bills celebrated as those moves helped push their top target, defensive tackle Ed Oliver, down to them at No. 9.

“I think the players that we’ve brought in really start to feel and embrace what it means to play for this team and the fan base.”

The talk is a bit different in Arizona and New York.

The Cardinals’ decision to invest the top overall pick in Murray and trade away Josh Rosen, the first-round quarterback they acquired last year, is drawing a great deal of second guessing. At 5-foot-10, Murray is seen as being too short. He only started for one season in college, after which he returned money he received as a signing bonus from the Oakland A’s. With baseball still an option, questions have been raised about just how strong his commitment to football will continue to be, especially if things continue to go wrong with the woeful Cardinals. And they’re trying this experiment with a rookie coach, Kliff Kingsbury, whose wide-open passing attack has yet to be proven it can work in the NFL.

Then, there are the Giants. Their fans were stunned that Jones, who most analysts did not rate as a first-round pick, was the choice of General Manager Dave Gettleman to be the eventual successor to Eli Manning. They were even more dumbfounded when Gettleman said he fell in “full-bloom love” for Jones after watching him in three series at the Senior Bowl, and that the rookie could end up sitting for three years the way Aaron Rodgers did behind Brett Favre in Green Bay.

Day 3 recap: Bills go heavy on defense, double down on tight end to close out draft

Desperate teams do desperate things. That wasn’t the Bills this year. When you have what you firmly believe is your main cog in place, you can pretty much sit back and allow the draft to come to you.

The Bills were thoroughly convinced they they were working from a position of strength.

“It was easier coming in, knowing we weren’t having to start from 21-22 to try and go up and get Josh, who we eventually did,” Beane said. “This year, we stayed patient and got Ed and we were very excited, in the second round, to get Cody [Ford].”

The Bills did exactly that, functioning with the confidence and purpose of an organization that believes it has evolved. In five months, they get to begin proving it and Allen gets to begin showing that he is the transformative player the Bills are convinced he will become.

Sure, they made a couple of trades. However, parting with a fifth-round pick to move up a couple of spots in the second round for offensive tackle Ford and a pair of fourths to re-enter the third round for tight end Dawson Knox weren’t cases of scrambling for help. Having already added 18 free agents, it was fair to think the 10 selections with which the Bills entered the draft wound end up being two too many.

Of course, they were ready to alter their thinking had things played out differently than they did within the first half-dozen picks.

“In the mock scenarios we did, only one quarterback went, which was Kyler. It wasn’t as favorable for us,” Beane said. “So in those scenarios, we were talking about, potentially, if certain guys were all gone, we would want to move back. Fortunately, we had some teams that we could have moved back with, that wanted that pick. So I felt we were in a good spot, if we didn’t get an Ed Oliver type, to move back and accumulate picks.”

An argument could be made that the Bills should have selected a receiver. A total of 27 were taken among the 254 players drafted.

But neither Beane nor the rest of the Bills’ player-personnel staff believed there was a pass-catcher with a higher grade than players available at other positions when their picks arrived. One could challenge the notion that 5-7 running back Devin Singletary, from a small program like Florida Atlantic, was the better option in the 74th overall spot in the third round than the many receivers undrafted at that point.

But the Bills spent months assembling their draft board and they remained true to their own opinions, not mine or yours or anyone else’s.

“We had guys in place on the board that we thought would have really added some different elements (to the team’s receiving corps),” Beane said. “There were some size guys, speed guys, some inside, some outside. But again, we just follow the board. We set the board up and we follow it and just try and draft good football players.

Following the board tends to make sense, particularly when you don’t have to go chasing after a franchise quarterback.