Paul Maurer was walking on a cracked sidewalk along South Park Avenue. He passed a rust-colored brick building housing five Mister Softee ice-cream trucks, a trailer for a party rental business sitting in an empty lot, and a pile of cracked concrete and rocks wrapped in yellow caution tape.

But Maurer didn't see any of this. Nor did he seem to be feeling the bite of the wind that’s tousling his hair on this spring day. He may as well be on a walk in the park.

“That’s an oak,” he said, pointing to a tree planted in a square of soil along this South Buffalo thoroughfare. “That’s a London plane tree,” he added a few steps later, pointing to the two-toned, camouflage bark.

“I’m not an arborist,” Maurer added with a light laugh. “Don’t expect too much out of me.”

It's true. He's not an arborist. But he is responsible for planting 30,000 trees.

Maurer didn’t do it alone. But as the co-founder and chair of Re-Tree Western New York, Maurer has been the driving force behind a 12-year effort to alleviate the effects of an ice and snowstorm that wreaked havoc and ruined tens of thousands of trees in the Buffalo area. The project will reach its goal on Friday, when that 30,000th tree is planted during a 10:30 a.m. ceremony at Canalside.

“Once I go into something, I persist,” Maurer said. “I don’t give up too easily.”

Even if it takes more than twice the time he thought it would.

The 64-year-old, who runs his own marketing and events company after a long career in radio sales, started this tree-planting initiative in the fall of 2006.

In October of that year, a freak storm dumped damp snow across large swaths of Western New York. The heavy flakes clumped and collected on trees that still had leaves. Branches creaked and cracked and trees toppled, down electric lines and turning streets into dangerous obstacle courses. Thousands of households and businesses lost power.

Utility crews were able to fix that within weeks, but there was a more lasting damage: All told, 57,000 trees were destroyed.

Maurer, who worked in sales at the time for the radio company Citadel (now Cumulus), saw it in his own East Amherst neighborhood.

“At the corner of our street were some big maples that really got pulverized,” he said.

In the days immediately following the storm, Maurer and others from the radio station 97 Rock brought coffee and doughnuts to the visiting utility crews. But realizing this was a rare “hundred-year storm” with effects that could last just as long, Maurer decided to take action in a more permanent way. Tapping into this network of contacts as a sales executive, he ultimately met lawyer David Colligan and they co-founded Re-Tree Western New York, with the stated goal of planting 30,000 trees over the next five years.

“It was too ambitious,” Maurer reflected during his walk along South Park Avenue this week. But he doesn’t seem troubled by that; just patient. 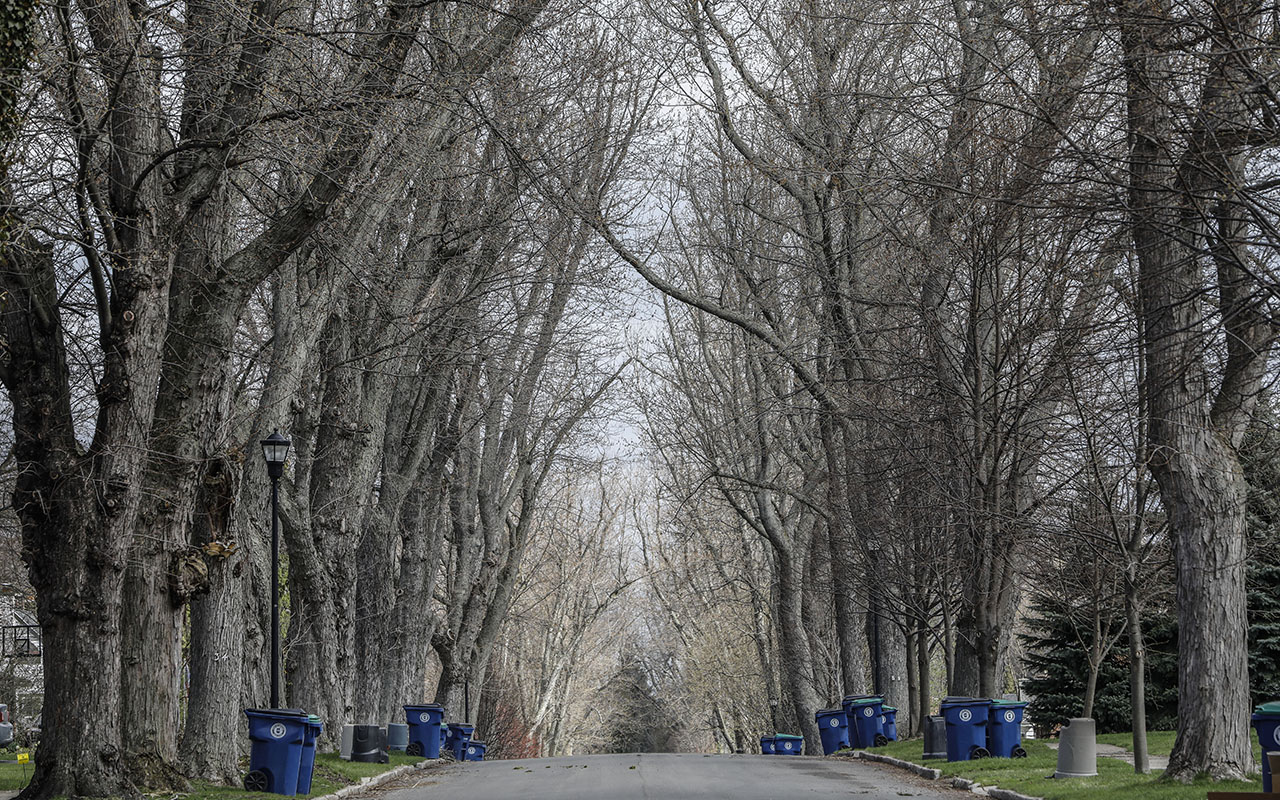 The canopy of silver maples forms an archway over Burbank Drive in Amherst on Wednesday, April 24, 2019. (Derek Gee/Buffalo News)

Re-Tree got off to a strong start. One of Maurer and Colligan’s earliest meetings was with Stanford Lipsey, the late publisher of The Buffalo News, who asked, “What do you need?”

They gave Lipsey an amount – $50,000 to buy the first round of trees – and he stood up to grab his checkbook.

Ultimately, Lipsey donated personal funds, put the newspaper behind the effort, and sent a letter to several of his wealthy, influential friends in the Buffalo business community asking for their donations.

“A poet has written that ‘only God can make a tree,’ but together we can see to it that some day soon, 30,000 more will beautify our hometown again,” Lipsey wrote to Robert Wilmers, then the chairman of M&T Bank, and presumably said the same in his letters to the others. “Please call me with your thinking on this subject.”

Progress in the suburbs happened relatively quickly, with Re-Tree and municipalities successfully planting new trees where ones were lost. Re-Tree’s goal from the start has been for municipalities to match Re-Tree’s donations one for one, so the 30,000 Re-Tree trees are doubled to 60,000.

The work in the city moved more slowly, but the real challenge for Re-Tree reaching its five-year mark came from money and memory. As time passed, people’s recollections of that October storm grew more distant.

“As we got farther away from the storm,” Maurer said, “it was less and less on people’s minds, naturally: ‘That was so long ago, I forgot about it.’ The money starts to dry up …

“It could be a little frustrating.”

That dynamic was made more complicated by the 2008 financial crash.

“We didn’t feel like we could beg for money,” Maurer said. “We’re not a charity that is absolutely of utmost importance to our area. Certainly I’d rather not go to somebody and say, ‘Don’t give that money to Children’s Hospital, leukemia or March of Dimes, and give it to me, because I’m going to plant some trees.’ ”

The corner of Burbank Drive and Main Street in Snyder, pictured in 2006, left, and on Wednesday, right. (Harry Scull Jr. and Derek Gee/Buffalo News)

The Re-Tree organizers decided that slowing down would be acceptable, and even planting a few hundred trees – just a tiny fraction of the overall goal – could be viewed as progress. That’s what happened here on South Park Avenue: On one morning 10 years ago, volunteers and residents teamed up to plan 360 trees along a two-mile stretch of the road. Today, it adds a park-like feel to what otherwise would be a largely gray, concrete-and-asphalt landscape.

“We adjusted as went along,” said Maurer, who went to work for the radio company Entercom in 2010, and started his own company a year ago.

The leadership group of Re-Tree adjusted, too, with one constant at the top: Maurer.

“He’s really been the driving force,” said Cindy Kincaide, director of industry relations for Visit Buffalo Niagara and a longtime member of Re-Tree. Kincaide was working in marketing for The Buffalo News when Re-Tree began and was involved in the effort from the start.

"If Paul weren’t there,” she said, “I’m not sure that Re-Tree would have continued.”

Nor is it over. Re-Tree, which operates under the umbrella of the nonprofit WNY Green Fund, has raised $1.5 million since its inception to pay for its 30,000 trees and the supplies needed to plant them.

Next up is keeping them growing.

The Re-Tree organizers learned long ago that the best practice for keeping what they call “street trees” healthy is by having residents help plant them, and teaching those people how to maintain them.

“I’m still going to do this, maybe even more so,” he said, walking up to an empty plot of soil in front of in a church. There once was a tree here — but no more.

“This has to be replaced,” he said. “It’s too bad we lost it. Who knows why? But there always will be that replacement that has to be done.”