The idea to produce the musical, “1776,” with an all-female cast proves to be delightful, and even mischievously subversive, at O’Connell & Company in Snyder. The 1969 show tells the story of John Adams’ campaign to persuade members of the Continental Congress to sign the Declaration of Independence. The somewhat fictionalized tale gains a boost of contemporary relevance when the founding fathers, who declared that all men were created equal without the slightest thought of women’s suffrage, are played by women. The result is a lot of fun.

Director Steve Vaughan guides the large cast through this often-irreverent retelling of history with efficiency and humor. Donald R. Jenczka has bravely taken the challenge of musical direction in a production that required a total shift of vocal ranges. Terri Filips Vaughan has done the choreography. Matt Myers has designed the set.

The success of Lin Manuel Miranda’s “Hamilton,” which uses a multiracial cast to represent the Founding Fathers, has opened new doors for others to look back across time and identify with men who, “1776” reminds us, were imperfect, but nonetheless envisioned “Americans, all Americans, free forever more.” In a nod to “Hamilton,” a recorded preshow announcement reminds us that “1776” will take us to “the room where it really happened.” 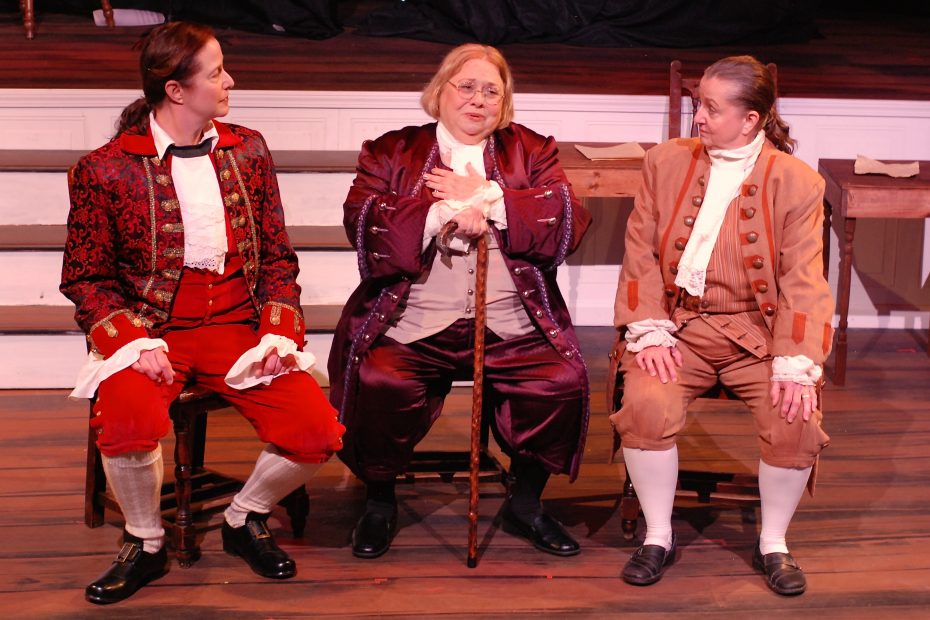 Now, the stirring opening number, “Sit Down, John,” with its robust chorus of male voices, is radically transformed by female voices. Already a statement has been made.

The contrast between male and female voices is not exploited as fully in this production as one might expect. It is not until the curtain call that we actually hear a full throttle chorus of legit female voices. At another moment, it is startling and wonderful when Emily Yancey, as South Carolina’s Edward Rutledge, unleashes her soaring soprano on the terrifying “Molasses to Rum.”

The casting of splendid Mary Craig, an African-American actor, as conservative John Dickinson of Pennsylvania, adds an additional opportunity for irony and reflection. As played by Craig, Dickinson’s entire demeanor changes after “Molasses to Rum” exposes the hypocrisy of the slave trade.

There have been tweaks to the script. Characters have been combined or cut. “Mama Look Sharp,” originally sung by the Courier from George Washington with harmonies by McNair and the Leather Apron, has been reassigned to McNair. The character of elderly Caesar Rodney of Delaware, who arrives at the last-possible moment to cast his vote, is also cut, obliging fellow Delaware delegate, Thomas McKean, played by Priscilla Young-Anker, to do double duty.

These revisions provide a brisk and more streamlined evening. We lose, however, the sense of a Continental Congress removed from an outside world. Women and the war always loom large in this show as external voices. As originally performed in 1969, “Mama Look Sharp” was a pointed and deliberate anti-war number sung to an audience that was all too aware of the horror in Vietnam. That audience would also have recognized the lyric, “ 'Don't you know there's a war on?’ say the tradesmen with a grin,” as a wry anachronistic reference to World War II, another moment when women were left to keep the home fires burning. This production augments the moment with a poignant ballet by Terri Filips Vaughan.

Jo Mielziner’s set for the original 1969 production, which I confess I saw (indeed I also saw the 1997 revival), employed a scrim that became a gigantic Declaration of Independence in the show’s final moments, and provided marvelous fluidity in the transitions between scenes. For their luscious duets, John and Abigail Adams simply stood on opposite sides of the stage. They gravitated toward each other but could never touch, emphasizing their yearning for each other. Here, Abigail is relegated to a remote Juliet balcony and the moments were somewhat diminished. (Myers’ set is otherwise perfect). The duets are still glorious.

This production of “1776” is refreshing, insightful and a rollicking good time.