Decorators’ Show House offers ideas that appeal not just to humans but also to the dogs in their lives. That’s right, the site of this eagerly anticipated community fundraiser has two canine-inspired spaces.

It’s all part of the 20th Decorators’ Show House, the Palmer Centennial House at 288 Lincoln Parkway that begins its three-week run April 27 and continues through May 19. (See below for details.)

Decorators’ Show House, which is cosponsored by the Junior League of Buffalo and The Buffalo News, has taken place every other year since 1981.

This year’s house features three floors of professionally decorated rooms and spaces; more than 100 windows; multiple sunrooms; in-ground pool; outdoor kitchen; She Shed; landscaping, plus those dog-themed spaces (one indoors, one out). There’s a lot to see.

• Wallpaper makes a big showing at Show House. Just a few examples (but there are others): Buffalo Paint & Wallpaper selected a Farrow & Ball “Lotus” pattern for the “Beauty, Imagination and Order” living room, below. Decorator Laura Fulciniti described it as “period-appropriate.” 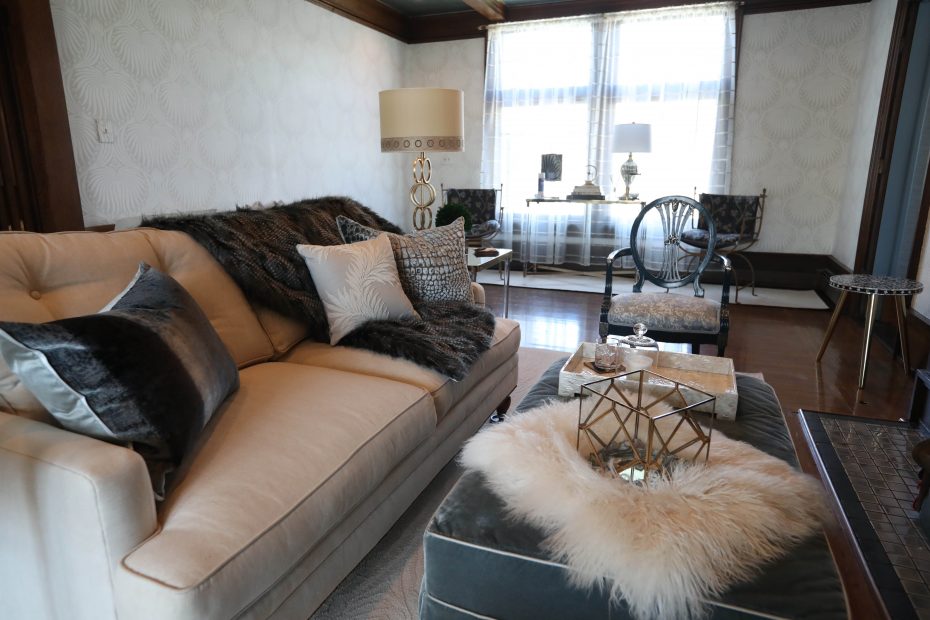 Red Disk has four designs in the house – including some from its collection that reinterprets the 1920s wallpaper designs by renowned American artist Charles E. Burchfield.

Members of the Interior Design Association of Western New York chose a York wallcovering with dragon motifs for the "Palladian Style" room adjoining the kitchen.

Carol Schaper, one of the designers, said that “Game of Thrones” fans will love it.

• Area students are once again involved in Decorators’ Show House. Under the guidance of faculty adviser Sandra Reicis, Villa Maria College students from the interior design department created “Lost in Wonderland,” an Alice in Wonderland-themed children’s space on the third-floor landing. Found here: a student-made table that is illuminated and set for a Mad Hatter’s tea party; hanging fused glass butterflies; framed, hand-replicated original book illustrations; twinkle lights and greenery in the windows, and more. 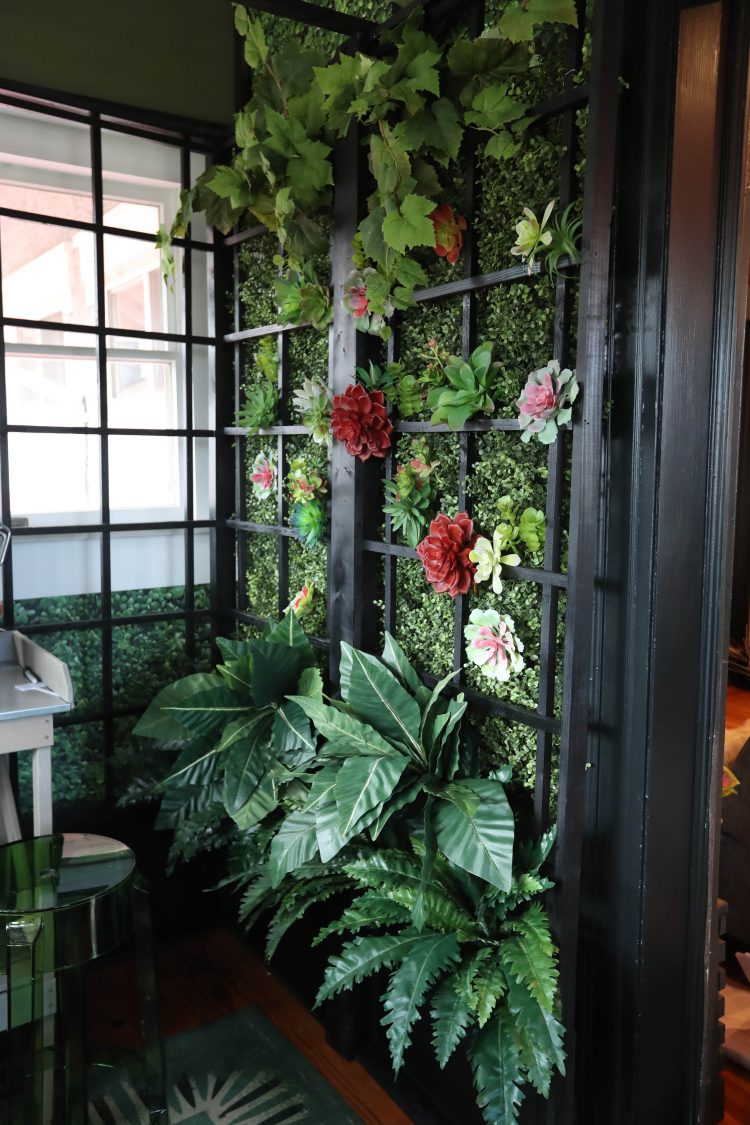 Michael P Design and Room transformed a second-floor sunroom into a potting  studio/sitting room, left, with digitally produced boxwood wallpaper along with wood panels inspired by the ironwork found in old English conservatories.

• As usual, there are plenty of new ideas to see at Decorators’ Show House – even those inspired by old ones. In planning his “Surface Details” room, Tim Waziak, of Timothy Aaron Creative, was inspired by an ancient Japanese technique called Shou Sugi Ban, which preserves wood by charring it.

He used the technique on pine and installed it in the sitting room, shiplap style. The goal, he said, was to visually warm up the room and “make it a comfortable space to be in.”

The mostly black room also features vintage furnishings including a pair of black Windsor chairs, a mirror and a gun storage box to which he added a base to make it a table.

Black, in fact, is another trend at Decorators’ Show House.

The ceiling of the third-floor “Be My Guest” bedroom, designed by Julie DeAngelo of Bridge Interiors, features a ceiling painted “Aperture,” by C2 Paint. The walls are “Darwin,” also by C2 Paint, which Tammy Davis of Colvin Draperies described as the color of “frothy chocolate milk.” Colvin Draperies supplied the Roman shades, upholstered headboard and custom pillows in this room.

Some house history: The home was designed by architect Ulysses G. Orr around 1910 when the street was known as North Lincoln Boulevard. It was built for the family of William Palmer, a prominent florist in Buffalo. The house was last sold in 1996 for $305,000 and will be on the market.

A history of the home, list of decorators, roundup of past Show Houses, raffle details and more are online at jlbuffalo.org or in the Show House booklet. Since 1981, Decorators’ Show House has raised more than $4 million to benefit the Western New York community.

Location: 288 Lincoln Parkway, at the corner of Chatham Avenue.

Tickets: $25 at the door or online at jlbuffalo.org.

Restrictions: No infants or children younger than 10. The event is not wheelchair-accessible. There is no elevator or public restroom. No food or drink allowed in the house.

Two tips: Wear comfortable shoes. Lines tend to be shorter at the beginning of the three-week run so you may want to attend sooner rather than later.

In addition: The 1919 Emporium shop is set up in the garage and features gifts and items from local artisans and crafters. The Wegmans Grab-and-Go Café is also here. Many of the items in the Show House itself are available for sale but, except for the cash-and-carry artwork in the Art Loft, will remain in the house until after Show House closes. Photography is allowed this year, and visitors are encouraged to share comments and photos on social media with #jlbshowhouse19. 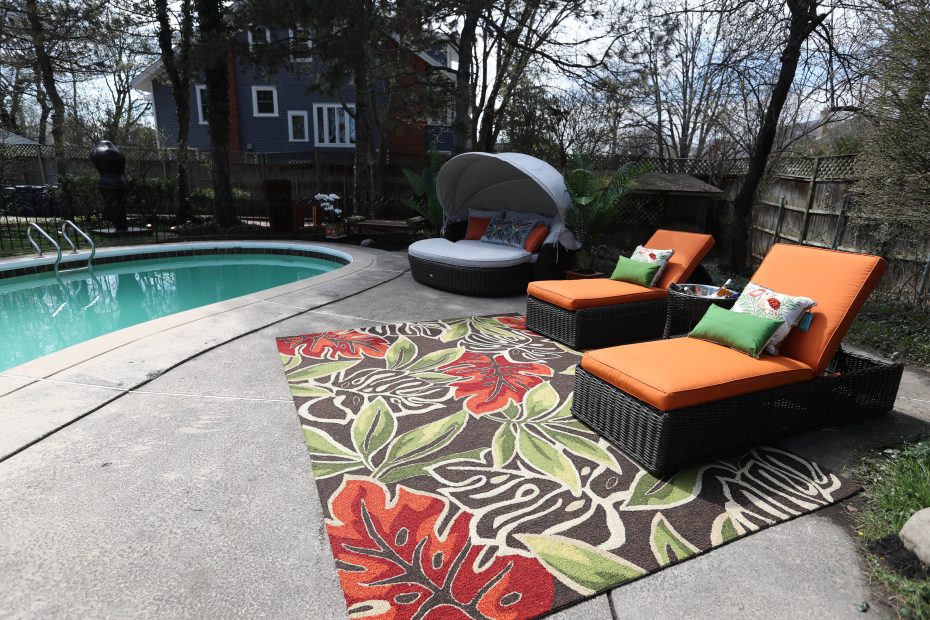 There's plenty to see outdoors as well. Above, the "Into the Rainforest" poolside tropical oasis decorated by the Arthur's Home Furnishings team. (Sharon Cantillon/Buffalo News)

* The Buffalo News visited the Palmer Centennial House in February before the transformation by local design professionals began. Here is the story and a link to a gallery of "before" photos:

Take a sneak peek of the future Decorators' Show House