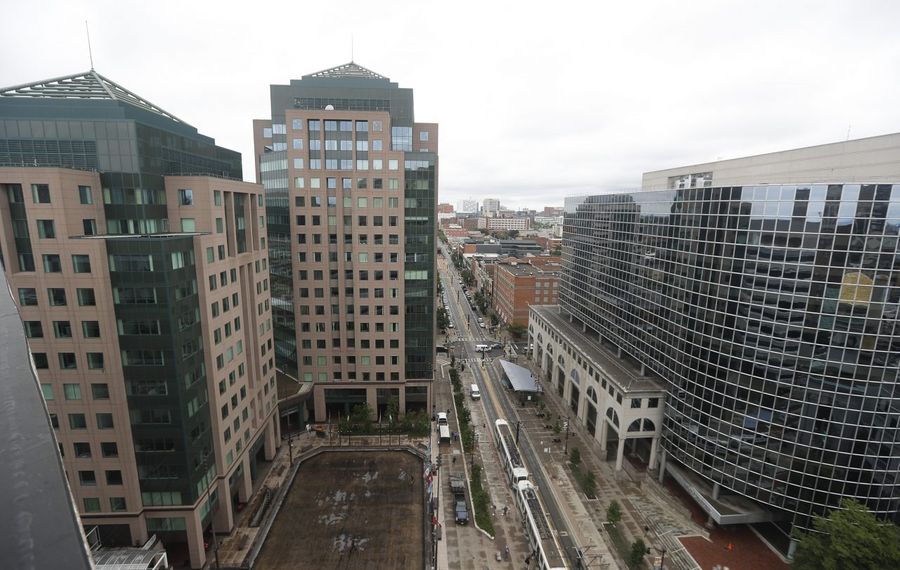 CannonDesign, one of the region's leading architectural firms, is moving to downtown Buffalo after nearly half a century on Grand Island.

The nationally known design firm plans to occupy just under 35,000 square feet of space at 40-50 Fountain Plaza, taking up the entire mezzanine level of the two-building complex, according to an industry source familiar with the move. The firm has not yet signed a formal lease, but officials expect that to happen soon.

Cannon will initially move to temporary quarters on at least two upper floors of the downtown facility, while it redesigns its new space above the lobby level. That first relocation will take place by August, with the final move expected by this time next year, the source said.

About 180 workers will move from Cannon's longtime headquarters at 2170 Whitehaven Road, which it has occupied since 1972. At one time, it had a downtown Buffalo office on Pearl Street, but kept its main office on Grand Island because the Cannon family was rooted in Niagara Falls. In all, the firm now has more than 1,100 employees in 19 regional offices spread across the United States and Canada.

Cannon spokesman Christopher Whitcomb declined to comment on the move, which has long been rumored since Cannon began exploring options for relocation. The firm has also been working on various options for its existing building – including a possible sale to Grand Island for use as the new town hall.

“It’s disappointing that a resident business of the island that has been there for so many years is leaving,” said Grand Island Town Supervisor Nathan McMurray. “We understand the factors that are driving them to leave. They have a lot of work in Buffalo. It’s been my goal to turn a sad moment into an opportunity for Grand Island, and the leadership at Cannon has been very helpful.”

However, McMurray’s effort has been held up by hesitant Town Board members. “I know Cannon has been looking at other opportunities, as well,” McMurray said.

McMurray said he plans to submit a proposal at next week’s board meeting to enter into “serious negotiations” with Cannon, but worries it may be too late.

Another source said Cannon was offered a long-term lease for the facility by a local logistics, telemarketing or pharmaceutical company. The industry source said the design firm is close to finalizing a decision and formally announcing its plans.

"It was unfortunate that I couldn’t get the board to move quicker, but some on the board thought it just wasn’t a good option for the town, and we could not fill the facility at the price we were discussing," McMurray said.

Founded in 1945 by Will Cannon and his sons, CannonDesign has handled projects in more than 40 states and 15 countries, including the Buffalo Niagara International Airport terminal, the Erie County Public Safety Building, the Montante Cultural Center at Canisius College, the new federal courthouse in downtown Buffalo, and Kaleida Health's Gates Vascular Institute.

It's also currently working with Ciminelli on the developer's planned 201 Ellicott St. project, which will include 201 affordable apartments, a downtown fresh foods market and limited parking.

Constructed in 1990, the 423,000-square-foot Fountain Plaza complex – one of two adjacent facilities on Main Street, alongside the Bank of America Building – was formerly called the KeyCenter until KeyCorp relocated its regional operations to Larkinville following its acquisition of First Niagara Financial Group.

The complex – which is majority owned by Paul Ciminelli, with a minority stake still held by New York City's Erwin Zafir – consists of a 15-story north and an 11-story south tower, and is managed by Ciminelli Real Estate Corp., which now occupies the fourth and fifth floors.

Cannon was technically the "architect of record" for the original construction of Fountain Plaza, handling final permits and drawings, although the original design work was done by another architect.