As a salesman for the Sysco supply company, he arranged for trucks to deliver factory-farmed animals processed on industrial-scale production lines, packed in plastic bags and delivered by the truckload.

Today, Moriarty offers Buffalo a new way to buy meat – the old way, gone from the Buffalo marketplace for a generation. It is as un-modern as you can get.

At Moriarty Meats, 23 Grant St., he and his wife, Caitlin, have turned the former Zarcone & Sons Italian Meat Market into a purveyor of bespoke meat. It’s the only place in Buffalo selling locally raised animals by the retail cut, satisfying the hungers of cooks not satisfied with the usual supermarket offerings.

Every week, a few animals arrive at the shop, such as beef cattle, lambs, and pigs. Moriarty knows where and how they were raised. By the time the animals cross the threshold, much of the most popular cuts have already been sold, to customers alerted by Moriarty’s weekly email.

Steaks are the minority of a steer, pork chops and hams the lesser part of a pig. At Moriarty Meats, the butcher does what butchers used to do: make the most out of the rest of the animal.

“I bring in the whole animal, so there are literally 40 or 50 cuts of beef that you’ll see in the case, compared to the maybe five or six you’ll see in the supermarket,” Moriarty said. “So it allows you to explore other cuts we just don’t have here in the U.S.”

“I bring in the whole animal, so there are literally 40 or 50 cuts of beef that you’ll see in the case, compared to the maybe five or six you’ll see in the supermarket,” butcher Thomas Moriarty said of his Grant Street shop, Moriarty Meats. (Derek Gee/Buffalo News)

Last week, Moriarty brought in a side of beef from Shining Star Cattle Co. in North Collins. His display case included cote de boeuf, or ribeye ($18.99 a pound), but also what French butchers call the surprise ($12.99), a steak amenable to panfrying that’s hidden deep inside the animal, under another muscle.

Moriarty widens the diversity of his offerings with more labor-intensive ones. Some of the beef was pounded into thin cutlets, rolled around garlicky housemade beef sausage, then caul fat, and tied into a tidy little half-pound parcel, suitable for a quick sear-and-braise dish. Called paupiettes, they went for $6.99. 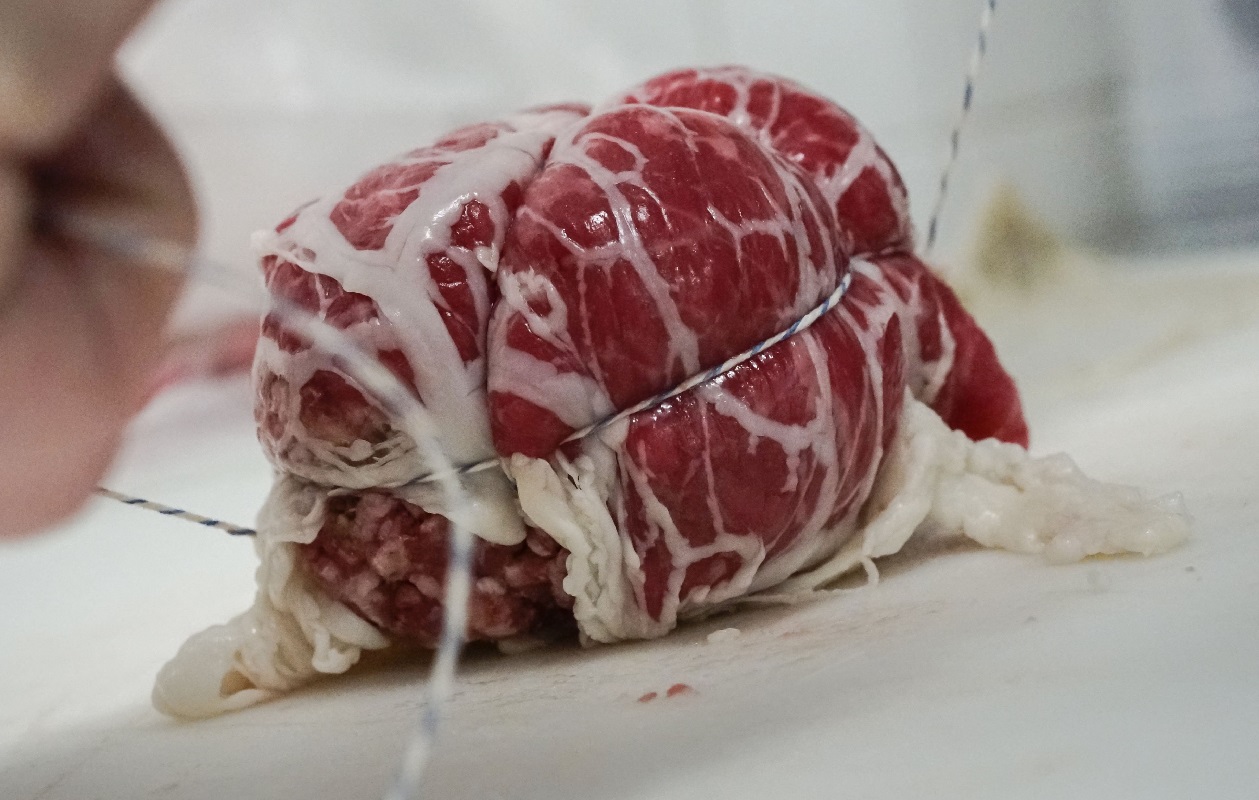 If it doesn’t sell, meat is turned into a sausage of the week, or cooked into a variety for prepared foods. While customers wait, they can pore through a freezer filled with packages like beef burgundy, ancho chile pork, lamb curry, or beef and veal barley soup.

The diversity of offerings is an essential part of Moriarty’s game plan. If home cooks have the time to learn, he can usually point them to another cut in the case that would satisfy the same way. With a culinarian’s knowledge of cooking, combined with the training of a French butcher, Moriarty helps home cooks travel safely past the border of carne incognita.

“I understand budgets. There are things I can’t spend a good chunk of my paycheck on,” he said. If you’re interested in knowing where your meat comes from, and contributing directly to the local economy, and especially if you’re interested in a wider variety of cuts to choose from, he said, Moriarty Meats might be worth a stop.

The Moriartys officially opened the business in January 2018, but in some ways, Thomas has been getting ready for decades.

After his junior year at Canisius High School, Moriarty was an exchange student in Spain, then studied Spanish in college and wanted to return. “I applied to a culinary school on a whim, to get my visa, and that is what got me into the culinary world,” he said.

Two years later, after graduating from a Spanish culinary school, he returned to the U.S., and started working for a Massachusetts family farm supplying all-natural beef to Boston buyers. “I was selling beef to restaurants and at farmers markets, and wanted to know where all the cuts were coming from,” Moriarty said.

He moved to France, and worked at a bed-and-breakfast for two years while attending butcher school and a related apprenticeship. The biggest difference between French and American butcher styles is the work that goes into preparing each cut.

American meat-cutting emphasizes affordability. In France, “you’re pulling out and seaming out the different muscles, instead of cross-cutting on bandsaws,” Moriarty explained.

“A chuck steak here in the States would have four or five different muscle groups that all have different textures, surrounded by different nerves and tendons,” he said. “In French butchery, all the muscles are seamed out so that it lends itself to preparing different recipes. Different recipes will call for different cuts, depending on different flavor, texture, and tenderness. So there’s a lot more nuance, without sounding too haughty.” 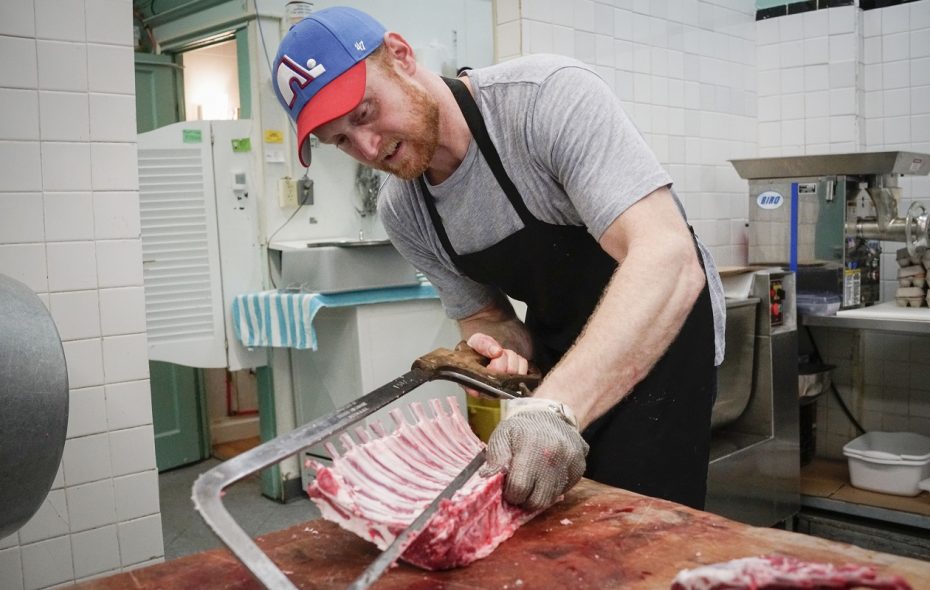 After he finished butchery school, Moriarty moved back to Buffalo. He tried to open a shop on Niagara Street in 2011, but “it wasn’t the right time,” he said.

He needed a job, so he got into food sales. That’s when he met Caitlin. Then he got into selling wine.

A year and a half ago, he got into the former Zarcone’s space, after its owners retired. The Moriartys opened the shop on Saturdays, to see if Buffalo could support a market for fresh local meat.

“There is a market, a strong market,” he concluded.

Avid home cooks looking for specific cuts of meat for charcuterie or recipes have someone to call to find what they need. People who want to eat local, but not dedicate a freezer to a half pig and quarter cow made Moriarty’s a regular shopping stop.

He can’t sell everyone steak and chops. “When they’re gone, they’re gone,” he said, but his knowledge and diversity of options gives him a shot at making most meat buyers happy.

Besides the prepared foods, he offers two kinds of fresh seafood each week to help to round out the case. Last week it was cod cheeks and scallops.

The growth in Moriarty’s business is built on shoppers like David Valentin. A cook for an Amherst restaurant, Valentin is drawn to Grant Street for a satisfying combination of meat and knowledge. His new favorite cut is lamb neck.

“It sounds off-putting to most people, but basically the neck of any animal is the most tasty,” Valentin said. He paused. “I hate talking about lamb neck because I don’t want other people to buy it.”

When Moriarty only sold on Saturdays, Valentin would deliberately come late, to shop the odds and ends. “It sparks my creativity a little bit, and I play with weird cuts I wouldn’t normally choose,” Valentin said. “I love that.” 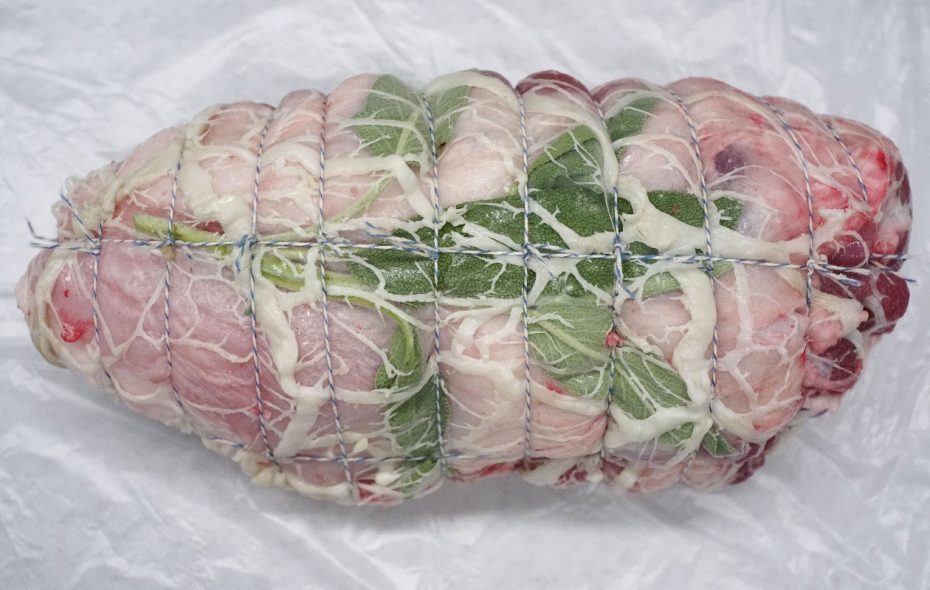 “Every time I go there, it’s like a surprise. There’s a sense of adventure,” said Biesinger, who shares cooking as a hobby with his wife, Lisa. “He has cuts that I’ve never experienced before.”

Take veal breast, for example. “We got to take that home, and it was something we never knew existed before walking into the shop that day,” Biesinger said. They made blanquette de veau, the classic French braise. “It was amazing.”

After years of trying to access fresh local meat, the shop is a revelation to Biesinger. “Having it straight from the farms, expertly cut, and displayed in an attractive fashion makes a difference,” he said.

Biesinger gives thanks for a well-marbled eye of round to turn into bresaola, Italian cured beef charcuterie, and a superior air-chilled chicken to turn into Hainanese chicken and rice.

When he’s at Brazilian steakhouse Texas de Brasil, Biesinger favors the picanha cut, lean sirloin with a thick fat cap that’s rubbed with garlic and grilled. Finally, he has a place in Buffalo where he can get it, by ordering it ahead of time.

Moriarity doesn’t deal in cheap meat, but since they’re trying to eat less meat, but better meat, “I feel better about eating beef that way,” said Biesinger. “Knowing the farm it came from, and knowing the guy who cut and trimmed it, adds flavor and essential enjoyment to every meal.”

A couple of weeks ago, the Moriartys decided to take a leap of faith. He quit his other job. Now Moriarty Meats is open four days a week: Wednesday 3 to 6 p.m.; Thursday and Friday 10 a.m. to 6 p.m.; and Saturday 10 a.m. to 4 p.m. People can visit moriartymeats.com to sign up for the weekly menu email, and follow the business on Facebook and Instagram.

“What Caitlin and I want is for you to be able to walk into our shop, and have it be like you might have experienced in a butcher shop 40 or 50 years ago,” he said. “It’s still an exploratory business,” he said with a shrug. “If it doesn’t work, I can always go back to sales.”