What was supposed to be a three-week stay for rehabilitation at a Buffalo nursing home turned into five long years for Janine Ziomek-Witek.

Her lower right leg had been amputated in 2014. She wanted to return home to her husband following the therapy. But questions were raised about her ability to live on her own, she said, so she remained at the troubled Emerald South Nursing and Rehabilitation Center.

“In some ways I felt like a prisoner. I was told I had to meet requirements medically before I could get out. I disagreed, but there was nothing I could do about it,” Ziomek-Witek said.

On April 1, after convincing nursing home officials she could live on her own, the 53-year-old Buffalo woman was finally moved into an Amherst apartment, giving her a reason to celebrate.

Ziomek-Witek, who uses a wheelchair to get around, is not alone.

The state and federal governments fund a program known as Open Doors that helps nursing home residents make their way back to independent living. More than 200 people in this region have been able to leave nursing homes as a result in the last three years, according to Gerilyn Capps, the Open Doors program coordinator at Western NY Independent Living.

“A lot of people are prematurely placed in nursing homes when they can live in the community with community-based services that can meet them at their level of care,” Capps said. “We get referrals daily from people who want to leave the nursing home and return to the community.”

There’s another reason for Open Doors. It saves taxpayers’ money.

Federal, state and county governments spend billions of dollars through the jointly funded Medicaid program to pay the bills of most nursing home residents after they use up other forms of insurance and private resources.

Ziomek-Witek's stay at the troubled Emerald South, where a woman was beaten to death and a man fell to his death trying to escape in recent years, had cost taxpayers hundreds of thousands of dollars. When the home closed in January following its sale, the state reimbursement rate for its residents on Medicaid was $212 per day.

At her two-room apartment, the monthly rent is $599 or about $20 a day. Ziomek-Witek’s apartment is part of a Medicaid-supported managed long-term care program at Stovroff Towers on the Weinberg Campus in Amherst.

Although Open Doors was not involved in Ziomek-Witek's departure from a nursing home, Capps said the program is saving the state hundreds of thousands of dollars a year by helping others leave nursing homes. 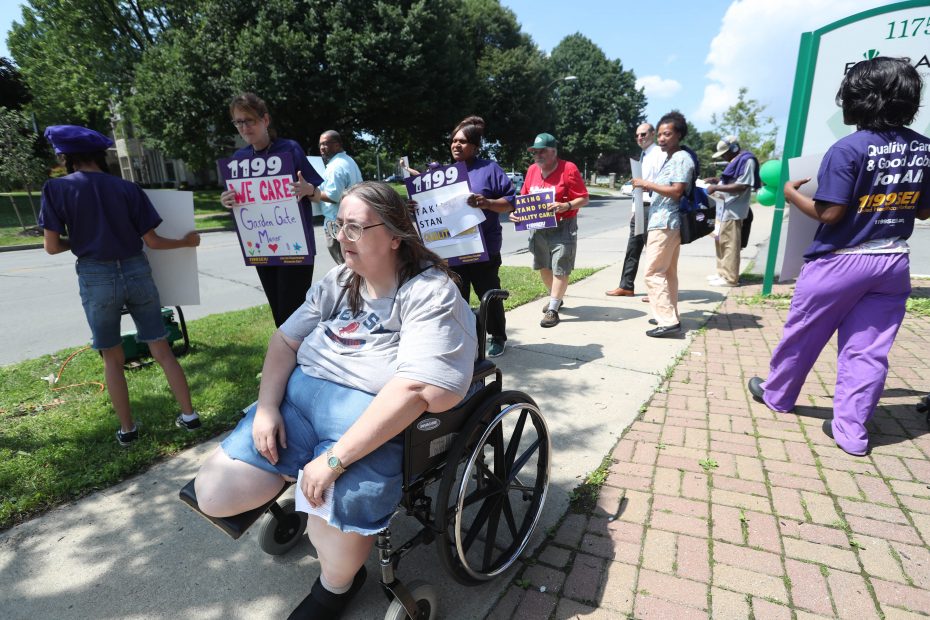 Emerald South nursing home resident Janine Ziomek-Witek, in wheelchair, attends a rally by workers outside the nursing home to protest unsafe conditions there on June 28, 2018. A resident at Emerald South fell to his death on June 4 and another was previously beaten to death. (Sharon Cantillon/Buffalo News file photo)

Ziomek-Witek and her husband of more than two decades had lived in an apartment in Kaisertown for years before she was taken to the hospital with an infection in her right leg. The infection spread to her blood.

“I was told that if I didn’t have the emergency amputation I was going to croak,” Ziomek-Witek said.

Soon after the June 28, 2014, surgery, she was transferred to Emerald South for therapy. Because a previous surgery on her left knee had not healed correctly, she said she was unable to make use of a prosthetic for her right leg.

But even so, Ziomek-Witek said she believed she could navigate life back home.

“They did medical assessments and said I couldn’t leave,” she said. “I went from a short-term resident to a long-term resident in September 2014.”

And so began her battle.

“I joined the resident council and became president and was trying to work through the council to get out, but that went nowhere,” she said.

Michael Witek, her husband, continued to reside at their Cable Street residence and took Metro buses several times a week to visit Ziomek-Witek. But by the second year at Emerald South, the federal Supplemental Security Income checks they were using to pay rent on their  apartment halted.

Michael Witek said he ended up homeless for a short period, before a relative opened his home to him.

“When I was at the nursing home, I was complaining that the staff wasn’t taking care of Janine. I wanted her out. I wanted to take care of her, but I didn’t have a place,” Michael Witek said.

His wife couldn't just leave the nursing home. She had no place to go. 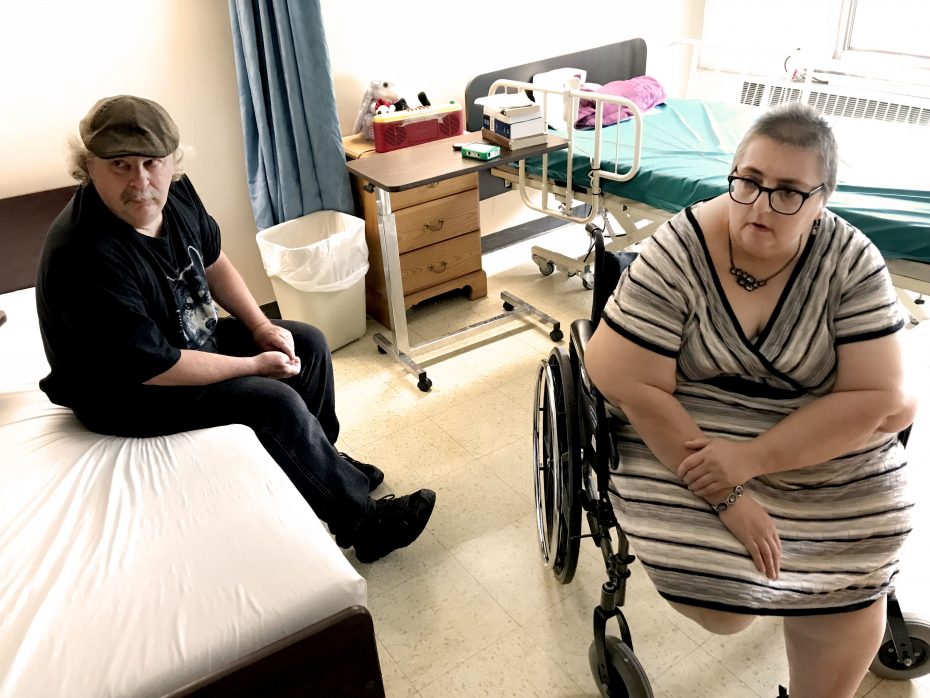 Janine Ziomek-Witek and husband Michael Witek, in her room at Emerald South on Sept. 11, 2018. She entered the nursing home for rehab after her lower right leg was amputated in 2014 and ended up staying there for five years. (Robert Kirkham/Buffalo News)

In 2016, Ruth Murray, an 82-year-old resident in Emerald South’s dementia unit, was beaten to death by another unit resident after she mistakenly wandered into his room. Last June, William Strasner, 87, also a dementia unit resident, fell from his third-floor window in an attempt to escape.

The state Department of Health issued fines of $10,000 in connection with each death. The federal government designated the 122-bed Emerald South a “special focus facility” because of the unsafe conditions.

Grand Healthcare System of New York City purchased the operations for Emerald South and the nearby Emerald North Nursing and Rehabilitation Center last fall and soon announced it would close Emerald South.

With Emerald South's 64 residents being transferred to other facilities, Ziomek-Witek says she started pushing hard to be released. It worked. She credits Dawn LaMagna, a regional nurse for Grand Healthcare, with taking up her cause.

“Basically, there was a rush to get people out the door at Emerald South. Things were going full tilt. Dawn arranged for me to have an assessment and it was determined I could be released,” Ziomek-Witek said.

But first she would have to spend a few months at Emerald North, where she received physical therapy to strengthen her arm muscles.

Jay Lawrence, a spokesman for Grand Healthcare, said he could not comment on Ziomek-Witek’s case, but said LaMagna and other staff members worked diligently to make sure the transfer of all the residents from Emerald South was accomplished in an appropriate manner.

There was some political pressure, too.

Michael Witek said he sought and received help from the staff of Assemblywoman Crystal D. Peoples-Stokes, whose district includes the Delaware Avenue nursing homes, in making sure his wife was properly placed.

Residents in nursing homes have the legal right to leave, but if the nursing home determines a return to the community is unfeasible, home officials must list the reasons in the resident’s medical records and explain the reasoning to the resident, according to federal regulations.

The regulations also require nursing homes to refer the resident to local support services if the individual decides to leave, even if a discharge is not supported by the facility. As for residents deemed able to return to the community, the nursing homes must develop a discharge plan to ensure a safe transition.

Lindsay Heckler, the supervising attorney at the Center for Elder Law and Justice in Buffalo, says there are some individuals in nursing homes who do not belong in them and want to return to the community. She bases this belief on individuals who have sought legal assistance from the center.

“While not every person who lives in a nursing home may be appropriate to return to the community setting, every person should be afforded the opportunity to do so,” Heckler said.

Heckler said the first step is for a resident to notify the nursing home’s social worker. “If you feel that the nursing home is not doing enough to facilitate a discharge to the community, our office is available to assist in referrals to available resources and provides free legal representation in some cases,” Heckler said.

Capps, the coordinator for the Open Doors program, said nursing home residents can obtain assistance by going to the New York Association on Independent Living and scrolling to Open Doors or by calling her at 836-0822, ext. 203. 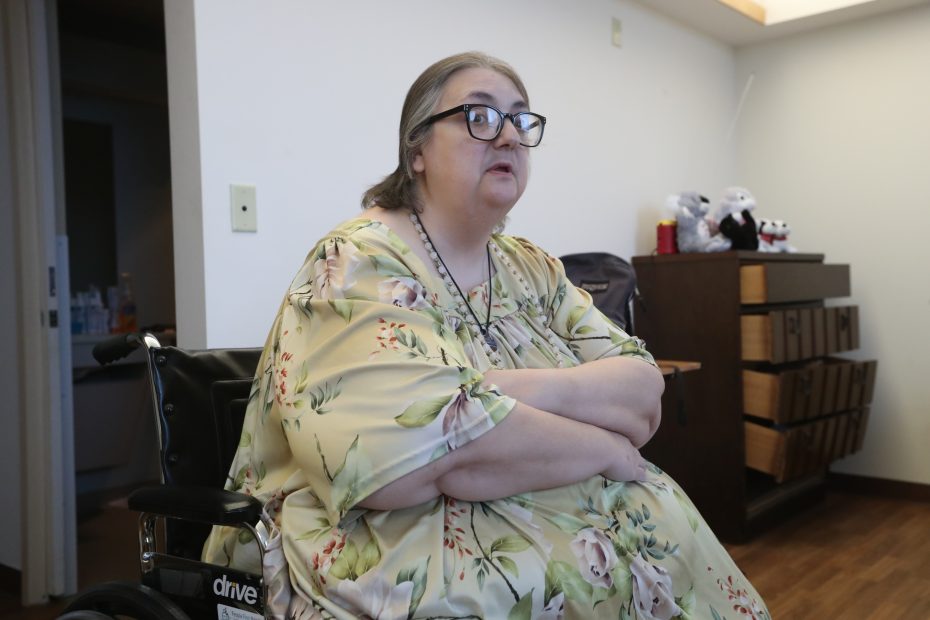 Janine Ziomek-Witek relaxes in her apartment in Stovroff Towers at the Weinberg Campus in Amherst. “You have to fight for your rights and if you have to go to a nursing home for rehabilitation, make sure it is a good one,” she said. She entered the poorly rated Emerald South for three weeks of rehab after an amputation in 2014 and ended up spending five years there. (James P. McCoy/Buffalo News)

‘Fight for your rights’

Sitting in the privacy of her tiny apartment, Ziomek-Witek says her experience has taught her that persistence is a necessary quality for success in being discharged into a suitable place to live in the community.

“You have to fight for your rights and if you have to go to a nursing home for rehabilitation, make sure it is a good one,” she said.

Her apartment includes a bathroom and a second room that doubles as her bedroom and living area. To one side is a small refrigerator and a microwave. Twice a day, she said, Meal On Wheels delivers food.

And while she is living independently, she says aides from the Fallon Health Weinberg Managed Long-Term Care program look in on her a couple times a day.

Yet Ziomek-Witek is not completely satisfied.

The next step in her journey, she says, is to live under the same roof with her 58-year-old husband. Michael Witek says he is working on getting permission for his wife to live with him at Walden Park Senior Complex on Buffalo’s East Side.

“You have to be 55. Janine is 53 but because she is disabled there’s a good chance she can get in here,” Witek said. “I’ve been talking with the manager and it will be a slow process.”

But both husband and wife say they are hopeful.