One of the easier decisions the Buffalo Sabres have this summer? Extending restricted free agent forward Evan Rodrigues.

Rodrigues has been around the Sabres organization for four seasons, but it is fair to say he established himself as a full-time NHL talent in the last two seasons.

Rodrigues amassed 29 points in 74 games and became a regular top-nine fixture under former head coach Phil Housley, which followed up 25 points in 48 games in the season prior.

For a team top-heavy with little support behind the first line, Rodrigues has become a bit of an outlier. He was the one two-way depth forward the Sabres could flex in and around the lineup and expect tangible results.

In that way, he’s sort of the ideal bottom-six skater for a playoff contender – he’ll chip in occasionally on the scoring front, but his otherwise well-rounded game allows a coaching staff to move him around the lineup with little reason to worry.

Sitting around break-even for a depth forward is generally fine, but that’s especially true on a Sabres team that was consistently wrecked further down the lineup. (For some context, Buffalo with the Eichel line off of the ice: 49 percent of the shots, 46 percent of the expected goals, and 43 percent of the actual goals.)

I attribute a lot of that to Rodrigues' polished two-way game. He has learned how to use his speed and agility on the wing to play a very effective north-south style of hockey.

Defensively, he’s capable of skating his team out of trouble and transitioning the ice, and he uses his skating ability to close off passing lanes and harass puck-carriers during opposition offensive-zone cycling. Offensively, he will use the same speed to leverage out defenders and attack the net.

It’s those types of intrinsic talents that make Rodrigues a valuable asset in the lineup.

The data bears this out. If you look at how forwards individually impacted the shot share of other forwards throughout the lineup, you see a consistent theme: Rodrigues was a positive difference maker to other forwards on the Sabres' roster, in some cases considerably so.

The below table shows how many points a given player added to the shot share of another player based on minutes played together (min. 60 TOI together): 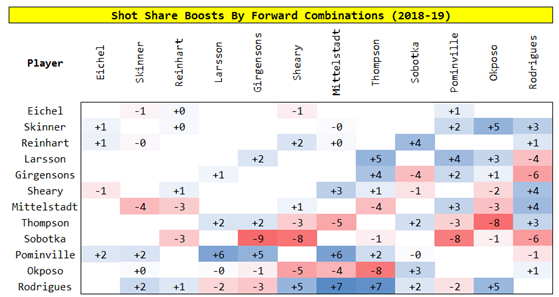 All in, Rodrigues had the fourth-biggest impact – by Relative Corsi percentage — of regular Sabres forwards, only behind Jeff Skinner, Sam Reinhart and Jack Eichel. And this is effectively a repeat of what we saw in 2017-18 in the 48 games that Rodrigues played, so we have even more confidence in the underlying numbers.

Finding play-drivers to sprinkle in your bottom six is critical for long-term success, especially in a league in which talent margins are so thin. Not every forward in the market is a great individual shooter or scorer, but that doesn’t necessarily render the player less valuable. In fact, you could argue that it makes the player more valuable.

Since scoring rates tend to drive contracts and costs, a talented two-way player that only occasionally chips in on the scoring front can usually be had at quite a discount relative to the on-ice impact he is having.