The Quinn family calls it “The Intervention.”

It was fall 2017, nearly three years after Jack Quinn learned he has Parkinson’s disease. But outside of the three people sitting at the kitchen table in his Hamburg home, barely anybody knew.

Quinn, the former six-term congressman, was diagnosed shortly after Christmas in 2014. He had gone to the doctor because of a tingling sensation in his feet, and a series of tests revealed Parkinson’s, an incurable disease that inhibits the brain’s ability to control the body’s movements.

Back then, his symptoms were barely visible. He was president of Erie Community College and fully able to do the job. Quinn was concerned how his nonagenarian mother would react to the news, so he decided to keep the diagnosis quiet.

His wife, Mary Beth, knew. So did his two adult children, Jack III and Kara, as well as their spouses. A few others were looped in, too, but the circle was tight.

But in 2017, a few months after his retirement from ECC, people were starting to notice that something was different about him. Quinn didn’t – and still doesn’t – have the tremors that are commonly associated with Parkinson’s. But he had other symptoms: His movements were slower, stiffer. His arms didn’t swing freely when he walked.

Quinn’s family and friends were asking questions of his wife. “Is there something wrong with Jack?” they would ask. “Is he feeling OK?”

Mary Beth, who is a nurse, urged her husband to start sharing the news. “Jack, you’ve just got to get ahold of this,” she would say. “Get in front of it. You’d rather have people know than people talking about you behind your back.

Mary Beth Quinn’s advice sounds strikingly similar to the counsel a public-relations tactician would give to a politician in crisis. But Jack Quinn wasn’t listening. Not until his children spoke — and that was “The Intervention.”

Keeping it private in public

Quinn has an inability to blend in, and he’s made a career out of it. The 68-year-old is tall, silver-haired and animated, with a generous reach and an ample smile. He is prone to back slaps, handshakes and helping people, all traits that helped him win six congressional elections in the '90s and early 2000s while raising his family in Hamburg.

“The more popular you are, the more chance of winning elections you’ll have, so I always went overboard with being accessible,” said Quinn, a moderate Republican who represented a largely Democratic district during all of his time in Congress.

“We did it, and we knew we would pay a price for privacy, both as a family and by myself,” said Quinn, who left Congress in 2005, spent a few years as the president of a D.C. lobbying firm, then returned home in 2009 to become president of ECC. The latter job kept him in the public eye, and even today he finds people notice him wherever he goes. 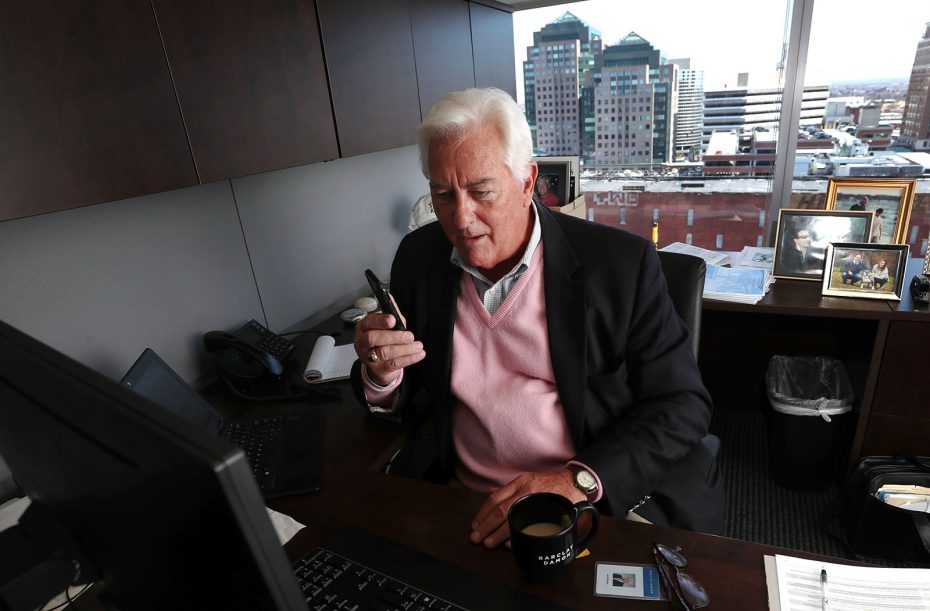 Jack Quinn in his office at Barclay Damon, where he's the senior advisor for public and community relations. (Sharon Cantillon/Buffalo News)

That’s partly because he knows thousands of people, but it’s also because in Western New York, he’s a famous face. Just days ago, for instance, he was standing in line at an ice cream stand in East Aurora when a man noticed him, Googled him, and confirmed what he thought: That guy eating ice cream is Jack Quinn.

“It’s hard to go (unrecognized) still,” Quinn told The Buffalo News during a recent interview in his Hamburg home.

That is a dynamic of Quinn’s own creation. After graduating from Siena College in 1973, he spent 10 years as a middle school English teacher and coach in Orchard Park. In the 1980s, when he ran for the Hamburg Town Board and eventually became supervisor, he leapt into a spotlight that he’s never left. Living his life as a public figure has long been the norm for Quinn, but doing so discreetly as a Parkinson’s patient required some spin.

Quinn’s younger brother Jeff was diagnosed with Parkinson’s nearly a decade ago, and he was treating it in part through boxing at a Kenmore gym. Jack Quinn visited the facility, called Parkinson’s Boxing, and told people he was there to support his brother. Which was true, but not the only reason.

“I was going to watch Jeff,” Quinn said, “but was (also) watching to see if it’s something I want to do.”

[RELATED: Taking the fight to Parkinson's disease, one jab at a time]

Of course, Quinn couldn’t openly participate in Parkinson’s Boxing unless he was willing to acknowledge the disease, and he wasn’t there yet. He was still pulling some covert strategies even to go to the doctor. “He used to take me to the neurologist with him,” Mary Beth said, “because he thought if someone saw us, he would say, ‘Oh, it’s my wife, she’s sick.’ ”

She laughs — but that’s now. She wasn’t laughing then.

Kara (Quinn) Burke grew up watching her dad operate in full view of the public. She was in elementary school when her father was elected to Congress and had just graduated from Georgetown University when he left it. When her father retired from ECC in mid-2017, he didn’t step away from work altogether. Quinn took a job with the Buffalo law firm Barclay Damon as a senior advisor for public and community relations, but he would clearly have more free and flexible time than he did as a congressman or college president.

Burke hoped that her dad would use his newfound freedom to openly advocate for Parkinson’s treatment and research. So did her brother and mother. But it wasn’t happening.

“We were expecting a big thrust of energy into that, and we weren’t seeing him take that big leap into it,” said Burke, who is a vice president for Rich Products. “I think the reason was because he wasn’t really open with the disease at that point. We all huddled and said, ‘We’ve got to talk to him here.’ We didn’t want him to hide behind it, knowing what a strong influence he is in the community.”

That led to the "Intervention.” Quinn came home one day to find his wife and children sitting at the kitchen table, waiting for him. They sat him down, and as the elder Jack and Mary Beth remember it, Kara said to her father, “How can you possibly get any better if you’re hiding behind this disease?”

Mary Beth, sitting next to her husband during the interview at their home this month, recalled, “That’s all he needed to hear.”

Jack Quinn nodded and simulated picking up a phone and calling his brother. “I'm ready for boxing, Jeff,” he said. 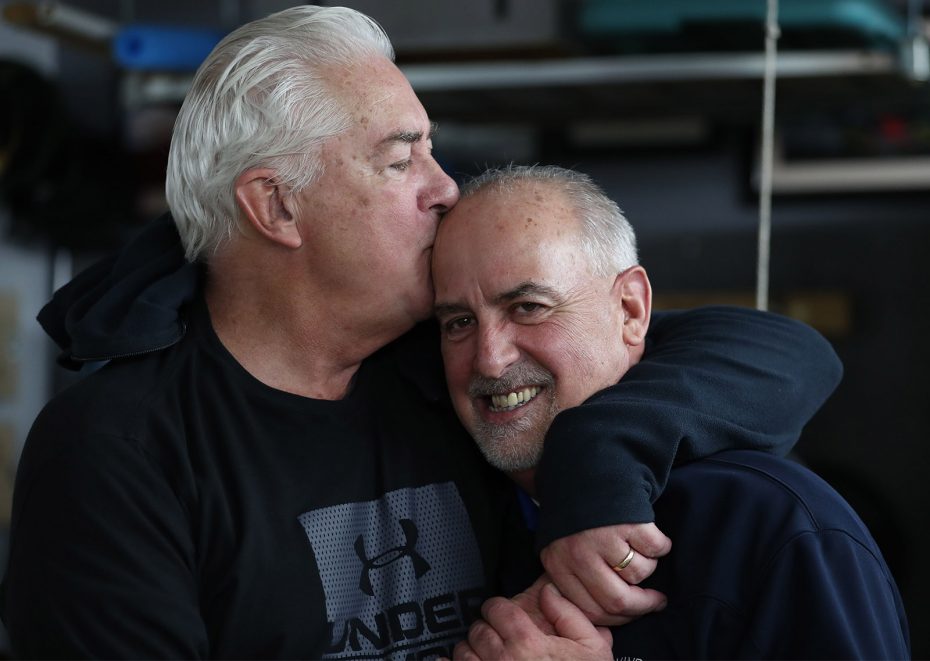 Jeff Quinn, right, has had Parkinson's for eight years. He began working out at Parkinson's Boxing and then became a trainer himself. (Sharon Cantillon/Buffalo News)

Quinn began boxing that summer, but in the meantime he needed to start telling people about his Parkinson’s. Jack III, a former New York State assemblyman who now lives in Saratoga Springs and works in government affairs for the pharmaceutical company Sanofi, helped his dad create a plan for letting people know. It included family and a lengthy list of elected officials, colleagues and friends. Quinn took his brother Jeff along to tell their mother, who took the news surprisingly well and actually changed the subject after a couple of minutes.

“That goes back to having Jeff,” Quinn said, taking a deep breath. He let the room drop silent as his eyes moistened and he tapped his knee.

Jeff, who is five years younger and was diagnosed with Parkinson’s in his 50s, has been a role model of sorts in his older brother’s fight. Jeff will call Jack to push him to work out every day. (Exercise is key in staving off the effects of Parkinson’s.) “When Parkinson’s takes a day off,” Jeff will say, “you get a day off.”

Jeff, who worked in politics but was long in his more-famous brother’s shadow, is now leading Jack through this fight. And though Jack doesn’t offer many details of their conversation with his mother, his gratitude for Jeff in that moment – in every moment – is palpable.

“She was good,” Jack said of his mother. “But having Jeff is helpful.” 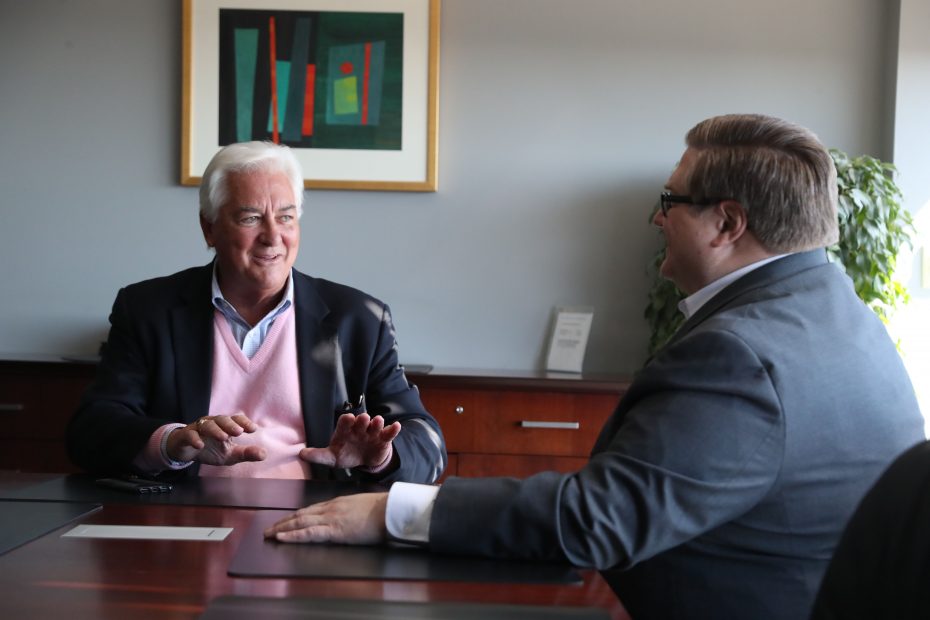 After retiring from ECC in 2017, Quinn joined the law firm Barclay Damon as a senior adviser. Here he speaks with partner Jim Domagalski, who is also a former Erie County Republican chairman. (Sharon Cantillon/Buffalo News)

For Parkinson’s patients, having Jack Quinn in their fight may be helpful, too. That is what his family is hoping and why they intervened.

“We said, ‘Look, for whatever capital you have left’ – and by capital, I mean goodwill in the community – ‘you should go out there to represent all of those teachers and carpenters and plumbers who don’t maybe have a voice in the Parkinson’s world,” Jack Quinn III said. “Use that goodwill to not only talk about solutions and medical advancements, but also to humanize and better explain the disease.”

That’s what Quinn is doing. He’s helping Dean Eoannou, the owner of Parkinson’s Boxing and the creator of its training techniques, find ways to expand the business. He was involved in talks with Independent Health, which recently agreed to cover the program with a small co-pay, and he is in conversation with other insurers. Quinn is also reaching out to the Michael J. Fox Foundation for Parkinson’s Research, and he’s involved in an April 26 Parkinson’s Foundation fundraiser at the Millenium Hotel Buffalo. His law firm has provided support, and many of his influential colleagues and friends have indicated they’re ready to help when called on, too.

Quinn doesn’t want people to feel sorry for him and, in fact, he cringes a bit when he recalls an acquaintance who put his arm around him, patted his back and gave him a kiss. “He wouldn’t do that in a hundred years unless he knew I was sick,” Quinn said.

He understands people’s intention s are rooted in their concern, but he doesn’t want his own Parkinson’s story to be one that started in secrecy and climaxed in sympathy. “It’s not a death sentence,” Quinn said.

Quinn, who often makes a point by recapturing his conversations with others, embraced a thought voiced by his son, Jack III. “Jack said, ‘I don’t want to call this your last assignment, because it sounds like we have the hearse warmed up at John Kaczor’s (funeral home), but seriously, this can be something you can really work toward,’ ” he said. “And it’s worked out that way.”

Taking the fight to Parkinson's disease, one jab at a time