At one point in time, Buffalo was rich with Jewish delis and restaurants.

But one by one, Mastman's Deli on Hertel Avenue, Reuben’s N.Y. Deli in Amherst and Tel Aviv Cafe by Falafel Bar in the JCC, among others, have all shut their doors. These closings made it hard to find a good roast brisket or potato pancake, especially during the non-holiday times of the year when you can't rely on your family's home cooking.

But if you know where to look, there are some Buffalo restaurants serving stellar Jewish cuisine. For New York City transplants or UB students from downstate looking for a taste of home, here are my top five picks for ordering Jewish food in Buffalo.

Ironically, the best bowl of matzo ball soup I've found in Buffalo is at a gourmet hot dog joint. The rest of Frank's menu may not exactly be kosher, but it hits this Jewish staple out of the park.

A bowl of soup will run you $6, which is a little bit pricey, but the portions are generous. The broth is bursting with flavor and schmaltz –– rendered chicken fat, a popular ingredient in Jewish cuisine ––  and includes one giant, fluffy matzo ball. Pair it with a sky-high pastrami sandwich ($12) and you're good to go.

The only catch is that matzo ball soup and pastrami are part of Frank's cycling specials menu. Check its Facebook page for updates on when the restaurant is serving up the dishes next.

If you're craving a cup of bubbe's soup but Frank's isn't serving, Risa's, which very well may be the last true Jewish deli in town, is a no brainer.

At the recommendation of The New's food critic Andrew Z. Galarneau, I checked out Risa's for a sandwich and cup of soup, and wasn't disappointed. For $7.50, Risa's runs a steal of a lunch special offering half of any sandwich and a cup of soup. The chicken noodle matzo ball soup ($4.55 for a full bowl) is light yet filled with lots of schmaltzy flavor. Risa's variation is chocked full of chicken meat, veggies, noodles and two al dente matzo balls creating a lip-smacking concoction.

I paired my soup with a roast brisket sandwich ($8.95), which was filled to the brim with juicy cuts of meat that melted in my mouth. Risa's also serves other Jewish sandwiches like whitefish salad ($7.95), pastrami ($8.95) and kosher beef salami ($8.25). 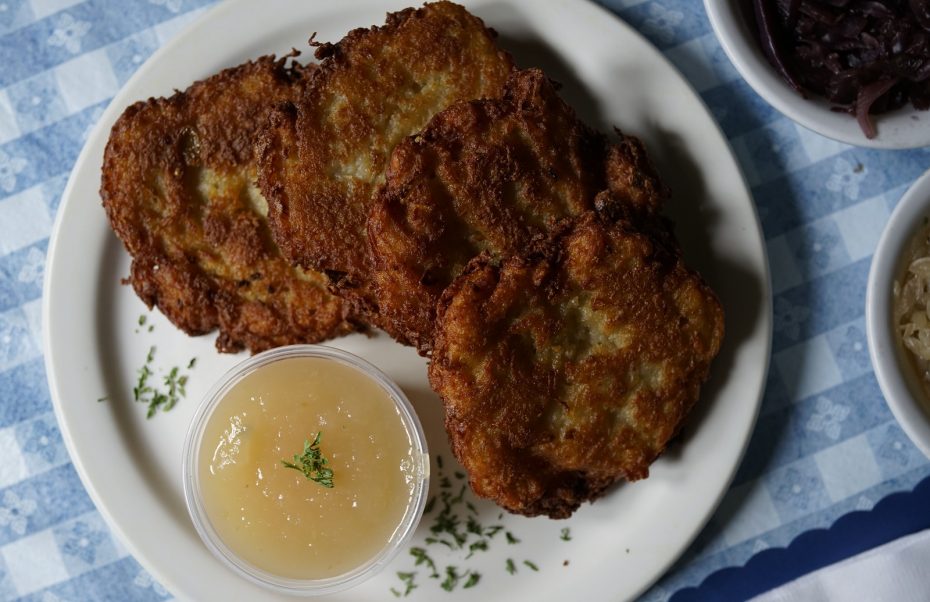 I can't talk Jewish food without mentioning potato pancakes. While some places serve them only around the holidays, Scharf's serves delicious latkes year-round.

An appetizer of either two, four or six potato pancakes will run you $5.50, $9.50 and $13.50 respectively. The potato pancakes are fluffy and buttery on the inside but have a perfect char on the outside, offering a crisp bite that ends with a velvety rush of potato. These potato pancakes are massive -- one takes up half the plate. The dish comes with a side of applesauce, the classic dipping condiment for potato pancakes.

[Review: German food without much of an accent at Scharf's]

Almost every culture has a dough pocket-style street snack, and for Jews, it's the knish. Offering a blend of traditional fillings and more contemporary fusion fillings, The Bloom and Rose serves one of the best knish in town.

Currently, The Bloom and Rose sells knish with classic onion and potato filling, spinach and feta filling, and an Indian samosa filling. Each is made with local ingredients. Seasonal flavors rotate in and out throughout the year. The outer crust of the knish is buttery and flaky. Once you bite in, the juices from the filling absorb into the dough, making each bite even more savory. One knish is $4, or you can stock up with three for $10 or 12 for $35.

Although falafel may not have originated from Israel, it plays an iconic role in Jewish cuisine and is widely known as the national dish of Israel. Lucky for Buffalonians, there's tons of great falafel in town, my favorite being from the House of Hummus.

For $6.49, the falafel wrap, four generously sized falafel and Jerusalem salad wrapped in pita, is a steal. House of Hummus boasts the "fluffiest falafel in Western New York" and they aren't kidding. While some falafel can be dry, these have the perfect outer crisp but maintain a soft, moist inside.

Email mkalnitz@sun-news.com if you've got any recommendations for Jewish food in the Queen City.