John Tumiel marveled that the old gymnasium still exists. He listened as I told him what Roman Miszewski pointed out to me last week at the St. Casimir Social Center in Buffalo, in a time capsule of a gym within a building Tumiel called by another name, almost 50 years ago.

When he knew the place, it was Bishop Ryan High School.

Miszewski, newly retired after 29 years as co-custodian at the center with his wife, Jolanta, was among the volunteers preparing for Monday’s third annual “Dyngus Day in Kaisertown” event. He and Robin Reynolds, co-owner of the nearby Pizza by Molinos, showed up with a crew of friends to do the last bits of decorating in a space packed with red streamers, red-and-white tablecloths and vases filled with pussy willows.

When he had a minute, Miszewski took me behind a stage still emblazoned with the Bishop Ryan seal to a place where generations of students wore trails in the floor while putting on their musicals. Those productions were the work of the school theater club, which triggered a burst of wistful memories for Tumiel.

“They saw something in me in that school,” Tumiel said Friday from Maine, where he is a senior adviser to the president and vice president for board relations at the University of New England.

Tumiel, 65, graduated in 1971 with the final senior class, just before the Diocese of Buffalo closed Bishop Ryan. The gym, with tile floors and wooden backboards, is essentially unchanged. For Tumiel, it recalls a time when such powers in the old Burke League as Canisius and St. Joe’s waged basketball wars against Bishop Ryan, evenings when the heat and sweat were so thick the floor itself seemed to grow moist from sheer emotion.

“I didn’t know it had been preserved in that way,” Tumiel said, and the thought left him longing to walk through the building. Miszewski said the response is typical. There is no doubt, he said, that memories of Bishop Ryan play a role in the success of Dyngus Day at St. Casimir’s, part of a larger civic celebration that includes a parade and a "Pussywillow Pass" that involves riding a shuttle from spot to spot. 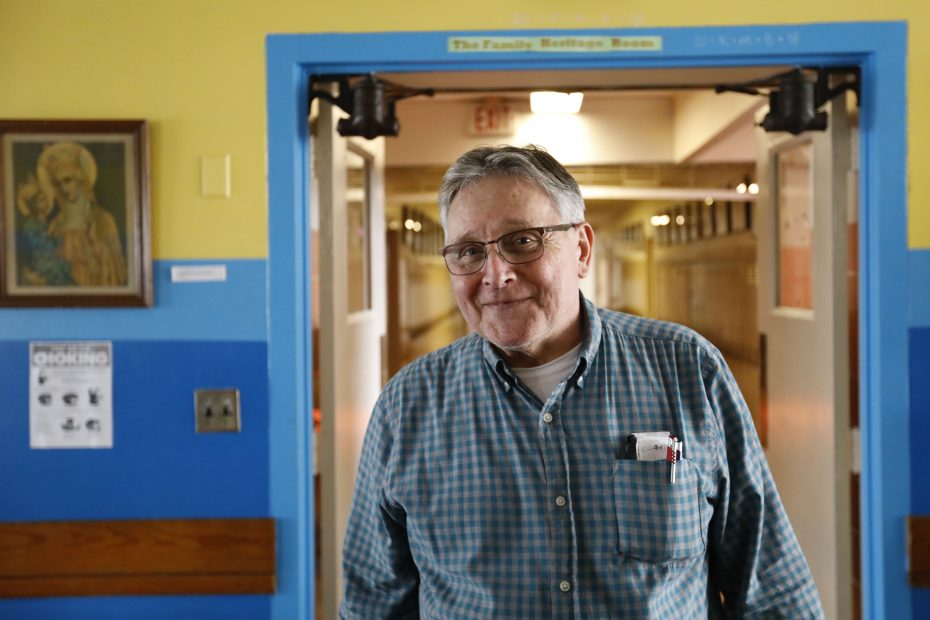 Roman Miszewski at the St. Casimir Social Center on Friday. The building used to be part of Bishop Ryan High School before it closed in 1971. (Derek Gee/Buffalo News)

Dyngus Day drew 300 people last year to St. Casimir's, Miszewski said, including a significant contingent of Ryan graduates – many belonging to an alumni association based at St. Francis of Athol Springs – who wanted to see what was left of their old building.

The gathering began a few years ago with a conversation between Reynolds and Bill Malczewski, owner of Hector’s Hardware and a guy often known as Accordion Bill. They both have deep Polish-American roots – Molinos is the rare pizzeria that also makes pierogis – and Malczewski passed on a question he first heard from Eddie Kutas, of the Polish Villa:

Why didn’t they bring a Dyngus Day to St. Casimir’s, on Clinton Street?

Sean Kirst
At a gateway to Riverside, a true believer looks for better sidewalks
On Memorial Day, remembering her dad's close call at end of World War II
For Memorial Day, Covid-19 survivor keeps faith with sister lost to Spanish flu
For Joey Giambra, with family, friends and Buffalo: 'It stuck to him forever'
More Stories

“He said we could do it, and we did,” said Malczewski, a result he credits to committed volunteers and sponsors. The event benefits the efforts of the Rev. Czeslaw Krysa and his congregation at St. Casimir’s, including a food pantry that operates from the old high school.

To Reynolds, the goal is reinforcing the idea of community touchstones within walking distance of your front door. “This is what we’re missing,” she said, gesturing at folding chairs and red banners and a section where children Monday will be able to color and play games.

Kaisertown, she said, remains a strong neighborhood. Yet as the World War II generation bids farewell and the Baby Boomers age into retirement, she worries that first-time homeowners often see the area differently.

She has young friends who perceive Kaisertown as a stepping stone, rather than a place to stay. To her, the Dyngus Day celebration – in which longtime radio buddies Danny Neaverth and Accordion Bill will introduce the Buffalo Good Times Polka Band – is not intended as some gesture toward yesterday.

It is a statement on why people ought to stick around.

“We want them to fall in love with Kaisertown,” she said.

That happened almost at birth for John Tumiel, the oldest of Joe and Viola Tumiel’s four children, in a neighborhood where he could smell the aroma of kielbasa and kapusta and other Old World staples coming through screen windows as he delivered papers. Nothing came easy, and he said his parents "were always working hard to make ends meet."

Tumiel’s dad was a railroad worker. They had one car that was not trustworthy enough for overnight vacations. When Tumiel was 12 or 13, some of his childhood friends began crossing the line from mischief into outright trouble, and a gut instinct told him he should go to Bishop Ryan.

He might as well have asked for a trip to Disneyland.

Still, Tumiel took the entrance exam, and he received what to him seemed to be a miracle: The priests told him he scored high enough for a scholarship. He ran home, exultant, to tell his folks, and his father gave him a look that makes Tumiel laugh today, even if it did not seem so funny at the time.

“They’re lying,” his father said, rolling in a profanity.

A few weeks went by. Nothing happened. Tumiel began to think his dad was right, until a letter arrived confirming the scholarship, and his parents realized it was true. All of a sudden, Tumiel said, “I was the apple of their eye.” 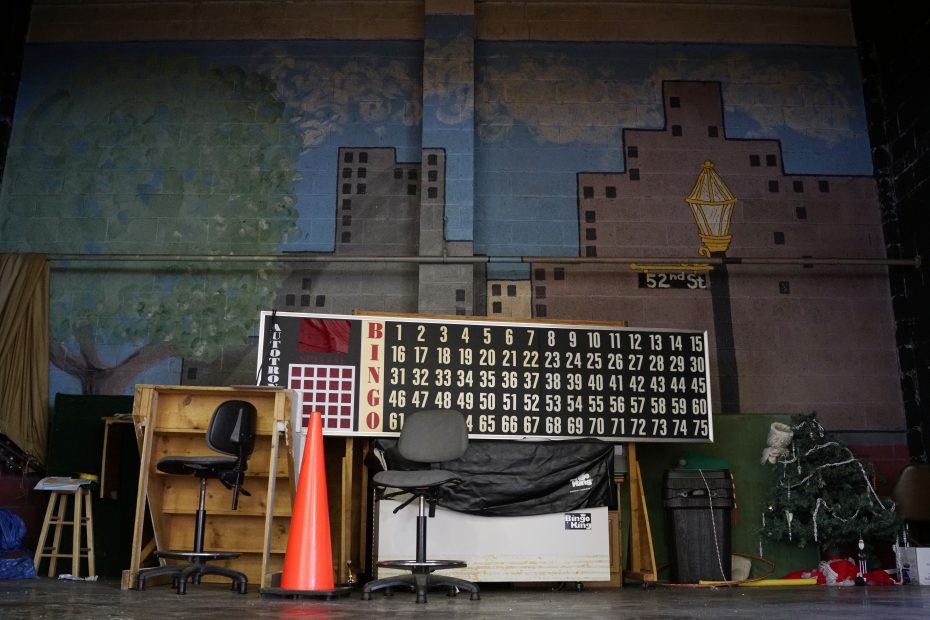 The stage in the gym at the St. Casimir Social Center is a time capsule, part of what used to be Bishop Ryan High School before it closed in 1971. (Derek Gee/Buffalo News)

Even so, he remained a wiseguy at school, and Tumiel said one of the priests, trying to turn him around, ordered him to take a theater class that should have been an easy "A."

Tumiel did, but he kept making noise and paying little attention. The result was a "D." With a sickening jolt, he realized he had probably thrown away the scholarship. He braced for the worst when a teacher named Lewiston Manuel called him in and told him to sit down.

Manuel offered a deal. He would lift the mark to a "C" if Tumiel, from that point on, closed his mouth, paid attention and did his work.

Something clicked. Tumiel's grades climbed, and he ended up running the stage crew for school productions of "South Pacific" and "Oklahoma" in that little gymnasium. He graduated and studied occupational therapy at Erie Community College. His journey took him to Syracuse and, eventually, into private practice.

Tumiel did some pivotal work on the needs of children with disabilities, a passion that carried him into academia. Today, the kid whose parents did not want to send him to Bishop Ryan is a prominent college administrator.

Sure, he said, he remembers the citywide fervor for Dyngus Day in Buffalo, at the end of Lent. One of these years, if he gets the chance, he would love to stop by the celebration at St. Casimir’s, because in a way – for every child in the neighborhood – he represents the point.

What happened to him should be the future, not the past, of Kaisertown.