The spectacle of millions of gallons of water dropping every minute over a 167-foot-tall cliff draws tourists from around the world to Niagara Falls.

The famous cataract gets all of the oohs and aahs and photo ops. But further up the Niagara River, a nearly equal amount of water flows out of sight into two massive conduits that run for miles underneath the City of Niagara Falls. And it's these tunnels that channel the water needed to create power for about 2 million homes. The concrete tunnels have worked without fanfare or fail since their completion in 1961 as an essential component of the Niagara Power Project, the largest power generator in the state.

This month, for the first time in 25 years, New York Power Authority engineers are examining the structures up close to get a better sense of their condition.

So far, they like what they see. A preliminary report on the east conduit, which was inspected April 13, was “looking pretty good,” said Anthony Dell’isola, resident construction manager for the Niagara Power Project.

“There are some areas of accumulated debris, but nothing that’s going to cause operational issues,” he said.

The second conduit was inspected Saturday. Crews from a company called Aquatic Sciences Inc. used an unmanned, submersible vehicle that is operated remotely and relies on sonar to gather images inside the pitch-black tunnel.

The inspections, which cost about $2 million, are no small undertaking. 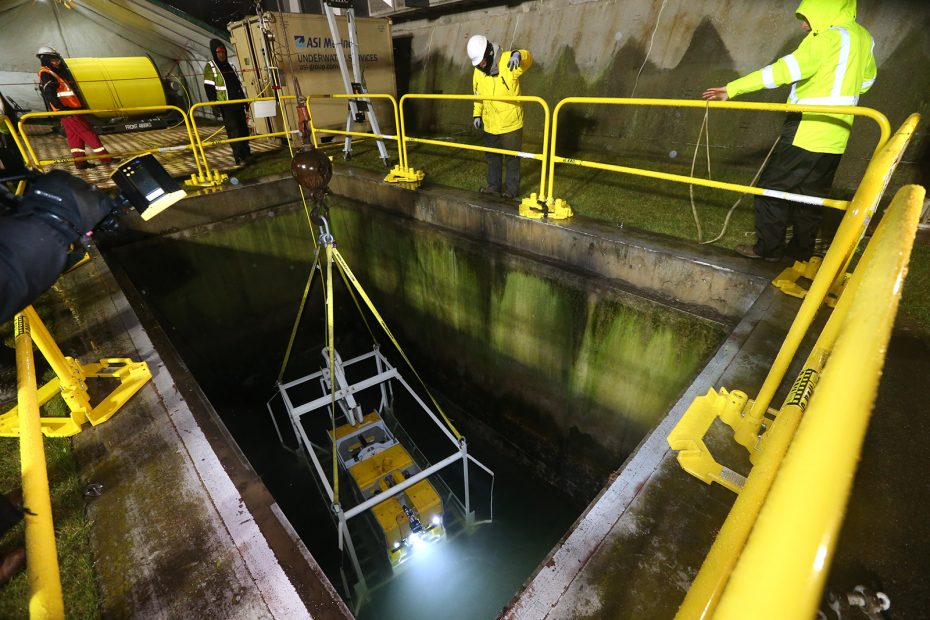 The remote-operated vehicle is lowered into the Intake 2 conduit. (John Hickey/Buffalo News)

Attached to the remote vehicle is a 6-mile-long fiber-optic cable that feeds the images back to a computer. Although the vehicle is powered, the water in the tunnel has to be relatively calm so that the cable doesn’t become like “a tail wagging the dog,” said Bill Stanton, director of mechanical engineering for the Power Authority.

The conduits were dug and built in three stages for the Niagara Power Project, which cost $800 million, took three years and required 10,000 crew members to complete in 1961. It was, at that time, the largest power generator in the world.

Each conduit is 66 feet tall and 46 feet wide and draws in up to 375,000 gallons of water per second. They empty into a body of water in Lewiston known as a forebay, which feeds both the power plant sitting on the edge of the Niagara Gorge and the reservoir holding water for future power production.

To reduce flow rates, engineers elevated the forebay water levels to align with the level of the Niagara River. Then they slowly shut a 400-ton steel door at the intake to the tunnel. (The gates to the tunnels are located inside towers along the Niagara Scenic Parkway, formerly the Robert Moses Parkway, and are easily visible from the North Grand Island Bridge.)

“The big concern is we haven’t moved that gate down since 1994. We have to get that gate down to do any inspections,” said Bill Stanton, director of mechanical engineering for the Power Authority. “And it’s critical that we get the gate back up.” 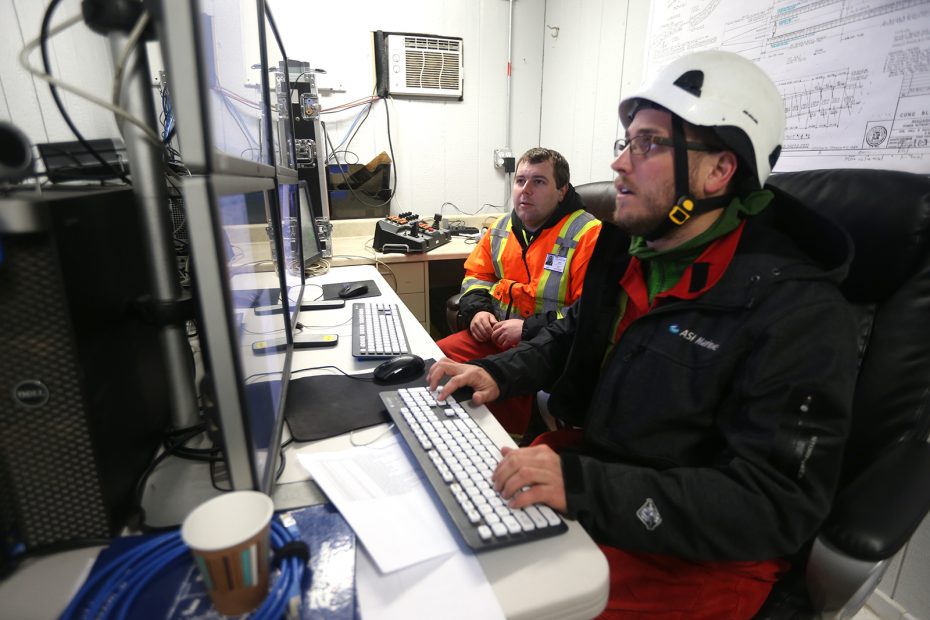 Brad Becker, top, and Jake Strom do a systems check in the control room where they will help monitor and control the submersible as it inspects a conduit carrying water from Niagara River to the Robert Moses Niagara Power Plant and the Lewiston Pump Generating Plant in Lewiston. (John Hickey/Buffalo News)

Stanton said it's never easy to predict if rust on the metal rails will throw off the alignment and cause problems.

“It took a lot of planning. The gates basically hold back the Niagara River,” he said. “It’s somewhat risky, because you’re holding back so much water.”

The remote vehicle, about the size of a golf cart, spent 14 hours in the tunnel on Saturday. It traveled at a speed of less than 1 mile per hour and stopped at any “anomalies along the way to do a further inspection,” said Patrick Roemer, construction engineer at the Niagara Power Plant. 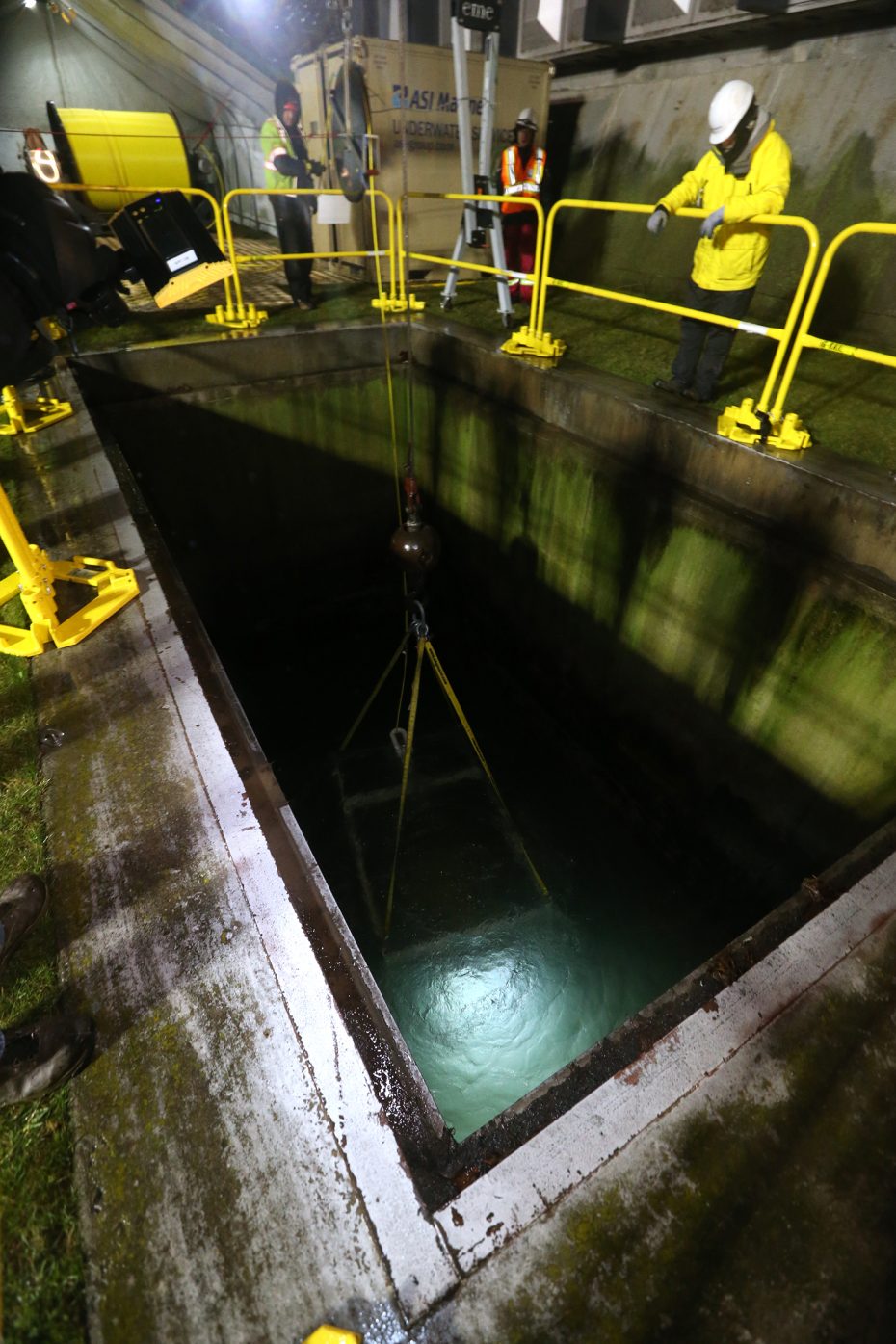 The submersible disappears into the Intake 2 conduit. (John Hickey/Buffalo News)

Dell’isola said engineers will examine the images over the next several weeks, “mostly just making sure the conduits are functional, intact and that they haven’t heaved or if there’s any leakage.”

The sonar images are capable of detecting cracks as small as a quarter of an inch, he said.

The Federal Energy Regulatory Commission requires that the inspections happen every 25 years. In the last inspection in 1994, the Power Authority used a manned submarine.

The inspections were done this month because April typically is a time of lower power usage.

“We picked a time period where we could dial back the power plant as much as we need to,” said Dell’isola. “Our total capacity is 2,650 megawatts. Right now, we’re running at 770 megawatts.”

If the inspections reveal any problems with the tunnels, the Power Authority would likely do spot repairs, said Dell’isola.

The Power Authority owns the property beneath which the tunnels run some 40 feet underground. There are no permanent structures on top of them, said Lou Paonessa, a spokesman for the Power Authority. A large section of tunnel runs underneath Hyde Park Golf Course and athletic fields.

“If we had to do anything, we don’t want to have to move a building to get there,” Paonessa said. 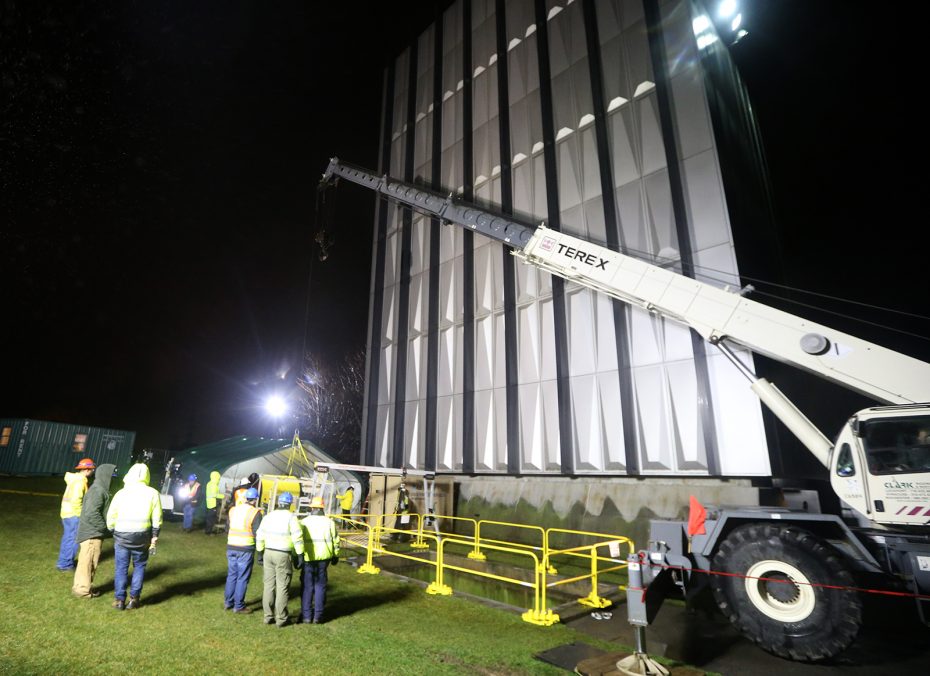 The scene as workers from the New York Power Authority and ASI Marine lower the submersible into the Intake 2 conduit. (John Hickey/Buffalo News)