Jennifer Taggart stood in the center of a ring, pointing to a mat painted with grids, diamonds and dots, and instructed her boxer to position his feet parallel to a line. She demonstrated a pair of quick jabs, narrated them with a “Pop! Pop!” and looked her trainee in the eye.

This is not his usual uniform.

This is Jack Quinn, the former Republican congressman-turned-college president, a man who spent a career in suits and ties and being the boss. But he’s not in command anymore.

Parkinson’s disease is. Quinn was diagnosed with the disease in December 2014, while still president of Erie Community College. He kept his health largely secret for the next three and a half years, but he’s not doing that anymore. 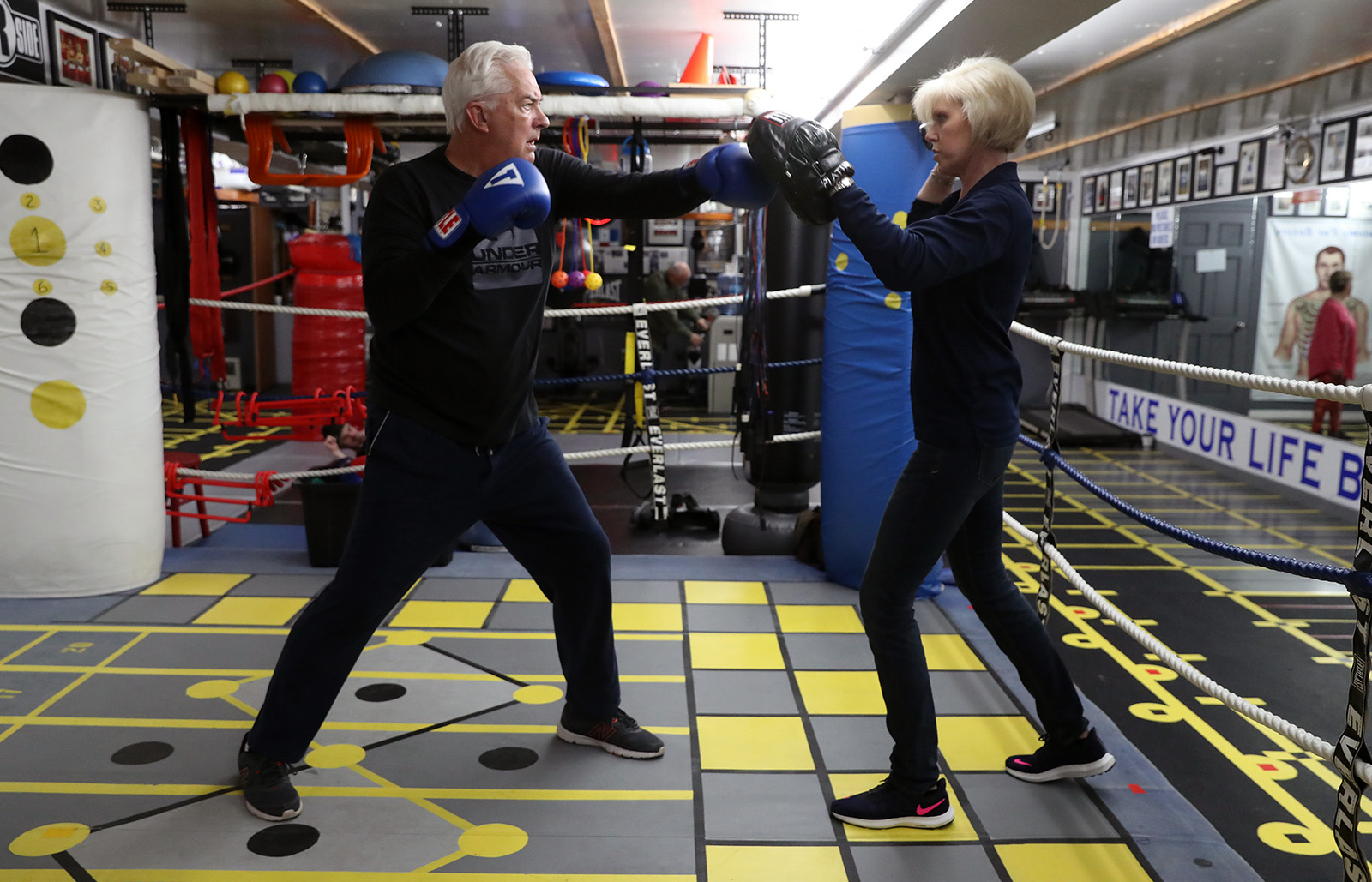 The going public part is about sharing. Quinn is now speaking openly about having Parkinson’s, an incurable disease that inhibits the body’s ability to control its movements. 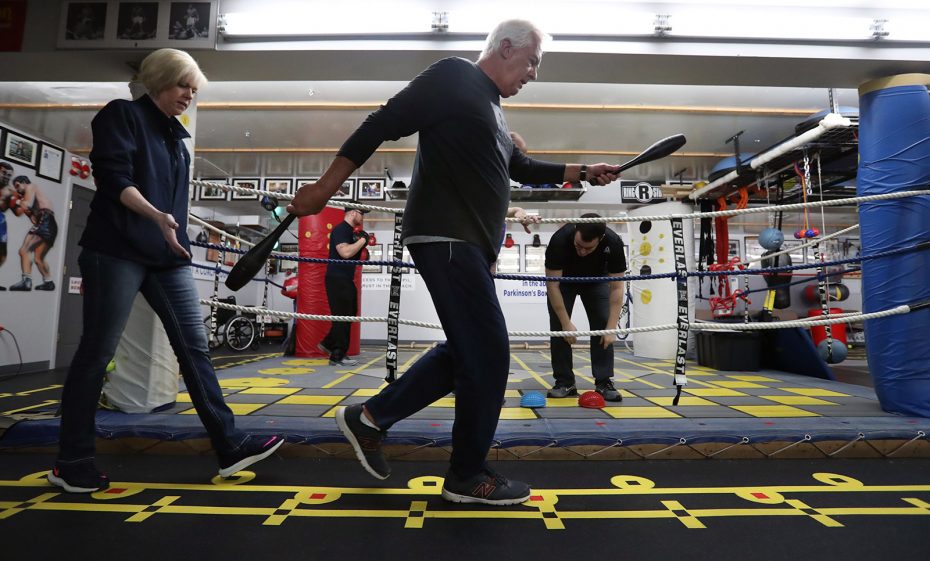 “Come on!” Taggart instructed Quinn, telling him to throw punches at the padded mitts on her hand.

“You can work with it,” continued Quinn, who is now a senior adviser for the Buffalo law firm Barclay Damon. “You can be productive. There’s no reason to keep it a secret.”

Quinn is one of about 100 clients who train at Parkinson’s Boxing, which is owned by Dean Eoannou, a 65-year-old former Ford plant shift manager and longtime boxing trainer. The results achieved by Eoannou and his staff over the last four years are stark: Clients who could barely stand are now walking on their own. Many have dramatically reduced their daily pill consumption. An octogenarian just signed up for a 5K race. 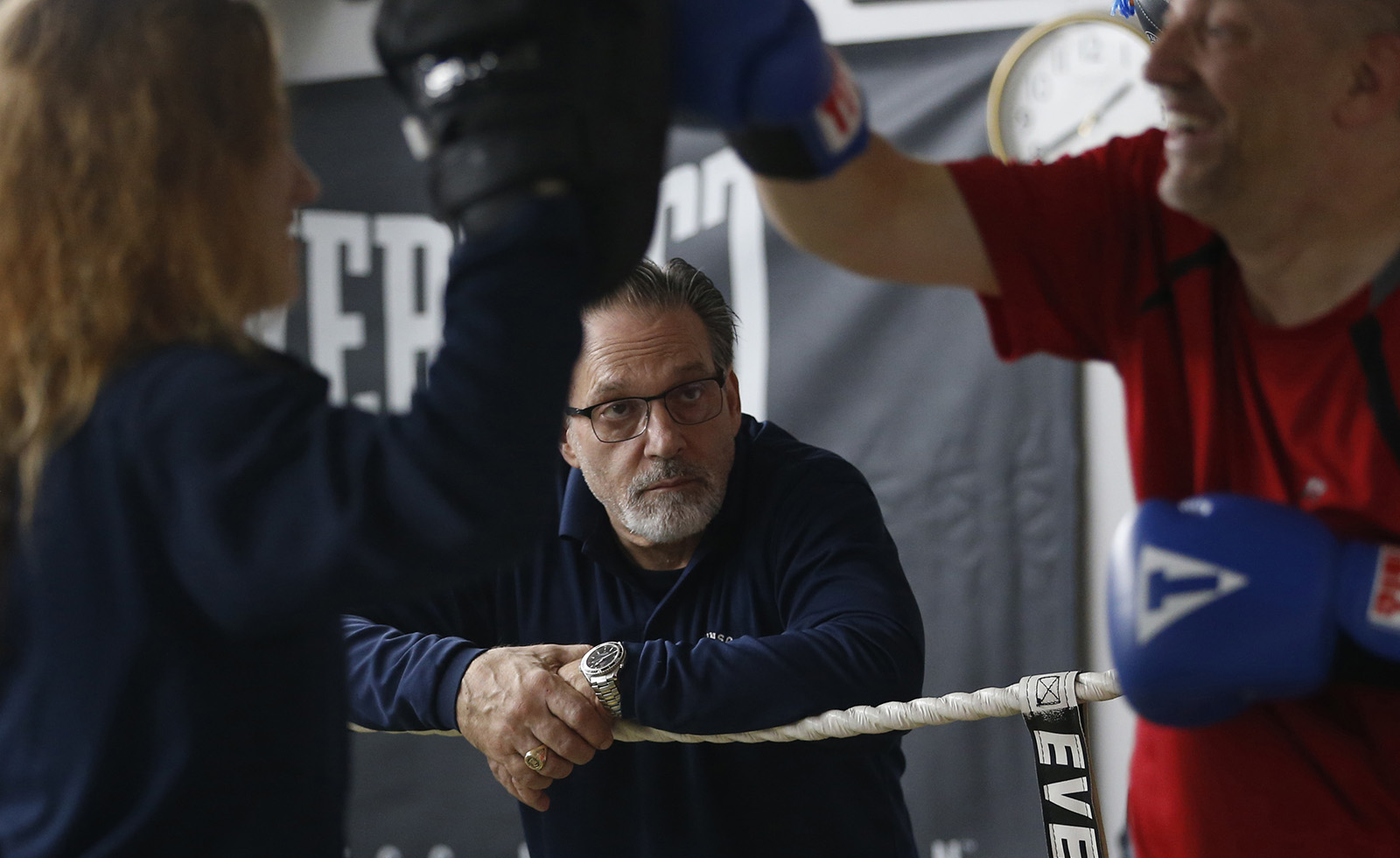 Watching a TV show about how boxing could alleviate Parkinson's symptoms was life-altering for Dean Eoannou, owner of Parkinson's Boxing in Kenmore. "I stopped training fighters that day," Eoannou said. "I got rid of all my boxers and devoted my gym full time, seven days a week, to working with Parkinson's patients. The most fulfilling, satisfying thing I have ever done." (Sharon Cantillon/Buffalo News)

The results of the program four years later are impressive enough that a major Western New York health insurer just agreed to cover it.

“I tell folks regularly, ‘You never know where the next great idea is going to come from,’ ” said Dr. Michael Cropp, CEO of Independent Health.

When Cropp says that, he’s usually referring to medical people doing “exciting and innovative things.” That could be a doctor, pharmacist, physical therapist or chiropractor thinking outside the box.

He looks like a boxing coach: broad shoulders, thick glasses, gray beard. Eoannou has the look of a man who can teach someone to jab, dance and deliver a glancing blow. He did that for years as the University at Buffalo’s club boxing coach, but his focus began to change through circumstance in November 2015.

Eoannou’s wife showed him a television segment about Parkinson’s patients using boxing skills as a tool for regaining physical abilities. Around the same time, Eoannou’s dentist asked him if he could help her husband, who was combating a disease similar to Parkinson’s.

The concept of treating Parkinson’s with boxing wasn’t new, and it has been available around the country, including in Buffalo. Eoannou, though, took it upon himself to develop his own program. “The reason I’m here is I was too stupid to realize it couldn’t be done,” he said. “I hate teaching something I don’t understand. I read every book I could read. I used to get up at 5 in the morning and read.” 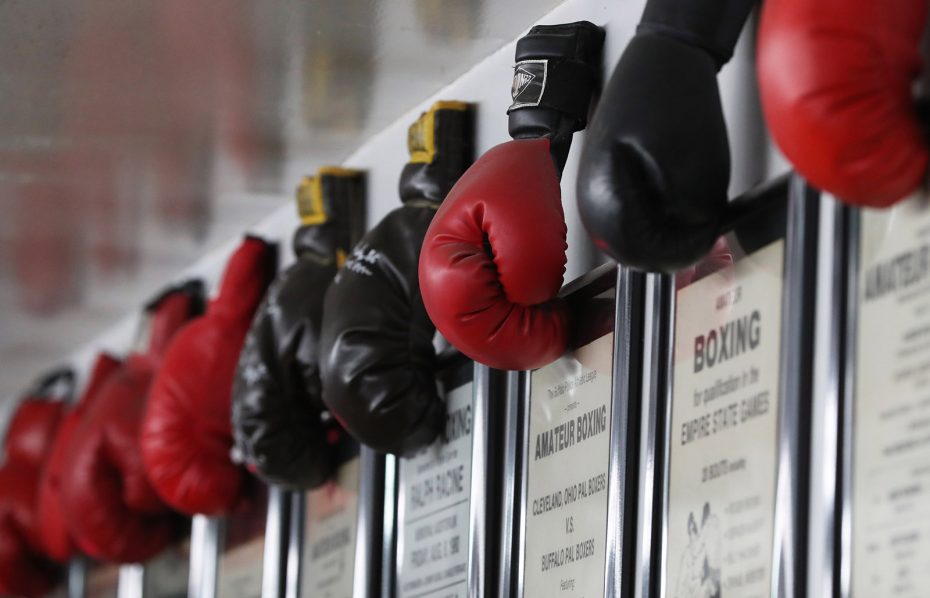 One way Parkinson's Boxing helps clients is by teaching them a series of punches that can be worked and reworked into dozens of patterns. (Sharon Cantillon/Buffalo News)0

Parkinson’s affects the brain’s ability to produce dopamine, which helps transmit information to the body. Parkinson’s manifests itself differently from person to person. It can cause tremors, affects a person’s gait, slow movement, inhibit speech, and more. Though Parkinson’s is incurable, there is hope in neuroplasticity, the brain’s ability to form new connections. By learning a new and challenging activity – like boxing – the brain can actually reprogram itself and start to work around the disease.

Eoannou embraced neuroplasticity and starting designing a boxing program aimed to constantly challenge his clients. It involves learning balance and footwork by following an intricate series of lines and dots painted both in his boxing rings and the track surrounding it, and learning a series of punches that can be worked and reworked into dozens of patterns. 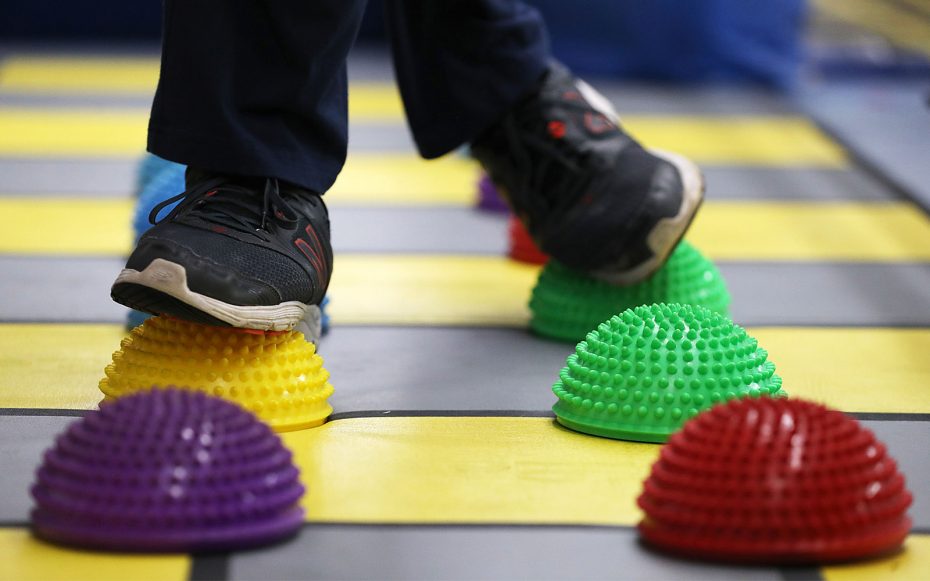 One of the workouts improves balance by having clients do different step patterns on the versa balls. (Sharon Cantillon/Buffalo News)

The idea is to not just exercise, but to build on skills. Once one challenge is achieved, a new one follows — and that is what helps reprogram the brain and stave off the effects of Parkinson’s.

For the past few years, Eoannou has been constantly building the program. Jeff Quinn, the former congressman's younger brother, was diagnosed with Parkinson’s nearly a decade ago. He became a client of Eoannou and is now a member of his six-person staff.

Early on in his time as a client, Jeff Quinn would show up for his 10 a.m. Thursday training sessions and Eoannou would consistently throw a new exercise his way. “He’d say, ‘You’re not going to believe what I thought of for you to do this week,’ ” Jeff Quinn said. “There was always something different, more challenging.”

Jeff Quinn, who has few – if any – visible signs of Parkinson's, is now a fixture at the gym as a trainer. One of his clients, 82-year-old Helen Botti, just signed up to participate in a 5K race in June, where Quinn and others from the gym will be joining her. 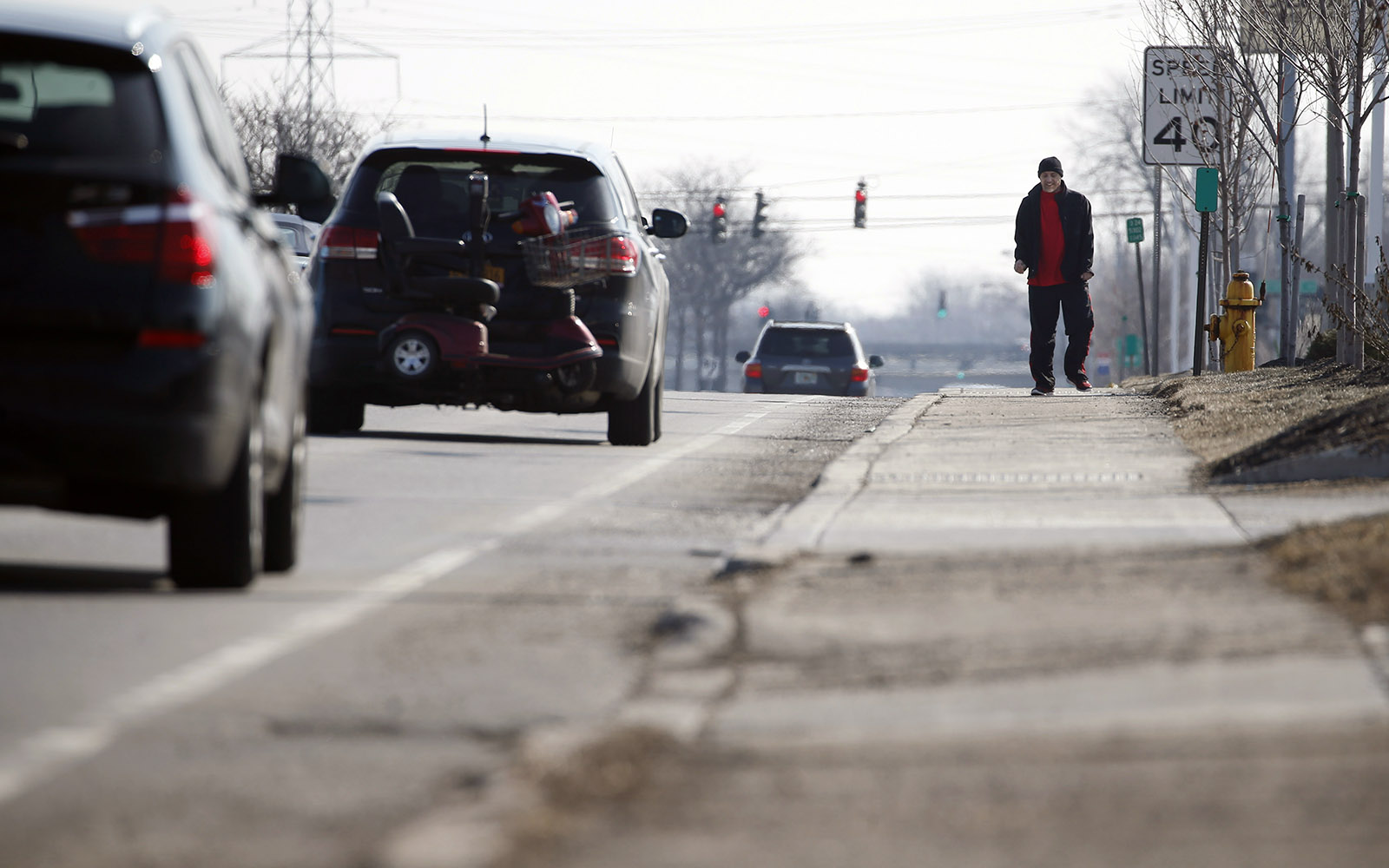 Tony Musilli was Dean Eoannou's first client. Before he started going to Parkinson's Boxing, he could not stand on his own; now he walks 5.7 miles each way to and from the gym, seven days a week. "I've got to do it," he says, "or I'll become a vegetable." (Sharon Cantillon/Buffalo News)

Eoannou’s original client, Tony Musilli, who has a condition called multiple systems atrophy, struggled to walk when they began working together in 2015. Now, the 52-year-old works out at the gym every day and walks 5.7 miles each way to get there.

Another client, Michael Todd, was diagnosed with Parkinson’s 21 years ago. On a recent morning, Todd was dancing around the ring with his trainer, Wendy Casey, throwing punches into her mits as she pushed in on him. (The boxing training never involves striking the patients; only the patients throw punches.)

“Now she’s making him work laterally on the balls of his feet,” Eoannou said as Todd aimed his jabs into the center of Casey’s mitts. “Look at the pressure she’s putting on him.” 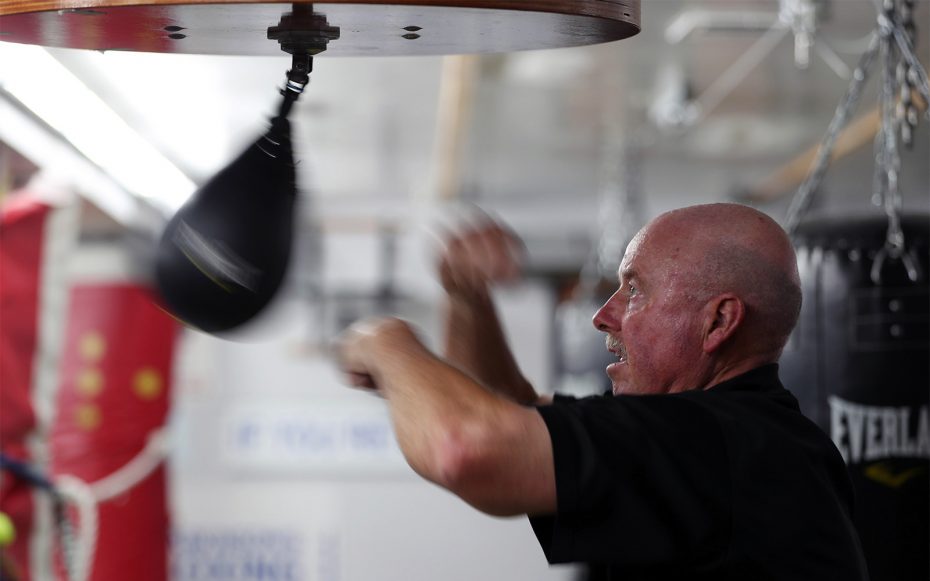 That pressure is constant learning; it’s what reprograms the brain and works around the Parkinsons. For Todd, the results have been dramatic: He has cut his former medication regimen of 42 pills a day in half.

“Boxing has allowed me to take control of this disease,” Todd said, “instead of Parkinson’s taking control of me.” 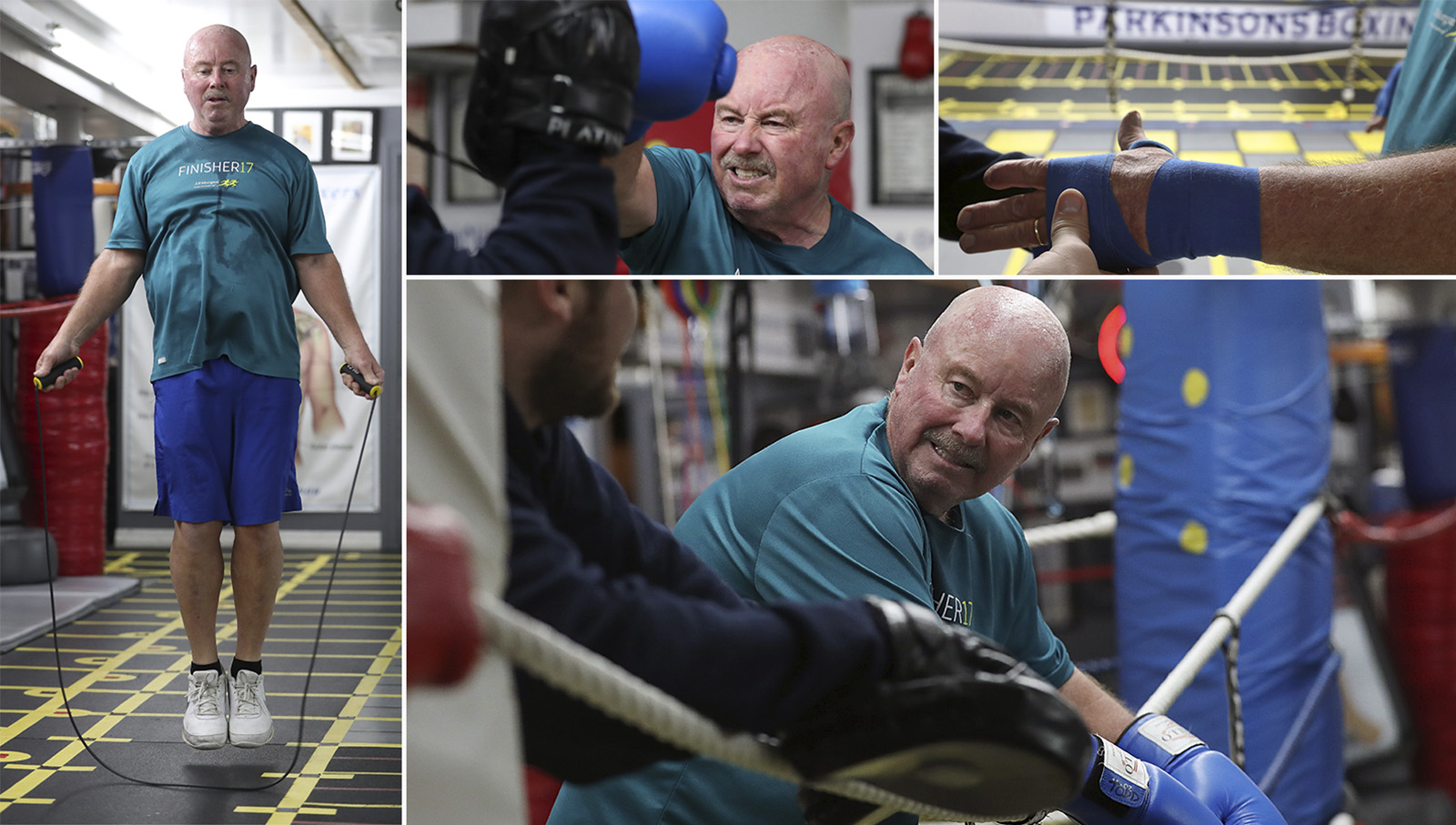 Michael Todd was diagnosed with Parkinson’s at age 39. That was 21 years ago, so he was deep into his battle with the disease when his wife, Linda, found Eoannou’s gym in May 2016. Since then, he has cut his medication in half and dropped 40 pounds. (Sharon Cantillon/Buffalo News)

Treating Parkinson’s is expensive. Independent Health's Cropp told The News in a recent interview that the insurer has more than a thousand members with Parkinson’s and similar diseases and spends in excess of $23 million a year to treat it.

Cutting down on medication and other expenses is a health-saver, of course, and it could be a dramatic money-saver, too. Though the success of Parkinson's Boxing today is quantified only by examples and anecdotes, the prospects are strong enough that Independent Health has agreed to offer it as a benefit.

“Sometimes, intuitively, you just know,” Cropp said. “In this case, we didn’t have any data. We just knew that this would be the right thing to do, and it would more than pay for itself.” 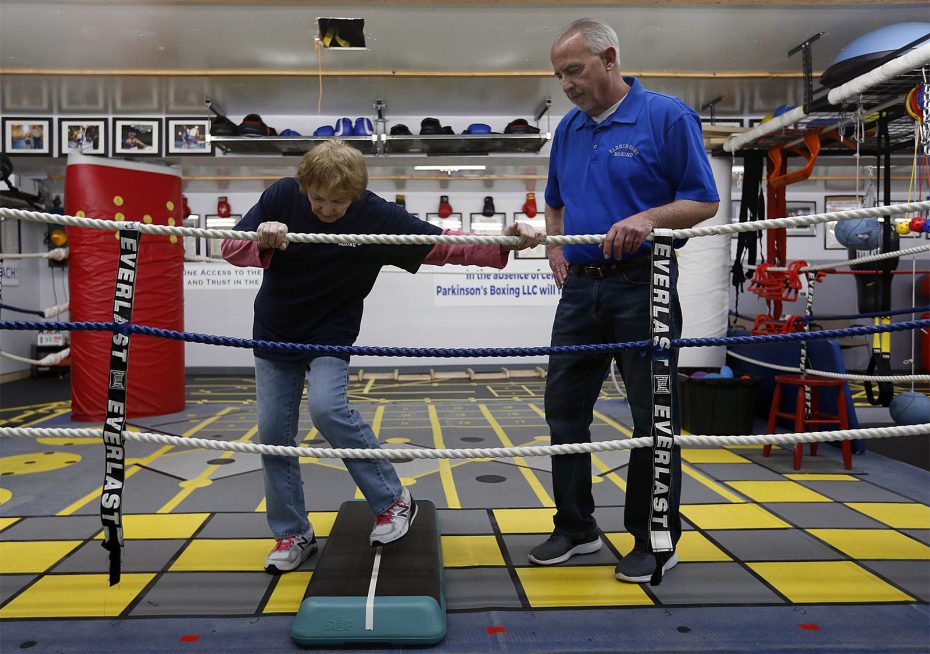 Helen Botti, 82, of the Town of Tonawanda, a longtime runner, wants to run again. When she came to Parkinson's Boxing in May 2018, she walked with a walker. Now she hopes to run in a 5k race in June. (Sharon Cantillon/Buffalo News)

Independent Health recently reached an agreement with Parkinson’s Boxing to cover the majority of the costs for two one-hour sessions each week. Eoannou charges $50 a session.

“This is highly innovative,” said Robert Tracy, an Independent Health senior vice president who oversees the insurer’s Medicare product line, which will include Parkinson’s Boxing. “I can’t say enough about how just being in that gym, and seeing and hearing those people who are so passionate about what they’re doing, who don’t have any medical background whatsoever, but they’re actually helping people with an improved quality of life. It’s just moving.” 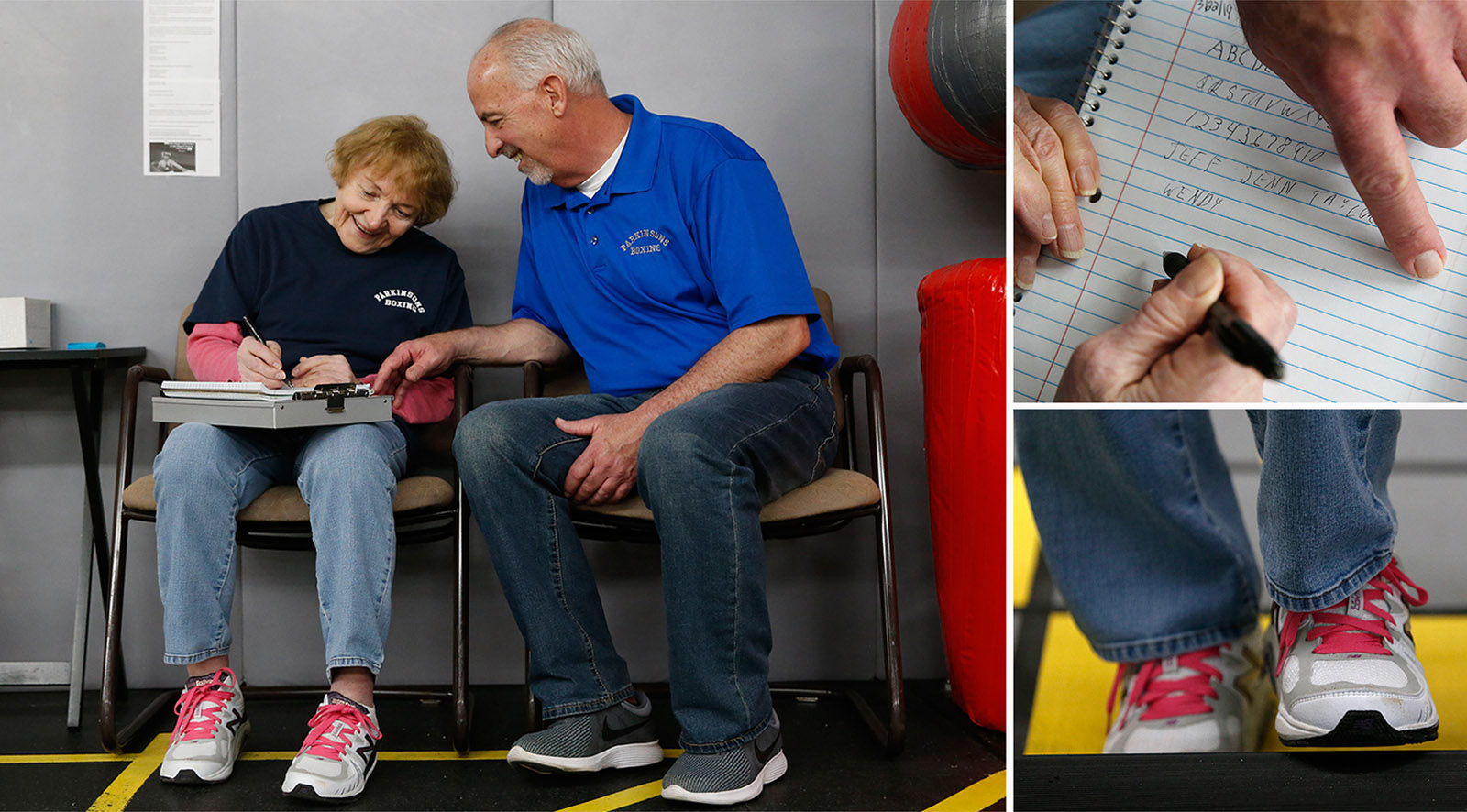 82-year-old Helen Botti used to run marathons. But when Botti first started working out at Parkison’s Boxing one year ago, the disease affected her physical capabilities so deeply that her trainer, Jeff Quinn, had to help her stand and walk. (Sharon Cantillon/Buffalo News)

Cropp calls Eoannou’s decision to meld his boxing background into a Parkinson’s program “a stroke of genius” and says it is a “window into the future.”

“Health care really needs to look beyond the traditional view of things, that everything is fixed to the pill or procedure,” Cropp says. “There’s a lot more we can do to help people in some behavioral changes and some daily choices that they make that can make that can help lead to a healthier life.” 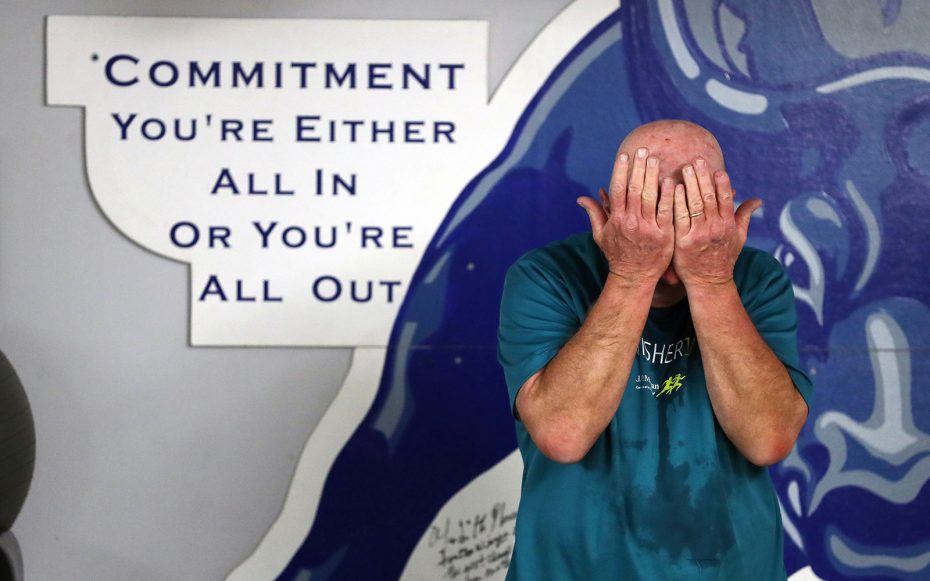 “Some days I feel that I am in slow motion and it takes a long time to do even simple things such as tying my shoes,” Michael Todd says of his Parkinson's. “When the meds have kicked in and I feel better I call it feeling ‘above the line.’ With boxing I can go for a longer period where I feel good before I start feeling sluggish again.” (Sharon Cantillon/Buffalo News)

Quinn hopes for the same. His decision to go public with his Parkinson’s diagnosis followed a deep conversation with his wife, Mary Beth, who is a nurse, and adult children Jack Quinn III, who is a lawyer and former New York state assemblyman, and Kara Burke, an executive at Rich Products in Buffalo. The younger Quinn pointed out that his father, as a former congressman and college president, has the ability to draw attention to the disease and potential treatments. That includes boxing, and Quinn has become a staunch advocate for Eoannou’s program. Though Parkinson’s Boxing was already on Cropp’s radar thanks to a friend who is a client, Quinn was involved in those recent conversations, and is talking to other insurers too.

“Mike Cropp said to me, ‘Jack, I think this is transformational,’ and I agree with him,” said Quinn.

He told the Independent Health leader: “This could be a model for the country.’ ”

'The Intervention' convinces Jack Quinn to stop hiding his Parkinson's 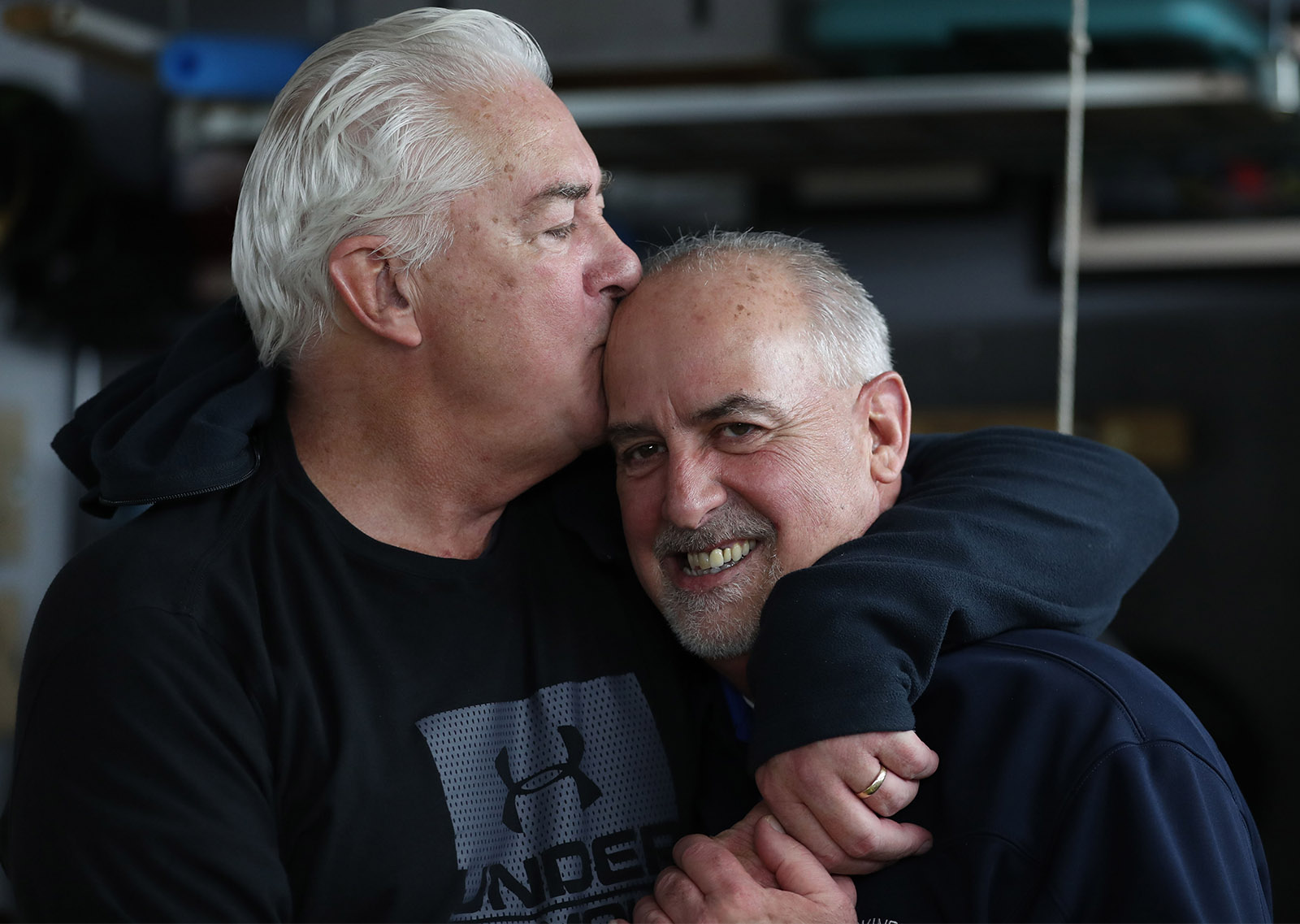 “When Parkinson’s takes a day off, you get a day off,” Jeff Quinn, right, sometimes says to his older brother Jack. “Otherwise, you get to the gym.” Jeff Quinn learned he had Parkinson’s nine and a half years ago. Today, his symptoms are largely gone – or at least unnoticeable to observers. (Sharon Cantillon/Buffalo News)