Those who watch others work through the stretches, poses and meditation that come with yoga only see part of an ancient practice that has grown during the Buffalo resurgence.

The most ardent practitioners in the region – whether instructors or students – also know it has the power to help them better navigate the twists and turns of life.

Its attention to breath demands focus, which quiets the mind.

And the collective spirit in any yoga class underlines that no one need journey alone.

Such power helps explain why the number of yoga studios has doubled in the region – to about 40 – during the last five years, and why classes now can be found far beyond the bounds of fitness centers to include Roswell Park Comprehensive Cancer Center and other health care settings, parks and waterfront properties, senior centers and addiction treatment facilities.

It was only a matter of time before kids would get in on the act, too.

“Children who practice yoga learn concentration,” said Elizabeth Blinkoff, owner of Lizzie’s Little Yogis in Clarence. “They learn body awareness. They learn sensitivity. They learn to accept themselves as themselves.”

Here’s a closer look at three ways yoga instructors are making the practice more accessible to kids in the region. 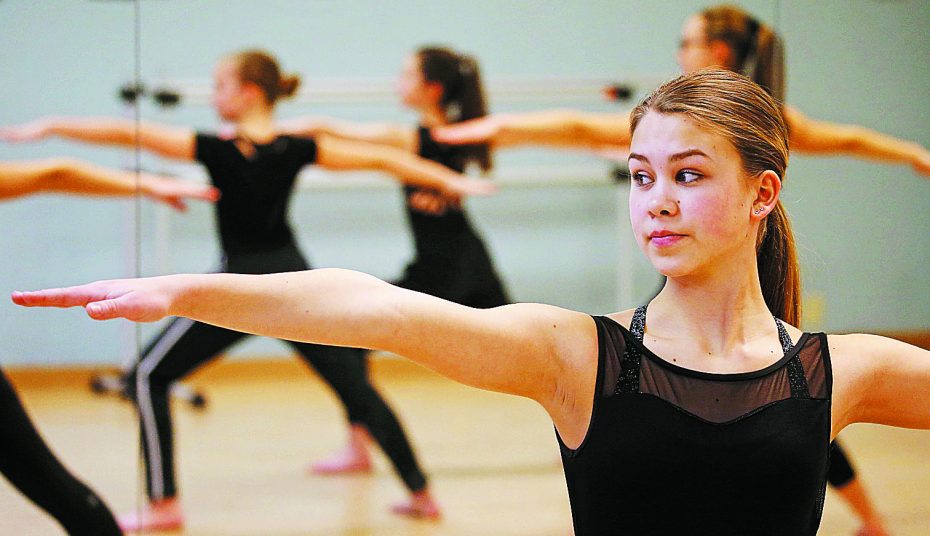 Izzy, Duell, 14, and her classmates at Buffalo Dance Studio in Elma use yoga to stretch and warm up for their dance classes. (Robert Kirkham/Buffalo News)

Ten-year-old Callie Barber of Lancaster packs school, art club and four dance classes into her weekly schedule, a demanding itinerary typical for her friends and classmates.

“It’s a lot of rush, rush, rush,” said her mother, Kristy. “Even just sitting down and finding time to have dinner together as a family sometimes can be challenging. We’re constantly filled with activities of some sort – and I only have one child!”

Dance center owner Stacey Wawrzyniec has found one way to help Callie and other students in many of her dance classes: start with yoga. Her charges in those classes – mostly girls in middle or high school – have told her that even a few minutes of deliberate work eases the stress that comes with academics, after-school activities, social media and other pressures.

“I thought it was a little different but it made me more calm,” another student, 10-year-old Lauren Wagner, also of Lancaster, said before a recent class.

“What most people think of yoga is the physical practice of it,” Wawrzyniec said. “That’s really only one part. There are so many other layers. It’s really a lifestyle of being present in the moment, taking on responsibilities, taking inventory of how you’re really feeling, and your responses to those feelings.”

Wawrzyniec, a lifelong dancer, turned to yoga three years ago after her mother, Bonnie Pitts, died from a brain tumor at age 57. “I found it as a therapeutic release,” the now-certified yoga instructor said. “It helped me cope with some of the emotions that I was feeling.”

The experience led Wawrzyniec to learn about the Art of Yoga Project, a national effort to help steer at-risk, exploited and incarcerated girls toward better accountability to themselves, others, and their community. Wawrzyniec received a $3,200 training grant and will soon start teaching yoga to adolescent girls in residential programs at Gateway Longview and Baker Victory Services.

“I’m worried about how things in the life of a child that they don’t have any control over shape what they think of themselves, who they are, and what they may or may not be able to accomplish in their lives,” she said. “My hope is to give them hope, to not feel that their life is limited based on the choices the adults in their lives are making.” 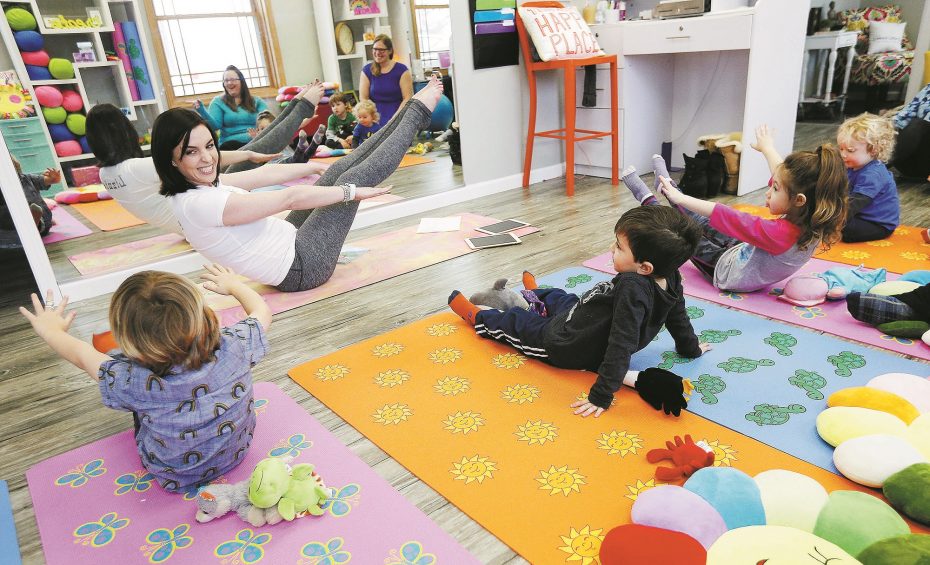 “Children who practice yoga learn concentration,” said Elizabeth Blinkoff, owner of Lizzie’s Little Yogis in Clarence. “They learn body awareness. They learn sensitivity. They learn to accept themselves as themselves.” (Robert Kirkham/Buffalo News)

A diffuser blew a lavender and wild orange mist over the yoga mats on a recent Friday evening at Lizzie’s Little Yogis. Several young children ambled onto colored mats emblazoned with suns, butterflies and turtles, then sat “crisscross applesauce” to get started.

The kids soon moved into boat pose, then downward dog. “As we create happiness, we bloom,” Blinkoff said. “As we bloom, anything can happen.”

Anything did. Some kids paid attention. Others didn’t. “Miss Lizzie” focused only on those who followed directions, or tried, complimenting them as a recording of “This Little Light of Mine” played.

“I don’t pay attention to negative behaviors because I am a firm believer that if people get attention from a behavior, it’s going to continue,” Blinkoff explained after class.

She holds a bachelor’s in education from SUNY Buffalo State, a master’s in school counseling from Canisius College, and a post-master’s in Applied Behavior Analysis from Penn State University. She and other certified child yoga instructors teach students aged 4 months to 8 years old six days a week at her studio, which opened last fall as a place where “kids get to move their bodies, listen to their bodies, and feel heard and understood,” Blinkoff said.

The yoga portion of her classes run 15 minutes. Then it’s off to an activities room to draw artwork for the same amount of time, then into tiny nearby teepees to relax.

“My son looks forward to coming and he gets a variety of things I’m looking for: socialization, listening, and things I haven’t seen anywhere else, like introducing kids to meditation. These are skills that even adults don’t have yet,” said Janice Stern, of Lancaster, who regularly brings her son, Leon, 3.

“Yoga allows children to relieve some emotions that are stuck inside in a way that nothing else can,” Blinkoff said. “Different poses are designed to do that.”

More little yogis here are boys than girls. “Everybody is shocked by that...,” the studio owner said. “Boys are very high energy and this is a really good way to get it out. I tell them that professional football players do yoga, professional hockey players do yoga. They do yoga because it makes them strong and able to concentrate, and better at what they love doing.” 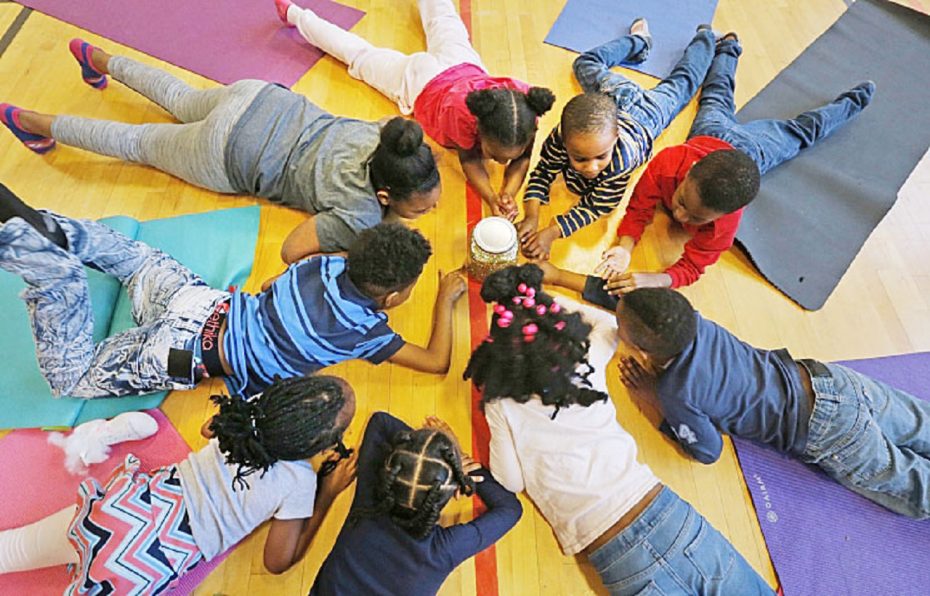 Students relax as they are told to take a deep breath and watch a globe full of water and glitter during a yoga class in the gym in Bennett Park Montessori School. (Robert Kirkham/Buffalo News)

Yoga speaks to these kids, too.

Catherine Cook-Cottone, a University at Buffalo professor of educational psychology, has helped prove that since establishing Yogis in Service (YIS) in 2015. The nonprofit organization has gained traction in circles where trauma is part of life – no matter when or where it strikes, or what kind. The YIS brand of yoga adheres to principles designed to build empowerment and worth, safety and mindfulness, grit, self-compassion and self-determination.

YIS began by teaching free yoga in a Buffalo church. Today, its instructors lead 20 classes in settings that include jails, domestic violence centers, schools and places of worship. Participants range in age from babies to seniors in wheelchairs.

“Here we still do songs, we still do art and stuff like that,” she said, “but it’s a little more geared on how we take steps to help us in our everyday lives.”