Patrick Bush and Eric Fontaine were waiting for a Metro bus at the Black Rock-Riverside Transit Hub a few days ago as a cold drizzle fell outside their heated enclosure.

The Niagara Frontier Transportation Authority promises more enhancements like that one at Niagara and Ontario streets, but even amenities don’t seem to impress these commuters. The bus riding experience itself, they say, leaves much to be desired.

“You get all kinds of crazies arguing with the driver,” Fontaine complained. “I don’t have anything against the homeless, but they’ll buy an all-day pass and stay on the bus the whole time.”

Metro officials take issue with this pair’s allegations (surveys say more than 90 percent of riders think buses are clean), but they know that little complaints add up to a big problem: Commuters continue to abandon Metro buses and trains.

“It’s an acknowledged fact that ridership is down,” said Thomas George, the NFTA’s director of public transit. “It’s an issue in Western New York and it’s an issue across the nation.”

That’s why authority officials are joining big city transit systems such as New York, Los Angeles and Washington in adopting new measures to counter the decline. The NFTA aims to drive up ridership with a new plan centering around improving service, expanding communication, enhancing the customer experience, and partnering with other entities.

That could mean buses that occasionally stop only at major gathering points or that skip some stops to more quickly accommodate the bulk of their riders. It could mean more heated bus enclosures like the one at Black Rock-Riverside, developing new phone apps for riders, and other measures.

“Rather than just rub our hands and worry, we’re getting proactive and creating initiatives to drive ridership,” George said. “We can at least try to use the tools we have at our disposal.”

Indeed, Metro bus and rail ridership has dipped from a recent high of about 30 million passengers in 2012 to around 25 million last year. The drop mirrors national trends showing an 11 percent decline in bus ridership during the same period.

George said all kinds of factors – the economy, local job opportunities, gas prices, service options – contribute to whether bus and train seats are filled. And the flip side of the area’s strong economy is a lessened demand for public transit.

“We’ve got a fantastic economy; jobless numbers are at a historic low,” George said. “Even if you take low income individuals out of the equation, along with that comes car ownership.”

As a result, the typical Metro rider is a working-age adult with low income and no access to a personal vehicle. The largest group of Metro riders (24 percent) earn less than $5,000 annually, according to authority statistics, while those earning more than $100,000 make up only about 2 percent of those on buses and trains. 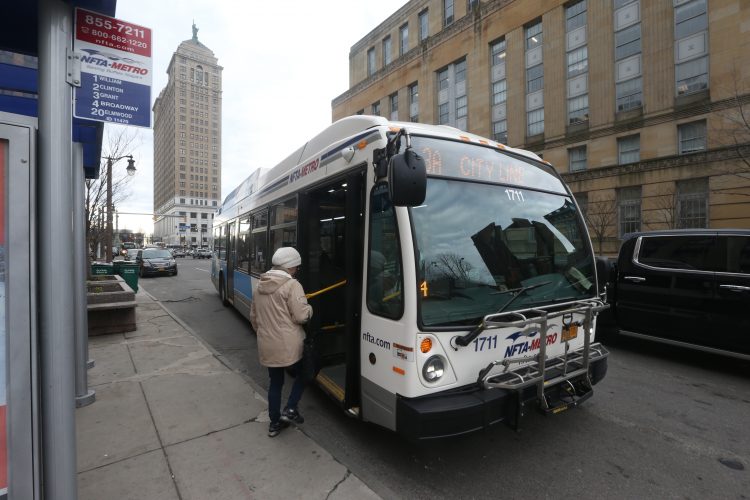 Riders board a bus in Buffalo. (John Hickey/Buffalo News)

In addition, George said Buffalo offers a relatively easy commute for those with cars, and he labels downtown parking “very, very affordable.”

“It comes down to economic decisions made in households every day,” he said, adding that the NFTA must offer enough incentives to make transit attractive.

The most ambitious initiative may involve “skip stop” bus service, involving options within specific routes to more quickly get people to their destination.

“Say this route has 40 stops with 10 or 12 that have good ridership and others are much lower,” George said, explaining that route planners may alter stops on some buses to serve only the busiest. That could decrease commute times on those buses, while other buses would still stop at all stops on the route.

Several years ago the authority also increased bus frequency, with a resulting positive impact. It may also offer increased service on certain routes until 6 p.m., and then drop to a lower level at night. And the new fare collection system – featuring cards inserted in stadium-style turnstiles  – to be implemented later this year should make the system easier to use and further “break down barriers,” George said.

“We want to encourage folks who haven’t tried public transit, telling them they can knock off five emails while on the bus,” she said. “We call it Metro-tasking.”

Target groups will include young people living downtown where transit is concentrated, and there will be an emphasis on use of the authority’s app that provides bus and train information, including arrival times. The app’s use needs to be expanded, George said, especially for occasional riders en route to special events like the recent Justin Timberlake concert or the Frozen Four at KeyBank Center.

“Just in the two weeks we’ve had it out, we’ve seen significant growth,” he said.

The NFTA also seeks to develop new partnerships with the City of Buffalo, the Buffalo Bisons and biking groups – which could carry their bikes aboard Metro – in conjunction with special incentives.

And plans call for better bus shelters. The authority is already replacing worn-out, standard shelters, and looks to others with amenities like the one at Black Rock-Riverside. Its most ambitious plans call for a block-long “linear transit hub” along Division Street between Ellicott and Main streets – home to the busiest stops in the system.

It would provide transit riders with a one-stop facility to connect with outgoing and incoming buses, as well as with Metro Rail at the Church Street Station. Plans are ready for when the $3 million for its construction becomes available.

George acknowledged that even with all its advantages, transit is not for everyone. But the authority sees opportunities in many groups, especially young people who in other cities are abandoning cars and embracing transit in a more urban lifestyle.

“We certainly have to be located in areas that work for people,” he said, “and there is an ability to make that happen.”