I felt a pang in my heart earlier this month when I heard Noco will sell 33 of its Express Shops (plus a Noco fuel terminal) to Ohio-based Marathon petroleum, which will turn them into Speedway stores.

I put myself through college at two Noco stores in North Tonawanda, working double shifts and midnights.

One of my old stores has since been turned into a Little Caesars. I go there sometimes, just so I can reminisce while I wait for a pizza, standing in the same spot where I spent thousands of hours behind the register.

It's the same view through the window, where I used to check the competition's gas prices with binoculars so we could match them. The cigarettes were in racks above my head and I had to count every single pack at the beginning and end of each shift. If someone bought a pack before I was done, I had to go in, erase numbers and adjust totals. It happened roughly every two minutes and was supremely annoying.

There were adult magazines displayed under an open counter behind me. To this day, I get a creepy feeling if I'm talking to someone and their eyes wander to the area behind my knees.

On Mondays we would get our "Tripi" order, and the store would be filled with dozens and dozens of plastic bins full of new inventory. My managers, Jen and Amy, and I would pull out our price guns (I loved those things – until they jammed, and then I hated them) and we would motor through all the new stuff, pricing every single pack of gum and strip of beef jerky, stocking the store to the gills. One of us would have to stop to wait on a customer every 30 seconds or so, but we would zoom through the store as graceful and determined as honeybees. There was nothing more satisfying than adding another empty blue bin to the pile.

I could do my homework between customers when all my other work was done. Without that perk, I never would've been able to work full time and go to school full time.

I saw people at their best and at their worst. There were people who brought me dinner and Christmas presents. Then there were those who pounded on the locked cooler doors and screamed at me because I couldn't sell them beer after 2 a.m.

A wave of consolidation sweeps away familiar convenience store names

One woman came in and told me she was quitting smoking and that if I sold her any more cigarettes, I'd "be sorry." Then she came in a couple of days later, staring into my soul like she was ready to kill me and said, "Give me my cigarettes and don't you dare give me any trouble."

Seriously, I was robbed at knifepoint once and that was the least of my troubles.

At least that guy didn't call me names. He just told me to give him all the money and then wait in the bathroom. I stood in there with my foot jammed against the door, armed with a snow brush and a can of air freshener to spray in his eyes. When I was pretty sure he was gone, I did "SOS" in Morse code with the outside lights. It didn't work. All I could think was, "You people can't leave me alone for five minutes to count cigarettes, but when I'm literally sending distress signals, you stay away for a solid 20 minutes?"

Not knowing whether he was gone (he was) I had to come out with my weapons blazing and lock the doors as fast as I could. I hid under the counter and called the police, who were there in seconds. The guy was never caught.

I'm sure a lot has changed in the convenience store industry in the 16 years or so since I worked there. But there are some things I bet remain the same for gas station workers everywhere.

They don't set the gas prices. Whenever gas prices would go up, I would have to take this long pole with a suction cup on the end and change the numbers on the big sign outside. Customers would see I was raising the prices and start yelling at me, as if it were my idea to charge them more for a tank of gas.

Maybe they really did believe I was pocketing the price increase to buy more of those stylish green polo shirts and pleated khakis I wore to work. Or maybe they were miserable human beings and I was just a convenient target. Either way, if you've ever yelled at a convenience store clerk, especially for something that's beyond their control, I can confidently say that you're a horrible person and nobody likes you.

The cleaning and stocking never end. You know that scene in "Magic Mike XXL" where Joe Manganiello goes into the convenience store, breaks open a bag of Cheetos and pours water all over his body? I don't care how tall and sexy he is, all I see is the floor I just mopped, the cooler I have to restock and all those stupid Cheetos that need to be swept up (which probably rolled into very hard-to-reach places).

They can't catch a break. If you walk in to pay for your gas and the cashier jumps to the register with a mouthful of food; sorry, they can't help it. You just interrupted their lunch break.

If, like I did, the cashier works alone, there is no one to relieve them for their lunch or other breaks. That means they have to grab a bite here and there when they can, and most likely eat right at the register.

Murphy's Law never failed. Any time I would dash away for a bathroom break, I would hear someone come in and start pounding on the counter, "Hello?! Anybody in here?"

The house always wins. You would not believe the amount of scratch-off lottery tickets we sold. One guy used to buy an entire $250 roll of Loose Change or Lucky 7's at a time, then brag when he would come back with a $50 hit. Nobody ever came out ahead. Nobody.

Asking people if they have gas never gets old. Before you had to prepay at the pump, I had to ask everyone who came in if they had also purchased gasoline. If I didn't – and I cannot tell you how often this would happen – they would drive off without paying for it. I experimented with more delicate ways of asking, but I decided to stick with "Do you have gas?" just because it was more fun.

They don't want to see you on holidays. I had to work every Christmas, Thanksgiving and Easter. People would come in and say, "Aw, they shouldn't make you work." But if there were no customers spending money on holidays, the doors would probably stay closed. 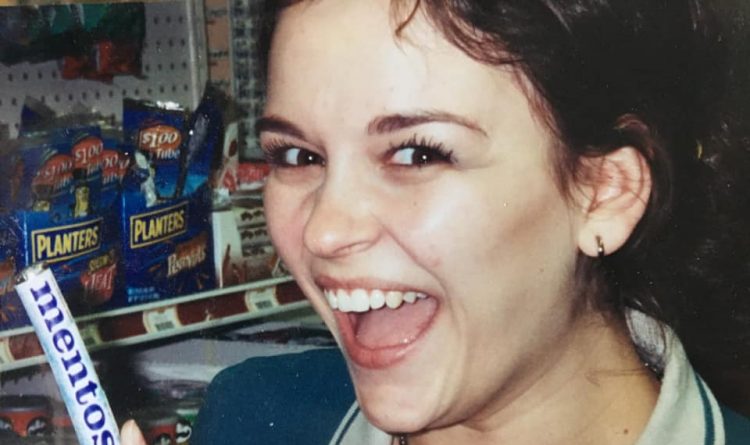 The Discount Diva, acting out a Mentos commercial on the job at Noco Express, formerly located at 139 Main St. in North Tonawanda.

They don't want to go on a date with you. I mean, I'm sure some clerk somewhere has a crush on one of their customers, but it's probably not you. So can you please just let them work in peace?

All day long while I was trying to work, people would put me in the profoundly uncomfortable position of asking for my phone number. I was stuck behind the counter with no escape while they stood there waiting for me to give them my digits (sorry, it was the '90s).

Just because they're smiling and being friendly, it does not mean they are in love with you. It means they're doing their job. Keep it moving.