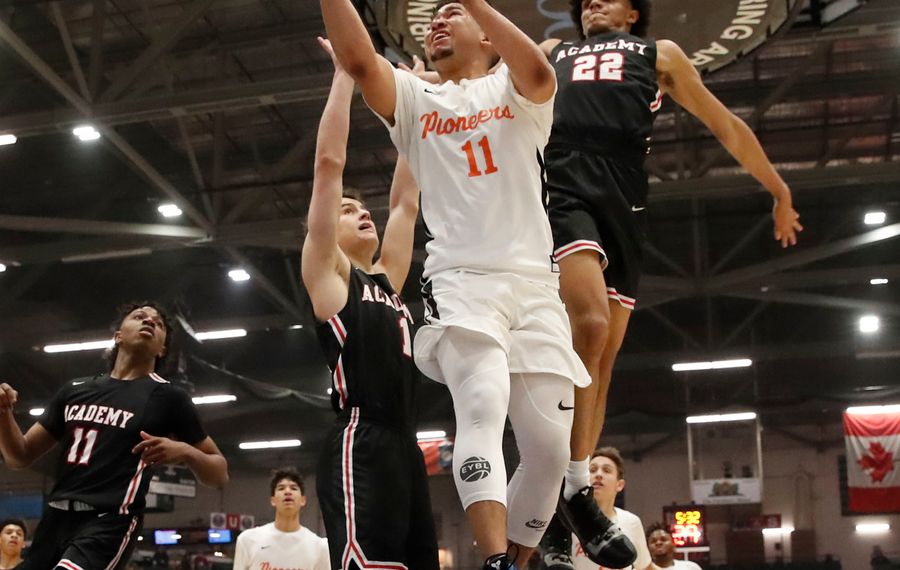 Hemphill was the Hawks' unquestioned leader. With an ability to dominate in the paint, the four-year starter recorded 13 double-doubles and one triple-double this season, helping the Hawks reach the state Federation final. Hemphill also averaged 3.2 steals. The first-team All-Catholic selection became O’Hara’s all-time leader in points (1,676) and rebounds (1,138) during a campaign in which the Hawks set a program record for wins in a season (26), captured their first Manhattan Cup Class B championship and their first state Catholic title since 1994. He scored a career-high 43 points in a win against Timon and finished with 26 points and 18 rebounds in the Federation final.

The Niagara Frontier League Player of the Year led Lew-Port to its first league title since 1984 and its first Section VI title since 1978. It is not often a freshman is named All-WNY first team, and this year he is one of two. The Lancers’ offense ran through Gayle, who can score from the outside or inside and is content setting up teammates for baskets when multi-teamed by the defense. Gayle is one of the best defenders in the area. He said he considers beating Niagara Falls, where he played at as an eighth-grader, in the NFL title game as his most memorable game from the season. He has Division I offers.

Another freshman to make the All-WNY first-team, the second-year starter delivered dominant performances, especially during the postseason. In one of the most memorable performances by a player in Section VI playoff history, Lightfoot scored 20 consecutive points, including the game-tying 3-pointer at the buzzer during a 39-point effort in helping Falls overcome an 11-point, fourth-quarter deficit to earn an overtime win against Williamsville North in the Class AA final. He dropped a game-high 32 points on McQuaid during Falls’ triumph in the Far West Regionals. Lightfoot scored 20 or more points six times, 30 or more three times and had 19 points and 12 assists in a regular-season win against Aquinas. He has Division I offers.

The four-year starter is a repeat first-team All-Western New York selection. Hutchins battled through a nagging lower-body injury to increase his scoring average by 7.5 points per game. Park’s on-court leader, Hutchins played his best when his team needed it most during a 25-3 campaign that included a second consecutive Class A state Catholic championship and a run to the Federation semifinal. The Monsignor Martin High Schools Athletic Association Player of the Year also earned Manhattan Cup playoff MVP honors. He poured in a career-high 37 points versus Long Beach Poly at a tournament in Arkansas during Christmas break and scored 31 points in the state Catholic semifinal win against Holy Trinity. One of the top defenders in the area with great court vision, he ended his career with 1,309 points.

The remaining giant from the triple towers of players 6-foot-8 or taller that gave Park an advantage during its run to the 2018 Federation title, Nnagbo showed he was capable of doing the job himself and that he could be a reliable No. 2 scoring option. The athletic big man, who developed some nice post moves during the offseason, more than doubled his 6.8 points per game scoring average from last year and increased his rebounding average by 3.1. More importantly, Nnagbo’s presence as a rim protector caused fits for Park’s opponents. He said he is most proud that he’s part of two state Catholic championship teams and a Federation champion.

The Monsignor Martin Class B Player of the Year and Manhattan Cup MVP led the Hawks in points per game. He scored a career-high 41 points in a win over Kenmore East and he scored at least 20 or more points in a game eight times. He helped fuel O’Hara’s comeback win in the state Catholic final against Regis with an 18-point performance. He finished fifth on O'Hara's list of career scoring with 1,190 points.

Closing of Niagara Catholic turned into Niagara Falls’ gain as last season’s Manhattan Cup Class B MVP helped the Wolverines reach the state Class AA Final Four. A gifted athlete who can attack the basket as well as spot up for the 3-pointer, Bradberry led Niagara Falls in points per game. He set a school record by making 11 3-pointers during a 40-point effort versus Kenmore East. He has 1,326 career points.

One of the last links to Olean’s state championship team in 2016 leaves the program as its all-time leader in assists (639). The offensive and defensive leader of the Huskies and a speedy and shifty playmaker, Schmidt was a threat to go coast-to-coast or penetrate and kick it to open teammates. He recorded eight double-doubles this season and finished his career with 1,107 points.

Baugh made the transition from secondary scoring option to leading scorer for Section VI Class A-1 champions. He scored 38 points in a win against Lancaster, one of his five 30-point-plus games. He made timely shot after timely shot during Championship Week wins against Sweet Home and Williamsville East and capped career with 1,172 points. He might head to prep school before deciding on college.

Vass became a reliable scoring option for the Crusaders in his second season. A first-team All-Catholic selection who is solid ball handler and finisher around the basket, he increased his points per game average by 10 and rebounds per by 5. He made the free throw that forced a second overtime during Canisius’ three-overtime win against St. Francis in the Manhattan Cup semifinal. He scored 22 points in a 63-60 win at rival St. Joe’s.

Senior capped his career by draining a 3-pointer on his final shot to give him 1,000 career points. The first-team Niagara Frontier League star scored more than 20 points in a game eight times, including a 31-point effort in a win against Kenmore East. He scored the game-winning basket just before final horn in a Class A-2 quarterfinal game against two-time Class B state semifinalist Health Sciences.

Also a first-team All-Western New York receiver who will play football at Monmouth, Brooks is most proud of helping the Lions reach the Buffalo State portion of playoffs for the first time in four yeAAAAAAAAAAAAAAAAAAars. He scored 23 points in a quarterfinal win at Clarence and followed that with 27 in a semifinal loss to Williamsville North. Also a track standout who has placed at the state meet, Brooks finished his basketball career with 1,046 points.

Goodridge can shoot the 3-pointer and drive to the basket, with the leaping ability to finish a fast break with a slam dunk. He graduates as Springville’s all-time leader in career points (1,478), most points in a game (44) and points in a season (555).

A scholar-athlete in three sports, Belote has the ability to drive to basket or shoot from perimeter, making him a match-up nightmare. He earned MVP honors at the Cataract City Classic, Jolly Boys and Five Guys tournaments. He scored a career-high 33 points in a Section VI Class AA semifinal win against Lockport. He also plays golf and baseball.

The Yale Cup Player of the Year helped the Kats reach the state Class C final. He finished with 23 points and seven assists in a state semifinal win that ended defending champion Lake George’s 54-game winning streak. Jones finished with 29 points in a game three times and went for at least 20 nine times. He considers the comeback win from 19-point third-quarter deficit over C.G. Finney in Far West Regionals as his top moment of the season.

The three-sport athlete served as the inside force for a Huskies team that lost just once. Droney was the MVP of the IAABO and Centercourt Classic tournaments. He registered 20 points and 12 rebounds, one of his 10 double-doubles on the season, during a win against Greece Odyssey in Far West Regionals. He recorded 19 points and 11 rebounds in Class B-1 final win against City Honors.

He led Monsignor Martin High School Athletic Association in double-doubles with 14 and notched a triple-double in an overtime loss at Park. He perhaps played his best game in the Red Raiders’ triple-overtime loss to Canisius in the Manhattan Cup semifinal, when he made either the game-extending or go-ahead basket three times in the closing seconds of regulation and the first two overtime periods during a 22-point performance.

The Charter Schools League Player of the Year led the Thunder Hawks to their second consecutive sectional final. He scored at least 20 points 16 times and went for 30-plus four times. He scored a career-high 36 points twice, once coming in a February home win against Maple Grove. He followed that by scoring 31 in a win against Timon-St. Jude to surpass 1,000 career points. He ended his career with 1,088 points.

Shifflet led Section VI in blocked shots with 84 and was a dominating inside presence for the Class A-1 runner-up Flames. He posted a double-double in 22 of team’s 24 games. He poured in 29 points to go with 12 rebounds in a sectional semifinal win against Niagara Wheatfield. Shiffley said the quarterfinal win at McKinley to reach Buffalo State was his most memorable game of the season.