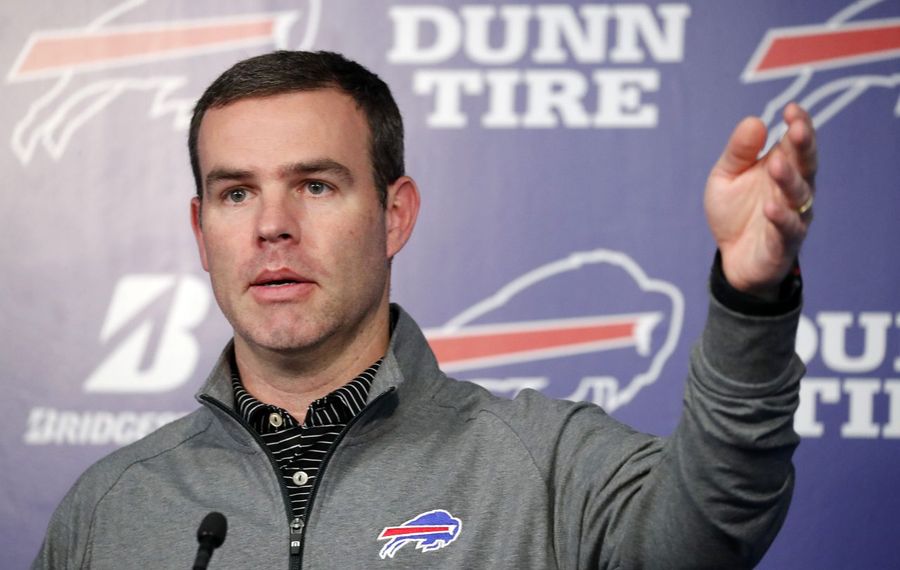 Brandon Beane did his best to be as convincing as possible.

The Buffalo Bills’ general manager wanted anyone who listened to his news conference to believe that his team is going to select the “best player available” when its turn comes up ninth overall in the first round of the NFL draft on Thursday in Nashville.

“Guys, I’m serious. We’re taking the best player,” Beane said in his most persuasive tone. “We’ve got the board stacked and we can draft right now and there’s some good players. I feel confident that we’ll get a good player at nine.”

“I’ve been at No. 9 before and there’s a lot of good football players,” added coach Sean McDermott, a reference to when the former Carolina defensive coordinator saw the Panthers select middle linebacker Luke Kuechly with the ninth pick in 2012. “I know Brandon and his staff have put in a lot of work. This is, as you know, a culmination of it. A culmination of a lot of work all in one weekend. It’ll be the next step for us as a team and I’m excited for it.”

The phrase “best player available” is one that every GM around the NFL uses. Take these examples, starting with Chiefs General Manager Brett Veach at the NFL scouting combine.

"I think our plan is always to draft the best player available."

Or this from Buccaneers GM Jason Licht when asked about the defensive line depth in this year's draft lining up well with his team's needs: "It lines up great, but so do a couple of other positions, too. ... If we stay at 5, it gives us the flexibility to take the best player. That wouldn't exclude an offensive lineman or an offensive player, either."

Or finally, this from Giants GM Dave Gettleman at his recent pre-draft press conference.

"I'm just telling you: I'm not going to force a pick. You can't draft for need. You'll get screwed every time. You'll make a mistake."

Often times, "best player available" is just lip service. The reality is, teams draft for need all the time. Is it any coincidence, for example, that Buffalo’s two first-round draft picks last year – Josh Allen and Tremaine Edmunds – play quarterback and middle linebacker, respectively? Of course not. Those were Buffalo’s two biggest needs entering the draft.

This year, however, it’s a lot easier to believe Beane when he talks about taking the “best player available.” That’s because of the work he put in during free agency. By signing a whopping 17 free agents, Beane plugged many of the holes on his roster.

“I do think I can sit here and say that I don’t feel we have a glaring hole,” Beane said. “I’m never going to say that we (don’t) have positions that are stronger than others. ... We still do have ‘needs,’ but we’re not going into the draft with a glaring hole. That was the focus and will be the focus area in free agency. At the minimum, we’ve at least accomplished that.”

In doing so, Beane has opened a world of possibilities.

“I like that,” he said. “I don’t want to be sitting here with a major hole. If you have a major hole at a spot that’s just glaring, that ‘Joe Fan’ or ‘Joe Media Writer’ knows you need – that if you don’t get it in the first round, especially at a position that would be considered thin, I think it would be harder to play poker, so to speak, to what your plans are.

“I know there’s a lot of stuff out there. Everybody has a mock. People can be just making stuff up or it can differ depending on their intel.”

Just how wide open is it for the Bills in the first round? The website sbnation.com keeps a database of 97 mock drafts. Six prospects have received at least 8 percent of the votes for the Bills’ first-round pick in those drafts, which goes to show the range of opinions among the so-called experts.

Any of those players would fill one of the needs on the roster Beane referred to, but it’s difficult to single out any position as being more critical than another.

At tight end, the Bills added Tyler Kroft this offseason. At defensive tackle, they re-signed Jordan Phillips. Each has started at least 26 games in the NFL. If the Bills were to add Hockenson or Oliver, for example, that player would likely take over as the starter, but that would be upgrading a position rather than reaching for a player because of need.

The true spirit of “best player available” would mean completely ignoring position and taking the highest-graded player. Consider this hypothetical: The Bills have Oklahoma quarterback Kyler Murray at No. 1 on their draft board. They think he’s going to be a star. If he somehow made it to No. 9, “best player available” means the Bills would take him.

In reality, that’s not going to happen. The Bills invested the seventh overall pick in Allen last season. He’s not going anywhere. The workaround for that is simply removing quarterbacks from the draft board.

When work begins to stack the draft board in December, nearly 400 players are under consideration. That includes underclassmen who may choose to enter the draft.

“It’s not like you can wait until they declare and you can go watch them live,” Beane said. “I would rather err on getting one live look on an underclassman in case they do declare and there were some guys who we felt shouldn’t have declared and did, like every year, for whatever reason. You have that, and then you pare it down in February once the guys have declared, and we start to eliminate guys (before the scouting combine) for various reasons.”

By the time the first round rolls around, Beane said the Bills’ draft board will contain between 115 and 140 players.

“It depends on how nice the doctors are to us,” Beane said, meaning some players might be removed from the draft board because of medical concerns. “I’ve got a good feel for any of the guys who we would have concerns with. The medical rechecks were just last week and I just saw the doc in the cafeteria a little while ago.

Could Montez Sweat fall to Bills at No. 9? Health issue causes speculation

In no particular order, the Bills’ needs heading into the draft look like this: Edge rusher, defensive tackle, tight end, wide receiver, offensive tackle and running back (to a lesser degree).

Both the defensive line and tight end positions are considered to be strengths of this year’s class, which can be looked at a couple different ways through a Bills lens. A case could be made to wait on a tight end, for example, because Beane might feel like he can get a player who can contribute at the position in later rounds.

As for the depth along the defensive line, Beane downplayed the idea of it being "historically good," as NFL Network analyst Daniel Jeremiah has described the group.

“I think it’s solid. I don’t know if I want to label it as off-the-charts great,” he said. “I’d have to really go back and look. At the end of the day, there’s projections and how players are going to be used. Sometimes there’s D-linemen that some teams run in a 3-4 have rated much higher than we have rated running a 4-3 and vice versa. There’s guys out there that we don’t feel as highly about because we run a 4-3 that I could see that if Sean was running a 3-4, we probably would feel that they would be a better fit.”

Is that a smokescreen? Does Beane actually love the defensive line talent in this draft?

He’s of course not saying right now, choosing instead to go with the “best player available” approach.

“I know you don’t believe me,” he joked, “but I’m going to prove you guys wrong.”