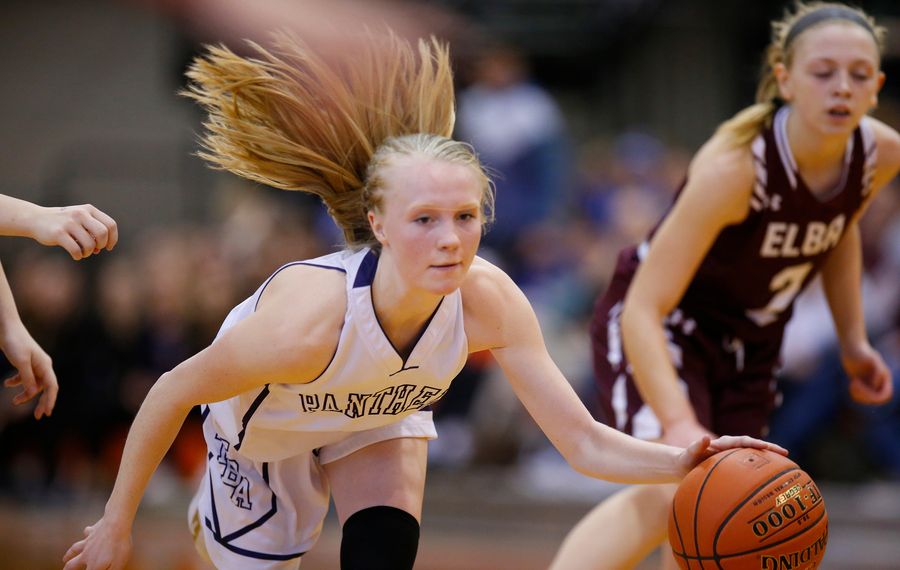 A repeat first-team All-Western New York selection, last year’s Class D state player of the year increased her production across the board even though opponents tried to stop her in guiding the Panthers to a state title one year after they lost in the final in overtime. Haskell improved her points per game average by nearly 2.0. She finished with 721 points, which was 94 more points than her area-leading total from last year. Haskell scored 30 or more points 10 times and scored 40 or more twice. The Canisius College commit notched two triple-doubles in which she had 10 steals in each effort. She followed up a 33-point effort in a state semifinal win by notching 40 points with 11 rebounds in the state final. She averaged 35.3 points per game during the state tournament.

The 2018 Sister Maria Pares Buffalo News Player of the Year may be the best point guard in the area as she makes those around her better. She graduates ranked second all-time in assists at O’Hara. Parker battled through a series of nagging injuries and a stomach ailment to guide the Hawks to their sixth straight Monsignor Martin High School Athletic Association playoff title. The Siena commit, who played at Cheektowaga as an eighth-grader before switching to O’Hara, played perhaps her best in the Hawks’ two wins over St. Mary’s. She scored 17 points in a late-season triumph at St. Mary’s. Later, her ability to drive to the basket and dish to open teammates gave St. Mary’s fits in the Monsignor Martin final. Aside from the Monsignor Martin final, Parker’s favorite memory of the season was watching the development of her younger sister, Aaliyah.

After playing high school ball in Arizona for Seton Catholic last year, the 2017 All-Western New York first-team selection and points-producer Pfeiffer returned to the area with a flourish. After winning just seven games in 2017-18,  with Pfeiffer seemingly scoring at will, Olean (20-3) reached the Section VI Class B-1 final. She scored 31 points in her first game back with the Huskies then had a single-game school-record 63 points during a senior night win over Maple Grove, a game in which she drained 13 3-pointers. Pfeiffer scored at least 41 or more points six times. The program’s all-time scoring leader (2,269 points) eclipsed the 50-point mark twice, including in a playoff win over Dunkirk. Pfeiffer’s most proud of her 63-point game and scoring her 2,000th career point.

Only a freshman, Ciezki set the school single-season records for assists (138) and steals (128), helping the Lancers reach the Monsignor Martin Class AA final. In addition to creating opportunities for others, she compiled 529 points, second-most in a season in program history. With Ciezki serving as floor general, St. Mary’s averaged 73 points per game. She also led Lancers in deflections as they loved to score in transition. Her favorite memories from the season include earning the starting job and being part of a regular-season win at O’Hara. She scored 31 points twice and scored 20 or more points in 14 games. She was the MVP at the Bishop Ludden and Franklinville tournaments, and is receiving interest from Division I programs.

The four-year varsity starter is a repeat first-team All-Western New York selection. She helped the Billies capture their sixth straight Section VI Class A-1 crown. A five-star prospect who ranks second among ESPN’s 2021 college recruits, DeBerry is an all-around presence. She increased her per-game averages in assists (from 1.3 to 4.0) and steals (2.5 to 4.0). She also can shoot the 3-pointer. But her inside game causes teams the most problems. She has eclipsed 1,000 career points. DeBerry is being courted by UConn, Notre Dame, Tennessee, Louisville and South Carolina. She plans to try out for the U.S. Under-16 national team in May.

The second-year starter and ECIC Player of the Year is physical and aggressive yet has a nice shooting touch. She helped the Tigers reach the Section VI Class A-2 final. She scored 20 points in a 68-63 December win over Cardinal O’Hara, which broke O’Hara’s 89-game winning streak against Western New York competition. She has offers from Manhattan College and Niagara. Older sister Claire, a sophomore at Niagara, earned first-team honors two years ago.

Kruszka makes the leap to second team after earning honorable mention the previous two seasons. Kruszka set the school record for points in a season (464) in helping Frontier secure the Section VI Class AA crown that eluded the team in 2017 and 2018. The ECIC I MVP, Kruszka scored 28 points in a Feb. 12 win over Lancaster to surpass 1,000 career points. She has 1,105 points.

A three-sport athlete in her fourth season, Cornfield’s quickness mixed with her anticipation skills made facing Lake Shore’s defense a miserable experience. She poured in 27 points during Lake Shore’s 68-66 double overtime loss to eventual state champion Pittsford Mendon in the regionals. She has eclipsed 1,000 career points. The playmaker set program records for assists in a game (10) and season (136).

Another multi-sport athlete, Noelani’s twin played some of her best basketball with Section VI titles on the line. She poured in a game-high 26 points and made the clinching free throws during a Class A-2 final win over Amherst. In the overall Class A final, she drove the lane fearlessly against Williamsville South and finished with 25 points. Cornfield holds the school record for career points (1,432).

Ryan set the school record for points in a season with 601. She scored 13 points to help the Sharks win the Monsignor Martin Class A postseason title, earning tournament MVP honors. She became the ninth Sharks player to score 1,000 career points when she poured in 26 during a win over Nardin in February. The three-year starter has 1,259 points in her high school career.

Parker raised her game to another level in her second season as a starter. The Monsignor Martin Class AA championship game MVP scored a team-high 15 points in a victory over St. Mary’s. She considers winning the playoff championship as her top moment of the season. She currently is playing in a tournament in Barcelona with older sister, Angel.

The Cortland State-bound Tully was an inside force during the postseason for the Blue Devils. She scored 19 points in a win over Olean in the Class B-1 section final. She then scored a game-high 24 in a Class B final victory over Southwestern. The ECIC III Player of the Year, Tully grabbed 681 rebounds and blocked 125 shots during her high school career.

Snyder’s non-stop motor forced opponents into countless turnovers. She was at her pest best during the A-2 final, forcing takeaways that fueled Lake Shore’s rally from a 13-point third-quarter deficit. One her favorite memories was scoring on an inbounds play in the closing seconds of regulation against Iroquois. The Eagles won in overtime as Snyder finished with 25 points. She helped Haudenosaunee win gold in the 2017 Native American Indigenous Games.

One of the best players in the history of the Thunder, Garlow not only had a knack for scoring but made those around her better. She helped Mount St. Mary win a total of 40 games over the past two seasons. She scored 36 points in close loss to O’Hara and 31 in a nail-biter to St. Mary’s. She holds school records for career points (1,088) and assists (280) and is one of the top lacrosse players in the area.

A four-year starter and three-sport standout, Angeletti is a member of the 1,000 points and 1,000 rebounds clubs. She has 1,380 points and 1,034 rebounds for her career at Panama. Angeletti helped the Panthers reach the Section VI Class D final, which they lost by a point to eventual state champion Franklinville. She made the all-tournament team at St. Bonaventure. Angeletti, an all-state volleyball selection, helped Panama win the state title in that sport in 2016. Her Panama basketball teams were state runners-up in 2016 and 2017.

The Buffalo Public Schools’ Canisius Cup Player of the Year has received two Division I offers and is the Lady Centaurs’ all-time leading scorer -- as a sophomore.  Wood has had games of 45 points and 43 points on her resume. The 43-point game against McKinley was her most memorable game of the season because she reached 1,000 career points in that contest.

The three-sport athlete is a five-year starter for the Falcons. She left her mark on the program and not just because she helped it win sectionals for the first time. The Niagara County Community College commit set program marks for steals in a game (12) and season (85), rebounds in a game (14) and career points (1,267). She’s most proud of breaking 1,000 career points mark and winning the Section VI title.

The three-year starter and three-sport athlete earned Niagara Frontier League Player of the Year honors. Her happiest moment of the season came when the Vikings defeated Hamburg in the sectional semifinals. Hamburg had blocked their path to the A-1 final the previous three years. Sweeney scored 21 points in the victory then had a 27-point effort in a championship-game loss to Williamsville South.

Part of a returning backcourt next season for St. Mary’s (21-3), Kline earned first-team All-Catholic honors after leading the Monsignor Martin in 3-pointers (70). Kline set the school record for 3-pointers in a game with nine in a win over Lake Shore. She drained seven in a win over Bishop Ludden of Syracuse. Kline was named to all-tournament teams at Ludden and Franklinville.

The all-time leading scorer in Trojans history with 1,131 points, Radack helped her team return to Buffalo State, where it defeated Olmsted to win the Section VI B-2 title. She holds the school record for points in a game with 38. Radack is most proud of helping her team win back-to-back sectional championships with rosters of eight players. Radack also plays softball and soccer.