It was the first place I landed in Buffalo, in 1989, on a day-trip from SUNY Fredonia, where I was wrapping up my BA. In many ways, it has maintained its gravitational pull on me since.

The Elmwood Strip – now known by a slightly more bougie moniker, the Elmwood Village, indicative of its upgrade from cheap-college-and-bohemian-artist lodgings to urban mecca, with most homes selling for more than a quarter-million dollars – has long been the main artery between Buffalo’s head and its heart, its gritty realities and its lofty hopes.

It starts, for all intents and purposes, at the Albright-Knox Art Gallery/Buffalo State College/Burchfield Penney/Hotel Henry nexus, and runs south, all the way to Niagara Square and City Hall, bisecting Allentown along the way, and providing a view of the city that might make dubious out-of-towners reconsider their anti-Buffalo bias.

In my estimation, Elmwood reflects the Buffalo we strive to be – at least, those of us for whom the city is central to regional self-image, and the arts are at the heart of it all. When I first came here, it was Elmwood that convinced me to stay, and led me to believe I’d found a mecca of music, booze, food and architecture, all amid a delightfully frank freakiness displayed by its denizens.

At the time, I knew nothing of the Bills, Sabres or the long-lingering Main Street economic divide. I thought I’d found a little slice of "boho" heaven.

I had, but the 30 years that have passed since eroded such grandiose visions, ultimately replacing them with a view blending world-weariness and indomitable hopefulness.

Considering this, the recent revelation of plans for the Albright-Knox’s two-year expansion project, replete with the all-glass, courtyard-encompassing, Olafur Eliasson-designed “Common Sky” sculpture, feels metaphorically apt – Eliasson’s work will allow the weather to enter the room, while simultaneously keeping that weather at bay. In a sense, all of us who live here have been doing this all along. 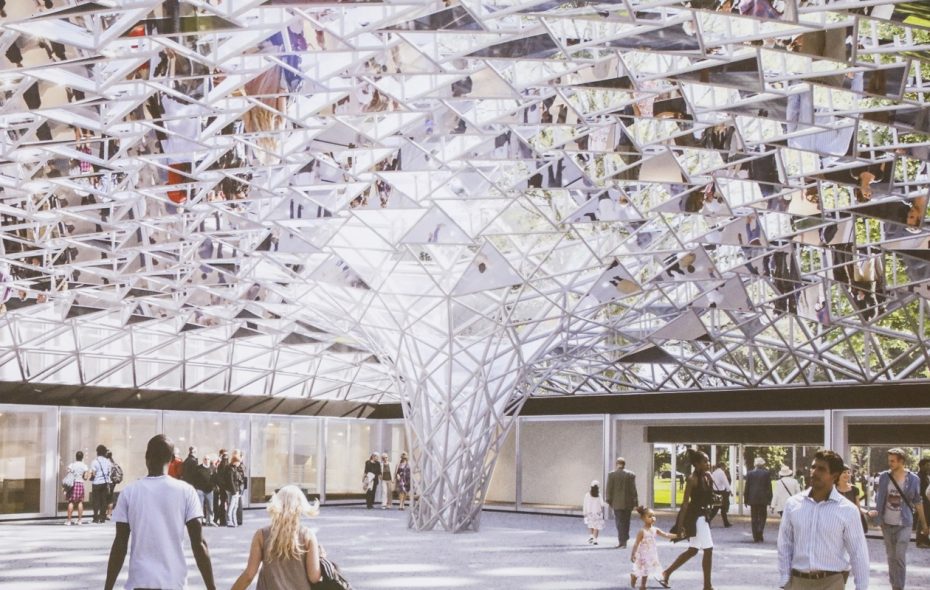 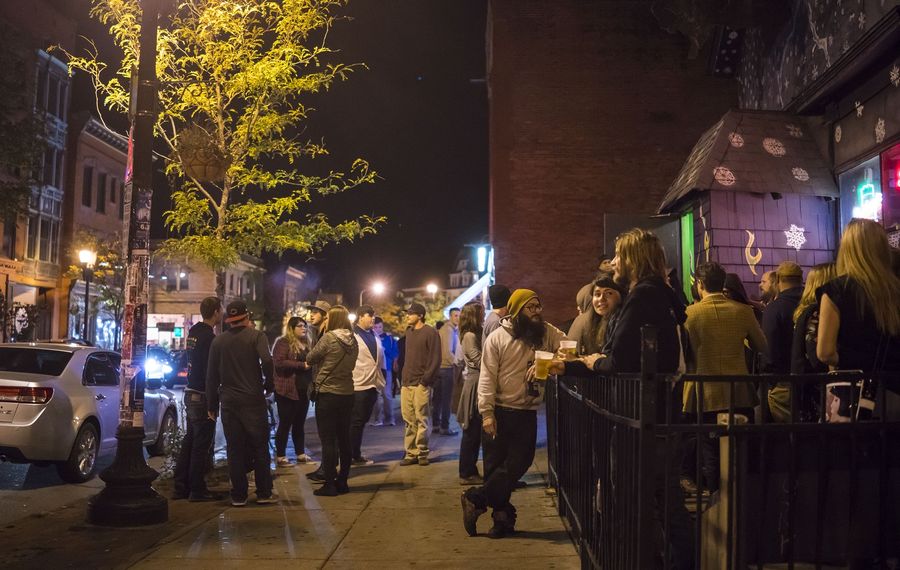 On a recent cold and windy afternoon, I continued that tradition, conjuring and carrying with me an imagined climate, and making the most of a brief window of time beneath our "Common Sky" in the Elmwood Village.

On the day I hit the Strip with phone-camera and notebook in hand, it happened to be Record Store Day, the annual celebration of the independent music store and the concurrent rebirth of vinyl as a favored medium for tenured music-heads and devoted newcomers alike.

I thought a local craft beer at Thin Man Brewery (492 Elmwood Ave.) might get me in the mood to willingly drop absurd amounts of money on Record Store Day vinyl at the nearby Revolver Records, and, as it turns out, I was correct in this assumption.

I grabbed a Bushel Blonde, the fall-like weather whetting my appetite for a dense, soul-warming Belgian wheat-style pint, and three sips of the 5.9 percent ABV nectar kicked me straight into nostalgia mode. 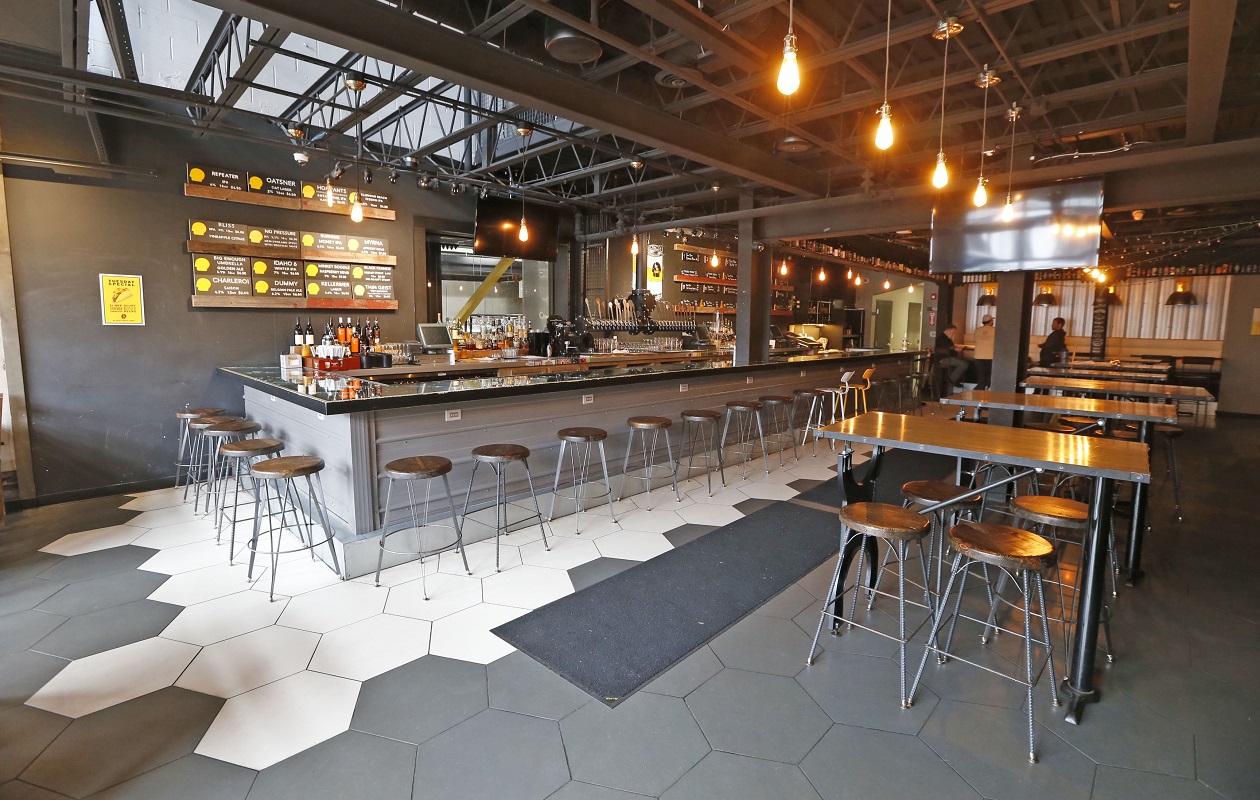 Thin Man sits in the space that once housed Faherty’s, a favorite summer haunt of mine in the '90s, its garage door opening onto a patio that offered a great vantage point for people-watching on the strip.

I remember hanging with my (not yet) wife there, right after we’d started dating, and feeling a renewed sense of the optimism that had largely abandoned me around that time, due to my inability to make solid living as an independent musician in Buffalo. (Nope, those record company scouts we thought were going to descend on our city in the wake of the Seattle feeding frenzy never did show up.)

The Thin Man folks also purchased Toro Tapas Bar next door to Faherty’s, and they’ve transformed that part of the block into an incredibly impressive brewery, restaurant and gathering spot bolstered by a strong commitment to live local music.

Err, why yes, bartender, I would like another Bushel Blonde, now that you mention it. … 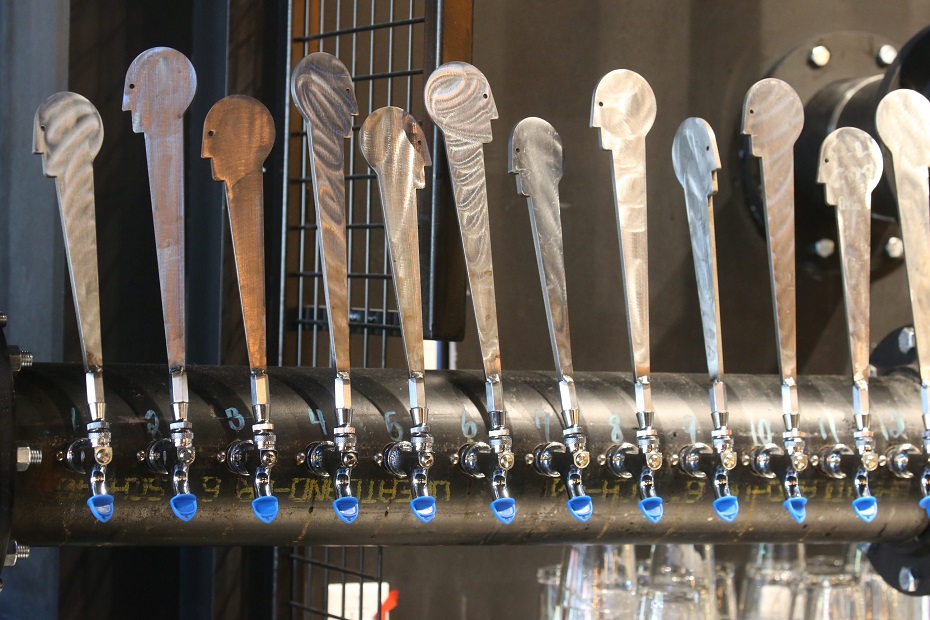 Temporarily satiated, I hit the bricks for the couple-of-blocks jaunt down to Revolver Records (831 Elmwood Ave.), the second storefront owner Phil Machemer and his crew have opened beneath that moniker, following the success of the Hertel Avenue flagship store. I had a vinyl copy of the Flaming Lips’ RSD-exclusive new release “The King’s Mouth” on my mildly Bushel Blonde-dazed mind, but alas, I was too late; Machemer told me business had been brisk at both stores all day long, and the Lips’ new one had flown out the doors shortly after they opened.

I settled for a J. Dilla compilation, an RSD Frank Zappa compendium, a double-live set from Hawkwind, and a newly remastered, colored vinyl edition of Deep Purple’s molten classic “Fireball.” Not a bad haul.

Record shopping always makes me hungry – I'll let my psychoanalyst work that one out for me – and as the Bushel Blonde gradually broke off our beautiful relationship, hitting a gastropub jumped from the “want” to the “need’ column. 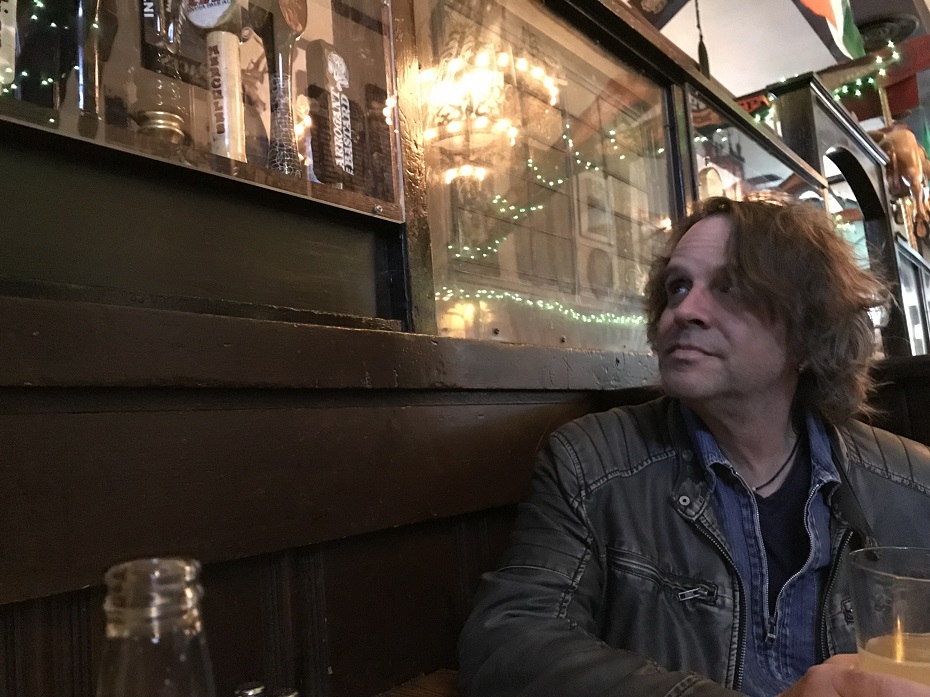 Jeff Miers at Coles: "So many taps, so little time." (Photo by Kim Miers)

Coles has been occupying its digs at 1104 Elmwood Ave. since 1934, so rather obviously, they’ve been doing something right. The restaurant-pub was a favored haunt of mine when I lived around the corner on Granger Place in the '90s, and I have many fond memories of heading over there during winter storms, when the entire city was shut down, but the taps were still running fine, thank you, at Coles.

All these many years later, the vibe at Coles remains the same – English pub-meets-college bar – but the beer list has greatly expanded.

I grabbed the “Guess Who Just Got Back Today?” dry-hopped Kolsch, and yes, I was drawn to it because I appreciated the nod to Thin Lizzy’s evergreen “The Boys Are Back in Town” in the beer’s name.

This frosty pint did exactly what I expect a Kolsch to do – tread the fine line between ale and lager, precisely because it’s fermented with ale yeasts at warmer temperatures, but finished at colder temperatures, like a lager.

Sufficiently relaxed, I decided to fully yield to my gluttonous instincts, and order – for the first time in the more than 25 years I’ve been coming here – the fabled “Huey, Louie, Andouille Burger,” an 8-ounce mixture of andouille sausage and ground beef, topped with Cajun spices, cheddar, caramelized onions, and Cajun remoulade. 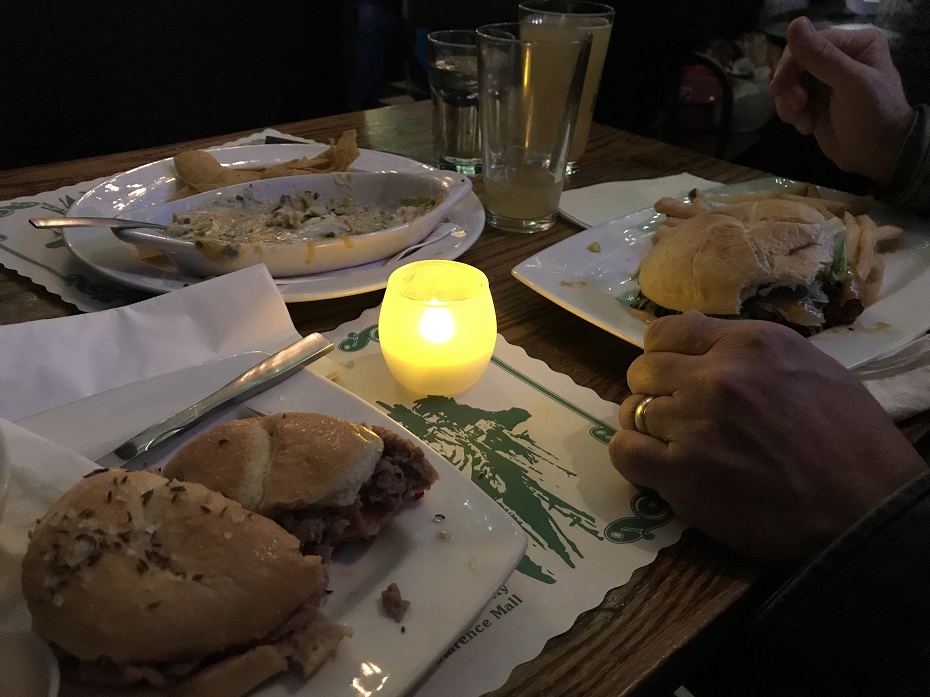 It was a delectably decadent experience that, in a wholly just world, would’ve been capped by a nice 45-minute nap. Alas, it was now early evening, and Mister Goodbar (1110 Elmwood Ave.) beckoned like a siren song toward a rocky coast.

Goodbar has been operating on Elmwood for almost exactly as long as I’ve been alive, and like me, it has weathered its fair share of changes, some good, some not so much. What remains, however, is a staple of the Strip, a twin-floor club that boasts a lengthy commitment to live local music, is a regular stop on student pub-crawls, and is also a place where everyone used to know my name, but now they think I’m probably a friend of their dad’s.

That’s all right. The night was still young when I bellied up to the bar for a Flying Bison Rusty Chain, and in my own imagined climate, beneath my own "Common Sky," so was I. 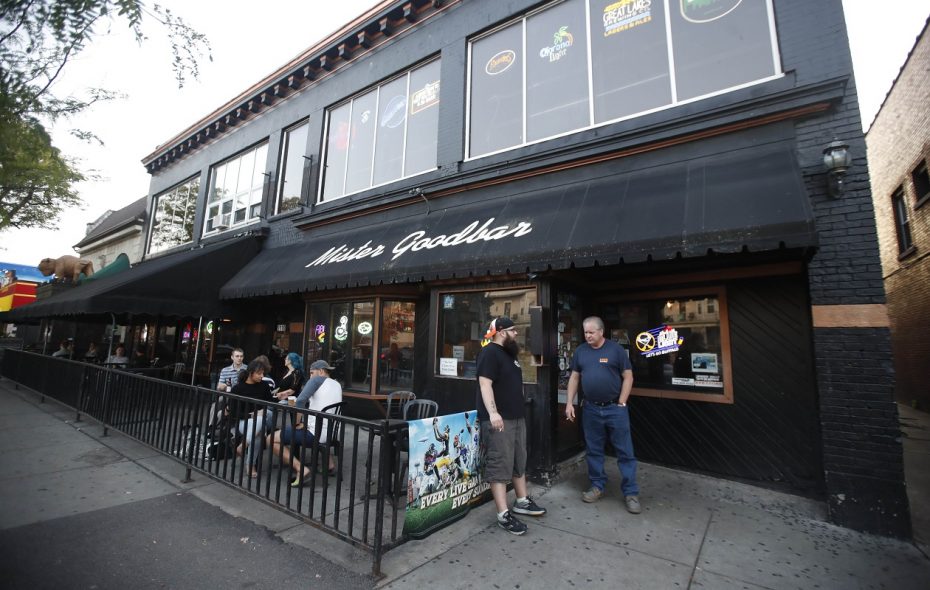