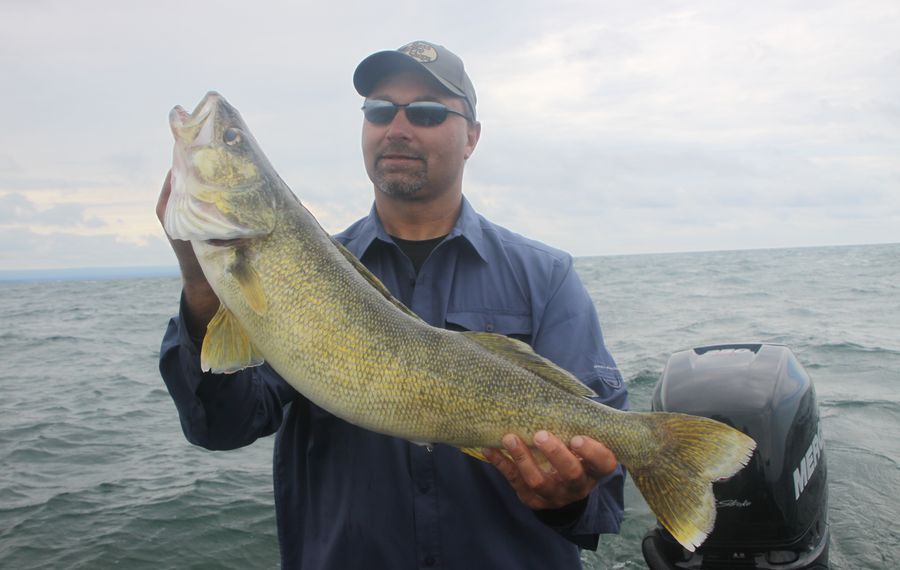 The Lake Erie fishing forecast for 2019 calls for more of the same as last year – plenty of fish and superb fishing. That was the message that was handed out at N.Y. Sea Grant’s State of Lake Erie meeting held last Thursday at the Southtowns Walleye Association’s clubhouse in Hamburg.

For Lake Erie, the number one preferred target is walleye. Last year’s catch rate broke a record, the second year in a row. In 2018, the walleye population was estimated at better than 41 million fish lake wide. The population now is estimated at 45 million fish age 2 and older. With the western basin of the lake coming off another outstanding hatch in 2018, it appears the walleye fishing will be good for many years to come.

“Walleye fishing quality in New York waters has been at record levels for the past two years with 2018 being the highest catch rate in the 31-year creel survey,” said Dr. Jason Robinson, the Department of Environmental Conservation’s Lake Erie Unit Leader (taking over for long-time leader Don Einhouse who retired in August of 2018). “The walleye catch rate in 2018 was 0.74 fish per angler hour.  To put that in perspective, the 31-year average catch rate is 0.2 per hour, so we are talking about a catch rate that is over 3.5 times higher than average.”

For the eastern basin of the lake, the waters off New York’s shoreline have had some excellent spawning success in 2010, 2012 and 2016. Recent netting surveys show that 2017 could be another biggie. Combine that with western basin explosions in 2015 and 2018, and you can see the possibilities for the future.

“This level of successive spawning success in the east and the west has not been observed before,” Robinson said. “It’s an exciting time to be a walleye angler or biologist on Lake Erie. Walleye fishing is the best we’ve ever seen.”

Of course, there is some cause for concern relative to overall fish population levels. All those predator fish must eat something. Biologists are keeping a watchful eye on what’s happening in the ecosystem.

“Our emerald shiner index in our trawl survey last Fall was the fifth highest in our 27-year time series,” Robinson said. “However, New York was the only Lake Erie jurisdiction to catch any emeralds and lake wide emerald abundance remains low. Something else to pay attention to is the low adult abundance of rainbow smelt in central and eastern basins in 2018.  They were distinctly absent from trawl and hydroacoustic surveys, and the commercial catch in Province of Ontario waters was one of the lowest in recent times.”

Overall, 188,701 walleyes were caught last year. A total of 123,503 were harvested. The blame for unharvested fish could be because they were below the 15-inch minimum size. The catch in 2018 was the highest harvest since 1989. 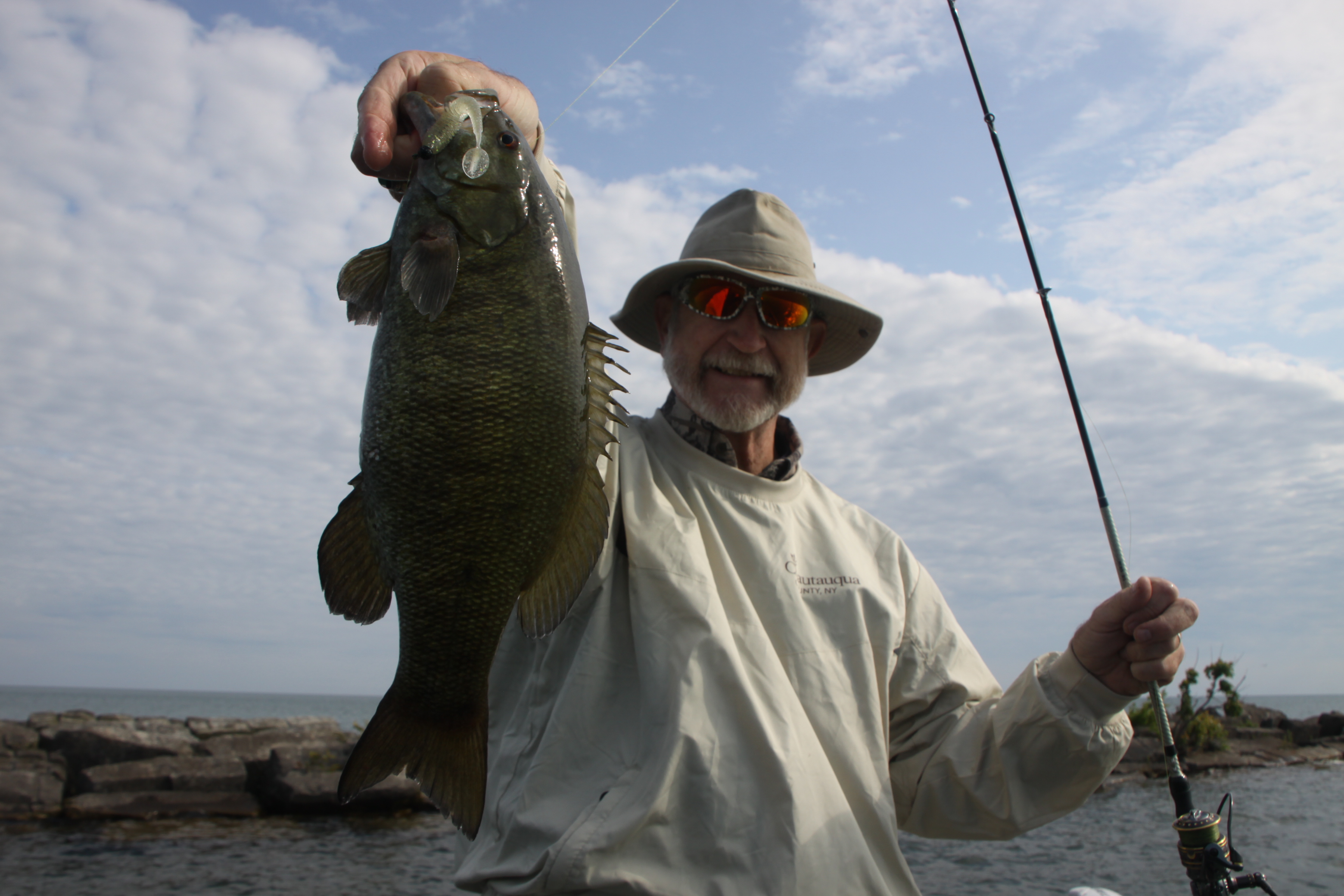 Dave Barus of East Aurora hoists of a big smallmouth bass out of Lake Erie last spring while fishing out of Dunkirk. (Courtesy photo)

There was some good news for bass fishermen in 2018, too. Bass fishing quality was the second highest measured in the 31 years of the survey. Spawning success has been stable in recent years and it appears that 2016 was an above-average year class of smallmouth bass. Combine that with an increase in catch-and-release fishing (harvest is now only 3 percent of the overall catch), high growth rates and increasing survival, DEC is seeing an increase in older bass the last four years.

“In 2016 and 2017, catch rates for bass were reduced but were still high relative to other bass fisheries,” Robinson said.  “In 2018, the bass catch rates in Lake Erie rebounded and were at or near the highest levels we have recorded.”

Perch fishing quality was starting to rebound in 2017 and 2018. Thanks to strong year classes in 2014-2016, we should continue to see improvements – if people fish for them.

“Angler effort for yellow perch was very low in 2018,” Robinson said.  “We have not observed effort this low since 2000.  This drastic decline in effort was likely a result of the record-breaking walleye fishing. Yellow perch angler catch rates were down relative to the record highs of 2013, 2014 and 2015.  However, the 2018 angler catch rate was slightly above average for the 31-year survey.”

“Our estimates of yellow perch abundance from our gillnet survey have been very high in the last two years.  We expect angler catch rates for yellow perch to increase in 2019 based on these increases in abundance.”

Lake Erie’s cold-water fishery is coming off a pretty good year. At the top of the list, steelhead and domestic rainbows combine to form a state stocking of more than 300,000 fish annually. Roughly 50,000 of those fish are domestic rainbows that replaced previous plants of brown trout. Browns are no longer stocked in the lake.

“Our 2017-18 tributary angler survey results indicated excellent fishing quality with average catch rates of 0.56 fish per hour,” said Jim Markham, DEC’s cold water aquatic biologist with the Lake Erie Unit.  “This was a significant improvement compared to the two previous surveys conducted in 2011-12 and 2014-15 (approximately 0.35 fish per hour).  The Lake Erie tributaries continue to consistently produce some of the highest quality steelhead fishing in the entire country.”

“We have also been working with the Salmon River Fish Hatchery to try and improve the size of our stocked steelhead,” Markham said.  “We discontinued the brown trout stocking program in 2017 mainly due to poor fishery performance for more than a decade. These fish were replaced with fall fingerling domestic rainbow trout, which will hopefully improve the early runs of rainbows/steelhead in our tributaries.”

Another important cold-water fish species is lake trout, federally managed to create self-sustaining populations. In 2018, fish managers made some changes by stocking 79,000 yearling fish off Dunkirk. Another 79,000 fish were planted off Ohio, 40,000 off Pennsylvania and 50,000 in the Province of Ontario waters. The total lake-wide amount was 247,000 lake trout, above the 200,000 fish target level. The target number has been exceeded in 10 of the last 12 years.

“We also have a lake trout acoustic telemetry project that is providing us with information on movements and spawning locations for mature fish,” chipped in Robinson.  “Within a few years, we hope to determine specific spawning locations and habitats, to use this information to determine why we haven’t had any success to date getting natural lake trout reproduction.”

“Also, of note was the stocking of 40,000 fall fingerling lake trout in Cattaraugus Creek in November 2018, the first year of a three-year pilot study to determine if we can get adults to return to the stream in the late fall and possibly use the stream for spawning," Markham said. "Several stream spawning populations of lake trout are known to have existed in the Great Lakes. I think the best news with lake trout is that we have had relatively high abundance of adult (age 5-plus) lake trout over the past four years, which is good for possibly getting some signal of natural reproduction.

“It is also good for anglers as there is many lake trout in excess of 12 pounds. Sea lamprey wounding remains above target levels in Lake Erie, but the adult sea lamprey index dropped below targets in 2018 for the first time since the early 1990s.”