The AxeWagon is on the move.

Buffalo's first truck dedicated to mobile hatchet-throwing, started by two employees at Hatchets & Hops, will debut at Pils, Pierogi and Polka on April 20 at Flying Bison Brewing Co. (840 Seneca St.), before starting a busy slate of summer festivals and events.

Andrew Lloyd, business operations manager for AxeWagon, and Alec Siskar, outside events coordinator for the truck, are at the helm of the mobile brand.

"We had lots of success in Buffalo," Lloyd said, referring to the flagship spot at 505 Main St., "but we've got limited capacity [there] and wanted to increase the opportunity for people by bringing axe throwing to them."

Debuting in September 2016, Hatchets & Hops welcomes groups to participate in the overhead-throwing challenge, aimed at a target with concentric circles indicating point values, in various formats, ranging from open throw to round-robin tournaments. With local craft beer and food on the premises, the first U.S.-based hatchet-throwing venue has been a hit - and has given reason to expand. 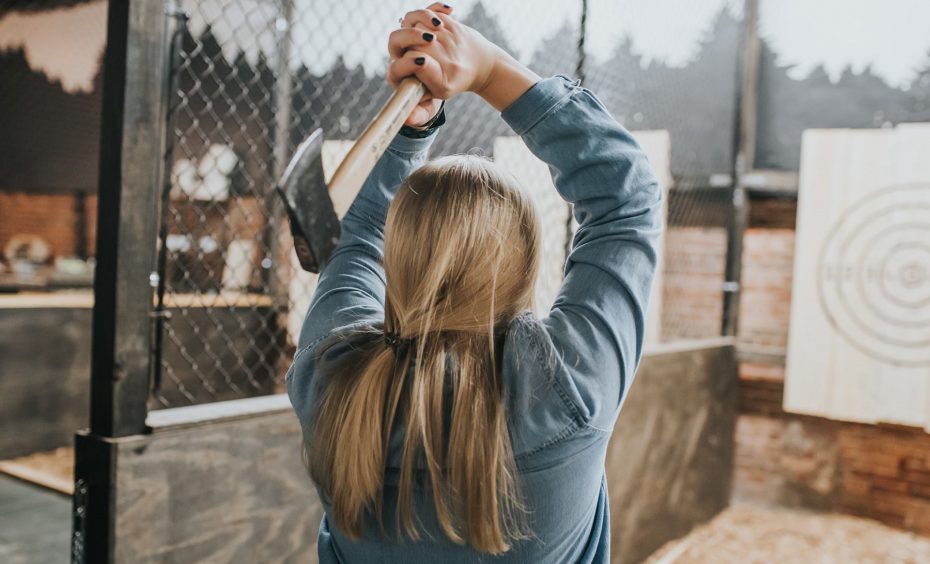 Hatchet-throwing has been popular at 505 Main St. since September 2016. (via Hatchets & Hops)

The black truck is equipped with the parts to assemble an enclosed bay at any site, even indoors. The mobile construct, which includes a sub floor and an overhead covering, is 12 feet wide, 17 feet deep and 10 feet tall, with the exterior made from custom-welded, expanded flattened steel, a step above the chain link enclosure on Main Street. The truck will carry plenty of hatchets and target boards to accommodate the demand. Assembly takes 30-45 minutes, the operators said.

Safety was emphasized by Siskar and Lloyd, as neither alcohol nor food (which would require additional licenses) will be served from the truck and two staff members will be on hand at all times, including an in-bay instructor to serve as a guide and ensure safe practices. Special closed-toe boots, purchased from Route 5 Boots & Shoes, may be rented on site, and a waiver must be signed before participating.

"We've been open for two-and-a-half years and we've had zero incidents," Lloyd said, referring to Hatchets & Hops, but a statistic he believes will continue with this new sister venture.

While the price for the truck rental varies by the distance from Hatchets & Hops, the number of workers required for the event and of those participating, the type of competition involved and more. For a frame of reference, Siskar said three to four hours would cost roughly $2,500, although that's more of a guideline than a set-in-stone rate. At the Flying Bison event, participants will be charged by the number of throws.

Lloyd and Siskar said the truck could be rented for weddings and private parties, too, with booking details at the Hatchets & Hops website. AxeWagon has a Facebook page, too. No changes are expected at the Main Street location of Hatchets & Hops, relative to the news of the truck's debut.