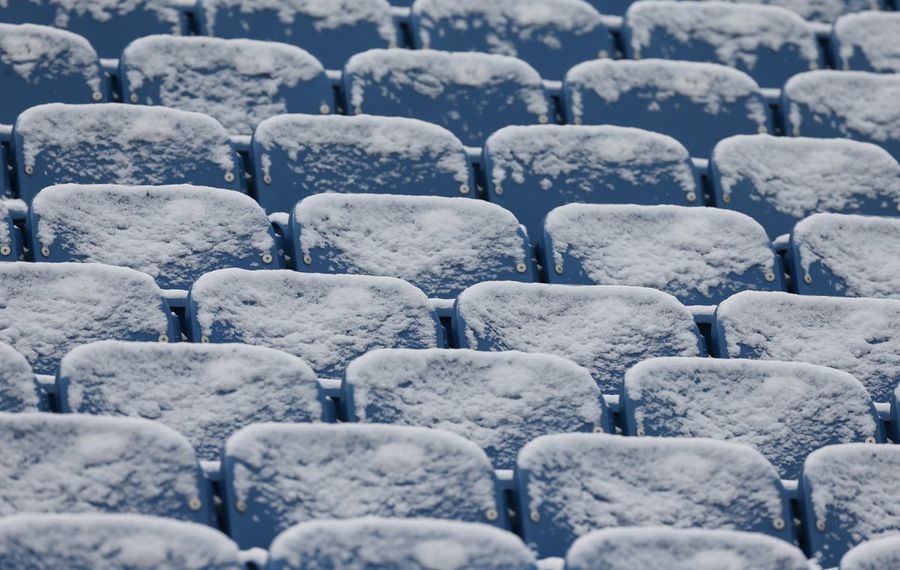 Buffalo Bills fans have come to consider it a form of cruel punishment by the NFL.

Come December, they're forced to sit in the cold and on snow-covered aluminum seats at New Era Field to watch their favorite team play multiple games.

In each of the last three seasons, it happened three times. But this year, the league is giving Bills fans a little bit of a break.

As revealed Wednesday night with the announcement of its 2019 regular-season schedule, the NFL has the Bills playing at home twice in the final month of the year: Dec. 8, against the Baltimore Ravens, and for the Dec. 29 regular-season finale against the New York Jets. Considering that December has five Sundays, that seems about right.

During another time, more December home games might have been viewed as a good thing, as an advantage during the stretch run. As Marv Levy used like to say, "When it's too tough for them, it's just right for us."

Of course, that was when the Bills routinely contended for the Super Bowl.

Since becoming mainly a postseason also-ran 19 years ago, the team's fan base sees it as an unwanted burden to sit through the typically frozen conditions found in Western New York that time of year with playoff hopes either all but gone or having already disappeared.

That was the case in 2018, when the Bills had three December games, including one against the dome-dwelling Detroit Lions and the other against the Miami Dolphins. Those contests, both of which the Bills won, were part of a three-game string to end the season was, for all intents and purposes, over when the Bills were officially eliminated from the postseason in a Week 14 loss against the Jets.

The league also didn't do the Bills any favors this season by having them play their first two games on the road, oddly enough in the same venue (MetLife Stadium), to face the Jets and Giants. Only three other teams – Kansas City, Indianapolis and San Francisco – open the season with back-to-back road games.

Then, again, the Bills' faithful can look forward to having five of the next six games at New Era Field. Maybe come this December, the attitude of the fan base will be different, now that there's at least some level of hope that a long-term answer at quarterback is in place with Josh Allen and many offensive needs were addressed in free agency.

Whether the NFL shares that sentiment is debatable.

It didn't give the Bills a single prime-time game. The closest it came to putting them in front of a mega audience was giving them a Thanksgiving game at Dallas.

Otherwise, 14 of the Bills' games that have been assigned days and times kick off at 1 p.m. The road encounter with New England will be either Saturday, Dec. 21, or Sunday, Dec. 22, and the time has yet to be determined.

And while the NFL did give the Bills only two home games in December, there are only three at New Era Field of the final eight games on the schedule.