A bitter battle between McGuire Development Co. and a former partner has ended with the company taking over the site of a long-stalled $200 million development of retail and housing on the edge of the Buffalo Niagara Medical Campus.

McGuire's takeover leaves the future of the apartments uncertain. For now, McGuire executives said, a non-profit company will continue managing the 66-unit property while McGuire decides how best to redevelop the site.

Trammell's attorney, Hugh M. Russ III, said his client is weighing his legal options and still feels strongly about the apartment complex and about the neighborhood it serves.

"As far as I can tell, Mark always had the good-faith intent to make the project work," said Russ, who represented Trammell with his colleague Steven W. Wells, along with other attorneys.

With much of the Medical Campus built out in recent years, the Pilgrim Village reconstruction was one of a handful of projects still underway on and near the campus. The plan to construct a six-story building with apartments and shops aimed at graduate students, Medical Campus workers and low-income residents sought to capitalize on the neighborhood's rapid growth.

Other Medical Campus spinoff projects remain in the works. They include the proposed $35 million partnership between Sinatra & Co. Real Estate and St. John Baptist Church to renovate all 150 apartments at McCarley Gardens; Ellicott Development Co.'s renovations of the former Our Lady of Lourdes Church, and nearby new construction, to create retail and restaurant space, office space and apartments; and a new, $7 million University at Buffalo life-sciences incubator.

But the unraveling of the Pilgrim Village plan muddies the outlook for a key, 11-acre property just north of the burgeoning Medical Campus. In a physical sign of that so-far-untapped promise, piles of dirt and debris left over after five buildings were torn down two years ago sit just across the street from Kaleida Health's gleaming Gates Vascular Institute.

But after 30 years, the complex was aging and outmoded for the current needs of tenants, and the growth of the nearby Medical Campus made it attractive for redevelopment.

The first phase of this Campus Square development called for a $96 million, six-story structure, totaling 260,000 square feet of space. The L-shaped building would have included 152 apartments, with 62 affordable senior units and 90 market-rate units aimed, in part, at graduate students.

It also promised first-floor retail and commercial space – for a grocery, coffee shop, restaurant and dental office – and room for the Muhammad School of Music and the relocated Ms. Barbara’s School of Dance. This required tearing down five buildings, with 25 townhouse units, while the remaining 65 townhouse units were to receive a $3 million overhaul.

A proposed second phase added another 300 units for students, medical staff and conventional housing, with 20 percent renting at below-market rates, bringing the estimated cost to $200 million. 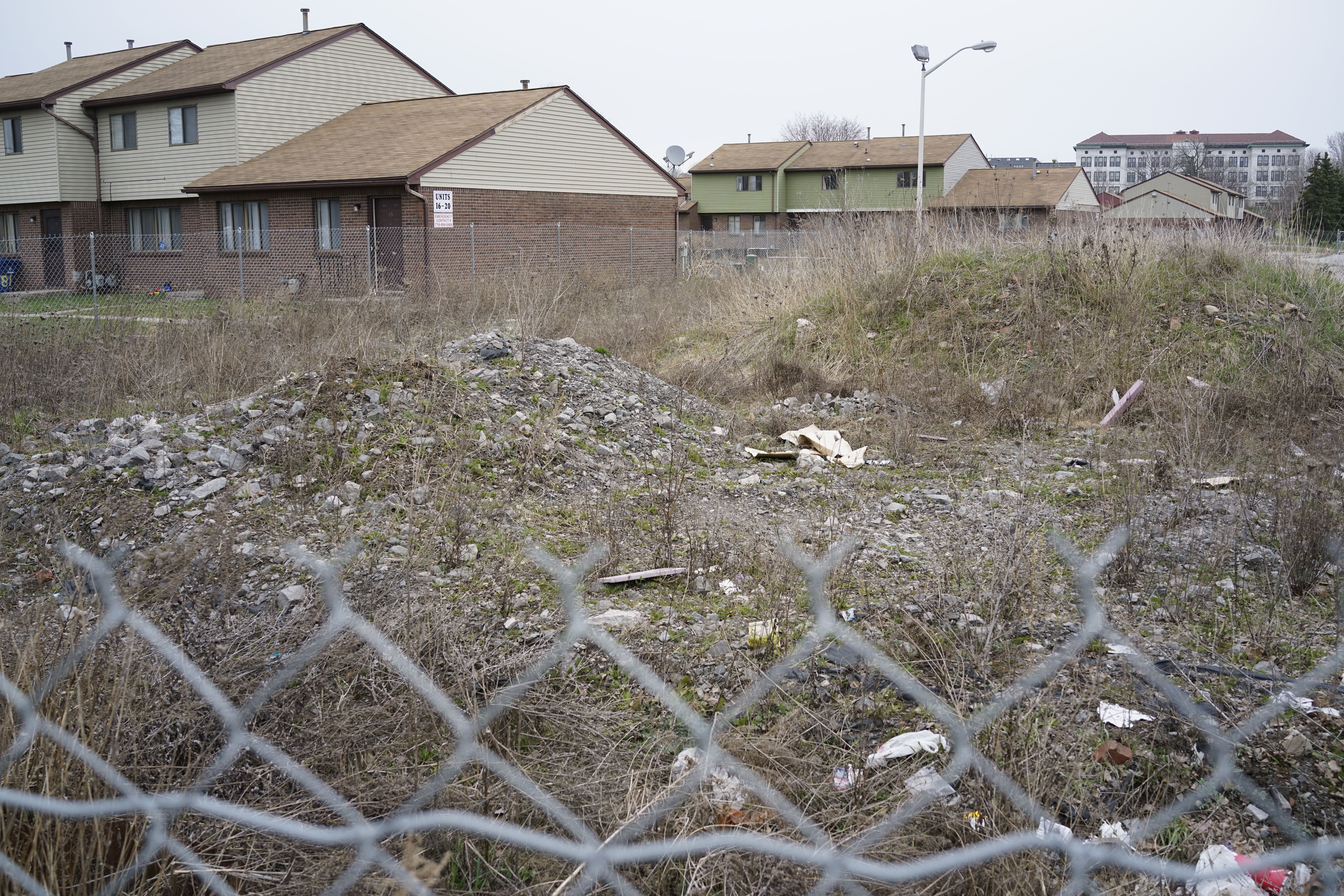 The view through a fence at Pilgrim Village near where several buildings were torn down before redevelopment stalled. (Derek Gee/Buffalo News)

Crews tore down five buildings in 2017, with McGuire officials saying all of the residents were relocated to renovated townhouses elsewhere in Pilgrim Village.

But their plans languished as the developers ran into unexpected hurdles.

The U.S. Department of Housing and Urban Development filed suit against Trammell in 2014, accusing him of financial misconduct.

Trammell denied the charges, but agreed to settle the case for $650,000, an amount paid by McGuire. The settlement barred Trammell from managing the project in the future, so the partners had to bring in another firm instead.

Meanwhile, McGuire said the high-profile accusations against Trammell made it hard to obtain financing for the redevelopment. So McGuire purchased $7 million in mortgages on the complex from the lender, and filed a foreclosure action against Trammell in April 2017, seeking to remove him altogether.

At the same time, Trammell was seeking a new partner, with new financing, to replace McGuire.

State Supreme Court Justice Deborah A. Chimes last summer urged the two parties to resolve their differences. The sides by October worked out a settlement that Chimes approved.

Trammell was exploring breaking up the Pilgrim Village property into three parcels, one of which he would sell. Trammell failed to provide a required survey of the three parcels, she said, nor did he make any payments toward the more than $7 million Trammell owed to McGuire or toward the $5 million he borrowed from Northwest Savings Bank – a debt McGuire later bought out.

In response, McGuire exercised its right to acquire the property through a deed in lieu of foreclosure, Shainbrown said.

Trammell had filed for Chapter 11 bankruptcy, Shainbrown said, but the Bankruptcy Court dismissed the filing last week and Chimes upheld the terms of the settlement.

There are 66 affordable housing units at Pilgrim Village, with 47 of them occupied. Those tenants will remain under the management of Belmont Housing Resources for Western New York, Shainbrown said.

Looking ahead, McGuire said it has no specific plan for the site right now, but initial work probably will involve rehabbing the existing housing on the site.

The company also wants to clean up the part of the property where demolition took place, and any development would start there. Eventually, McGuire envisions doubling the number of housing units on the site, to 120 or so, Shainbrown said.

The company also plans to meet with neighbors including City Honors School, Cornerstone Manor, the Medical Campus and residents. "Whatever we do will be done with a tremendous amount of community outreach and with input from the neighbors," Shainbrown said.

Russ defended his client's efforts to pursue the development and said Trammell isn't giving up on building something for that neighborhood.

"He really wanted to help the near East Side, and to help that area, and it just didn't work," Russ said.