At my first invitation to a Korean restaurant I winced, having been thoroughly indoctrinated by the television show "M*A*S*H" and its disdain for Korean food. Kimchi was a punchline, treated as something unimaginably exotic instead of just spicy sauerkraut.

If that’s still all you know about Korean cuisine, I’m here to help you learn what you’ve been missing. From vegan-friendly pasta dishes to grill-it-yourself barbecued beef, Korean cuisine can please a wide range of palates.

The Korean restaurants of the Buffalo area aren’t thick on the ground – there’s only six I know of, from Niagara Falls to Amherst, and none in the city itself, but there’s plenty of variety, and enough options to get a solid grounding in a cuisine that deserves better exposure.

No, it’s not all spicy. And no one will make you eat kimchi if you don’t want to. Allow me to explain some of the basics, as represented in local restaurants.

The banchan come first. They’re a fleet of little dishes that come to the table before most entrees. They’re usually three to six in number, a sort of pre-appetizer to nibble on between other bites. They’re usually only a few morsels, and can be replenished if finished.

This is where you’re likely to first see some variety of kimchi, usually fermented Napa cabbage, chopped into bite-sized pieces and flavored with garlic, scallion and chile flakes. Daikon radish and cucumber are also common. 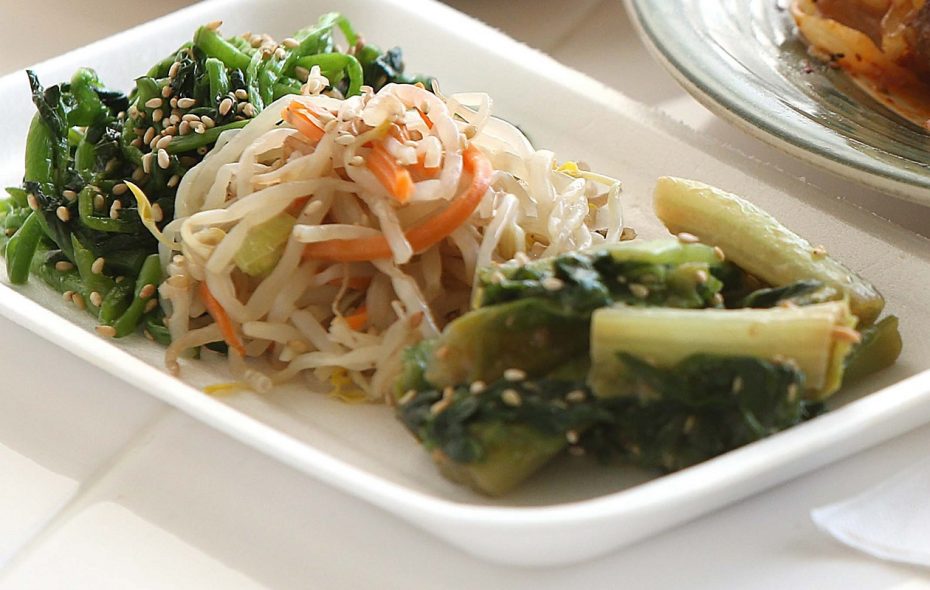 Some variety of kimchi is likely to be a part of the banchan. (Robert Kirkham/News file photo)

Cucumbers, blanched bean sprouts, spinach or other greens, broccoli, potatoes, zucchini and radish can all show up in various guises, lightly dressed with sesame oil, or fermented, as the cook chooses. Sweet and chewy fish cake slices are a common nonvegetable banchan.

Banchan make excellent accents for Korean-style barbecue. Marinated meats and seafood are grilled by diners, then tucked into lettuce leaves with a dab of sauce, usually doenjang, a fermented soybean paste that’s like miso.

Some people tuck rice in there, too, for a mini-burrito bite. Bulgogi is the most famous, beef shaved and marinated in soy sauce, ginger and sesame oil, but galbi, short rib, is a close second. Duck, chicken, marinated pork and unseasoned pork belly are other common choices. Amherst's Woo Chon is the only place in town with table grills. Other places cook the dishes in the kitchen and bring them out, which is better than nothing, but not nearly as much fun, or flavorful.

A dish we love: Enjoy Korean barbecue, where you can grill your own dinner

Stews and soups are a mainstay of Korean cuisine. Chigae, sometimes spelled jjigae, are stews. They usually come to the table bubbling furiously, steam rising, to be spooned out over bowls of rice. Dwen jang chigae, as served at Woo Chon, is a cauldron of sliced pork and tofu cubes in a fermented soybean paste broth that gives the entire proceeding a salty umami undertone. 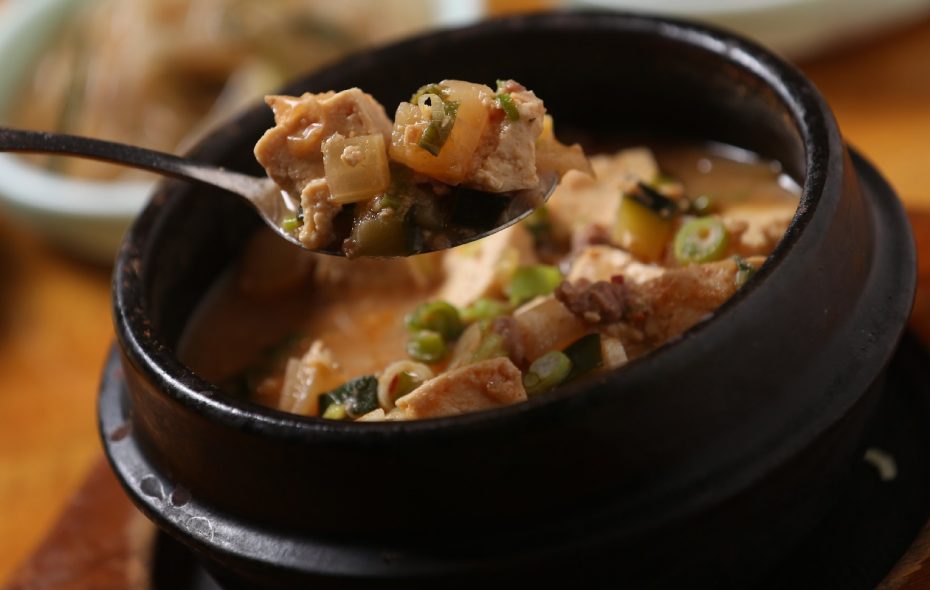 Tang are soups. Koreana in Tonawanda serves what it calls pork kalbi, a pork bone broth soup with potatoes and chile. Samgaetang, Cornish hen simmered in ginseng broth with dates, reputed to have health-boosting properties, can be found at Woo Chon and Tonawanda's Chin Hills. A soup relative, bangyetang, made with a halved chicken, can be found at Koreana. 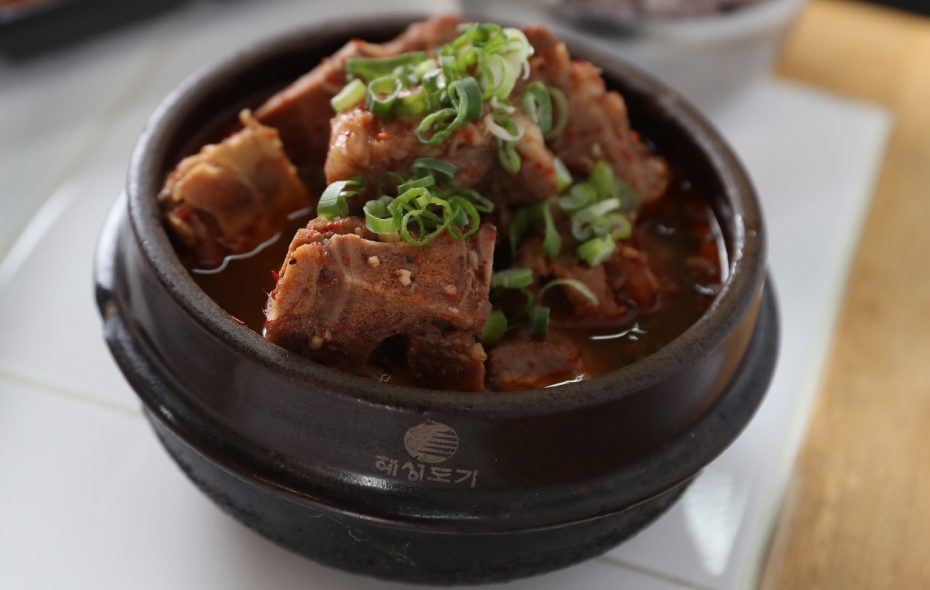 Savory pancakes called pajun serve as appetizers or side dishes. Eggy batter is poured over chopped scallions, kimchi, shrimp, onions and other ingredients, to be fried into a pizza-sized bronzed disc and sliced into wedges.

Japchae is one of the most popular vegan Korean dishes, a tangle of chewy, clear sweet potato starch noodles stir-fried with matchsticked vegetables and onion. Spinach, scallion and shredded carrot are frequent companions. The finished product is aromatic with sesame oil after a ride in the wok.

Cheese buldak is a modern Korean junk food classic: chunks of spicily sauced chicken under a blanket of bubbly melted mozzarella cheese. Asian cuisines don’t generally traffic in dairy products, but this exception has become a classic drunk food option. Bul dak means “fire chicken,” so let your server know if you want to feel the burn. Only spotted at VIP Karaoke in Amherst.

Let's explore West Side Bazaar: At 2:30 p.m. May 2, News Food Editor Andrew Galarneau is hosting an afternoon affair in the place that's dollar-for-dollar the most interesting dining room in Buffalo. Come get samples – more than you'll be able to finish – from Burmese, Laotian, Thai, Japanese, Ethiopian, Puerto Rican and Chinese cuisine available at the immigrant-supporting space. These events have sold out before, so get your ticket here now.

Garlic chicken is the Korean version of General Tso’s chicken – chunks of breaded and deep-fried chicken in a sprightly sweet-and-spicy sauce with an emphatic ration of garlic, as found at Koreana.

Bibimbap is a mix-it-yourself rice salad usually served in a hot stone bowl. Toppings can vary, from all-vegetable assortments to eggs, cooked or raw, and seafood or sliced cooked beef. Diners add gochujang, fermented chile paste, to taste, and stir it up before digging in.

The bowl is usually so hot that the rice forms a crust while you’re eating, and can be chipped off as a crunchy treat later in the meal. 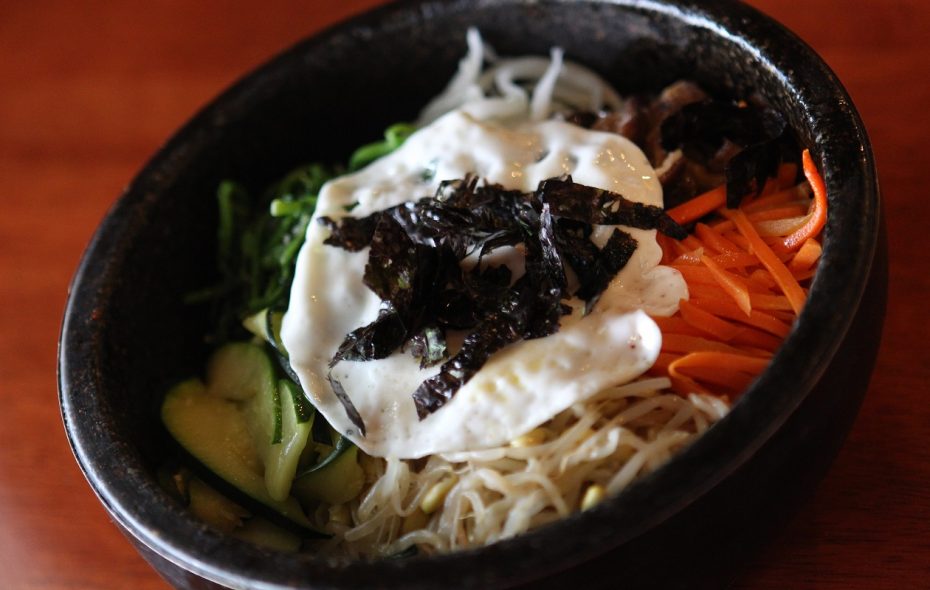 Grilled mackerel, simply seasoned, is a Korean treat. Skin-on fillets or cleaned whole fish are grilled on griddles to bring out the richness of the oily flesh.

Jjajangmyon, found at Koreana, is a Chinese-Korean dish that tops thicker-than-spaghetti noodles with a tarry, salty, semisweet black sauce made from bean paste, pork, and aromatics like ginger and garlic. 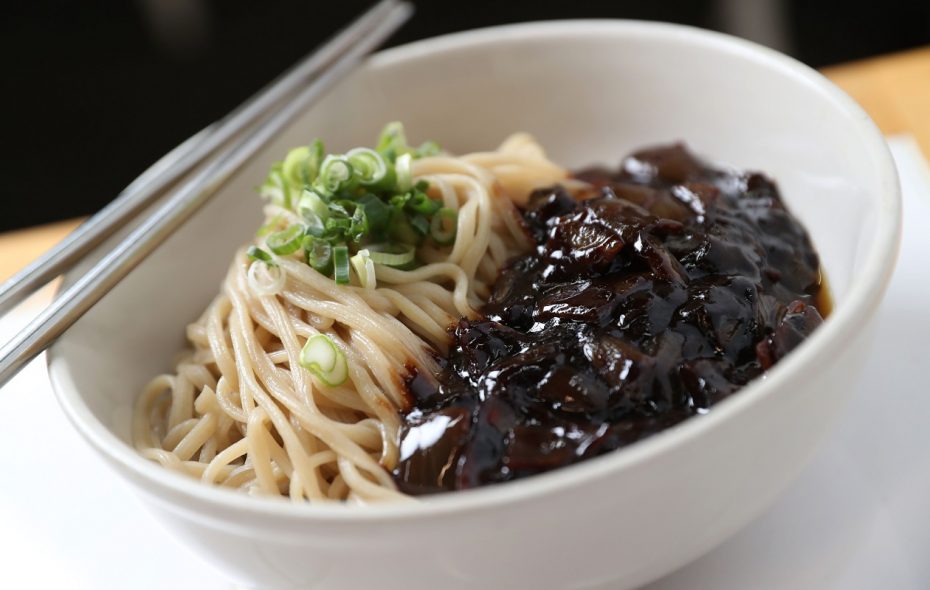 Spicy ramen found in Korean restaurants is typically punched-up versions of the inexpensive instant noodle packets, not the carefully calibrated Japanese pasta soups. At Arirang, a version comes topped with a melted slice of American cheese, a fried egg hiding in the bottom of the bowl. At Koreana, versions come fortified with shrimp and squid, or sausage and Spam.