Travis Yost has been involved in the world of hockey analytics for a decade and is part of TSN's Hockey Analytics team. Prior to joining TSN, Yost was a contributor at the Ottawa Citizen, The Sporting News and NHL Numbers, and he has been a consultant for an NHL franchise. He will be contributing breakdowns on the Buffalo Sabres for The Buffalo News this season. Follow Yost on Twitter @travisyost.

As it stands, the Buffalo Sabres have 15 roster players signed, 28 standard player contracts on the books and about $26 million to play with when unrestricted free agency opens.

A slice of that money will be used to take care of a couple of notable expiring contracts, starting with Jeff Skinner, who is going to command a significant pay raise after an outstanding 40-goal season. Other possible extensions include Jake McCabe, Linus Ullmark, Evan Rodrigues, Johan Larsson and Zemgus Girgensons. Those are mostly depth players who won’t count much against the books, and it’s unlikely that Buffalo brings back all these lower-tier players. (Especially considering how badly their depth players have failed them over the years.)

While Buffalo won’t have $26 million in cap space, they will have ample money to play with come July 1. Though this remains a draft-and-develop league, the reality is Buffalo needs to quickly find complementary talent.

One of the more interesting names that should be on Buffalo’s radar is Vegas’ William Karlsson. One year ago, Karlsson felt like a lock to stay with the Golden Knights. He bloomed out of nowhere after a few unspectacular seasons in Columbus en route to a 43-goal and 78-point season in 2017-18. Despite a massive shooting percentage regression this season, Karlsson still added 24 goals and 56 points on Vegas’ top line.

But Vegas’ roster has materially changed in the last year. The biggest story early in the 2018-19 playoffs is that Vegas’ “second line” has completely taken over the first-round series against San Jose. Mark Stone might be the early Conn Smythe Trophy favorite, and Max Pacioretty and Paul Stastny have been dominant. But these also are three players whom Vegas didn’t fully envision having available last year. You get talent when it comes available, but there is a price with doing so: the Golden Knights are actually $3 million in the red in terms of cap space for next season, with the big three taking up 27 percent of the cap.

Vegas will easily get cap compliant, but certain decisions will make that more difficult. No decision will be more difficult than deciding on the RFA in Karlsson, which expires at the end of the season. He signed a one-year arbitration award worth a bit more than $5 million last offseason. With another year of top-six productivity, you would expect that his price tag in the market is going up, but perhaps not substantially so.

We also know the Sabres have a glaring need for talent behind Jack Eichel, specifically, and the Eichel line more generally. To that end, it begs the question: What should we make of Karlsson as a long-term second-line option, and should Buffalo be an interested suitor?

Let’s get our hands around Karlsson first. One of the exercises I like to go through is to pull out a few handfuls of key performance indicators – the types of data points that tell us how much a player is really moving the needle for his team. This can be as simple as his rate scoring, and as complex as expected goal rates with a given player on the ice. But let’s start with some of the more principal individual data points, and how Karlsson stacks up against his peers over the last two seasons. (Here, we would interpret a player with a 100 percent grade as better than all his peers by that measure; 0 percent would indicate the opposite.) 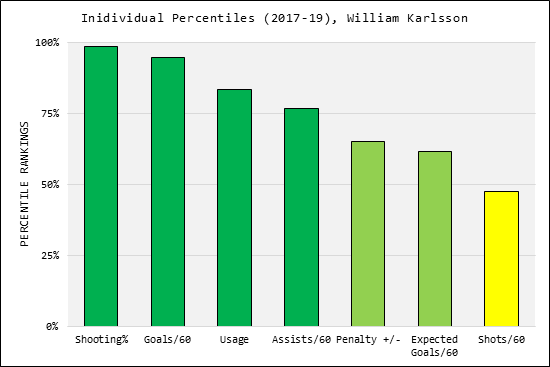 Karlsson’s individual offensive numbers are quite explosive. Some of this hinges on his 2017-18 campaign, but Karlsson was again a reliable producer in 2018-19, and he did it with an average 8.5 on-ice shooting percentage. We would expect Karlsson’s shooting percentage to continue to normalize over time, but it’s worth noting that all his indirect offensive measures – the assist rates he carries, the penalties he draws with regularity, and the volume at which he generates shots – are all top-six quality. Qualitatively, Golden Knights head coach Gerard Gallant and GM George McPhee clearly love his game. No forward has logged more minutes in all situations than Karlsson (18:46/game) for the Knights over the last two seasons. 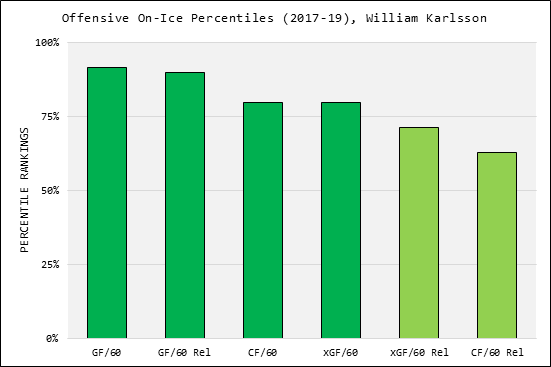 These numbers look better than our first data set. Karlsson is exceptional at not only driving play, but creating dangerous scoring opportunities for himself and his teammates. Only 9 percent of forwards across the league generated more goals per 60 minutes than the Knights did with Karlsson on the ice (including Toronto’s Auston Matthews, Nashville’s Filip Forsberg and Tampa Bay’s Nikita Kucherov). Although a small piece of that is driven by higher than expected shooting percentages, it’s noteworthy that the more underlying numbers – the shot volume, and where those shots were coming from on the ice – were always quality.

This is primarily why Vegas’ top line – featuring Karlsson, with Jonathan Marchessault and Reilly Smith on the wings – has been so terrifying for two seasons now. They live shift after shift in the offensive zone and can generate attacking sequences in flurries. Even when they are bottled up on the defensive side, they are exceptional at transitioning play.

Speaking of defense, let’s take a look at the other side of the puck. 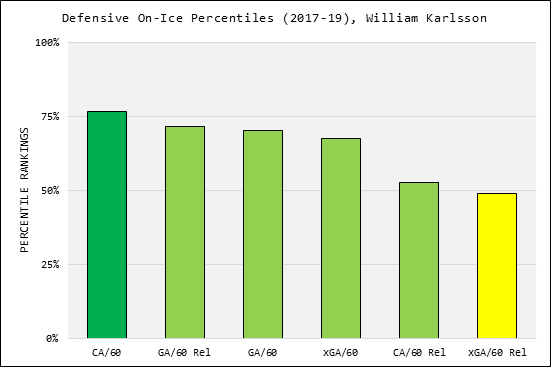 The defensive numbers are a little less captivating than the offensive numbers, but we are still talking about a forward getting consistent second-line quality results. (Karlsson has suppressed shots to the degree of a first-liner, but most every other defensive measure sits in that 50th to 75th percentile band.)

Pair that with strong individual and on-ice offensive numbers, and you have a bona fide top-six forward hitting the market at a time where the Sabres are flush with cap space and a heightened urgency to acquire more talent. It’s not hard to envision the type of impact he could feasibly have behind the Eichel line, too. You could push either Karlsson or Reinhart on to the wing, or put Reinhart in a more insulated third-line role to spread skill across the lineup. And the idea of Karlsson running with a forechecker such as Conor Sheary or an exceptional passer such as Casey Mittelstadt does give Buffalo some offensive credibility behind its first line.

Karlsson is one of a number of players likely to find himself on Buffalo’s shopping list. The price tag will be high, but the Sabres have the cap flexibility and the need to outbid most teams around the league. For a 26-year-old with a reliable track record, it’s certainly worth further exploration.