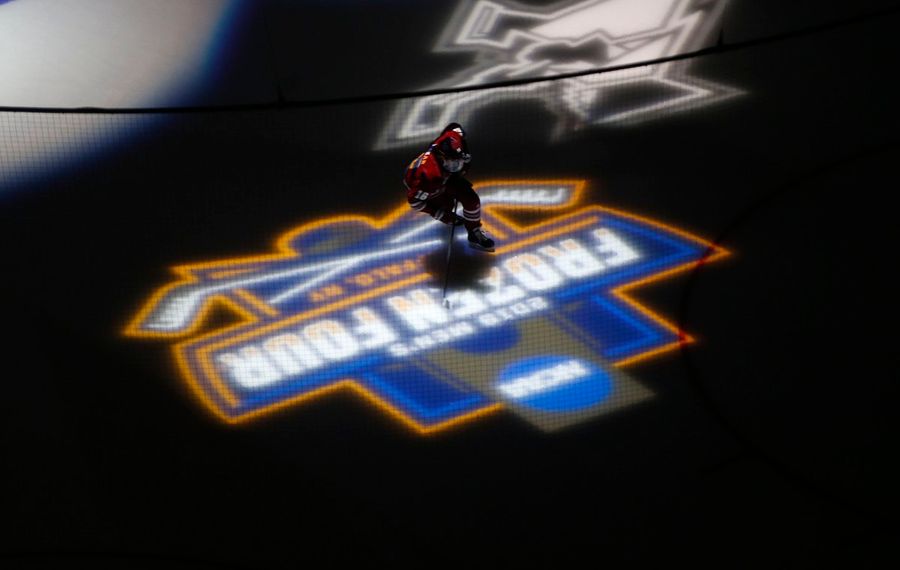 Lori Lamson and her two daughters made a spur-of-the-moment decision Friday afternoon. Knowing the University of Massachusetts men's hockey team was playing for the national championship, they bought tickets, got in the car and drove 6½ hours Saturday morning from Southington, Conn., to Buffalo to watch the Minutemen face Minnesota Duluth.

“The stars aligned,” Lamson said as she and her daughters stood outside KeyBank Center, swathed in burgundy and white UMass sweatshirts and scarves. “If UMass was playing in driving distance, eight hours or less, we were going.”

The Lamsons bought tickets through VividSeats.com, an online secondary-market ticket broker, and were surprised by the number of seating options for a national championship game.

“There were a lot left, and I was surprised by that,” Lamson said. “But to me, it seemed it would be natural to have a Frozen Four in Buffalo, given that it’s right on the Canadian border.”

It shouldn’t come as a surprise that the Lamsons were able to get tickets so easily. Attendance for both the national semifinals and the national championship game saw significant decreases for the Frozen Four.

It also was a significant drop from the last time Buffalo hosted a Frozen Four. The NCAA lists attendance for the 2003 tournament at the building then known as HSBC Arena at 18,535 for the first semifinal, 18,551 for the second semifinal and 18,659 for the national championship game between Minnesota and New Hampshire. Tickets for the 2003 Frozen Four in Buffalo also sold out more than a year in advance.

The previous Frozen Four in Buffalo also might have benefited from having Cornell, which is less than a three-hour drive from Buffalo.

“We haven’t dove into all the reasons that might have impacted attendance yet,” Steve Metcalf, the NCAA’s Division I hockey committee chairman and deputy director of athletics at the University of New Hampshire, said Saturday, prior to the national championship game. “I think it’s probably due to a combination of different things. Everyone would have loved to see more people come to the games.”

By the start of the first semifinal Thursday between Providence and Minnesota Duluth, chunks of blue seats inside KeyBank Center were empty, though those slowly filled as the two games progressed.

Attendance on Saturday remained spotty, and empty sections of blue seats remained, minutes before the start of the national championship game.

Larry Haag has attended multiple Frozen Fours across the country, and made a point to attend the event in Buffalo, an hour’s drive from his home in Rochester. He was disappointed in seeing the noticeably empty sections in KeyBank Center.

“It’s pretty empty, and sometimes, that depends on the teams that get into the Frozen Four, and where it’s at,” Haag said. “But it’s been rare, in my experiences here, to see it like this. There’s been empty seats, but not empty sections.”

His sister, Dona Haag, traveled from her home in Tampa to attend the Frozen Four, and has attended Frozen Fours in Boston and in Tampa. Buffalo, she said, was a noticeably different atmosphere.

“In Boston in 2015, Boston University and Providence played, and it was so loud, it felt like the roof was about to blow off,” she said. “Even in Tampa, it was a great atmosphere. But I didn’t expect this.”

The attendance struggles follow on the heels of last year's World Junior Championships, in which average attendance at KeyBank Center was around 5,000. The overall average for the event was nearly 11,000, thanks to 44,592 who attended the outdoor game between the U.S. and Canada at New Era Field. However, officials said they were pleased that the event drew more than 200,000 total spectators, among the top 10 for a World Juniors.

When Buffalo was awarded the 2019 Frozen Four two years ago, former Buffalo Bills and Sabres executive Russ Brandon told reporters that part of Pegula Sports and Entertainment's mission was to continue to advance Buffalo as a destination for major sporting events that would have an impact on the region.

“The Frozen Four, coming on the heels of the NHL Draft, NHL Combine and World Juniors, is another premier event that will showcase our city as the leading hockey market it has become," Brandon said.

The development of downtown hotels and the opening of The Rinks at Harborcenter helped with Buffalo’s bid for the Frozen Four. It was built, and the fans came, but not as many as some anticipated.

Part of that may have been because of the cost, and the fact that the NCAA sold tickets as packages for all three games until recent weeks, when single-session tickets could be purchased. On Friday, NCAA.com listed tickets for the national championship game that ranged from $120 to $240.

While the Frozen Four’s championship-game attendance was slightly higher than the national semifinal, tickets for the national championship game fluctuated on the secondary market Saturday afternoon. A ticket to the Frozen Four started at $75 and went as high as $249 on StubHub.com. About 2½ hours before the game, tickets in section 327 at KeyBank Center started at $60, and topped out a $209.88 for a ticket in a seat behind a goal.

Ticket prices for tonight's #FrozenFour national championship game have fluctuated this afternoon, and have dropped as low as $40 on https://t.co/ZYm5apobaP pic.twitter.com/UInP44JoF6

Also, having college hockey teams with fan bases that don’t travel the way Minnesota, Notre Dame or North Dakota do in the Frozen Four might not have helped, either.

Could Metcalf and the NCAA hockey committee see Buffalo hosting another Frozen Four?

“As far as I’m concerned, the answer is yes,” Metcalf said.

“The community, the Sabres, and everybody, from the Pegulas on down to the organization – and I don’t have to tell you how supportive the Pegulas have been of college hockey. They’ve made this site a much better site than it was 16 years ago, the last time Buffalo hosted.”

But if the numbers were any indication, not many got to see it.

From 2007 to 2015, the semifinals were considered one session. Attendance figures are from NCAA financial reports.