A University at Buffalo student who went into cardiac arrest during a possible fraternity hazing incident had no drugs or alcohol in his system, according to preliminary toxicology tests.

Fraternity brothers are believed to have ordered Sebastian Serafin-Bazan, 18, a downstate resident, to perform exercises in their University Heights residence late Thursday night and into Friday morning when he began experiencing physical distress, two police sources told The Buffalo News.

They said Serafin-Bazan had recently been treated for a respiratory ailment, possibly the flu.

“One of the fraternity brothers told us that they carried him outside to get him some fresh air after he fell and hit the back of his head on a coffee table,” said Patty Adams, who lives next door to 69 Custer St., a residence associated with the Sigma Pi fraternity. “We were told he had the flu.”

Another neighbor had told The News Friday he had seen four or five individuals carrying a person from the house and placing him on the front lawn. One of the individuals stayed, while the others fled, UB senior Lavontae Armwood said.

Besides the people who removed Serafin-Bazan from the house, Armwood estimated that in total 20 young people fled from the scene. An ambulance crew arrived at the residence shortly after midnight Thursday.

One of the two police sources speculated that the young people who had been at the fraternity house panicked.

Sergio Serafin, a brother of Sebastian, said Saturday that the family is upset and did not want to speak at this time.

“We really don’t know what happened,” he said.

Part of the police investigation is focusing on how long it took before a call was placed for emergency medical assistance, the other police source said.

“There was a time lapse before emergency personnel were called,” the police source said. “Some valuable time may have been lost.”

An official with the national office of Sigma Pi, headquartered in Lebanon, Tenn., said an attorney for the fraternity has been sent to Buffalo and an investigation is being conducted by the organization to determine what happened.

“We are looking forward to getting to the bottom of this,” the official said.

Erie County District Attorney John J. Flynn said the fraternity's lawyer asked to review the Buffalo Police homicide squad's files on the investigation, but the DA said he would not permit that.

"Absolutely not," Flynn said. "I am not going to allow any outside entity to look at an internal investigation while it is being conducted."

Buffalo Fire Department rescue personnel were believed to be the first on scene early Friday and they summoned police officers.

Serafin-Bazan of Port Chester, which is in Westchester County, resided in a university dormitory. Police said they believe it was on UB's North Campus. But he had been temporarily staying at the Custer Street residence, not far from UB’s South Campus. A UB website identified him as a medical technology student. 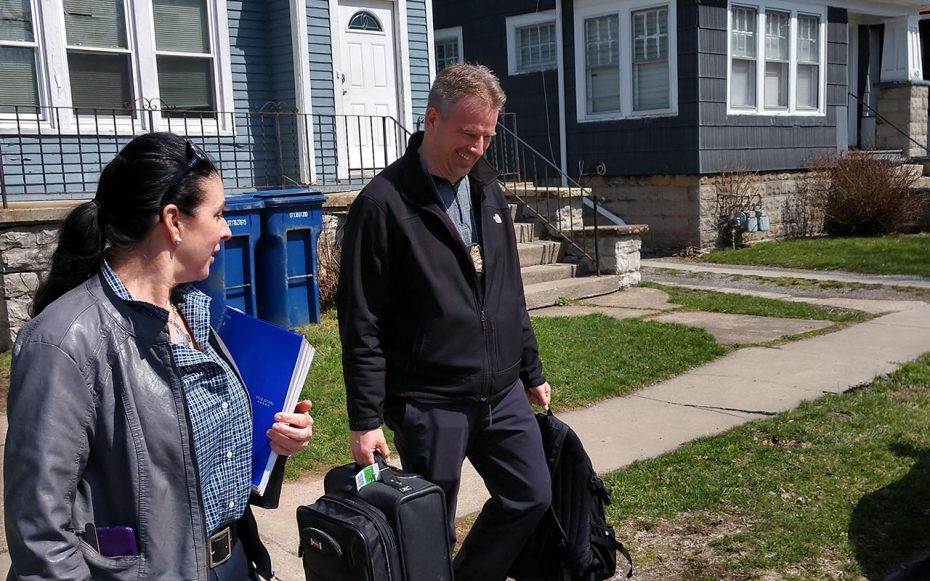 With the weather warming up and sunny skies on Saturday, many UB students were outdoors in University Heights and expressed concern for their fellow student.

“I don’t participate in Greek life, but honestly I was not surprised. Everybody is upset. They are supposed to be brothers,” said UB student Mike Horan. “We all learned about this in an email from the university."

The email from A. Scott Weber, UB’s vice president for student life, stated that the student had been taken to the hospital “with a serious medical condition” believed to have occurred during a possible hazing.

“Out of concern for the well-being of our student body, effective immediately, the official activities of all Greek-letter, social fraternal organizations are suspended,” Weber stated. “Specifically, these organizations are prohibited from recruiting and engaging in new member education activities; participating in university-related events on or off campus as a fraternity or sorority; and conducting meetings regarding fraternity or sorority functions or activities."

Adams, the Custer Street neighbor, defended the fraternity brothers who live next door, saying that when she was in a wheelchair last year, several of the young men helped her up the steps and into her home.

“Whenever they had a party, if it got too loud, they told us to let them know and they would quiet things down or send people home,” Adams said. “They have always been polite to us.”

One of the police sources, who was not authorized to speak, expressed concern for Serafin-Bazan’s family.

“I can’t imagine the family down in Westchester County getting this call,” the source said. “The poor family. Our prayers go out to them.”