It is literally true that at 8 a.m. Aug. 15, 1969, I had no idea I was going to be covering a transformative event in American cultural history 8 hours later.

I was a reporter at The Buffalo Evening News with 3½ months on the job. At that exact moment of my life, I was trying desperately to stop being a '60s screw-up and to start being a respectable adult citizen.

Then News Editor Murray B. Light asked me to go cover the Woodstock Festival. He was reading downstate newspaper and wire service intimations of the Thruway calamity to come when the festival began later that night. An epochal story was being dropped into the laps of upstate New York papers. He wanted in. My desk was 10 feet from his.

He made it clear: He wanted a news story, not a review.

I called my wife to tell her what I'd been asked to do. She shrieked encouragement in my ear. Light's secretary, Jeanne Ray, performed one of her offhand everyday miracles and got me on an airplane to the Sullivan County Airport. She also got me a hotel room in nearby Monticello where, under editor's orders, I was to stay as much as possible.

Clearly, we had no intelligent idea what I was supposed to be covering. We envisioned something that actually resembled "concerts." We didn't know what rough beast was about to be born and transform America while half a million showed up appropriately dressed.

So there I was in a respectable olive drab suit and tie I could never wear again. After paying a Monticello cab driver a fare that both of us knew was maliciously exorbitant, I found myself being driven through a maze of back roads around the highway crowds and to a place about three miles from Max Yasgur's farm in Bethel, where the gargantuan blowout was happening.

All I saw was an expanse of grass trampled by a lot of people walking in one direction. "This is it?" I asked the guy. "Yup" he answered. "See all those people? Just follow them. It's a hike, but you'll get there eventually." 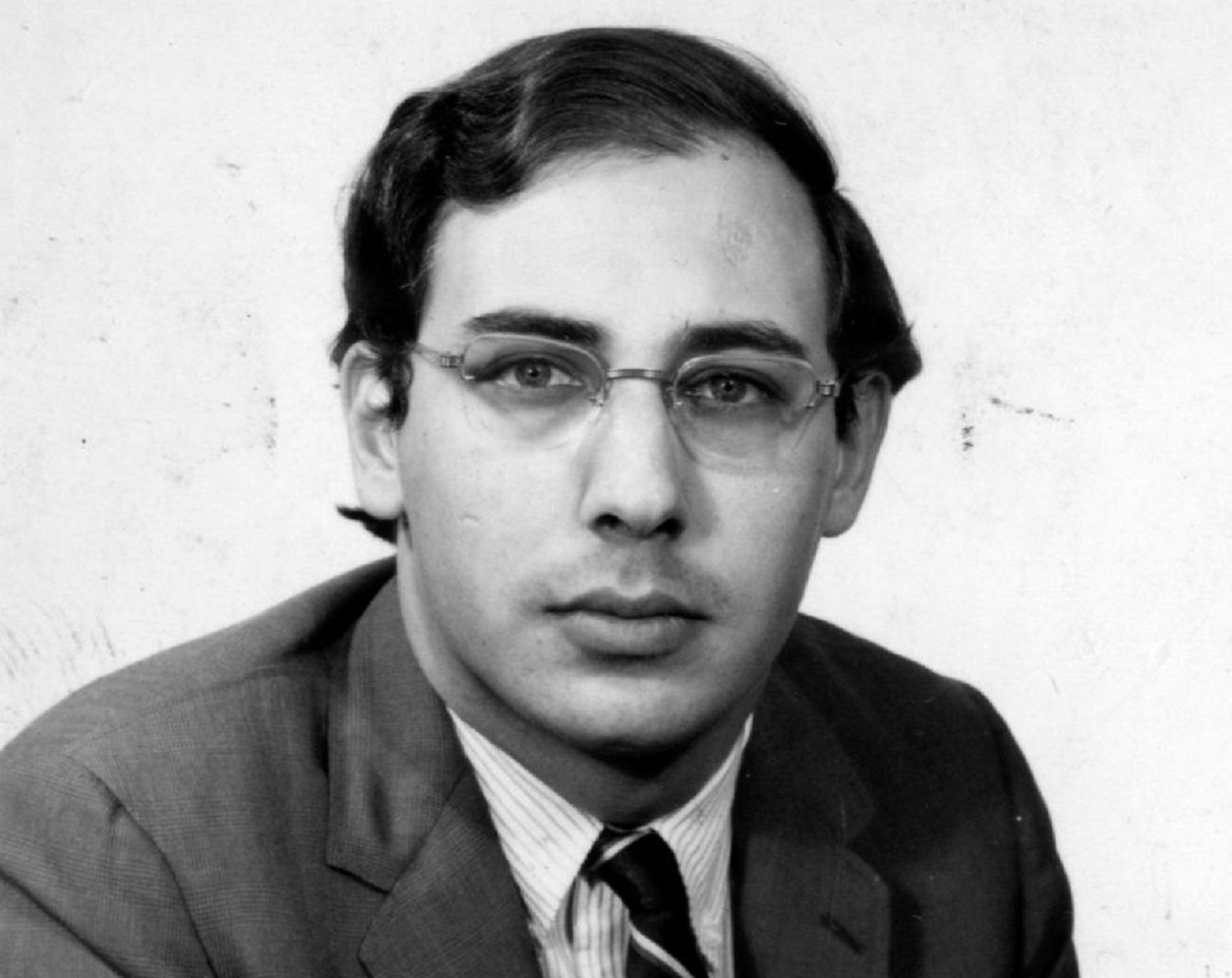 Jeff Simon in 1971, just a couple years removed from covering Woodstock for The News.

I did – in my suit and tie. My opinion of suits didn't change much, but my opinion of ties was never the same again, even though I wore one every day  from sixth grade all through high school.

The 50th anniversary of the transformative event is coming up. Quite predictably, they are again staging some bash that purportedly has some sort of relationship to the original, even though it is almost certainly going to be American music business as usual. Woodstock festivals really only come one to a century, no matter what they might call intended sequels.

OK, let's say you weren't born yet. There are a lot of you – more than 200 million in fact. Let's say you were around back then, but otherwise occupied on that August weekend – not to mention disinclined, anyway, to be the sort of person who attends a three-day rock concert with a half-million other people.

It is, so help me, possible in the year 2019 to have a greater idea of what the Woodstock Festival was like than it was for many of us who were actually there.

Just getting there, frankly, was my major achievement that weekend. The Thruway was closed. "Sullivan County is a great big parking lot," said the festival director of security to the New York Times. (Showbiz overstatement would get a major workout before the weekend was over. So would downstate suspicions of upstate doings.)

My coverage of the event depended entirely on editors and, in particular, a rewrite man named Al Zack back home in Buffalo who made my telephone dictations from Sullivan County infinitely better than they were. Let's just say, it took a small village to make my stuff sing. But, sing, amazingly some of it seemed to by the time it appeared in the newspaper.

No, you can't experience the rain and mud and drugs and privation and chaos of Woodstock the way those of us could who were there. (There was a press tent. It immediately became an infirmary when the bad acid started taking its toll. "The flat blue acid is poison," the crowd was told.) Nor could you experience the overweening pride in the event's nonviolence (being soaked to the skin helped that) or the quasi-religious political metamorphosis that people convinced themselves had taken place. Or frolic nude in ponds.

But so help me, the Woodstock Festival you can have in your home is, in some ways, fuller than the one you could have if you were there. It is, at the least, drier, cleaner, and near a comfortable bathroom and stocked refrigerator. Food is abundant as you want it to be. And you can fast forward through anything less than arresting. (Janis Joplin herself – who didn't have long to live – said she wasn't pleased with her Woodstock performance. I wouldn't advise skipping it, but you ought to know that.)

But you can have your own Woodstock now behind closed doors. You won't have half a million people for company, but you can absolutely be right there.

How do you go to the Woodstock Festival 50 years after the fact?

1. Watch Michael Wadleigh's extraordinary film of the event. The 40th anniversary edition of it is available and a half-century version will come. The cost is substantial, but reasonable, all things considered.

2. Listen to Rhino's 40th anniversary edition set of music, another artifact soon to have a half-century version.

3. A new 50th anniversary edition of what I consider the definitive book about Woodstock – "Woodstock – Three Days That Rocked the World" – edited by Mike Evans and Paul Kingsbury, with a foreword by Martin Scorsese, who was there as a film editor for Wadleigh. ("There was no way to get food or go to the bathroom," he said about his post near the stage. "I almost never saw the audience.") The 287-page book is available from Sterling Press at $29.95.

It is still moving, on the record, to hear Richie Havens' litany of "freedom, freedom" to kick everything off and still more than a little obnoxious to hear 18-year old Arlo Guthrie take pride in the crowd being so large it closed the freeway. (Later, he says in the book, "This was one of those moments you wished you could have done it again. But is still one of the fonder memories of my entire life. I will never forget it and I wish I had more sense years ago.")

If you want to have a sense of what Woodstock was actually like, beginning to end, no one has ever done it better than Evans and Kingsbury do it in their book. For instance, here is John Fogerty on what it was like Saturday night to follow a soporific Grateful Dead who put everyone to sleep. "There were a half-million people asleep, covered with mud. These people were out. No matter what I did, they were gone. It was sort of like a painting of a Dante scene, just bodies from Hell, all intertwined and asleep and covered with mud. And this is a moment I will never forget as long as I live: a quarter-mile away in the darkness, on the other side of this bowl, there was some guy flicking his Bic (lighter) and in the night I hear, 'Don't worry about it, John, we're with you.' I played the rest of the show for that guy."

Here's Carlos Santana watching Sly and the Family Stone playing from 4 to 5 a.m. Sunday: "I got to witness the peak of the festival, which was Sly Stone. I don't think he ever played that good again – steam was literally coming out of his Afro."

Said Sly's bass player Larry Graham, "Our songs would segue one into the other and many times there wasn't a place where you could get a big audience response. When we did stop playing, there was a tremendous roar unlike anything we had ever heard. It was dark and you couldn't see all these people, but to hear that was like, 'Wow.'"

I cannot tell you now how I dearly I wish I would have had an infinitely more conventional Woodstock experience than the ill-prepared professional one I had. I still don't know that I'd have subscribed to all the American socio-historical mythology of the event. What there's no doubt about historically is how transformative it was.

Too bad you can't experience it now, as it was experienced 50 years ago.

But then 50 years ago, you couldn't know Woodstock the way you can now in your living room in 2019.