On a day when more than 40 volunteers gathered in Olcott to assemble and float net pens at the Town of Newfane Marina on Saturday morning, many of them a few hours later accepted prestigious awards from the Niagara County Federation of Conservation Clubs at its annual awards banquet in Lockport.

Past and present fisheries ambassadors were recognized as well as others involved with shooting sports and protecting the Second Amendment.

“We’re all about doing our part to make sure that Lake Ontario is the best fishery that it can be,” said Joe Yaeger, president of the Lake Ontario Trout and Salmon Association, recipient of the Leroy Winn Memorial Award for 2018 Club of the Year. “It’s a collective effort through club members and other volunteers to make sure things like the pen rearing projects happen. Salmon that are stocked in the pens survive better than two to one over the direct stock of fish (dumped directly into the water) and this year every single Niagara County salmon will be held in pens.”

Yaeger’s LOTSA club (www.lotsa1.org) also is involved with teaching people to fish during monthly meetings (the first meeting of the year is April 11) and through the salmon school it runs through the Greater Niagara Fishing and Outdoor Expo (www.niagarafishingexpo.com) each January. The show offers angling education for all levels of sportfishing proficiency.

The main point person for LOTSA’s pen rearing effort, spilling over into a project at Wilson Harbor, is Capt. Alan Sauerland of Newfane. Thanks to Sauerland’s dedication to enhancing the area’s natural resources, he was named winner of the Milford “Pinky” Robinson Memorial Award. It was an appropriate gesture that tied in nicely with the Winn award. It’s always good to recognize the people who accomplish hidden tasks that benefit a long list of people. 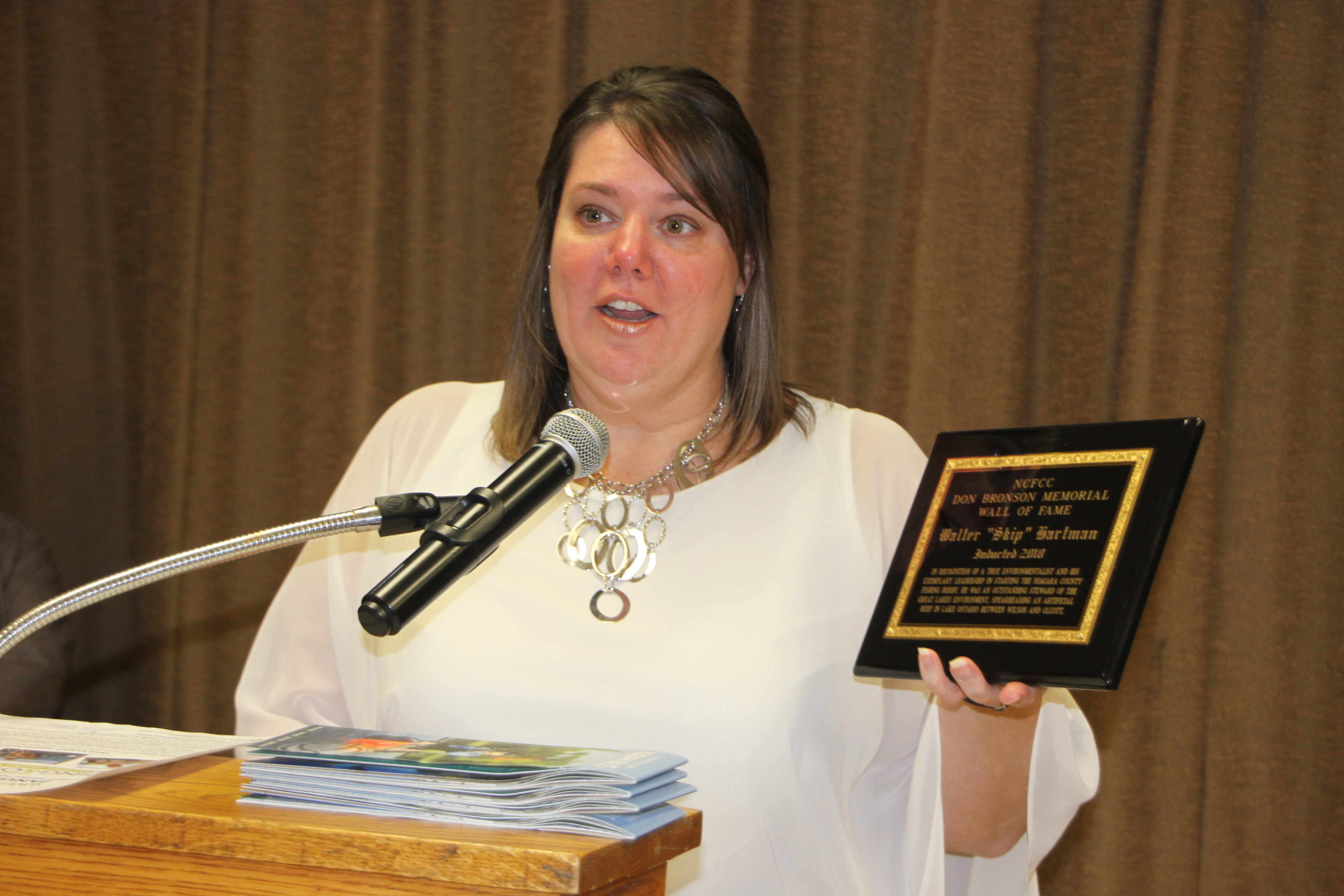 Penny Hartman-Lyman of Olean accepts the award for her late father, Walter "Skip" Hartman, who will be inducted onto the Don Bronson Memorial Wall of Fame in Lockport. (Photo by Bill Hilts Jr.)

Rounding out the fisheries recognition, the Don Bronson Memorial Conservation Wall of Fame inductee was the late Walter “Skip” Hartman of Olcott.

He was an active participant in the stewardship of the Great Lakes, and he played an important role as an advisor to New York Sea Grant’s Great Lakes sportfishery development program. He also served on the National Sea Grant panel and as a public advisor-at-large for the Great Lakes Fishery Commission and its Lake Ontario committee.

On the local front, he served with distinction as chairman of the Niagara County Fisheries Development Board for many years. He helped to start the Niagara County Fall Classic Fishing Derby, an event that has lasted for 42 years. He was one reason that Lowrance Electronics came to Niagara County to start a salmon team tournament, thanks to some of the resource enhancement projects that already were in place, like the artificial reef that sits in the lake off Hopkins Creek between Wilson and Olcott.

The Lake Ontario Pro-Am Salmon Team Tournament (www.lakeontarioproam.net), run out of the ports of Wilson and Olcott, will celebrate its 35th edition this year and is being run by Hartman's daughter, Penny Hartman-Lyman, carrying on his legacy. She accepted the award.

Hartman will be added to the Conservation Wall outside the 4-H Building of Cornell Cooperative Extension Niagara in Lockport. 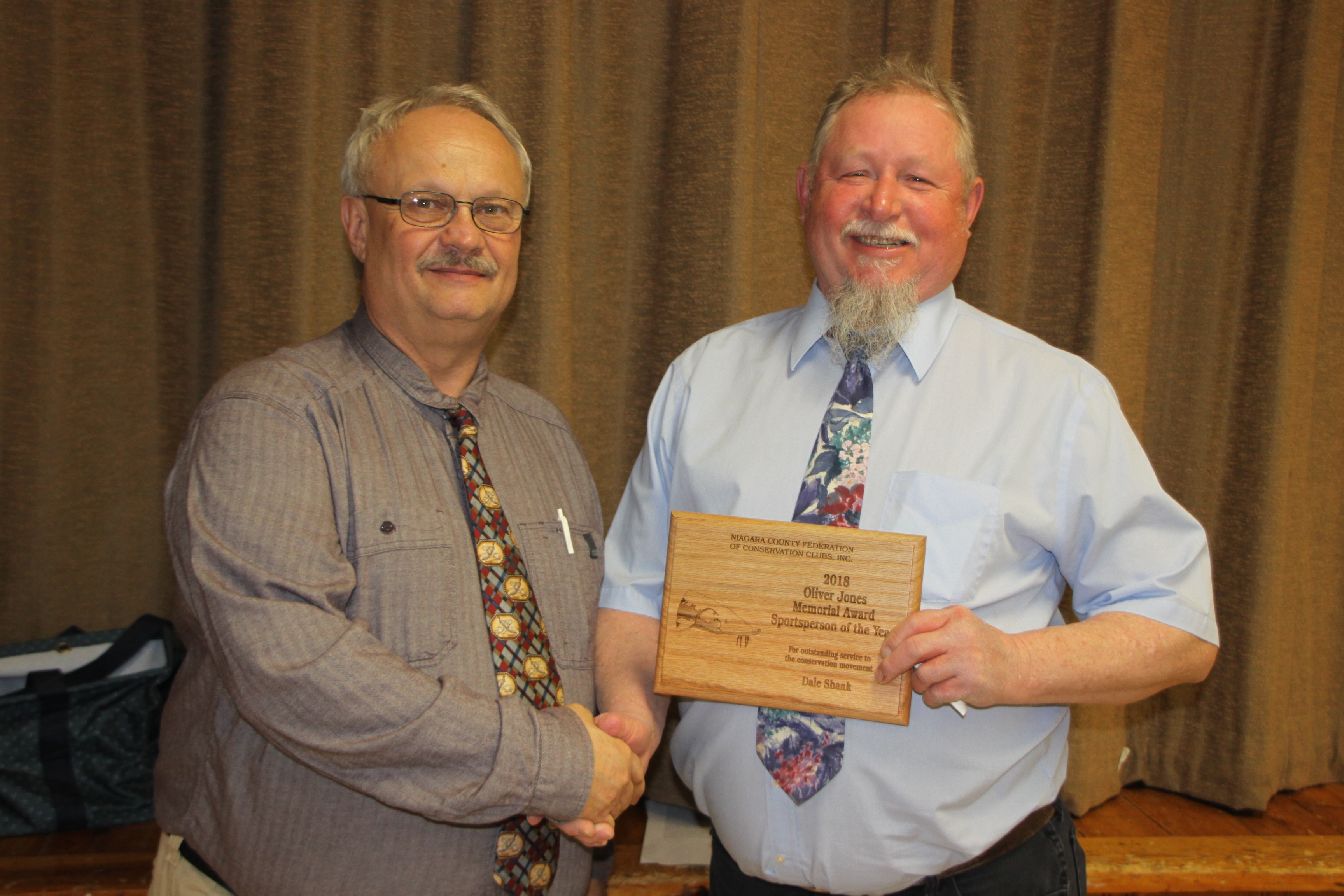 Dale Shank of Ransomville was named the Oliver Jones Memorial Award winner for 2018, symbolic for sportsperson of the year.

“I’m not looking for awards when I’m volunteering at the Three-F Club in Lewiston,” said Shank, echoing a common theme throughout the ceremony. “I’m doing this to pass on a legacy to the next generation.”

He has been involved with the club’s youth program for many years and is the youth director. A big focus is on hunter safety as well as becoming a marksman. He will be recognized by DEC this year for 25 years of service to hunter safety education in Niagara County.

Shank also helps coordinate a very successful 3-F Youth mentor hunt that teaches kids how to hunt pheasants, shoot and understand outdoor ethics, among other things, each September. Last year, he reached out to Honored American Veterans Afield for a special shoot and hunt, helping show veterans what the Three-F Club is about. It was a grand gesture that paid tribute to our service veterans. 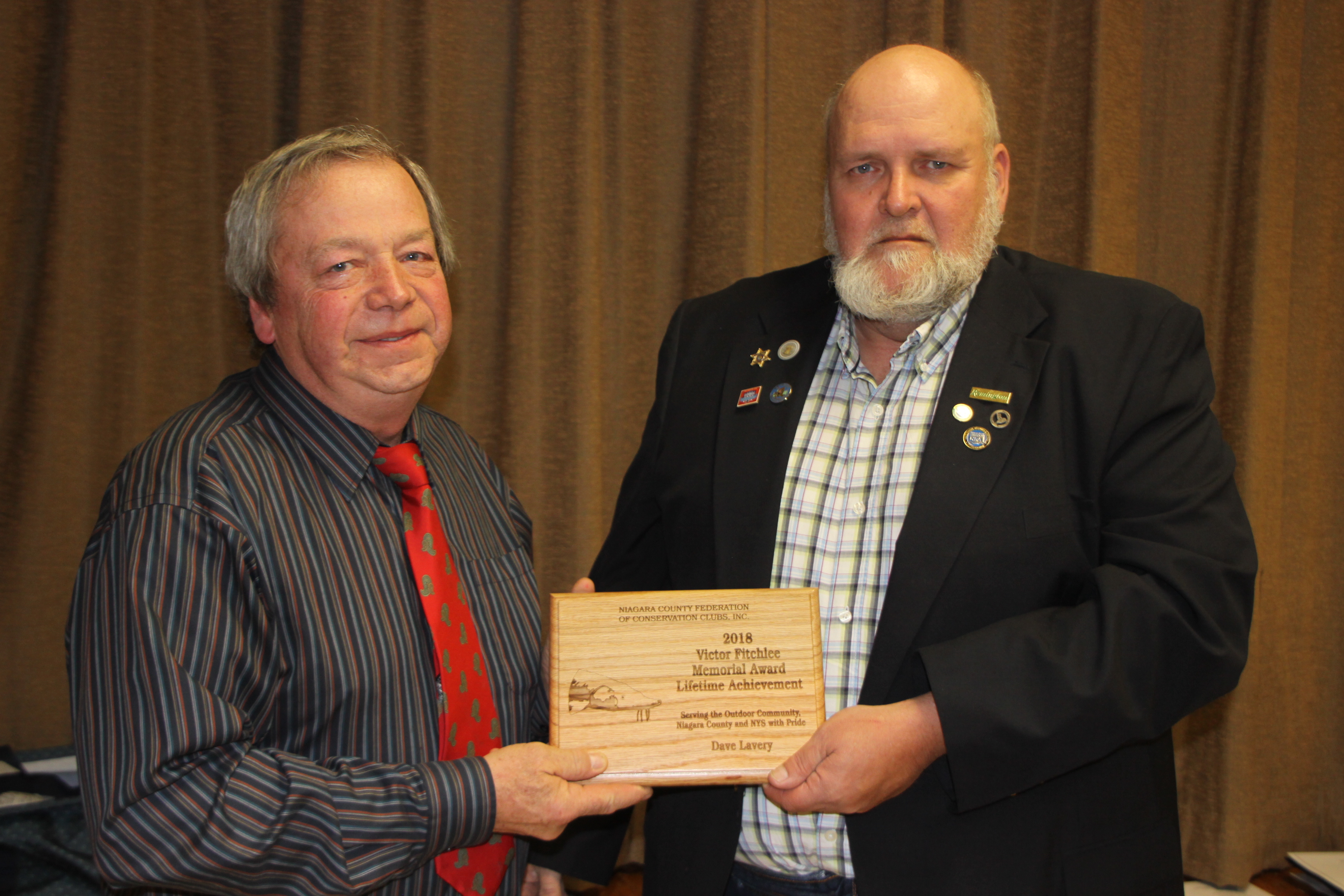 The Victor Fitchlee Lifetime Achievement Award went to Dave Lavery of Middleport. He has been an active participant in the Middleport Rod & Gun Club, North Forest Rod and Gun Club, Terry’s Corners Volunteer Fire Department and the Niagara Federation of Conservation Clubs, to name a few. Lavery also is a member of the Little Beard Club, which promotes living history education and reenactments from the years 1640-1840. He was involved with the 4-H shooting program and the 4-H pheasant rearing program. He is the county coordinator for hunter safety education, a position he’s held for over 20 years.

The John Daly Memorial Award for elected official of the year went to Niagara County legislator Dave Godfrey of Wilson. A long-time sportsman, Godfrey has demonstrated his resolve to advance Federation issues relative to shooting sports and the Second Amendment through resolutions he has sponsored on the county level.

The Carl Lass Memorial Award for Youth of the Year went to Ryan Scheithier of Amherst. He is senior shooter on the Three-F Club’s Youth Club, earned the NRA Civilian Award for distinguished expert marksman and will attend SUNY-ESF in Syracuse.

The Ken Berner Memorial Award for special dedication to a Sportsmen’s heritage program went to Ed Pettitt of Newfane for his work with Second Amendment forEver.

The John Long Sr. Memorial Award for Business of the Year went to Lockport Cable TV for its outdoor programming and willingness to help promote conservation programs in the county.

A special president’s award was presented by 2018 presidents Dave Kern of Lockport (who left in September) and Chris Schotz of Sanborn to longtime Federation treasurer and volunteer Dave Whitt of Lewiston.