With his wife half a world away in the United States, no roommate, and a tenuous grasp on the local language, Andy Burns had many nights to himself during his two seasons in South Korea.

“Between the video games and Netflix, there’s a lot of down time to just think about some stuff,” Burns said, pleased to have re-signed with the Toronto Blue Jays and re-joined the Triple-A affiliate Buffalo Bisons. “I felt like I grew more in two years over there than I had in a long time.”

Burns, 28, was selected by the Blue Jays in the 11th round of the 2011 draft out of the University of Arizona, and spent six seasons climbing the minor league ranks before making his major league debut on May 9, 2016. The versatile infielder was promoted and optioned back to Buffalo four times that season. In total, he spent 10 games with Toronto, scoring twice but recording no hits in six at-bats.

But in early 2017, Burns requested and was granted his release to sign a one-year contract with the Lotte Giants of the Korean Baseball Organization. The 6-foot-2, 205-pound Burns reportedly received a $50,000 signing bonus and $730,000 annual salary, and he enjoyed the experience so much, he re-signed for 2018.

“You’re a full-blown rock star over there, because everyone can recognize you,” Burns said. “It’s a lot different than here, where there’s a lot more diversity. There, you’re Korean. A white person sticks out like a sore thumb. Just walking into a restaurant you get noticed by everyone, or Starbucks or whatever, and so that aspect of it was a really, really cool experience. Just to be almost a celebrity figure, as crazy as that was – especially from having a little bit of time in the big leagues and being here in Buffalo for two years, like, you don’t really get noticed when you go places – to everywhere you go, someone recognizes you. That was a pretty interesting adjustment. Big time.”

The Giants finished in third place his first season, but dropped to seventh in the league standings last year. KBO teams can sign up to three foreign players per season -- two pitchers and one position player -- and when the Giants decided against re-signing Burns this season, the Blue Jays welcomed him back.

Bisons manager Bobby Meacham worked with Burns in Single A and Double A.

“I think he’s the same young man,” Meacham said, “but what I’ve noticed is he’s a little bit more relaxed. He’s more reassured. Sometimes you’re hoping and grinding and trying to get (to the majors), you’re trying to do everything just right, and that’s how he was, and every mistake was magnified, like, ‘Oh my gosh, I hurt my chances to move up or get to the big leagues.’

"Now, it feels like he still works hard, he’s still grinding away, but just with the expectation of playing in the big leagues, not just the hope.”

Burns credits the change in his disposition to his experience overseas.

The most jarring, immediate issue was the language barrier. Burns didn’t know how to speak Korean when he first arrived, but always had access to a translator.

“The language was definitely something that was difficult,” Burns said. “You start to just tune everything out, because you have no idea what they’re talking about. And I gained a greater appreciation for the Latin players that come here, especially at a young age and not knowing the language and how difficult that is. I feel like I have a greater appreciation for guys coming here to the States now.”

“One of the coolest things that I learned over there was how to smile every day,” Burns said. “Just because if you want people to be around you and you don’t speak the language, they can only read your face. So just having a smile and a positive attitude every day kind of made guys gravitate toward you. And then you could, over time, develop that relationship.”

Burns attributes that lesson to former Chicago Cubs pitcher Brooks Raley, who has been with the Lotte Giants since 2015.

“He kind of found his way there and it’s one thing he told me early on, ‘Whatever happens, find a way to smile through it,’ ” Burns said. “And I think from a life side, that’s as important as anything, just having that good energy and good attitude every day when you show up to work, wherever that may be.” 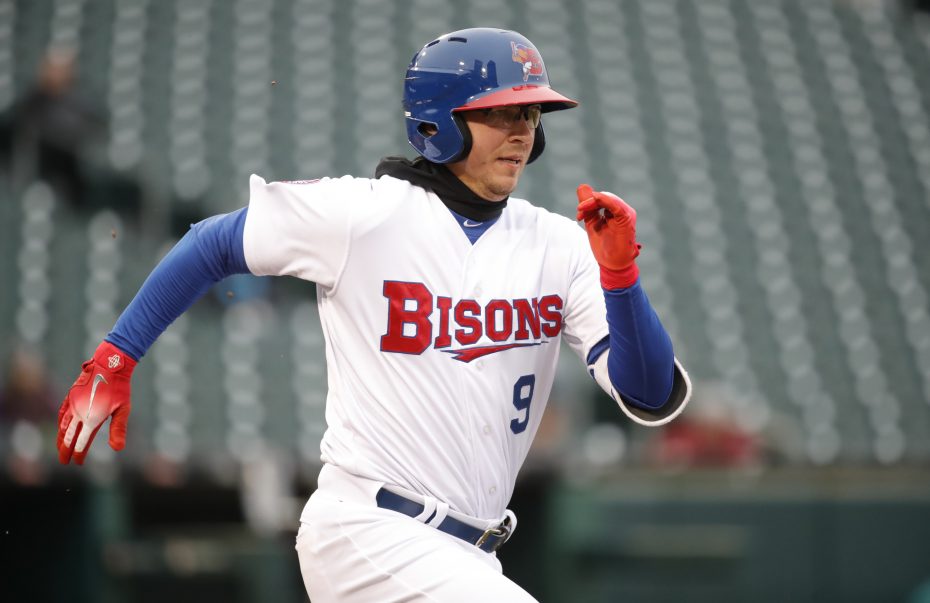 Andy Burns is happy to be back in Buffalo. (Harry Scull Jr./Buffalo News)

The food took some getting used to as well.

Burns said his go-to meals were cold buckwheat noodles with either pork or beef, and his go-to “home” meal was Domino’s Pizza.

“I thought it was really good and really similar, but their pizzas are more extravagant, like they’ll have a shrimp and something pizza,” Burns said. “And I was like, no, don’t want that. Let’s stick to a basic pepperoni.

“Their food is really, really good, but that’s all they eat all the time. So over the course of eight months being over there, it got a little exhausting.”

The overall experience of playing in the KBO, Burns said, offered him a great deal of perspective, helping to strip away the burden of worrying about the next step in his career.

“Another thing that I learned over in Korea, and it was the first time it really happened in my career, is how to actually be present,” Burns said. “Going through the minor leagues, it’s always, ‘I want to get to the next level, I want to get to the next level,’ and I got to the big leagues and I was like, ‘I don’t want to get sent down.’ I got sent down and was like, ‘I want to go back up.’ And when you’re over there, you’re not going anywhere. You’re in the big leagues, your only job is to go out and play that night to help the team win and that’s all that really matters.

“And by doing that on a daily basis you perform at a higher level, as opposed to worrying about outside stuff. You just focus on tonight and the game that you’ve got and the pitcher who’s out on the mound, and so you just learn how to really be present and be focused where you’re at, at that moment, to win the game that you’re playing.

“I would say that’s one of the things I learned over there that I feel like I can help bring back to guys who have always had that feeling, ‘Man, I want to get to the next level.’ Just being present.”

This is the change the Meacham sensed, and the manager hopes that lesson translates to some younger players.

“I think what he can bring to these guys, now they can feed off the energy he had before, but not the negative energy that comes from worrying,” Meacham said. “He used to worry a lot about everything. But now, there’s no anxiety. There’s no worry there. He believes in himself. He knows what he’s accomplished and he knows the next step is the next thing he wants to accomplish, and I think that can rub off on some of the guys.”

Burns is grateful for the experience of playing overseas, and to be back with the Blue Jays organization. He is off to a strong start, hitting .353 with a home run and four RBIs in the first five games of the Bisons' season.

“They’ve been great to me my whole career,” Burns said, “so to come back here it’s kind of been full circle, and now to put back on the Bisons uniform for the first time since 2016, you walk in and it’s almost like you never left. I’m excited for this season. We’ve got a really good group of guys, and I think we’re going to win a lot of ballgames.

"Being around Buffalo and knowing that they need a winner, I’m hoping that we’re going to be the team that kind of busts through and makes that happen.”