The Buffalo Olmsted Parks Conservancy and civic advocate Kevin Gaughan have reached a "framework of cooperation" on his plan for a Jack Nicklaus-designed golf course adjacent to South Park and a refurbished course at Delaware Park.

The nonbinding memorandum of understanding suggests an arms-length approach by the conservancy rather than an embrace of the project, but it could eventually become one.

"Kevin has evolved with Nicklaus Olmsted Buffalo, with more of a business component that's taking shape that I think our trustees have responded favorably to," said Stephanie Crockatt, the conservancy's executive director.

But while "no one disputes the grander vision for these ideas," the conservancy needs to see feasibility studies and a business plan, Crockatt said.

"We have to understand what the timeline is going to be, what the different components are and whether or not Buffalo can sustain two Jack Nicklaus-designed courses," Crockatt said.

"There are a lot of questions, and we're hoping this MOU will help bring forward the answers so we can make better informed considerations on whether or not these projects move forward in reality."

Gaughan first approached the conservancy about his plan in 2014. He said the agreement allows the nonprofit he set up to raise funds locally with the conservancy's approval. That, he said, will help attract contributions from outside Western New York.

"We all know that every journey begins with the first step," Gaughan said. "But what we learn here in Buffalo is that sometimes that first step can be the most challenging.

"What's important is we have a framework of cooperation, we have a shared intention of producing the necessary studies that will demonstrate the viability of my proposed plan, and we have every intention to collaborate with the conservancy to see that this wonderful potential is realized for our city." 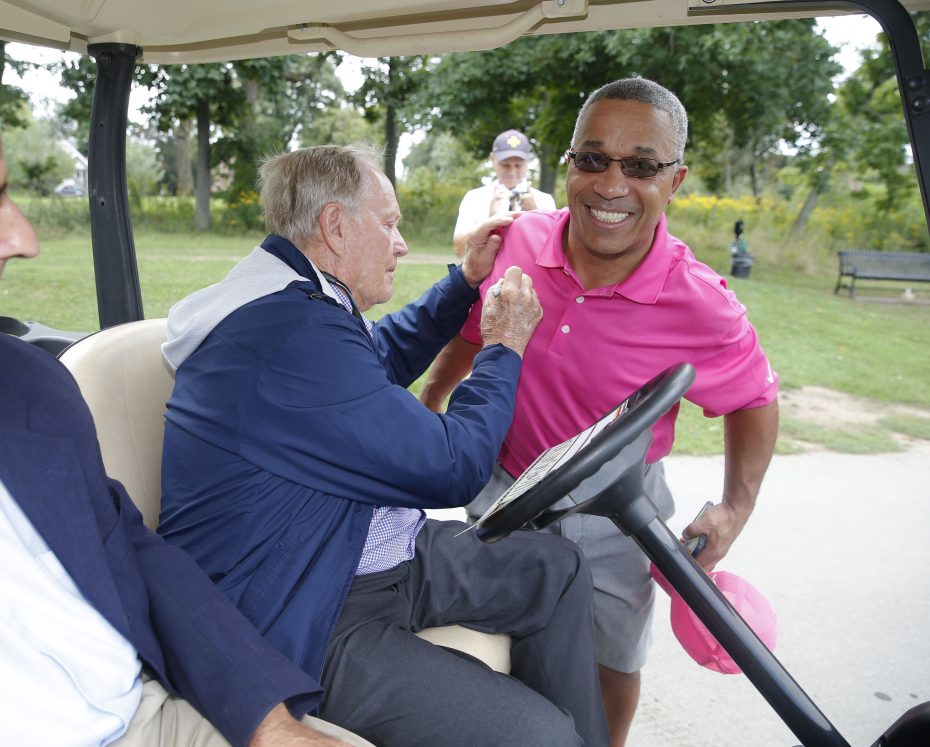 Jack Nicklaus signs the shirt of Danny Mendez, a golfer in Delaware Park, during a tour. (Robert Kirkham/News file photo)

The agreement spells out several ways in which the conservancy and Nicklaus Olmsted Buffalo will pursue their respective missions.

The agreement clarifies the roles and responsibilities of each organization, and requires both groups to speak publicly as one voice. It acknowledges that decisions on what occurs in Olmsted parks rests solely with the conservancy and the City of Buffalo.

Nicklaus Olmsted Buffalo is also responsible for paying for studies, design work and generating public input that will be presented to the conservancy and the city for consideration.

The project now has a revised cost of $32 million, about 25 percent less than an earlier estimate.

Nicklaus, who visited the golf courses on Sept. 17, has offered to design them at cost.

Nicklaus said at the time that he was attracted to the project partly for the chance to work in an Olmsted-designed park. He said he looked forward to designing a new golf course, and he liked the idea of aiding a long-sought goal of restoring the Olmsted-designed arboretum in South Park, which would be possible by removing the golf course there now.

Peter Hunt, a Nicklaus Olmsted Buffalo board member who is putting the business plan together, said he believes the golf course planned near South Park could be a jewel in Buffalo's crown.

"Here we have the person who probably has one of the highest name recognition in the world coming to Buffalo, New York, and making it part of his legacy," Hunt said. "I think we can't overestimate the value of that in Buffalo."

Hunt added that the momentum around the Nicklaus projects could also unleash more funds for the Olmsted parks.

But he warned the clock is ticking. Nicklaus is 79, and nearing the end of his design work.

"There is a time urgency here," Hunt said.