The video from a Ring doorbell camera starts with a young man, in a dark coat, gloves and ski hat topped with a pompom. He walks casually past a white fence, up to a tall gate and appears to fiddle with the knob. It doesn’t open.

The video, posted to fellow Ring users in the Elmwood Village, then shows the man turn back around, stop and then hop over the fence. Some rustling noises follow.

Investigators with the Buffalo Fire Department say they believe the man in that video taken at a home on Tudor Place in the heart of Elmwood Village on the city's West Side is the same person now in custody for burglarizing and setting fire to five garages early Tuesday morning.

The suspect was identified as Nathan Wasyl, 20, of 18th Street.

Fire Commissioner William Renaldo said investigators believe Wasyl traveled from one garage to the next by bicycle.

The first fire was reported just after 12:30 a.m. at a garage with a car inside at 86 Cleveland Ave. Wasyl has been accused of setting the driver's seat of a 2010 BMW on fire with a lighter, according to documents filed in Buffalo City Court. He was also charged with petit larceny for allegedly stealing change from the car, according to court documents.

The second fire came just before 2 a.m. at a garage shared by residents at 85 and 81 Highland Ave. Wasyl has been accused of climbing a pole and entering a second-floor window that was covered in cardboard. When he got inside, he ignited cardboard and a sofa, according to the court documents.

Next was a fire at a two-car garage next to Revolver Records at 831 Elmwood Ave. There, Wasyl moved multiple blue tarps that were covering a doorway and tried stealing two bicycles located inside. Wasyl used the tarps and plastic on the locks to start this blaze, according to court documents. 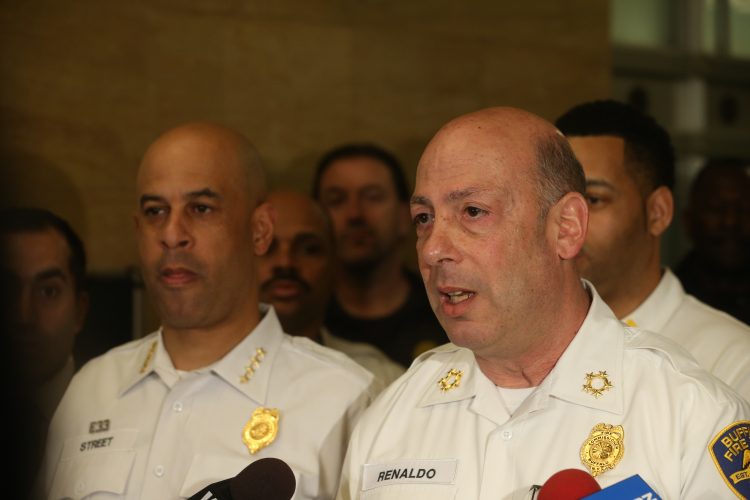 The fourth fire, reported at 2:53 a.m., damaged a garage at 208 Cleveland Ave. Inside that structure, Wasyl ignited a wood pile set up in the shape of a teepee, according to court documents.

A fifth garage fire was reported at 3:19 a.m. at 90 Penhurst Park. Police believe Wasyl broke into the garage through a service door and then lit a sofa and wicker chair, according to court documents.

The sound of sirens and the smell of smoke filled the neighborhood as fire crews raced from scene to scene throughout the night.

Buffalo police officers scoured the neighborhood, driving up and down Elmwood Avenue and side streets, seeking out the arsonist.

Around 4:30 a.m., police captured Wasyl near the garage of a house on Middlesex Avenue, north of Delaware Park. Wasyl entered a vehicle in the driveway and tried opening the garage by clicking the automatic garage door opener, police said. Police in the area stopped when they saw him standing in the driveway, according to court documents.

Representatives of the Erie County District Attorney's Office plan to file a motion to recuse the office from handling the prosecution because one of the victims is an employee of the office, spokeswoman Kait Munro said.

Renaldo said his investigators believe Wasyl was burglarizing the garages and then setting the fires, possibly to cover his tracks.

Two firefighters suffered burns battling the fire on Highland Avenue; one is already back on duty, while the other will be out for about a week and a half. They were identified in court papers as Eric Witkowski and Cleotis Jones Jr.

Firefighters were able to contain all of the garage fires – a challenge in Elmwood where century-old houses stand in narrow lots within just a few feet of each other.

Molly Hutton, who co-owns the two-story, four-car garage on Highland that was burned down, recounted how she awoke to the smell of smoke at about 2 a.m. At first she and her husband thought nothing of it.

"And then we really smelled smoke and we heard some commotion," she said.

One of the blazes Buffalo firefighters battled overnight was on Highland Avenue. (Photo courtesy of Molly Hutton)

She looked outside and saw that their garage was in flames. At least a dozen firefighters were in the driveway trying to put it out.

Hutton and her family stayed inside the house and watched from their kitchen window as the firefighters continued to try to extinguish the flames for the next several hours.

They managed to keep the fire from spreading to Hutton's house, but two cars, several bicycles, a snowblower and a lawnmower were destroyed.

She recalled how as they were talking to a fire inspector, a call was dispatched about a fourth fire.

Hutton's garage was closed and locked Monday night, she said. She thinks it's possible the arsonist set something on fire and threw it on the roof because the fire seemed to be coming from the roof of the two-story garage structure, she said.

Her family spent the morning arranging for rides and dealing with their insurance company.

Hutton was thankful to the fire department for keeping her home safe. "The firefighters did a great job," she said. "It was scary."