Washington H. Lewis served nearly a decade in the Air Force, from 1978 to 1987, before enlisting in the Army Reserves for nine months.

All of it occurred during peace time, between the end of the Vietnam War and the start of the first Gulf War. He participated in military maneuvers in a remote area of South Korea, but saw no action on the battlefield.

"I served two tours and missed every bit of the fighting," recalled the Buffalo resident, who is now a bus driver for the Niagara Frontier Transportation Authority.

Lewis had always felt he was destined for military service. He has an older brother, Robert, who had enlisted in the Air Force in 1964 and served in Vietnam during his military career.

Lewis was 16 years old and had barely spent any time outside of his East Side neighborhood when he signed up to join the Air Force. It was, at least, a chance to see the world.

"Back in the 1970s, they had the thing called delayed enlistment. That's where you sign up, actually, when you're still in high school. They have everything prepared for you. As soon as you graduate, you're out of Buffalo," he said.

Just shy of his 18th birthday and already hitched to Uncle Sam, Lewis was deployed to Lackland Air Force Base in San Antonio, Texas, for basic training before being shipped out to South Korea.

"I did go overseas. I did go to Korea. I did a remote. A remote is where just you and your troop are surrounded by the natives, and you depend on each other. They call it a remote because there's nobody there but you, basically," he said. 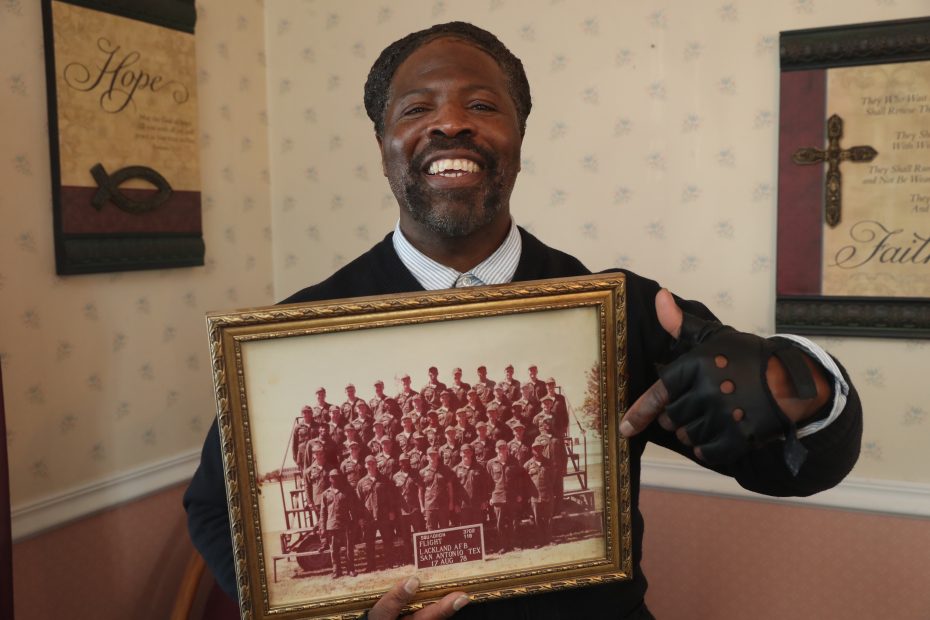 Washington H. Lewis holds a photo taken at Lackland Air Force Base, where he did his basic training. (John Hickey/Buffalo News)

Lewis said he participated in self-reliant little groups doing military maneuvers in South Korea. During his time there, Lewis was trained as an augmentee for the Air Force security police and assigned to mortuary affairs.

"If a plane goes down, you do a terrain and contour search pattern. That's where you search for (the bodies) in a circular motion within a specific area. You search for the body parts and then you tag them," Lewis said.

He also trained to be an M-60 machine gunner, which turned out to be more difficult than he had imagined.

"Man, that thing is not like what you see on TV," Lewis said of the equipment. "That thing will rip your arm off."

He also graduated from leadership school and rose through the ranks at fast clip while in the Air Force.

"I was a fast burner. At 23, I was a staff sergeant, four stripes. That was hard to do. At 23 years old, I had old men saluting me," Lewis said with a laugh.

After his time in South Korea, Lewis returned to the U.S. and was stationed at an air base in Sacramento to serve out the remainder of his tour. After his discharge in 1986, Lewis enlisted in the Army Reserves and deployed to the West Point Military Academy to begin training as physical therapy specialist. Lewis said he planned to use that training to get a job with the Buffalo Bills organization once he returned to civilian life.

"What happened was a full bird colonel came down from Washington our last day (of training) and told us they were taking back all the accreditation they had paid Southern University – $10,000 – to have the professionals come and teach us," said Lewis.

The change in military policy meant the only place Lewis could use his training as a physical therapy specialist was in the military. Without accreditation, Lewis said his training didn't come in that handy upon his return to civilian life in July 1989.

"I had a hell of time finding a job when I got back. It was crazy," Lewis said.

Lewis recalls living in his mother's basement after his discharge. There, he had to endure the occasional flood after a heavy rainfall.

"I had nowhere to go, so I had to stay there. I started going to church, and I started praying to God, and do you know I went straight from the basement straight to my own house. No apartment. That's prayer," he said.

By 1995, Lewis had begun working for the NFTA, where he continues to be employed as bus driver.

Perhaps, his greatest joy is playing the guitar, an instrument he learned to play at age 34. It's what led him to his church, New Creation Fellowship on Beach Street in Buffalo.

"It's such a joy to play the guitar, especially when you start at such a late age," Lewis said. "I've been playing now for about 23 years, and it's a blessing to play for my church," he added.