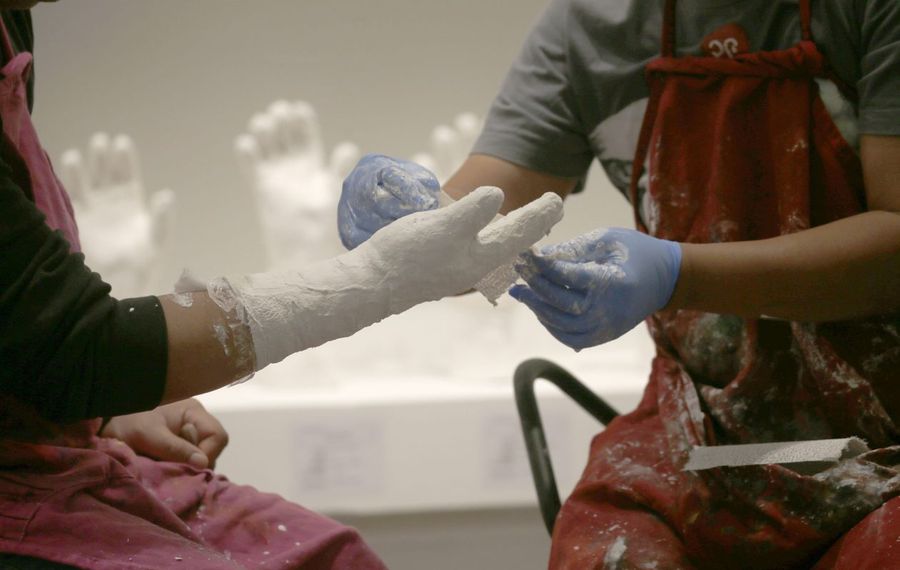 Aung Thu, a Burmese refugee and former political prisoner, sat in a black chair in a stark white exhibit room at the Albright-Knox Art Gallery on Sunday while an artist from his native country made a plaster cast of Thu's right hand.

As Htein Lin carefully wrapped strips of wet bandage plaster onto Thu's lower arm, hand and fingers, he asked Thu questions about his experiences in Myanmar, formerly Burma, where Thu was held behind bars for seven years before winning his release in 2005.

An interpreter relayed their story to patrons watching this demonstration of Lin's technique, which he uses to create casts for his exhibition, "A Show of Hands," on display at the gallery through April 28.

"This is the story telling of the history of Myanmar," Lin said in an interview Sunday.

Lin in 2013 began work on the installation, which features hundreds of plaster casts taken of political prisoners from Myanmar with cards below each hand providing basic details about their detention.

Lin, too, was a pro-democracy activist in Myanmar and was jailed for six years by the military dictatorship that ruled the country.

He brought the exhibit to the Albright-Knox because Buffalo has a large community of Burmese refugees who fled oppression in Myanmar and arrived in the past 15 years. This area has more than 8,000 Burmese refugees, including about 20 who were held as political prisoners.

"We are victims of torture," Thu, 42, said as the plaster dried on his hand.

While he was imprisoned from 1998 to 2004, Lin organized his fellow inmates to perform together, according to the gallery. He also used scraps from prison uniforms, bars of soap and other items he could scrounge up to make more than 300 paintings and sculptures.

After his release, Lin left Myanmar in 2006 for Great Britain, where he remained in exile until he returned home in 2012.

Lin started "Show of Hands" the next year. He said the exhibit allows participants to raise their hand — always the right hand — to publicly recognize their experiences as victims of abuse.

Lin brought the exhibit to New York City last year and, while there, was encouraged to visit Buffalo because of its large Burmese community.

One year later, the exhibit is nearing the end of a 10-week run at the Albright-Knox.

On Sunday, Lin sat facing Thu in the exhibit space. Lin had on thin blue gloves as he cut off one square of plaster bandage at a time, dipped it in a small tub of water and applied it to Thu's hand.

During the half-hour process, Lin talked to Thu and then summarized for Win Min Thant, who translated for the small audience. Lin and Thu both speak English, but Lin wanted them to converse in their native language during the casting process.

Thu talked about the terrible food he was provided, the overcrowded conditions and the handcuffs that linked several fellow prisoners together, requiring two or three people to go to the bathroom at once.

He said for about two years he was only allowed access to two books, the Bible and a book of Buddhist teachings and verses.

"I can recite every detail from the Bible," Thu said through Thant.

Thu was arrested in 1998 at 21, released in July 2005 and then spent four years in a camp along the Thailand-Burma border before coming here and settling on Buffalo's West Side 10 years ago.

After Lin finished, Thu said he's still haunted enough to double-check the locks at home at night and prop a shovel against the door as an extra precaution.

"I feel not secure," said Thu, who works at UnitedHealthcare and is studying for a master's degree in public administration at SUNY Buffalo State.

Zaw Win sat near Lin as the artist started another cast. He said he also was held as a political prisoner in Burma, for five years, beginning when he was 17.

He said he wasn't allowed pen or paper and his better-educated fellow prisoners taught him English by writing words with a stick on the floor of their cells.

He came to this country in 2005 and now owns a bottle return business. His son, who was 2 when he arrived here, is 17 now.

The "Show of Hands" exhibit runs through April 28 at the Albright-Knox. Lin is visiting through Friday, when the gallery will host a screening of a documentary about his work.