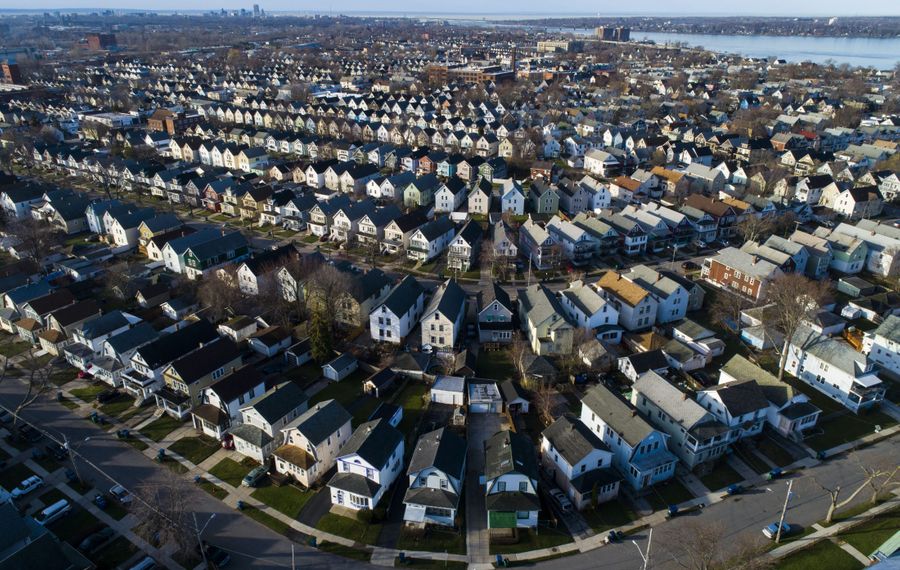 As the spring home buying season begins, it's still a seller's market.

Homes for sale are scarce, so prices keep rising. But even today's higher prices still are relatively affordable, especially compared with other parts of the country.

The local economy is solid, giving potential buyers both the means and the confidence to make what likely will be the biggest purchase of their life. And a recent drop in mortgage rates is a big bonus for buyers trying to stretch their budget for the home they really want.

But those buyers will find the number of homes up for sale locally at a 20-year low, so there will be plenty of competition for good homes in sought-after neighborhoods.

In short, the tables still are tilted squarely in favor of sellers.

"I’m seeing some of the most competitive offerings and action since the beginning of my career," said Greg Straus, broker and co-owner of 716 Realty Group. "We expect this to continue for some time."

Here's a look at the main factors shaping this year's housing market.

Homes are hard to find

For buyers, the hardest thing in today's market is finding a house that they want to buy – and can afford.

That's because the pickings are slimmer than they have been at anytime since at least the late-1990s. The number of homes for sale has plunged by 40 percent over the past three years. Going back to 1998, no other month had fewer active listings than the 2,400 homes that were up for sale in February 2019.

The number of homes that are being put up for sale remains subdued, although there are signs that the decline in listings over the past two years is bottoming out. New listings have increased during two of the past five months.

"It's off to a slower start than the last few years, but it's ramping up now," said Kristan Andersen, vice president at Gurney Becker & Bourne, citing a new listing in the Elmwood Village that had nine showings scheduled for one night.

Hunt agent Annabelle Aquilina listed four properties in the last three weeks, with all selling within the first week to 10 days with multiple offers. She's also put in four offers for buyers – all over asking price – and lost all of them.

"People have to hang in there and not get discouraged," she said.

Mortgage rates are low – and getting lower.

That's good for both buyers and sellers. For buyers, low rates help them stretch their home-buying budget, since less of their monthly payment will go toward paying interest. For sellers, that added financial flexibility means that buyers can afford to pay higher prices.

Record-low interest rates for the last decade have been one of the primary factors driving the pace of home buying, with lower borrowing costs helping to ease the sting from higher sale prices.

Rates dropped below 5 percent after the Great Recession and have stayed there since 2012. That's far lower than the double-digit levels some homeowners still remember from the late 1970s and 1980s.

Concern about the economy overheating prompted the Fed to raise short-term rates five times from late 2017 through the end of last year, causing mortgage rates to rise by a percentage point as well. That prompted some potential buyers to get off the fence and into the market before it was too late to benefit.

Now, rates have been falling again, amid concern that the economy is slowing. According to Freddie Mac, the average rate on a 30-year, fixed-rate mortgage dropped to 4.06 percent at the end of March. That's down from 4.28 percent a week earlier, and marks the biggest one-week drop in over 10 years.

"The interest rates are still good," Andersen said. "They creeped up a little bit, but then they went back down. That doesn’t seem to be a concern for a lot of buyers."

The lowest unemployment rates in a generation and slow but steady job growth have given the housing market a solid underpinning that is good for buyers and sellers.

Unemployment in Buffalo Niagara fell to a seasonally adjusted 3.9 percent in February – the lowest level since at least the 1980s. And with the region adding 1,400 jobs over the past year, there still are opportunities for people to find jobs. That's a big confidence booster for buyers.

"Incomes are good. The people that I’ve sent to banks to get pre-qualified, there doesn’t seem to be any issue," said Gurney's Andersen. "People feel relatively secure in their jobs, which helps the market, too."

However, Andersen said she has also seen a slowdown in the influx of new people coming in for jobs from out of town, especially now that the Buffalo Niagara Medical Campus is more established. "A lot of the people who were coming for that are already here," she said. "People are still coming, but not at the rate they were the last few years."

The strong housing market has been paying off for sellers over the last two years.

With homes is short supply, well-maintained homes in sought-after locations are prized commodities.

"My phone is ringing a lot. People are inquiring, both electronically and in person," Andersen said. "People are starting to come out of the woodwork."

The median sale price of homes sold over the past year rose 7 percent the last 12 months, after rising 8 percent the previous year.

While slightly fewer homes are selling, mainly because of the low number of homes on the market, they are still selling quickly. Homes last year sold in an average of 42 days – 2½ weeks faster than in 2016 – and the pace has quickened a bit this year during the doldrums of January and February, according to data from the Buffalo Niagara Association of Realtors.

The question remains: How long can this last?

"We've been at this for 10 years now with our increasing market, and historically, market trends tend to be about 10 years for real estate," Andersen added. "It's just a funny market. It's hard to pin down, because there are so many different variables."