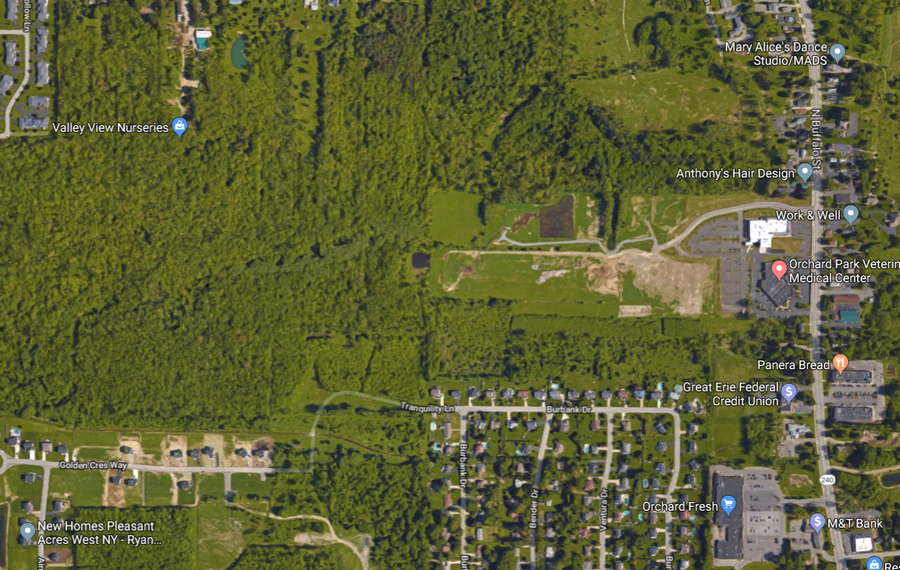 Orchard Park has had its share of major developments, from shopping centers and medical parks to an NFL stadium.

But the one town officials are looking at now from Ellicott Development is unusual, even by those standards.

The proposal being considered on open land in the town but a short distance from the heart of the Village of Orchard Park would include the town's first multistory hotel, 70 single family homes, small retail space and possibly a facility for people with dementia.

"This is certainly the biggest project the town has looked at in recent decades," Town Planning Board Chairman Harold Fabinsky said.

Several rezonings and variances would be needed for the 91-acre property, which is sure to raise concerns about traffic and character in the town of nearly 30,000.

While Ellicott Development had proposed 100 rooms in a four story-hotel, the height has been reduced to three stories after discussions with town planners, according to Sean W. Hopkins, attorney for the developer.

Orchard Park is home to several large developments, including the Quaker Crossing shopping plaza and the BrookBridge Medical Park on Big Tree Road, but this appears to be the largest mixed-used project planned to date. There are three motels in the town, all on Southwestern Boulevard.

If the hotel is approved on the parcel just outside the village, the community would join nearby villages of East Aurora and Hamburg with hotels.

"A hotel is something many people think we need. The question primarily being, is it going to be a large hotel inconsistent with the general character with the community?" Fabinsky said.

The limit on building height is 2.5 stories, said town planner John Bernard. The hotel is planned next to the Buffalo Medical Group building and behind businesses on North Buffalo Road, which are a little higher in elevation than the existing houses that front on the street, he said.

The project is planned for vacant land west of North Buffalo Road and south of Webster Road. Two new roads, one ending in a cul de sac and the other linking with Holland Lane, which would be extended, are planned off Webster. Rezoning is needed on four parcels. The developer is asking for a more restrictive zoning for the residential section.

The 70 upscale homes are planned on 70 acres, and the developer has requested they be part of a conservation management overlay. The overlay allows the homes to be built closer together than usually allowed, as long as half of the parcel remains green space and the overall density is one home per acre.

Also planned is the 100-room hotel and some commercial space. Hopkins said Ellicott has agreed that no big box stores would be developed, and commercial buildings would not be more than 30,000 square feet.

Traffic will be an issue, and town officials said a traffic study is planned. The developer has agreed to have the commercial structures be part of an architectural overlay district, which would require town review and approval to make sure they meet design criteria, Hopkins said.

The Town Board is the lead agency on the request, and will be the board to approve rezonings. The town will require a traffic study, as well as studies of wetlands, wildlife, sewer and water capacity, Bernard said.

The path to a new Southtowns trail looked smooth. Then things got rocky.