Don't stand between the Parkside neighborhood and a cup of good coffee.

JAM Parkside, a coffee shop led by Amber Small, Monica Cichon and Jesse Crouse, opened to the public at 10 a.m. March 30, the completion of what's been a concerted community effort through an uncommon strategy.

JAM, which stands for "Jesse, Amber, Monica," has more than 70 investors in the project - starting at $100 - and the only requirement is they must reside in New York. Naturally, several of the 70 come from North Buffalo and the Parkside neighborhood; they have been outspoken about the need for a coffee shop in the former Sweet_ness 7 location, which has sat vacant since January 2017, and were willing to pitch in to further the effort.

"[The business model] is unique to just a couple businesses in New York State," Small said. "It's through an intrastate offering with New York State, which allows us to have a community-owned aspect to the coffee shop. It's similar but not the same as the co-operative model." JAM laid out the details of neighborhood capital campaign here. 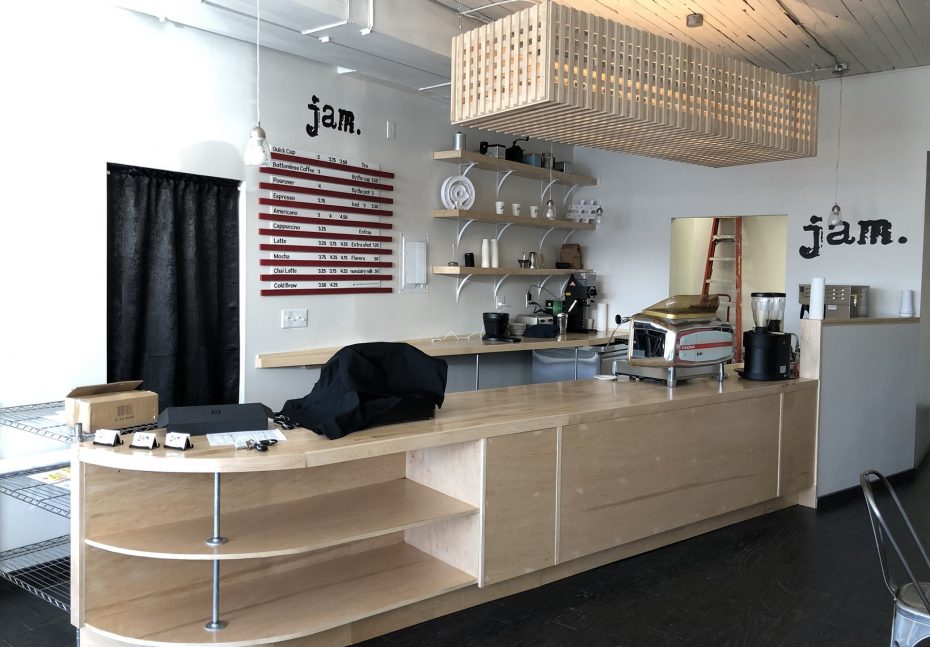 The interior of JAM, at 301 Parkside Ave. (Ben Tsujimoto/Buffalo News)

As shareholders in a for-profit company, investors share profits, receive a discount at the shop and were first to try the flagship coffee. Moreover, the trio of namesake owners/founders plans to give back to the community each year, beginning with a neighborhood cleanup at a date to be determined.

"[JAM] is not my vision and it's not Monica's vision," Small emphasized. "It's what the community wants."

The JAM coffee blend is the cafe's calling card courtesy of Crouse, who also roasts for Tipico Coffee, at 128 Fargo Ave. in the West Side. What's exciting to the owners, and board member Steve Cichon (also a Buffalo News contributor and husband of the owner), is how unpretentious the brew is. 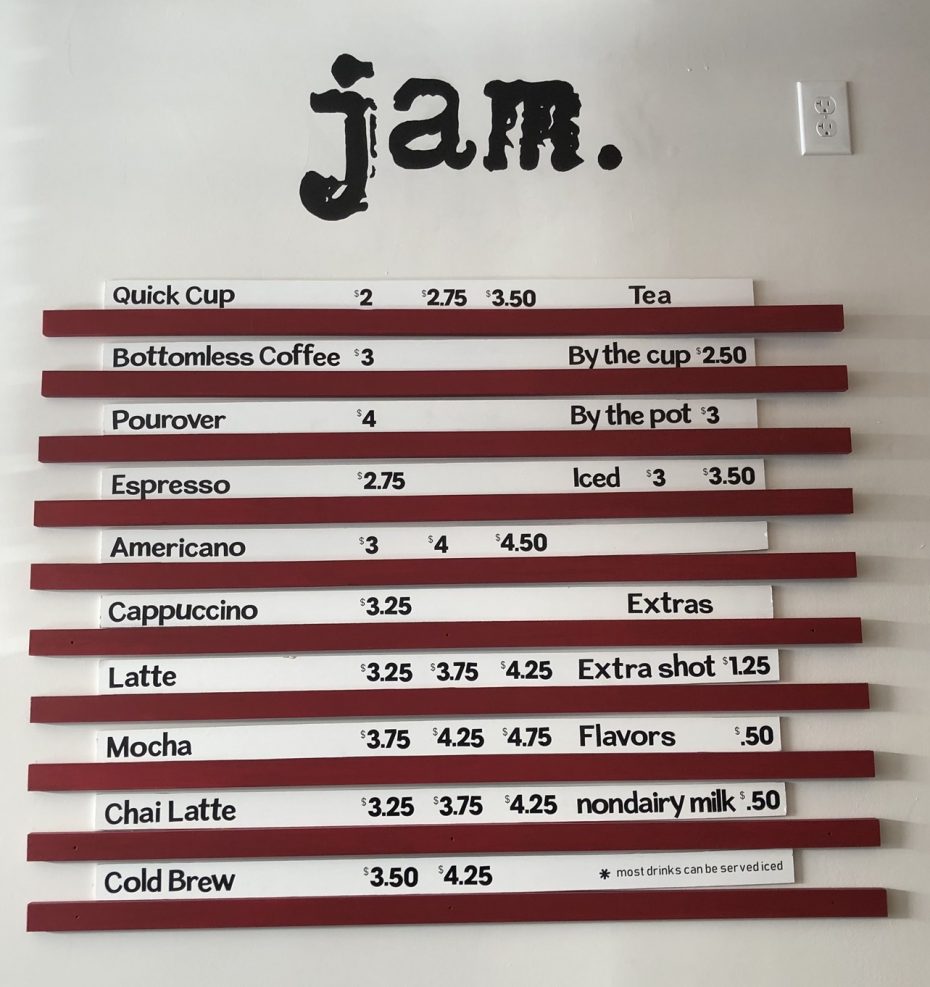 "I'm a drive-through coffee guy. I love coffee. At the high point of my coffee intake, I was probably up to two or three pots per day. I've tried to back off a little bit," prefaced Cichon. "And this is the best kind of drive-through coffee you've ever had - that's what it tastes like to me. You don't taste it and think you've walked into some alternate coffee world. It's just a really good regular coffee."

From a more technical standpoint, Crouse detailed the roast. "It's a blend of southern Colombia and Carmo de Minas Brazil that creates an approachable, honeyed body, lightly tart coffee that's a crowd pleaser," he wrote in a message. The JAM blend will be brewed fresh in the Parkside cafe but will also be available in bags.

The menu was intentionally built simply, Crouse said, and he highlighted one further drink, a classic cappuccino built around Tipico's Coordinates espresso blend and milk from Ithaca Dairy.

The food menu won't be too elaborate, but it will introduce Mundy Cakes, based in Allentown, to a different neighborhood. Owner Amanda Bernardini will prepare both sweet and savory foods for the shop, including spicy corn muffins, filled with a hard-boiled egg, about which Small raves.

Toast and jam, as you might suspect, will also be available, with BreadHive handling the former.

The cafe can seat only 15 people at a time, but it will be open early enough for customers to pop in on the way to work. Hours will be 7 a.m. to 7 p.m. daily.

• In tailoring the building to fit their concept, the JAM owners worked with ReUse Action to create a coffee bar made with reclaimed wood, and more re-purposed materials were part of the restoration of the back area of the shop. Small noted how proud she was of the venture's sustainability.

• Outdoor seating is a goal for the future. There's a surprising amount of street parking on the east side of Parkside, as well as spots on Russell Street, a one-way headed west toward the Buffalo Zoo.

• JAM will offer free Wi-Fi, a must for any modern coffee shop, we'd think. 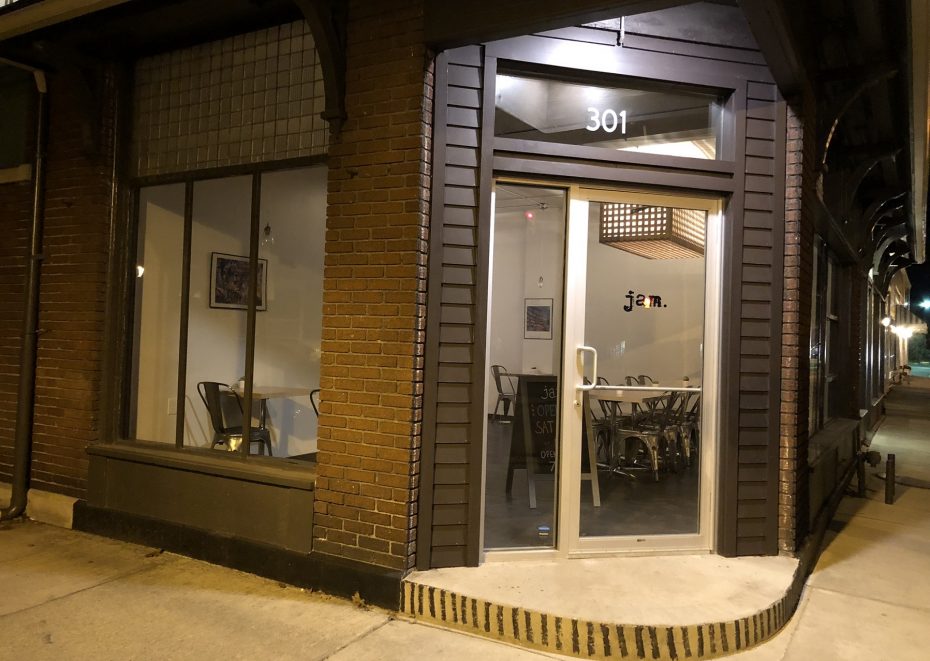 The entrance to JAM Parkside, pictured at the intersection of Russell Street and Parkside. (Ben Tsujimoto/Buffalo News)