A.J. Ricker remembers the drive, the almost manic way Mitch Morse would work at some aspect of his game as an offensive lineman at the University of Missouri.

“He’s going to do it until he gets it right, and he's going to make sure it's right,” Ricker, who was Missouri’s offensive line coach at the time, said by phone. “We all hit obstacles and stuff we struggle at, whatever it is. Mitch is going to – behind the scenes, without anybody knowing it – find a way to get it done. I’ve never seen him unprepared or shocked by anything because he is going to put the work and time into being successful."

When you search for the core of what the Buffalo Bills added to their roster with the most prominent of their many free-agent additions this offseason, that’s what you find.  His approach might not sound a whole lot more exciting than the position Morse plays – center. However, it does offer a true sense of the man whom Bills General Manager Brandon Beane believes will “set an anchor” for the line and the offense in general. Of the man who made his previous coach, Andy Reid of the Kansas City Chiefs, smile at the mere mention of his name. “One of my favorite guys,” Reid said. “I think the Bills are getting a real good football player.”

The Bills once had such a center in Eric Wood before chronic neck issues forced him into an unexpected retirement shortly after the 2017 season. Following unsuccessful attempts at finding a replacement last season, they gave the 26-year-old Morse a four-year, $44.5-million contract earlier this month that made him the NFL’s highest-paid center.

This was not an investment in flash.

“I just like to do my job, man,” Morse told reporters during his introductory news conference at One Bills Drive. “I like to help the quarterback as much as I can, help get the offense going the right way and not be a detriment to the team. That’s just playing hard. It starts with your preparation, and I pride myself every week on my preparation.

“I pride myself on being the best teammate I can be and whether that’s knowing my assignment or just being there helping the guys out. ... I’m not always the biggest guy, but it’s a physical game and I pride myself on being pretty physical inside. There’s always room for improvement. I can be even more physical, but I like finishing toward the ball and I like picking my guys up."

Morse established his value the past four years with the Chiefs, who made him a second-round draft pick in 2015. But the foundation for what allowed him to excel began more than a decade ago, when he was a freshman at St. Michael’s Catholic Academy in Austin, Texas. 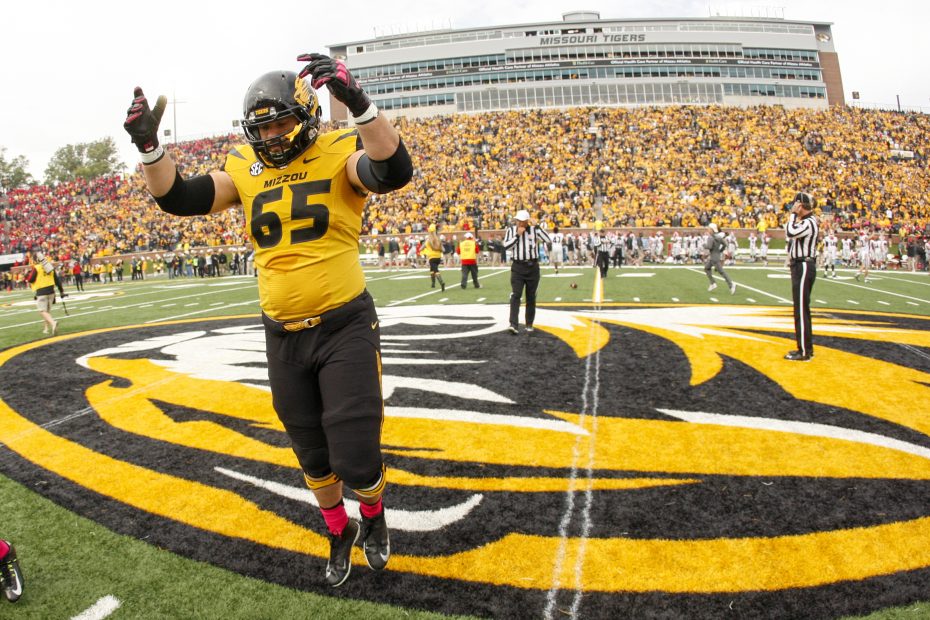 Mitch Morse was a leader for Missouri during his time there. (Kyle Rivas/Getty Images)

Ricker didn’t recruit Morse, but as a Texas native (and Missouri alum) himself he had done plenty of recruiting in the state with particular emphasis on Houston, San Antonio and Austin. St. Michael’s was so obscure on Texas’ legendary high school football landscape, Ricker had never heard of it.

Morse, though, was impossible to miss as a massive physical and athletic presence at a high school with 350 students. Yet he never became full of himself.

Even after signing with Missouri, Morse wanted to get better. A shot-put and discus thrower on the school's state championship track team, he asked the coaches to help him work on his sprints so he could improve his 40-yard dash time before he got to college.

People who knew him then see the same humble Mitch Morse today. He still returns to his high school three or four times a year and works out at the school's tiny weight room when he's visiting his family in Austin.

“He’s so excited by what he’s doing, (saying), ‘Wow! It’s amazing and I can’t believe it,’ ” said St. Michael’s athletic director Angelique Cunningham, who was the track coach when Morse attended the school. “I love that. I’m around a lot of athletes, and they get a chip on their shoulder. Mitch sees it as an amazing opportunity and thinks about how blessed he is. That’s why he continues to work hard. He’s never going to feel like he’s arrived or this is a next step.”

To a large extent, that mindset was what convinced Morse’s agent and former Bills center Bill Conaty that Buffalo would be a great fit for his client. The Bills were one of three teams that bid on Morse’s services, all with comparable offers.

Although Conaty said he did his best to stay neutral, he couldn’t help but give Morse a chamber-of-commerce speech about all that made him fall in love with Western New York during his six seasons (1997-2002) with the Bills.

“To me, even outside the building, it felt like a family atmosphere,” Conaty said. “You go to Ilio DiPaolo's, and you know everyone there. You go to Hutch's, and you know the folks there. And they're very supportive. Anyone around town knows who the Bills are. I played in Minnesota, and the stadium was a half-hour from the actual facility and you're just some big dude walking around. They don't know who you are.

“But when everyone lives right near Orchard Park or in the city, everyone kind of recognizes you in a good way. You're not a small fish in a big pond. You're a big fish in a smaller pond in a positive way.”

Ricker, who in January became O-line coach at SMU, watched Morse’s football knowledge grow considerably through the player’s final two years at Missouri, where Morse spent time at both tackle spots as well as center. Before Ricker joined the Tigers’ coaching staff in 2014, the team ran a spread offense whose simplicity didn’t require linemen to have a detailed understanding of defensive fronts.

That changed when Missouri shifted to a pro-style attack, which involves far more adjusting to the defense’s alignment. Offensive linemen must be able to identify what they’re seeing and know the corresponding blocking assignments.

“I remember him coming back after the Combine, and he said, ‘Coach, I can’t thank you enough for what you did,” Ricker said. “I said, ‘What do you mean?’ He said, ‘Coach, if you wouldn’t have gone over defenses or how people call them, I’d have been in trouble. My first interview, they got me on the board and they said, 'OK, draw your favorite run play up versus an over-split defense. And if I wouldn't have known that … you know my mental makeup.' He would have been a mess, because he's such a perfectionist. It's kind of funny, but just by his knowing that, he was able to kill it.”

Of course, if Morse didn’t have the physical gifts necessary to be a top-flight player – a 6-foot-6, 305-pound frame and an abundance of power that allows him to consistently stand his ground against interior pass-rushers – all of the drive and intelligence in the world wouldn’t make much difference. 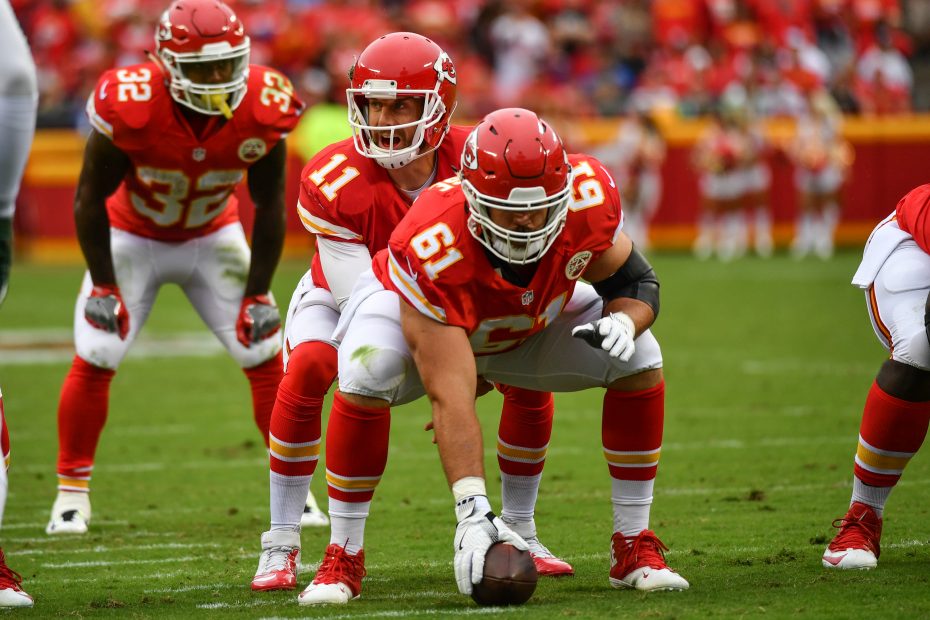 The Bills’ top priority was to dramatically improve the integrity of the front of Josh Allen’s pocket, whose leakiness during his rookie season last year contributed to some of his considerable scrambling. Pockets that collapse from the front are problematic for all quarterbacks, but can be especially troubling for an inexperienced one who would be prone to panic his way into a bad decision.

“With the re-signing with Eric Wood (before the ’17 season), I really knew where we were going to be in transition at quarterback and probably bringing a young guy in,” Beane said. “And that was what was so crushing about Eric's situation was to lose him, knowing we were about to put a high resource in a quarterback. We did the best we could and the guys played hard last year, but we just felt like Mitch brought a stabilizing force and would be an upgrade at the position.

“The word I would use (to describe the way he plays) is firm. He's very firm, he doesn't give a lot of ground. There's two types. You've got the guys who are athletic, who are going to use angles and wall off guys, and then maybe they don't anchor as well. Mitch is a bigger guy who really can set an anchor. He's similar to Wood in that way. So that, I thought, was important.”

It was important to the Chiefs, too, as was what Morse has above his shoulder pads.

“There's a mental part of it and he's sharp,” Reid, the Chiefs coach, said. “He's a smart kid, he's a hard worker, he's got good feet and likes to play the game. Listen, he played (almost) every (O-line) position at Missouri, so we narrowed it down for him just to play that center spot. And I don't think he's tapped out. I think he'll continue to get better the more he plays there.”

Ricker agrees. Morse left a lasting impression on him. Ricker is certain he’ll do the same with the Bills.

“I haven’t coached many like Mitch, honestly, that have been as driven as he is and have his work ethic and wanted to be a perfectionist,” the coach said. “You'll get some guys that show flashes of it, but to be that way day in and day out, that's who he is.”