It’s 6 p.m. on a recent Friday at Buffalo RiverWorks, one hour before the Saucies take on the Alley Kats in the fifth game of the 2019 Queen City Roller Girls season. Things are reasonably quiet — for now. The will-call line is light, the concession queue is nonexistent, the merchandise stand is uncrowded. David Bowie’s “Fame” is barely audible in the background.

Players can be seen entering RiverWorks, backpacks and skates slung over shoulders. Referees in striped shirts and dark helmets are milling about while a few fans choose their seats. The flat roller derby track is empty underneath the enormous ceiling fan, and glistens brightly as sunshine streams through the windows.

At 7 p.m., RiverWorks erupts with energy. The stands are packed now with fans of all ages, from toddlers and tweens to college students and seniors. Some are dressed for the occasion. A father and daughter wear matching Shevel Knievel T-shirts and an Alley Kats devotee is made up as a whiskered cat.

An announcer reads the lineups — player-chosen names include karsmashian (with a lower-case “k”) and Mick Dagger — as skaters on the red-and-yellow-clad Saucies and the green-and-purple-attired Alley Kats fly around the track. 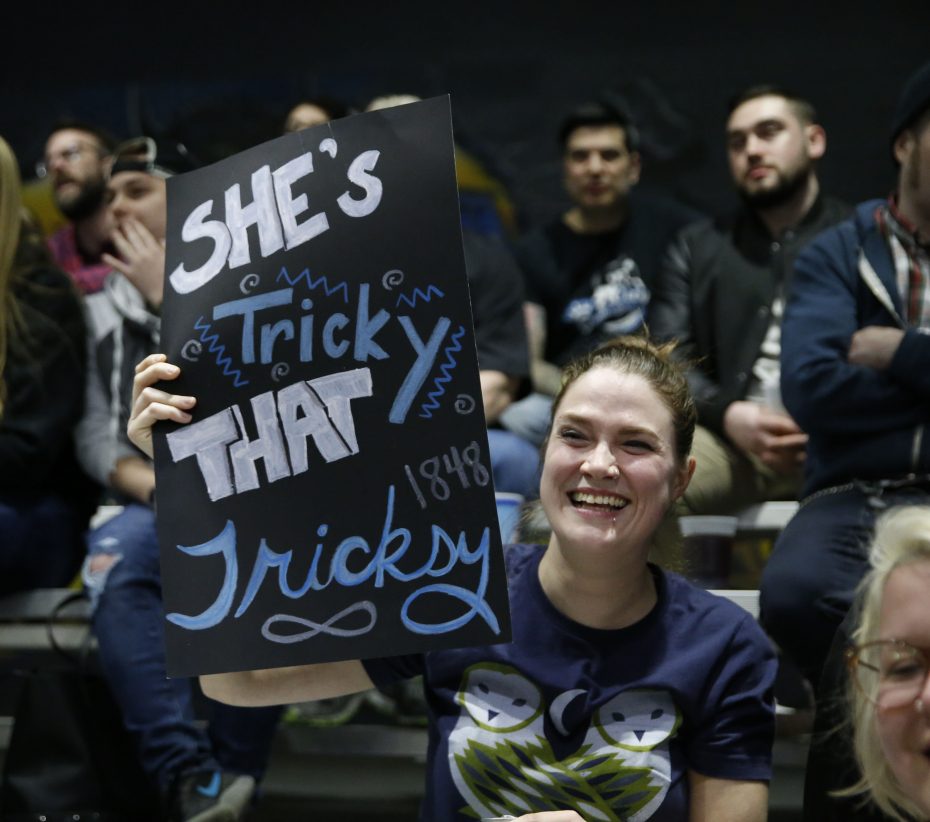 Brian Barrows became an Alley Kats die-hard after reading about the league. He was struck by the seriousness of its athletes, as well as its charitable efforts. “The first match I went to was last season, between the Alley Kats and Devil Dollies,” Barrows said. “I was completely won over by how players support and encourage each other like an extended family. Little did I know that I'd become a big fan so quickly. Win or lose, I'm a Kats fan for life.”

For many locally, winter and spring Fridays (and occasional Saturdays) mean roller derby at RiverWorks. Now in its 13th season, the league is comprised of three home teams (the Alley Kats, the Devil Dollies, and the Saucies), a top-25 ranked travel team (the Lake Effect Furies), a travel “B” team (the Subzero Sirens), and a juniors league for ages 11 to 17.

QCRG has earned magazine covers, name recognition and a devoted following. It is a member of the WFTDA (Women’s Flat Track Derby Association), an international governing body of women’s flat track roller derby representing more than 450 member and apprentice leagues. On May 11, QCRG reaches a milestone, as the Furies play the team’s 100th sanctioned game (these are games that count toward the team’s international ranking).

“It’s a dream come true,” said QCRG co-founder Debra Hughes, a player-turned-referee who goes by the name Sissy Fit. For the players and league enthusiasts, there is nothing in Buffalo quite like the QCRG experience. 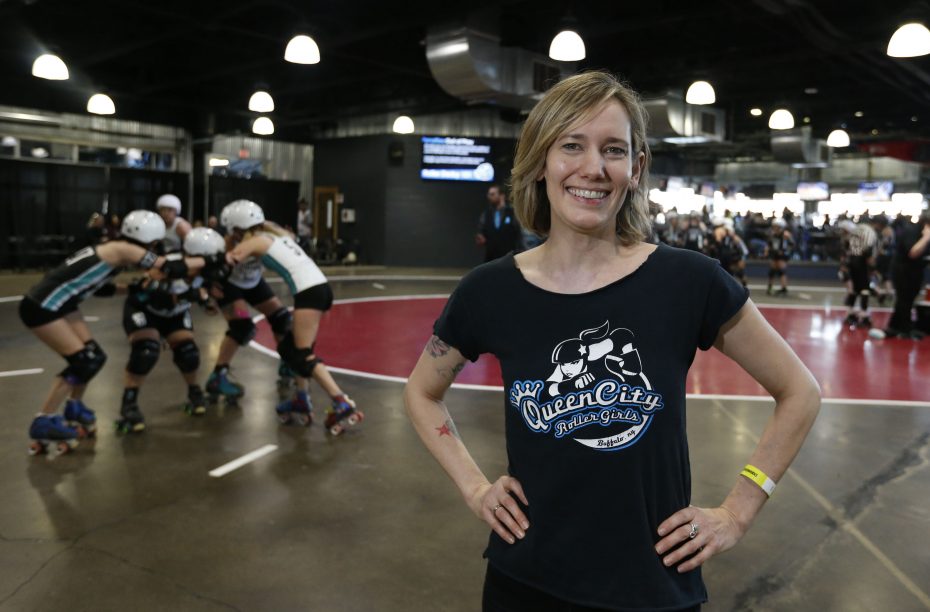 Debra Hughes, co-founder of Queen City Roller Girls, is referee and former player. She has passed her passion for the sport along to her two daughters, who now play. (Sharon Cantillon/Buffalo News)

'It just kept taking off'

It all started for Hughes in 2006 with an A&E TV show called “Rollergirls.”

“I turned it on and I was blown away,” Hughes said. “I knew it would be something unique for Buffalo, and for women especially.”

The next step — after Hughes learned how to skate — was grassroots player recruitment. Then, after contacting local rinks, she received an OK from Rainbow Rink in North Tonawanda.

Those early days stand out for many of the athletes. Current Lake Effect Furies’ blocker Danielle Thomas — a.k.a., Pepper Stix — said Rainbow Rink “had an intimate feel. It was a little DIY, and exciting in that way. Everybody was packed in close, and it was so loud.”

The popularity of the league at Rainbow Rink meant a larger space was eventually needed.

“It just kept taking off. People used to ask me what my dream for the league was, and I would say, ‘To be downtown by the waterfront,’ ” Hughes said. “Fortunately, Buffalo RiverWorks approached us and wanted to build a track specifically for the league.”

QCRG began playing at RiverWorks in 2015, and was the first roller derby league in the nation to have its own specifically constructed venue. RiverWorks offered stadium-style bleacher seating for thousands, VIP tables, dedicated locker rooms and a permanent track.

Although QCRG continues to grow in size and popularity, there remains many misconceptions about the sport, especially among those familiar with old-school roller derby.

“It gets compared to wrestling a lot, and the roller derby people watched on TV in the 1970s,” Hughes said. “But it’s so different now. There were no rules back then, and they didn’t even wear helmets. It’s a more strategic game than ever before.”

The league teaches the rules during games and volunteer ushers help explain the intricacies. Furies co-coach Crystal Muzacz (Bricks Hit-House) said an understanding of the sport has greatly increased in Buffalo, and so has its level of respect.

“It is not staged, and we’re not trying to murder each other,” she said. “We work hard and we train so that we don’t hurt each other. We take care of our bodies, and take care of each other on the track.”

There is no doubting the physicality of the sport, though. Furies blocker Lauren Tingco (Chickadeemolish) said toughness is essential. “You have to be able to take a hit, and that’s not easy to do,” she said. “There are a lot of injuries; you get beat up.”

However, Muzacz said, “it’s not all about the giant hits. When they happen, they look cool. But it’s not just about that. It’s also about protecting each other.” 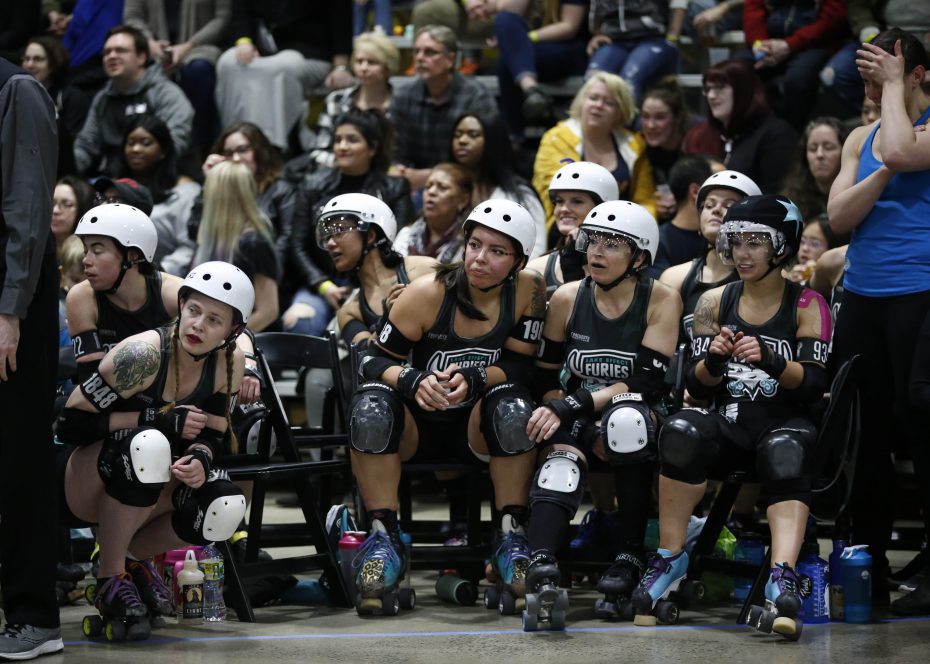 Teammates on Lake Effect Furies watch the action of a recent game against the Detroit Roller Derby at Buffalo RiverWorks. (Sharon Cantillon/Buffalo News)

Tingco said she is constantly struck by the diversity of QCRG athletes — the size differences, the disparate life experiences, the range of careers. In fact, she said  she doesn’t know everyone’s “human names — I only know their derby names.” But all are united by a love of the sport, and a respect for each other as athletes.

Lauren Pszonak, QCRG’s head of public relations and a league referee (Kylau Ren), said one element that makes the league so special is its inclusivity. “It is such a close community. And we accept all skaters equally — trans, gender non-conforming, queer. There is so much trust that you'll always be accepted.”

Hughes calls it a “one-league, one-team mentality. We’re all in it to see roller derby grow and become something bigger,” she said. “It’s a sisterhood. The league is like my chosen family.”

The skaters are not paid. Rather, Thomas said, “everybody is doing it because they love it.” She said the sport requires real time and dedication. It also requires support from spouses, significant others and children.

“It takes over, because you’re skating several days a week, training, reviewing footage, helping out at fundraisers,” Thomas said. “There are times when I run into the house, grab food, leave a mess, and then I’m off to practice. But my husband has done everything he can to support me, because he sees how happy it makes me.”

Hughes’s two daughters fell for the sport while watching their mother skate as Sissy Fit. Known as Veggy Cowgirl and Jiffy Pop, both play for the Furies, making the travel team’s upcoming 100th sanctioned game especially meaningful for the family. “When I stopped skating I felt like I kind of handed it over to them,” Hughes said. “It’s great I can still be a part of it. And they’re good, too.”

Pszonak said the entire league is taking pride in the Furies’ milestone. “The 100th game is huge,” she said. “It means QCRG has stood the test of time, and is still growing. Everyone involved is celebrating the Furies’ achievement as friends and as league-mates.”

That unique closeness and sense of camaraderie is something the players and coaches want to ensure never fades, even as the league increases in popularity. “I’d like to see it grow but not lose the women-owned and women-run aspect of it,” Hughes said.

Above all else, Muzacz said, QCRG is for its players and coaches — and it always will be.

“This sport is for us,” she said. “It’s great that we get to share it with so many people; we love our fans, and we love everybody that comes out to support us. But for the players, it’s our community. It’s a huge support system, and it’s a big family.” 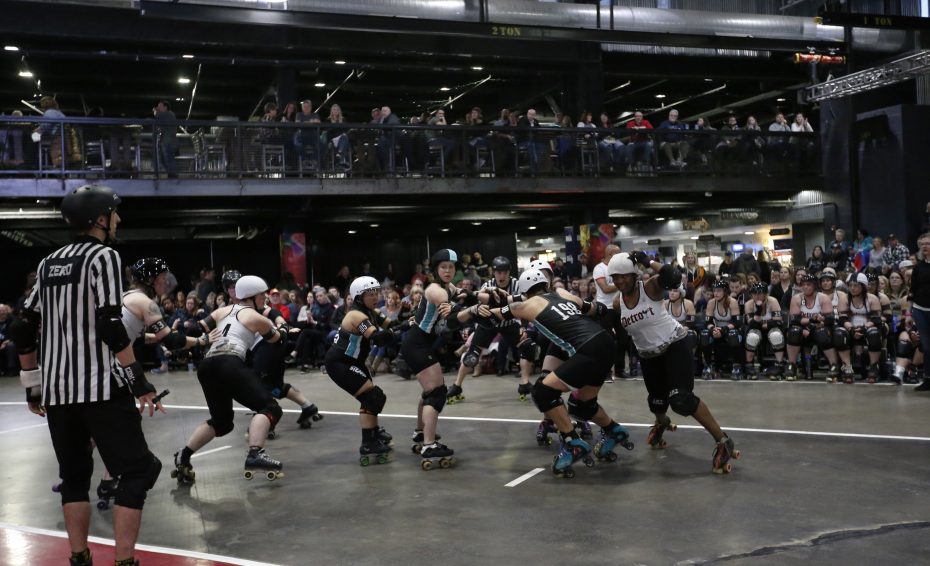 Buffalo RiverWorks made a track specifically for Queen City Roller Girls. Fans can watch from the floor or the balcony. (Sharon Cantillon/Buffalo News)

Home games are played at Buffalo RiverWorks, 359 Ganson St. Tickets are $15 general admission, $12 for students and military, $5 for ages under 12. VIP tables are also available. Doors and will call open one hour before the event. Riverworks has multiple bars, a restaurant and a second-level mezzanine overlooking the roller derby track. For info, visit buffaloriverworks.com and qcrg.net.