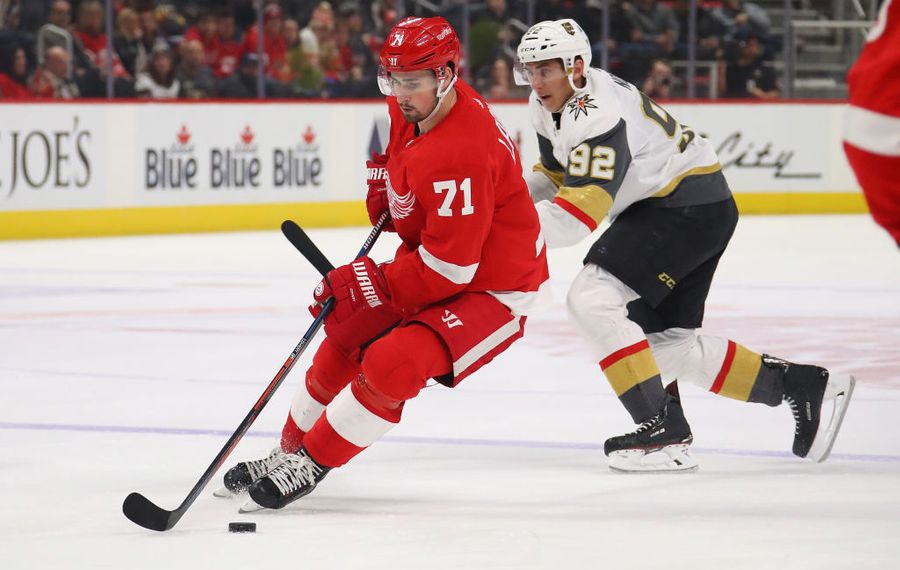 Only six games remain in another nonplayoff season for the Buffalo Sabres. At this point, they are playing for pride and are building towards next season.

Three recent call-ups from Rochester will be on the ice when the Sabres face the Detroit Red Wings tonight at 7 p.m., and two of the team's regular defensemen are out of the lineup: Zach Bogosian and Rasmus Ristolainen. With a 4-0 loss in Ottawa on Tuesday night, Buffalo (31-36-9) owns the league's worst record since it was atop the NHL on Nov. 28, and its players are searching for a solution.

The Red Wings (28-38-10), on the other hand, are playing some of their best hockey of the season. Both teams are sure to be in attendance when the NHL Draft Lottery is held next month.

Here are Five Things to Know about tonight's game:

1. Lineup: Bogosian (lower body), Matt Hunwick (upper body) and Ristolainen (illness) won't be available to play against the Red Wings. Center Evan Rodrigues (upper body) is also day to day after taking a big hit Tuesday in New Jersey. As a result, Lawrence Pilut and Will Borgen will again be in the lineup.

Additionally, the Sabres sent winger Tage Thompson to Rochester and recalled winger Victor Olofsson, who will skate on the top line with Jack Eichel and Sam Reinhart tonight. During the morning skate, Jeff Skinner was joined with Casey Mittelstadt and Jason Pominville on the second line, while Alex Nylander was on the third with Vladimir Sobotka.

Forward Scott Wilson will be the Sabres' healthy scratch, and Linus Ullmark (17-23-5, 2.98, .909) is receiving his second start in three games. Below is how the team lined up during Thursday's morning skate:

2. Olofsson's debut: Olofsson, a 23-year-old winger, had a team-high 60 points, including 27 goals, in 64 games with the Amerks. The former seventh-round draft pick also scored 27 goals as a teammate of Rasmus Dahlin with Frolunda HC of the Swedish Hockey League last season.

In addition to the offensive production in Rochester, the Sabres are encouraged by Olofsson's defensive play. He played on the penalty kill with the Amerks and improved his two-way game enough to earn their trust.

"Obviously we want to give these guys some games and Olofsson has certainly earned it," Housley said Thursday morning. "His development has been great this year. Not only is he doing really well on the power play, he's playing a 200-foot game. He's really responsible and plays on the penalty kill as well. His wall play is good. Obviously his shot is incredible. Just looking at it this morning, it was great to see a shooter have a shooter mentality."

Olofsson will also get an opportunity to skate with the Sabres' top power-play unit, joining Eichel, Skinner, Reinhart and Dahlin. The team's 18-year-old defenseman gave a telling response when asked about the shot that helped Olofsson get his first NHL opportunity.

3. Rolling Red Wings: Detroit enters the game 15th in the Eastern Conference with 66 points, yet it has won four of its last five games, including back-to-back road victories at Vegas and San Jose. The Red Wings have mounted five separate winning streaks since December, while the Sabres have not won back-to-back games since Dec. 13.

4. A response: The Sabres have won only three of their last 20 games and have been shut out in four of their last nine. They had 46 shots on goal in a 3-1 loss in New Jersey on Monday, only to lose 4-0 to the Ottawa Senators on the second night of a back-to-back.

The performance led to Eichel and Kyle Okposo calling for more change, with the latter mentioning "accountability" as one of the team's issues. The team's only goal during the two-game road trip was Reinhart's dump-in from behind the red line.

This is the third of four meetings between the two teams this season, and Buffalo won the first two, including a 3-1 win in KeyBank Center on Feb. 9.

"We can't go and say we haven't generated opportunities," Pominville said. "We've had looks to score. We just can't find a way to score right now. ... We just haven't been able to do it. We've got to play good at home. That's all we need to worry about. Finish on a good note at home. The fans have been good to us, even though it's been tough."

5. By the Numbers: Eichel has eight points in eight games against Detroit since the beginning of the 2016-17 season. ... The Sabres have killed 25 of 27 penalties against the Red Wings over their last seven games dating back to March 20, 2017, and have won seven of the last 10 meetings since the beginning of the 2016-17 season. ... This is the 104th game between the two teams and Buffalo leads the series, 64-57-13-5. Jason Pominville has a team-high 14 career points against Detroit.