The recent weekender at the Erie County Holding Center held her hands about a foot apart.

But that’s not the only horror she said greets incoming inmates.

"The toilets are filled with feces, urine" that newcomers often have to clean up themselves, she said.

The water in some taps comes out yellow or doesn’t come out at all, and getting required medication is a constant challenge.

And for females, there’s one more indignity: Male deputies walking past the cells while women use the toilet. The guards are supposed to call out "Man on the walk" when they’re approaching, she said, but rarely do. Instead, they make comments to the women caught in the most revealing positions.

Stacked against the suicides and near-deaths that made Sheriff Tim Howard’s jails the targets of both lawsuits and state and federal intervention, the daily filth and rodents may not seem like much. 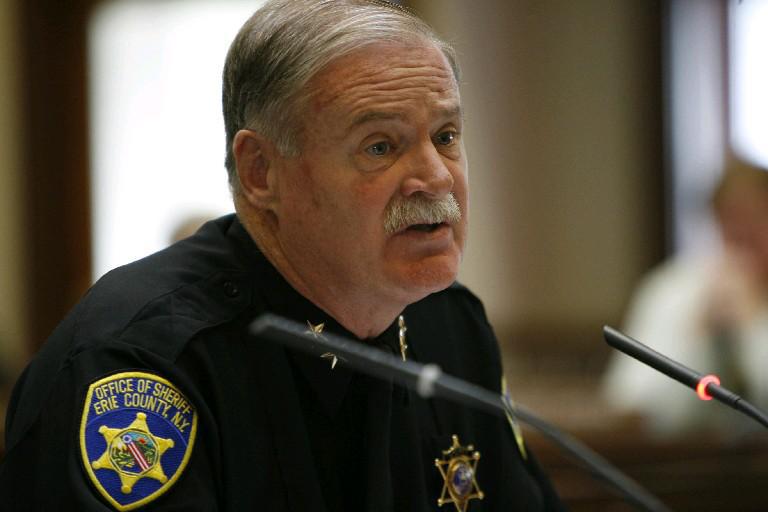 But while most believe they and their loved ones will never be murderers, rapists or drug dealers – and therefore don’t have to care about conditions in the Holding Center – lots of us have had too much to drink at some point and gotten behind the wheel.

That means most of us could find ourselves in the jumpsuit of this 40-something Orchard Park woman whose DWI crash with injuries earned her 12 weekends in Hotel Howard.

"It will never be forgotten," she said. "The first weekend, I came home crying. I said, ‘I’m not going back.’ "

Obviously, that’s the effect we want jail to have – but not for these reasons. These aren't the conditions any of us would want to be subjected to, or have a loved one subjected to. The punishment is supposed to be loss of freedom, not a horror house of filth and vermin.

"Rats are not an issue," said John Greenan, Howard’s administrative chief, noting the office hires an exterminator – as he also noted last spring when The Buffalo News did a story after a giant rat was killed and photographed being held up by a kitchen worker.

As for males guarding females, Greenan said it happens and that females also guard males.

"We try, whenever possible, to have females on the units," he said. But that is not always possible in jails because of the bidding for assignments among employees.

But he took issue with the claims of yellow tap water and filthy toilets, citing the oversight provided by both the state Commission of Correction and the federal Department of Justice.

"We have always gotten a clean bill of health," he said.

So who to believe?

Hint: This is a department with a history of obstruction, denial and obfuscation. Remember "individual inmate disturbances," the term used to hide suicide attempts so the incidents wouldn’t have to be reported?

That history means I’m putting my money on the former weekender, whose account jibes with the letter from a current inmate she befriended who also complains of "rats roaming cells, eating our food in our bins" and who wrote "cells are not cleaned out when inmates leave (between inmates). We go into dirty cells where previous inmates have sweated, pooped, vomited, pee."

The former weekender said she contacted the county Health Department. However, officials there say they only have responsibility for the food service operation and that the rest of the facility is overseen by the state COC. A county inspection Feb. 21 listed only four violations, ranging from an unlabeled spray bottle to a garbage tote in disrepair; all were listed as remedied on a March 7 re-inspection. Neither inspection mentioned rats.

But, then, neither did one in February 2018 – just months before the photo of the giant rodent was obtained by The News and sent to the Health Department.

The weekender said the rodents were ignored during her stint until one got up close and personal with a deputy.

"The rat ran over her foot; you hear her screaming, crying; she calls on the phone. The next day there are traps," she said.

But rodents weren’t the only issues.

She was afraid of what she might catch from sleeping on the cot and bedding packet with "one rolled up awful wool blanket that you just hope to God it's been washed." In one cell, she said, a corner of the mattress was in the filthy toilet, but instead of giving her a new one they told her to just clean it.

"I refused to shower in there, it’s disgusting," said the woman, an asthmatic.

"There were certain nights I didn’t get my inhaler," she said, citing a problem The News has previously documented but which doesn’t appear to have been solved.

The Orchard Park woman, who did not want her name used because of the obvious impact on job opportunities, completed her last weekend Feb. 24. She easily could have walked out and tried to put the whole ordeal behind her after getting an education about life on the streets from the other women – the shootings, the drugs, the prostitution and the view of jail time as "three hots and a cot."

But she didn’t forget about it – she couldn’t.

"I don’t care if you’re a murderer or not, these people have rights," she said, describing a jail staff that seems "trained to ignore people."

She breaks down when talking about the women still in there, and wonders if her lone voice can make a difference.

"I felt so bad for these girls," she says. "It’s their fault, but the way they’re treated and the conditions they have to live in ..."

They are the conditions we pay for as taxpayers – and that we tolerate because we think we’ll never be a hardened criminal who ends up there. And we’re probably right.

But a DWI weekender? Maybe we should think again whether we, as a society, are really OK with Hotel Howard.