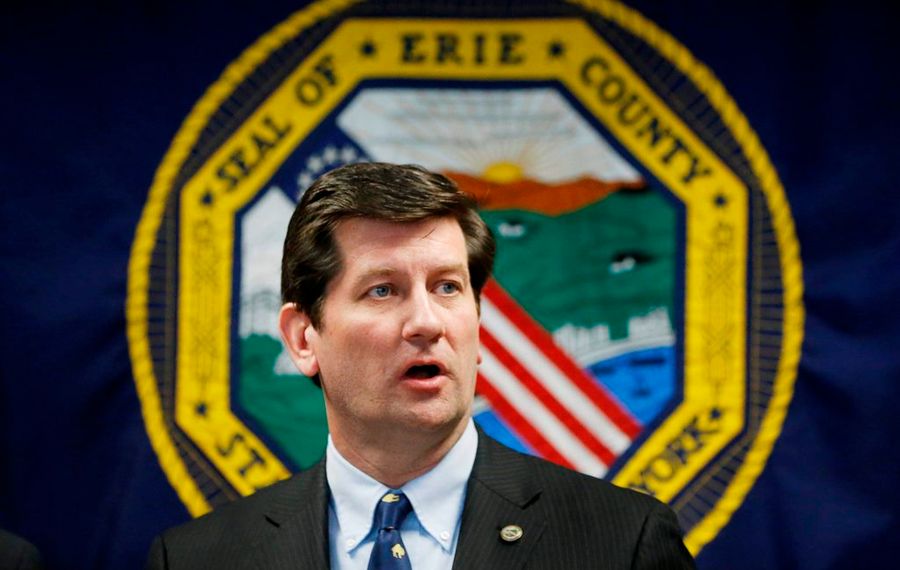 Erie County's Office of Weights and Measures is responsible for making sure you're not getting ripped off when you buy a pound of hamburger at the supermarket or purchase a mispriced item at the department store. The office represents the county's key consumer protection arm.

Now, County Executive Mark Poloncarz wants to restructure and rebrand the Office of Weights and Measures as Erie County's new Office of Consumer Protection. The new office is one of two key consumer protection proposals he's officially rolling out during his State of the County address this afternoon at the Albright-Knox Art Gallery.

"We’re seeing an increase in abuse or attempts at consumer fraud," he said, referring to credit card skimming scams.

In a related consumer protection measure, Poloncarz wants to require stand-alone ATMs that are unaffiliated with a bank – like the kind found in bars, bowling alleys and convenience stores – to be registered with the county, for a fee. That way, he said, if an ATM customer discovers they've been defrauded by an unsafe ATM, the county has a way to track down the culprits.

"The owner could be some syndicate in China," Poloncarz said.

Both proposals would require County Legislature approval and could generate substantial county revenue through new fees and fines. The proposed Office of Consumer Protection would move from under the Department of Public Works to the Office of Public Advocacy and require hiring a new director.

With the exception of the U.S. Postal Service, the Office of Weights and Measures regulates the scales for almost every commercial purpose where consumer money is at stake – from the kind found at grocery stores and package delivery services, to the kind that weighs luggage at the airport and trucks on the road.

The office also inspects the integrity of gas pumps and ensures that county retailers comply with local consumer pricing laws, charging fines and penalties if the prices for store items are not clearly and accurately marked.

In some other counties, all this work falls under an umbrella consumer protection office, like what Poloncarz is proposing.

Weights and Measures made news this past fall when county inspectors assisted the U.S. Secret Service and Amherst Police in uncovering a gas pump credit card skimming scam that affected customers at several suburban gas stations whose stolen credit card information was used to rack up thousands of dollars of purchases.

But inspector Greg Reusch said the office regularly assesses fines on businesses for noncriminal infractions. Last month, for instance, two affiliated supermarkets sold overpriced sponge candy to consumers. The candy was sold by weight, and in such cases, the weight of the container cannot count toward the product's price.

In this case, the sponge candy was relatively light in comparison to their cardboard containers. The box weight was not subtracted from the weight of the actual product, resulting in buyers paying for less candy than listed on the label. The stores racked up fines totaling more than $1,200, he said.

More often, however, it's the inspectors who are testing the marked pricing of retail items who find mistakes that result in fines. Under county law, all items must have a physical price tag unless they pay for a county waiver that allows them to group unpriced items under pricing signs, Reusch said.

Between inspection and waiver fees, as well as fines, the Office of Weights and Measures brought in more than $586,000 in revenue in 2018, he said.

Poloncarz said he would like to raise the profile of the Office of Weights and Measures as consumer fraud becomes a greater concern.

Potential critics may note that other consumer protection organizations already exist, including the state Attorney General's Bureau of Consumer Frauds and Protection, and the Federal Trade Commission's Bureau of Consumer Protection. It's also likely that some county legislators may question the need to hire another county administrator for a department that is otherwise continuing to do the work it has always done.

Poloncarz said other consumer agencies do not do the work that the Office of Weights and Measures does, and that a new director can better oversee all consumer protection work and serve as a liaison with other local, state and federal agencies doing similar work. A beefed-up office could also provide better information to the public, he said.

As part of his consumer advocacy efforts, Poloncarz wants independent ATMs to be registered with the county because those who withdraw money from those machines are at far greater risk for being scammed than those who use ATMs that are not owned by a FDIC-insured consumer bank within Erie County.

The county would charge such ATM owners $100 the first year they register an ATM and $50 in subsequent years.

"Let’s address this issue before it really hits us head on," Poloncarz said.

Matthew O’Neill, a Secret Service supervisory special agent who oversees criminal investigations out of Washington, D.C., said stand-alone ATMs are particularly vulnerable to money laundering and credit card theft because they have fewer security features and often no video cameras. Though direct theft of a consumer's money by an ATM owner isn't a problem, he said, other criminals can launder money through these ATMs or attach credit and debit card skimmers to steal from consumers, he said.

In addition, the Secret Service recently rounded up 18 people responsible for "ATM jackpotting," where criminals break into a stand-alone ATM and corrupt or replace its hard drive so the ATM is reprogrammed to spit out all its money. Of 126 jackpotting attempts uncovered by the Secret Service across two dozen states, O'Neill said, 20 were in New York.

Poloncarz said that by requiring nonbank ATM owners to register, if a consumer reports being defrauded by one of these machines, the county has a solid way to help law enforcement investigate. The ATM registry work would become part of the new responsibilities of the Office of Consumer Protection.