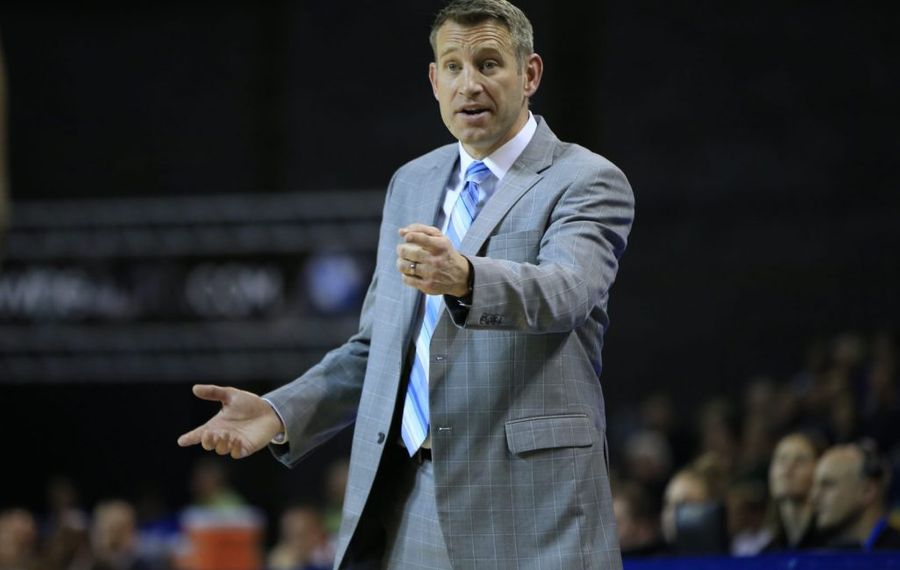 Less than two weeks after signing a contract that would keep him as head coach of the University at Buffalo men's basketball coach for the next five years, Nate Oats has instead left the program.

The UB athletic department announced Wednesday that Oats resigned as men's basketball coach, and has accepted the same job at Alabama. Alabama also confirmed the hire in a release Wednesday.

Oats did not return a call from The News following the announcement of his departure. AL.com reported Wednesday that Alabama will introduce Oats at 2 p.m. EST Thursday.

“I want to thank the UB administration for helping us elevate Buffalo into one of the premier mid-major programs in the country,” Oats said in a statement regarding his departure, released by UB Wednesday afternoon. “The support we have received from the Western New York community during the good times and the bad times has been nothing short of amazing. This community has made Buffalo feel like home for Crystal and my family over the last six years.”

Oats' resignation and move to Alabama comes three days after UB's season ended in the second round of the NCAA Tournament. A source told The News that Oats was on campus Wednesday morning at UB and attended an athletic department meeting.

"We're shocked by how quick and quiet this was," the source said.

Another source told The News that the athletic department informed the basketball players of Oats' departure during a 4 p.m. meeting on campus.

UB lost to Texas Tech, 78-58, in an NCAA Tournament game Sunday at the BOK Center in Tulsa, Okla.

Oats, 44, is a native of Wisconsin who replaced Bobby Hurley as UB's coach in April of 2015. Oats worked as an assistant under Hurley in 2013-14 and 2014-15, the first year UB won the Mid-American Conference Tournament and earned its first berth in the NCAA Tournament.

Oats' departure comes after he signed a contract extension that made him the highest-paid men's basketball coach in the MAC and that would have kept him at UB through March 31, 2024. Oats was scheduled to earn a base salary of $837,000 a year, including $225,000 that would be raised through gifts designated to the men's basketball program.

“Here’s what it does for me,” Oats said of the extension on March 14 in Cleveland. “I can concentrate on coaching games. I don’t have to worry about the rest of things. I tell (agent Rick Smith), ‘Just tell everybody, no thanks, unless it’s something unreal.' Let’s just concentrate on this season, let’s concentrate on continuing to recruit for next year, we’ve got a really strong class, and let’s keep this thing building.”

In 2018, Oats was the fourth-highest paid employee in the State University of New York system based on state payroll data collected by SeeThroughNY.

“I wish Nate the very best and we’re thankful for everything he has done to elevate our men’s basketball program,” UB athletic director Mark Alnutt said in a statement. “An opportunity like this is life changing for Nate and his family.

"Thanks to Nate and the team’s success, the Buffalo coaching position will be extremely attractive, and a national search is already underway. It will be conducted as quickly and as thoroughly as possible. We wish Nate and his family all the best.”

The UB athletic department said in a statement that Jim Whitesell, an assistant on Oats' staff, will serve as the Bulls' interim head coach during its search.

Who's up next at UB? Potential replacements for Nate Oats

Had Oats returned to UB for 2019-2020, he would have coached a team that graduates three of its starters in guards CJ Massinburg and Jeremy Harris, and forward Montell McRae. The Bulls also will graduate forward Nick Perkins, a three-time MAC Sixth Man of the Year, and guard Dontay Caruthers, a two-time MAC Defensive Player of the Year.

Prior to the announcement of Oats' departure, four recruits were expected to join the Bulls in 2019: Noah Williams, a 6-foot-3-inch guard from Seattle, and three junior-college players: Andre Allen, a forward from Arizona Western College; Durey Cadwell, a guard from Daytona (Fla.) State College; and James Rojas, a forward from Hutchinson (Kan.) Community College.

UB has not announced whether it will release any of its signees from their national letters of intent.

At Alabama, Oats replaces Avery Johnson, whose departure was announced Sunday. He had a 75-62 record in four seasons at the school, including 18-16 this season.

“I have been watching Coach Oats for the last few years as he has led the University at Buffalo to unprecedented heights," Alabama Athletic Director Greg Byrne said in a news release Wednesday. "His commitment to developing the student-athlete both on and off the court was what really stuck out. As we spoke to some of the best college and pro basketball minds in the country, his name came up time and time again. Coach Oats will hit the ground running starting tonight, and we look forward to him having a long and successful career with the Alabama Crimson Tide.”

Some of Byrne's familiarity with Oats could be tied to the fact that Byrne is the former athletic director at Arizona, the team that UB upset in the first round of the NCAA Tournament in 2018. Byrne had been hired by Alabama 14 months earlier.

"Coach Oats has an impressive background," University of Alabama President Dr. Stuart Bell said in a news release. "He is exactly what we were looking for in this search. I'm excited about the future of Alabama basketball, and I know our fans are as well."

In August, Oats and his wife paid $999,900 to buy a six-bedroom Tudor-style waterfront home on Grand Island's Gold Coast, on the Niagara River facing Canada. Take a look inside the house he described as their "dream home."