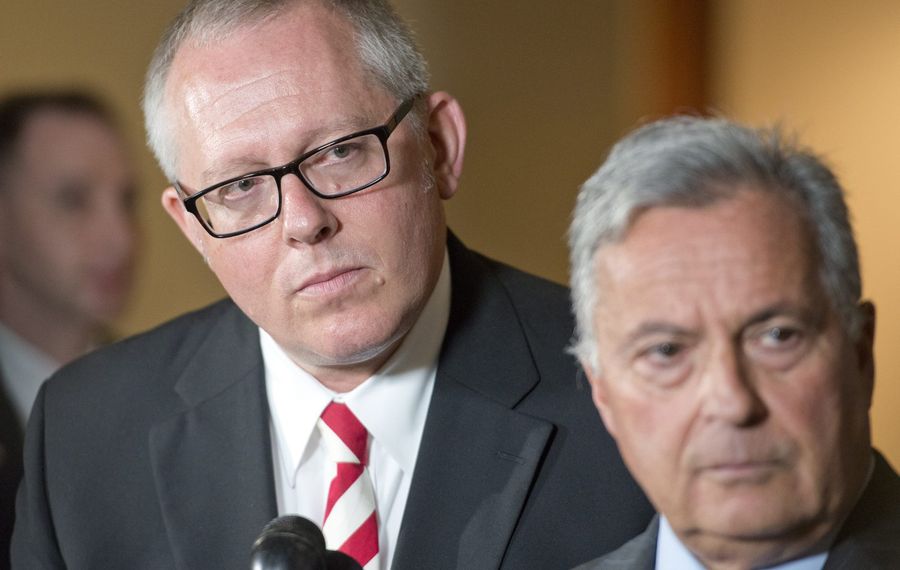 Or, to be more specific, it sounded like vindication.

Both Caputo – an East Aurora Republican consultant caught in the sticky fringes of the sprawling Mueller investigation – and his lawyer said Tuesday that Barr's letter makes clear what they have been saying all along: that Caputo didn't break the law in any way when he worked for the Donald Trump presidential campaign in 2015 and 2016.

Caputo and his lawyer, Dennis C. Vacco, say that because of two key sentences in Barr's letter. One reads: "The Special Counsel’s investigation did not find that the Trump campaign or anyone associated with it conspired or coordinated with Russia in its efforts to influence the 2016 U.S. presidential election."

And the other reads: "The report does not recommend any further indictments, nor did the Special Counsel obtain any sealed indictments that have yet to be made public."

Those words lifted the weight of possible prosecution off Caputo's shoulders, even though it's never been entirely clear that he was ever suspected of any wrongdoing.

"I had been reassured at the beginning to the very end that I've been nothing more than a witness," Caputo said. "But in in a criminal investigation environment, a mere witness could become a target in the blink of an eye. So you always you go to bed every night under threat, whether you're a witness, a subject or a target. It's the same threat."

Caputo worked for the Trump campaign from November 2015 through June 2016.

And while he told congressional investigators in 2017 that he had no contacts with any Russians while working for the campaign, he later amended his testimony to say that a Russian who went by the name Henry Greenberg approached him in 2016, offering "dirt" on Democratic presidential candidate Hillary Clinton. Caputo passed on Greenberg's name to Roger Stone, a self-professed political trickster and Trump ally who was later indicted in the Mueller probe, but not because of his contact with Greenberg.

Caputo said he simply forgot about the contact with Greenberg -- and said after it was revealed that it appeared to be an "FBI sting" aimed at ensnaring him.

"They asked me about all my friends," Caputo said at the time. "It's a frightening thing."

Caputo has also testified privately before committees on both sides of Capitol Hill. And earlier this month, Vacco sent a letter to the House Judiciary Committee, saying Caputo won't cooperate with that Democrat-led panel's burgeoning probe of Russian interference in the 2016 campaign.

Both Caputo and Vacco said Mueller's report – and the fact that it found no collusion between the Trump campaign and any Russians – proves their point that there's no need for Caputo to cooperate with the Judiciary Committee.

Caputo said the investigations have severely damaged his consulting business and put an extraordinary emotional burden on his family.

"We've had our lives on pause for years, and we just want to press play again," he said.

Caputo said he hopes that Barr releases as much of the Mueller report as possible, just to further offer vindication to the many people who were interviewed and seen as possible suspects even though they never did anything wrong.

And on that point, Caputo agrees with Senate Minority Leader Charles E. Schumer, a New York Democrat, and House Speaker Nancy Pelosi, who also called for release of the full report.

"Congress requires the full report and the underlying documents so that the Committees can proceed with their independent work, including oversight and legislating to address any issues the Mueller report may raise," Schumer and Pelosi said in a statement.

Rep. Brian Higgins, a Buffalo Democrat, also called for release of the full Mueller report. He noted that while the Mueller probe found no collusion between the Trump campaign and the Russians who were working to influence the 2016 election, the investigation did result in the indictment of 34 people, including five Trump associates.

"There's no collusion, but lots of corruption," Higgins noted.