Leonel Rosario closed his restaurant early for his private tasting dinner. Around the table, guests boisterously talk business and family over plates of experimental Oaxacan food that would soon join his new menu. This latest menu update infuses more authentic food to Rosario's broad repertoire, one that pleases both traditional Mexican-connoisseurs and picky cheese-quesadilla-only eaters.

He begins the five-course meal with a toast. Each diner raises a wooden chute of smokey, clear liquor and Rosario cheers to friendship and family, his eyes welling with tears. "Mi casa, su casa," he said.

A decade ago, a scene like this in Medina -- young restaurateurs gathering around a table to taste test another's new experimental menu -- was perhaps the pipe dream of someone who desired a more exciting hometown. However, within the past few years, the architecturally rich village welcomed back young entrepreneurs with open arms, accelerating a bubbling multifaceted culinary and cultural renaissance.

It's a familiar feeling for those who have watched Buffalo gain momentum over the past decade. Restaurants and bars popping up across the city were the kinds with living walls, exploratory small plates and baroque cocktails that larger cities have had for years. Buffalo’s brain drain slowed and the city became a “magnet for Millennials.” People outside of Buffalo paid attention, writing that “Millennials are moving to Buffalo & living like kings.”

Though Buffalo has its ample share of hurdles to maneuver and economic growing pains to avoid, the city booms with a newfound food-and-drink pride not solely rooted in chicken wings and beef on weck, with just a hint of “I told you so all along.”

Outside the city, about an hour deep into farmland that bumps into the Erie Canal, Medina followed a similar timeline. To scale, of course, with its population of 6,000.

Fifteen years ago, downtown Medina looked a lot like this: Blissett’s, a prom and wedding dress store, stood on the corner. You could get pizza at Avanti’s and a classic diner breakfast at Rudy’s. Immerse yourself in a book (and smell of freshly grounded coffee beans) at The Book Shoppe. Drink a cheap beer at O’Brien’s. Vacant storefronts wove between shops.

Steadfast businesses held the small town up by its bootstraps. Residents had plenty to be proud of, namely the Erie Canal, century-old sandstones and a fairly steady industrial economy. But compared to today’s Medina, it was as barren as the fields you’ll drive through to get there.

“You can be proud to be from Medina and go home at night to Medina, but you were going to Buffalo to spend your money,” said blogger Alix Gilman, co-owner of a local coffee and cocktail bar.

Gilman and her husband, Scott Robinson, are two of the several Millennials who grew up in the village, moved away after school and found their way back, opening businesses.

The couple lived in Washington D.C. for several years, Gilman as a teacher and Robinson as a political consultant. But their distant dream of opening a cocktail bar was nothing more than that: a daydream not grounded in reality. “The rent down there would be so incredibly high that it wouldn’t be possible,” Robinson said.

“Moving back home made the dream happen,” Robinson said.

Through their blog, In A D.C. Minute, which they began in D.C. and continued when they moved home, they draw visitors to Medina, championing its food-and-drink renaissance. Local blogs such as Buffalovebirds, Nickel City Pretty, Succulents and Sunnies and Step Out Buffalo have all recently visited and written about Medina at the invitations and recommended itineraries of Robinson and Gilman.

More recently, Mile 303, a modern fine dining and craft cocktails spot with an Erie Canal-inspired bar, was opened by husband and wife Tim Hungerford and Teresa Misiti last spring. Both were born and raised in Medina and lived all over the country; Hungerford lived all over the world. When they returned, they bought a place on Main Street, where they live above their restaurant.

Hungerford fell in love with restaurants as a child, but opening Mile 303 wasn't all about the food for him; it was more about blending modernist art, architecture and food in a village and region largely lacking modernity.

When he enlisted his architect brother, Brian Hungerford, to craft the restaurant's design plans, Brian came back with two.

One was traditional. "Tables and chairs," Hungerford said.

Hungerford showed his brother plans for a contemporary space with communal seating, featuring a vibrant, turquoise, three-dimensional, parametrically-derived sculpture of the Erie Canal. 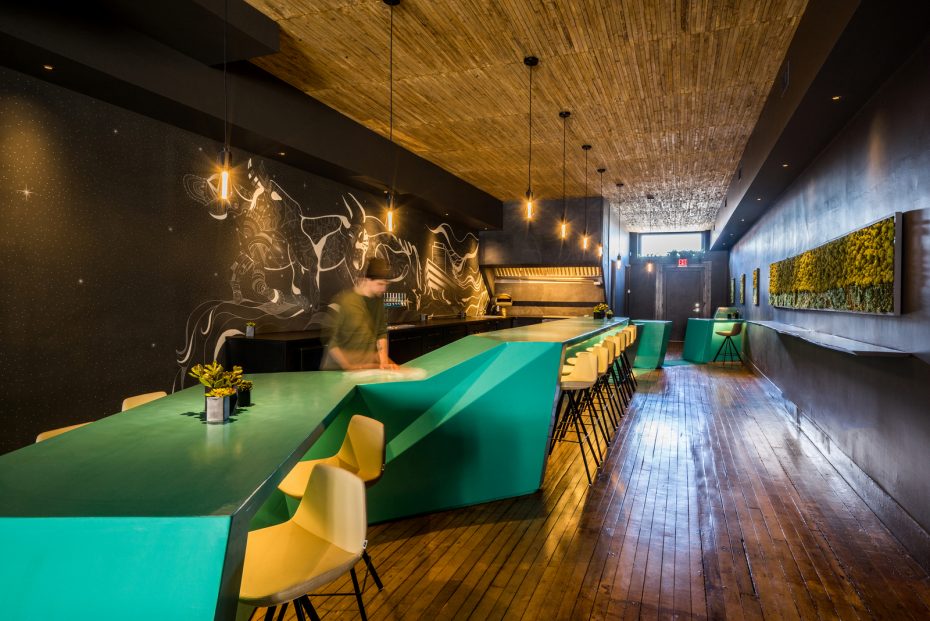 Mile 303's concept is as much about art as it is about food. (Dennis Stierer)

"I don’t know what that is,” Hungerford recalled telling his brother when he first saw it. But he loved it.

The local gut reaction? "This place is weird," Misiti said. "But not, like, in a negative way."

For Hungerford, modern architecture is a "missing fabric" for Western New York. In his own little corner, he's aiming to change that. “We are very much probably pushing the comfort level of most of the local population," Hungerford said. "But inherently and historically, from [Western New York's] peak until now, it's been in a cultural stasis. There’s been that resurgence, which has been so beautiful to see." 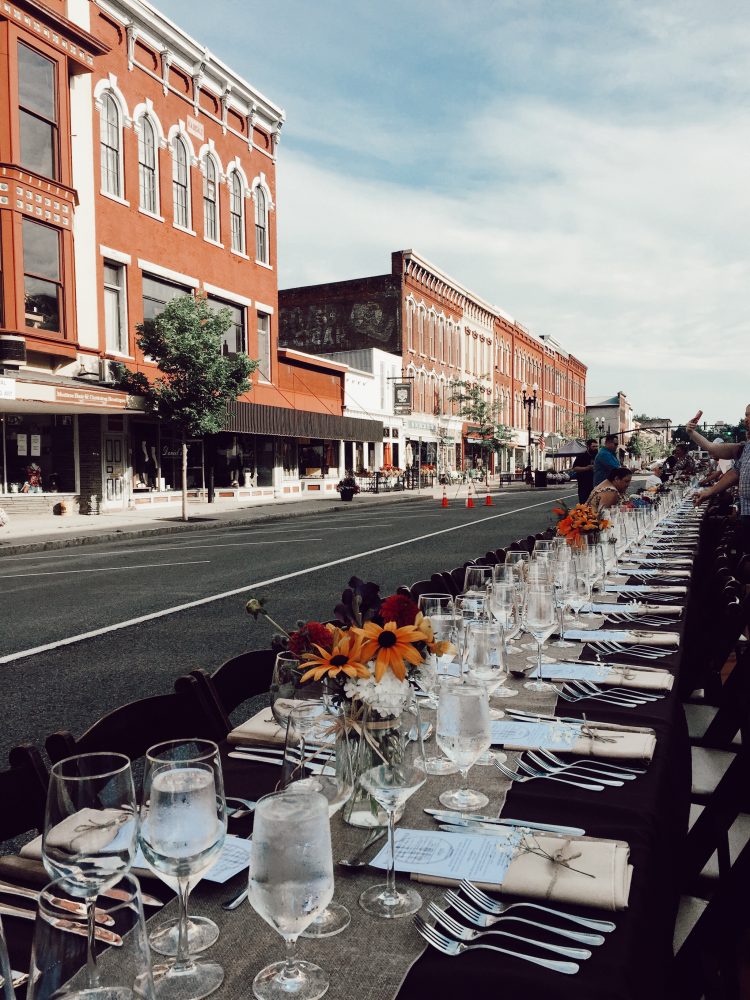 A regional event destination in the making

For the past three summers, the Orleans Renaissance Group has blocked traffic on Main Street for an evening and set up a long, narrow table in the middle of the road for 200 guests to enjoy a farm-to-table dinner.

Last year, local restaurants crafted one of the five courses and wineries along the Niagara Wine Trail provided a pairing for each course. A local floral shop designed late-summer arrangements using sunflowers. As many ingredients as possible come from nearby farms.

The effect is something out of a Hallmark movie. Old architecture, colored in faded tans and reds create the backdrop. Between the regionally-sourced food, flowers and ever-filling wine glasses, it's the kind of event that attracts both farmers and Instagram influencers.

Many towns have their own "Taste of" events and art festivals, but Medina is establishing its own genre of cultural events.

Next spring, Medina will see its biggest recent cultural expansion yet.

Roger Hungerford, a Medina investor and entrepreneur, bought Bent's Opera House in 2016 with plans for a complete restoration.

His plan is simple. He wants the 155-year-old mammoth sandstone to be an architecturally authentic regional event space, where people can eat, sleep and gather, according to Tessa Hartway, marketing at Hungerford's company, Talis Equity. The renovated space will host musicians, weddings and cultural events.

Bent's Opera House was an arts-and-culture hub on Medina's Main Street in the mid-to-late 1800s. The opera house welcomed entertainers such as P.T. Barnum and "Buffalo Bill" Cody inside its extravagant third-floor theater. Negatively affected by the rise of movie theaters, its first floor turned into a pharmacy and a grocery store. Until 2010, it was a Bank of America, Hartway said.

Hungerford's team is currently deep into renovations -- updating the town through frequent social media posts. The first floor will be a farm-to-table restaurant; the second will have 10 boutique hotel rooms. The third-floor auditorium was largely left alone for the past century and a half, so Hungerford is keeping it as true to the original design as possible.

There's always been a pride here

Mike Zambito and his wife, Kara sit near the end of the table.

Twelve years ago, after finishing culinary school in New York City, Zambito moved back home to open his restaurant, Zambistro, at age 23. He was the first in Medina's new culinary wave. Back then, real estate in downtown Medina was easy to purchase said Zambito, whose family also owns a real estate firm. Now, he said, not a single Main Street storefront is available. He's expanding his restaurant soon to include a new rooftop bar and private dining room. 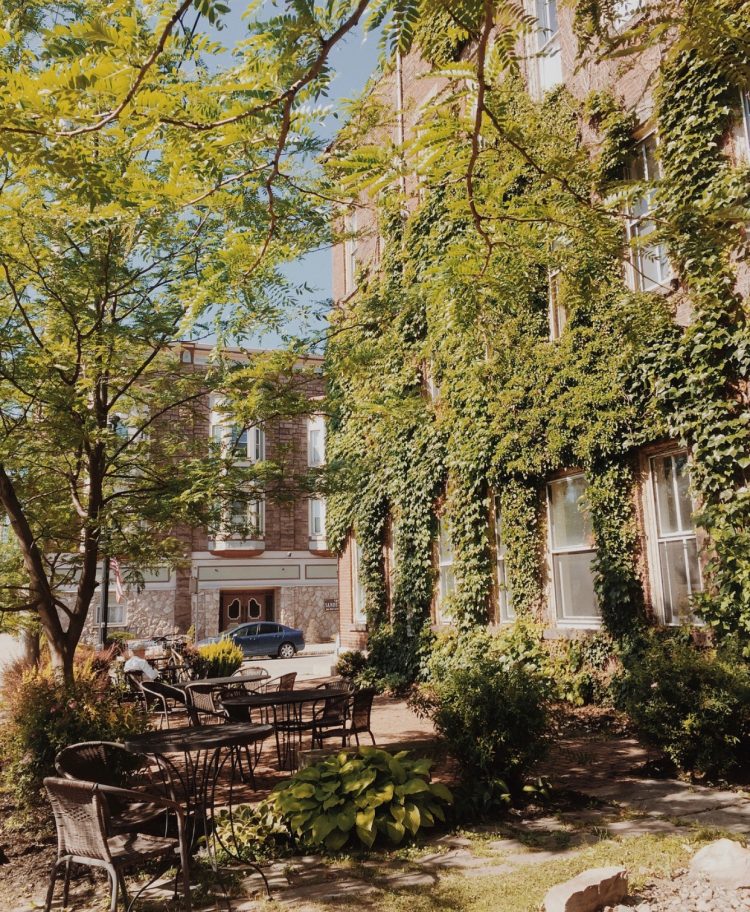 Inside Shirt Factory, Robinson and Gilman preserve Medina's history on the walls. A sepia-toned mural covers the entire back wall, a blown-up photograph of the old shirt factory's staff. Other village artifacts can be found throughout the dining room.

While an influx of youthful expats moved back and brought the small village up-to-speed, there's a proud, traditional backbone that never left.

“There’s always been a pride here, I think,” Gilman said. “We were too young to realize it when we left.”