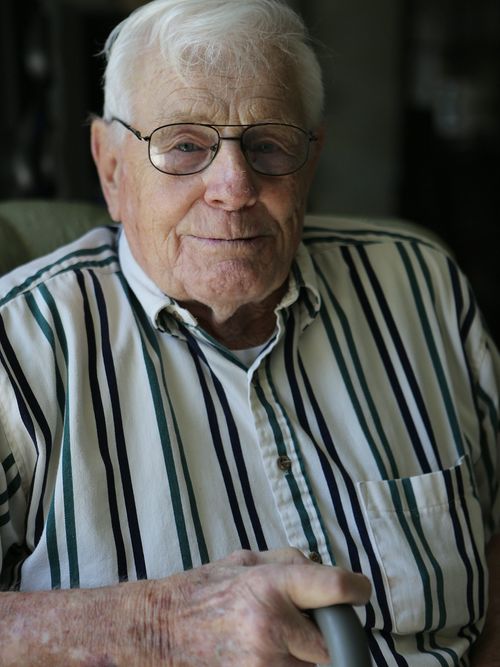 Heinz A. “Dutch” Wolf, a retired Buffalo firefighter, World War II veteran and skiing enthusiast, died March 19 in his Williamsville home. He was 95.

Born in Aulendorf, Germany, he came to Buffalo with his family in 1927.

Talking about his World War II experiences with Buffalo News reporter Lou Michel in 2014, he said he was grateful that his father – who was wounded while serving in the German Army in World War I – decided to come to the United States so that he did not have to grow up in Nazi Germany.

After being drafted for World War II, he volunteered for the Army Air Forces and served in the 8th Air Force in Europe. Assigned to the 350th Squadron, 100th Bomb Group –  the Bloody 100th – he flew more than 30 missions from England over Germany as a waist gunner in a B-17 bomber, often encountering anti-aircraft fire and once surviving a crash landing.

Returning from service, he began an apprenticeship as a plumber and married Dolores “Rita” Heaney in 1946, whom he met at a CYO dance.

He served as a Buffalo firefighter for 23 years at Engine 19 at Forest Avenue and Grant Street. He and his wife also operated Heinz Wolf Plumbing & Heating from their home on Rounds Avenue from 1958 to 1988.

His wife had been a skier since she was a child and Mr. Wolf took up the sport in the late 1940s, first at Chestnut Ridge Park, then on the big hill at Glenwood Acres.

In 1957, he invested in the newly established Holiday Valley ski resort in Ellicottville. He and his wife built a chalet there – the Kinderlof – and served on the Holiday Valley Ski Patrol for 50 years.

They took their family on ski trips out West, primarily to Colorado. They also went skiing in the Alps, in Austria and Switzerland.

When one of their daughters settled in Colorado, they spent springs skiing there after Holiday Valley closed.

They enjoyed taking their granddaughters on road trips, visiting national parks in the West. In 1991, they visited national parks through the U.S. and Canada on a two-month drive to Alaska and back.

A memorial service was held Sunday, March 24, at Holiday Valley in Ellicottville.