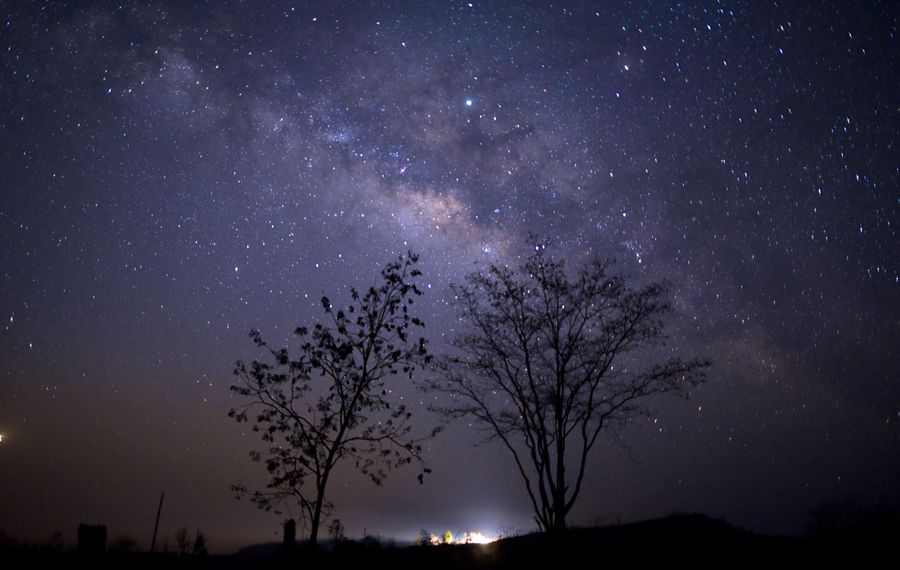 That, my friends, is my version of click bait. I definitely believe there have been thousands, maybe tens of thousands, of sightings of unidentified flying objects.

What led to this essay was a goofy discussion I saw on a Facebook page for my hometown, North Bergen, N.J., just north of Jersey City. Someone had posted newspaper articles about repeated UFO sightings in North Hudson Park there in the '70s, '80s, and even the '90s. North Hudson Park lies directly across the Hudson from Manhattan. I guess it’s possible aliens were trying to decipher sounds made by earthlings who all sounded like Tony Soprano.

Most sightings can be explained. Even so, many sightings have not been explained and remain unidentified.

The logical leap from “that UFO can’t be explained by me or anyone I know, so it MUST be an alien spacecraft!” is not exactly an exercise in logic. It’s not mathematically impossible, but it is emphatically unlikely.

Let’s begin with scales of time and space. This amazing American Museum of Natural History video is definitely worth your time:

The known universe includes the most distant objects we have observed, quasars, viewing them as they appeared 13.8 billion years ago. Light from these quasars took that long to reach our telescopes. If one of them exploded and disappeared 10 billion years ago, we won’t know it for another 3.8 billion years. Beyond that, most galaxies are moving away from one another. The universe is expanding.

When astronomer Carl Sagan was alive, he thought there were hundreds of billions of galaxies. More recent evidence gathered from superior observation technologies now suggest there may be 10 times more galaxies than that. In 2016, deep field images from the Hubble Telescope suggested there may be 2 trillion galaxies. Going with some smoothed data estimates, Cornell astronomer David Kornreich published very approximate numbers cited by Space.com: “Kornreich used a very rough estimate of 10 trillion galaxies in the universe. Multiplying that by the Milky Way's estimated 100 billion stars results in a large number indeed: 1,000,000,000,000,000,000,000,000 stars, or a "1" with 24 zeros after it (1 septillion in the American numbering system; 1 quadrillion in the European system). Kornreich emphasized that number is likely a gross underestimation, as more detailed looks at the universe will show even more galaxies.”

Even assuming the number of stars with planets which might support life would be a much smaller minority, that number must still be very large.

Having looked briefly at scales of time and space, we’ll move to probabilities of extraterrestrial visits to our planet. If the universe is teeming with life, we can look to our closest neighboring galaxy, Andromeda. It’s 2 million light years away, and Andromeda is a larger galaxy with substantially more than the Milky Way’s 100 billion stars. Assuming advanced life is not uncommon in our closest galaxy, why would a civilization in Andromeda travel 2 million light years when other lifeforms would be closer in Andromeda? (All this also assumes interstellar travel at the speed of light is feasible.) We’ll stick with our Milky Way.

Astrophysicist Frank Drake is one of the founders of SETI, the Search for Extraterrestrial Life. He developed what is called the Drake Equation estimating the odds of finding intelligent life in the universe.

Drake is very much an optimist on extraterrestrial life, as was Sagan. However, in a complex screening for what are the minimal requirements for such advanced civilizations to evolve, his most optimistic estimate is the possibility of 50,000 advanced civilizations in the Milky Way. If these civilizations were nicely equidistant from each other, they would be 2,000 light years apart.

How would any extraterrestrials know we are here? Well, they might detect our planet as having an atmosphere and composition which would support life, as we are beginning to do with exoplanets orbiting other stars. But planet Earth would be one of so many other exoplanets to examine; the odds that one had already made such a trip are startlingly low. When you jump ahead to how would extraterrestrials know humans are here, things get really, really tough. City lights almost certainly cannot be observed through interstellar dust. Even if aliens had such observational technology, electric lights didn’t get going until late in the 19th century. A much more likely route for the transmission of evidence of our existence is broadcasting. Broadcast transmissions travel at the speed of light, and our earliest transmissions are now about 100 light years out into space. So those early signals from KDKA radio statistically have another 1,900 years to go to reach such a civilized target.

Suppose the 2,000 light year hypothesis is wrong in our case. Tossing that hypothesis aside, our broadcasts have reached about 15,000 stars. The Planetary Society shows the blue dot in the lower right is the distance covered compared to the Milky Way. At those distances, our broadcast signals become very weak. One physicist postulated listening for such a transmission above the noise of background radiation would be like trying to detect the ripples of a pebble dropped in California waters with a detector in Japan.

Next, you have to ask why would such a civilization expend the vast amounts of energy to visit Earth? Why would they never land and show themselves?

Human hubris makes us think we are really something special, but biology, physics and math make it far more likely we are not so special as we think. Further, the idea we’ve been visited many, many times when such voyages are massive undertakings is ludicrous. Remember, in the past such sightings were occurring almost on a daily basis when flying saucers were all the hysterical rage.

Between nearly all possible civilizations having no clue we exist, and the incredible odds against interstellar travel emanating from a nearby star system, I’m confident aliens have not visited North Bergen. That proportion of UFOs which remain unidentified are just that: unidentified. On the other hand, if alien visits were realistically possible, I might have bought into the swamps out in the Jersey Meadowlands….