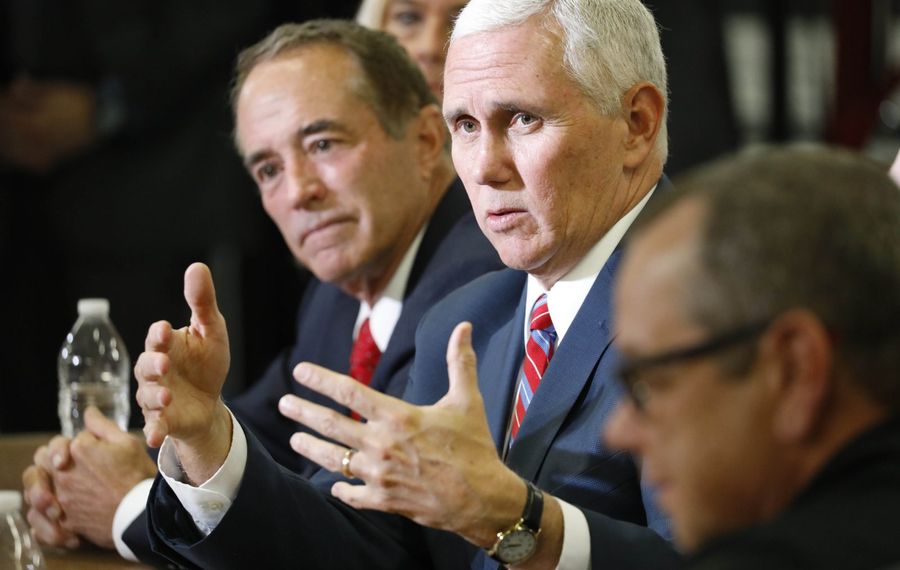 Just as local supporters were ready to drop invitations in the mail, an April 11 fundraiser in Buffalo featuring Vice President Mike Pence has been postponed.

But the event is expected to still take place on a yet to be determined date, according to one of its organizers, Anthony H. Gioia, a retired businessman and former ambassador to Malta who said local organizers were asked to find another date by the Republican National Committee after Pence committed to a United Nations event on the same day.

"We're going to try to get another date," Gioia said.

Rep. Tom Reed, R-Corning, was also serving as one of the organizers, according to three sources involved in planning. Reed maintains strong White House ties and has emerged as one of New York State’s top Republicans. Other planners include Erie County Republican Chairman Nicholas A. Langworthy; Geoff Verhoff, a Washington lobbyist with ties to Western New York; and business executives Kent and Laurie Frey and Jerry Buchheit.

No venue had been selected for the affair, which featured three contributing levels for the general reception, a photo opportunity and dinner with the vice president.

Pence last visited Buffalo in October of 2017 in a daylong swing through the area, including a fundraiser at Salvatore’s Italian Gardens in Lancaster that netted $400,000 for local and national Republicans. He also addressed about 100 supporters and employees of Performance Advantage Co. in Lancaster, which makes equipment mountings for fire trucks, the military and industry.

At the time, the vice president was encouraging a host of changes in the nation’s tax system – most of which were passed by Congress and signed into law by President Trump.

The 2017 event was mainly orchestrated by Rep. Chris Collins, R-Clarence, though it is not known if he will have any connection to the April fundraiser.

Whatever site is chosen for the event, it is expected to attract supporters of the administration from throughout the state. Gioia has extensive experience in staging Buffalo fundraisers for major GOP figures such as former Sen. Alfonse M. D’Amato, former Gov. George E. Pataki, former New York Mayor Rudy Giuliani and presidential candidates like John McCain and Mitt Romney.

Langworthy is also emerging as a major Republican figure in New York as he seeks the party chairmanship, while others on the organizing committee have also gained extensive fundraising experience.