Why can’t we see more of Lawrence Pilut?

The short answer is that Pilut, at least right now, is pliable. The 23-year-old is on a two-way contract in his first professional season, and has spent most of it bouncing back and forth between Buffalo and Rochester.

I think it’s reasonably fair to say that Pilut has been victimized by a numbers game – the Sabres have nine defenders signed to professional contracts, and only two (Pilut and superstar Rasmus Dahlin) are on their entry-level contracts.

But there are two issues with Pilut’s usage this year:

One, he’s largely outperformed the majority of Sabres defenders on the roster, which means Buffalo has either accepted that his waiver exemption is more valuable than his play, or they don’t think he’s NHL ready just yet. (More on this in a minute.)

Two, the Sabres have this same contracts issue on the blue line come 2019-20. When they take care of restricted free agent Jake McCabe, they will have the same nine defenders at their disposal, and the same two defenders – effectively one when you eliminate Dahlin’s candidacy – with waiver exemptions.

I want to focus on the first point a bit more here, especially since the Sabres recalled Pilut on Sunday because of injuries on the blue line. When he has been an NHL regular – largely during January and February – he’s been used as more of a depth defender, insulated by Rasmus Ristolainen, Zach Bogosian, Dahlin and McCabe:

If you are following the trends of Brandon Montour’s usage since his acquisition at the trade deadline, you effectively have one more body pushing Pilut down the lineup. So even when given the chance to compete at the NHL level, Pilut’s really been given a limited role – one that sees him easing into things in the third pairing.

The interesting piece here is that there really isn’t a lot of evidence that Pilut has been outplayed by many (any?) of the names that are insulating him, so to speak.

But we still have humans making decisions, and there are an awful lot of reasons why a coaching staff might or might not prefer a certain player. (Some of those reasons are surely more meaningful and valuable than others.)

If you are a coaching staff in the midst of a postmortem for an underperforming team, one of the more compelling arguments you can make is that you were not afforded with enough talent to meet an overarching end goal – be it a postseason berth, a deep playoff run or the Stanley Cup.

That’s never been true on the Buffalo blue line, which is part of the problem. The team’s most utilized defender has historically been a drag on performance, which is something you rarely see on other competitive NHL teams.

But you also have inefficiencies further down the lineup, like the case with Pilut.

Again, some of these are more sheltered minutes in nature, but plenty of other Sabres defenders have seen similarly sheltered usage and with less overall success: 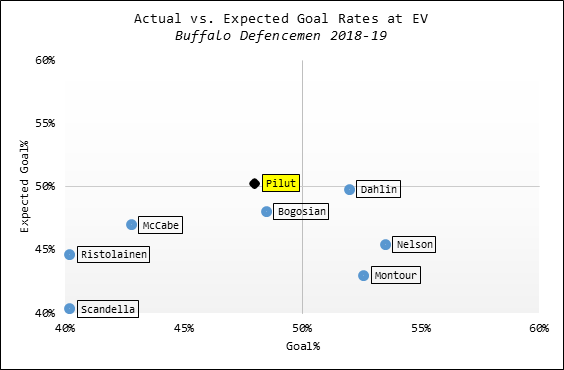 Blind to goaltending performance, you can see only two Sabres skaters are expected to break even in terms of on-ice goal differential. That’s the two waiver exempt players on entry-level contracts in Dahlin and Pilut.

The only differentiator between the two, in fact, is that Sabres goaltenders have simply stopped more shots behind Dahlin than Pilut. (Pilut’s on-ice save percentage is almost two percentage points worse than Dahlin’s this season.)

Even bringing in goaltending performance, you can see that plenty of Sabres skaters – including McCabe, Ristolainen, and Scandella – have seen much worse on-ice goal differentials this season. And all three see more opportunity than Pilut.

What do we conclude? Pilut, even in 25 games, has been a positive influence on the Sabres' performance – arguably more so on a per-minute basis than any Sabres defender not named Dahlin.

The lone counterargument? Pilut realized most of these successful minutes because he’s further down the lineup and playing against weaker competition. That’s why it’s critical the Sabres stress test Pilut at some point in the not-so-distant future.

The good news is the Sabres have eight completely meaningless regular-season games left to test Pilut’s candidacy. They should use those games to get a better understanding of what they do and don’t have as they head into a critical offseason.